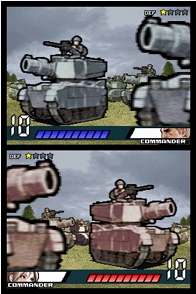 That's probably why so many modern video games are so easy — people just don't like to lose. Losing, however, is an integral part of the learning experience in Advance Wars, the turn-based strategy series that started on the Gameboy Advance and has since moved over to the DS. Advance Wars: Days of Ruin on the DS follows a ragtag group of soldiers in a post-apocalyptic world as they fight back raiders and other nasty enemies. Between the thematically dark main missions (which are uncharacteristic for the Advance Wars series) the player can also tackle "Trial Missions," which are much more difficult and usually feature specific gimmicks in the arrangement of the terrain and/or units.

One such mission, T35 or "Center River," uses the Fog of War mechanic, which obscures enemies a certain distance away from the player, thus making it difficult to react to the opponent's moves. Like, really difficult.

Case in point: I deployed some footsoldiers, captured a few cities, and set up a tank or two. BOOM, out of nowhere the enemy started bombarding me with rockets and artillery shells from ... somewhere in the Fog of War. Then giant "war tanks" (the most powerful land units in the game) emerged from the fog, barrelling down upon my base and supporting the infantry units that would eventually overtake my headquarters.

Every permutation of moves I tried, every strategy, met with defeat. The most frustrating times were the ones when I felt like I was about to win, only to be struck down by a surprise volley of long-range rockets and anti-tank attacks that drove me back to my base! I simply turned the game off in anger quite a few times.

I searched online for ways to beat the mission, to drive into the heart of the blue team's side of the river and take their HQ. Forum posts provided some nice tips, but my lack of Advance Wars experience made it difficult to fully implement a lot of their strategies. The parade of failures continued. 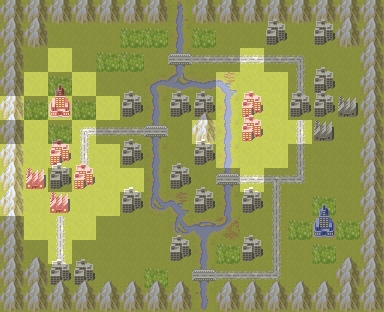 One more time. One more time. I sent troops across the river and tried to take the island in the center. I set up rockets in major cities. I pushed across the southern bridge with a tank. After dozens of attempts these sorts of things had become second nature. The enemy came at me on the island, and then I made the one important change to my strategy: I sent some decoy troops along the northern bridge, as someone had suggested in a forum post. Instantly the CPU redirected its troops to fight in the north, and my campaign to take the island in earnest had begun.

After over an hour of plugging away at this slow fight, producing units constantly to keep up with the enemy's barrage of attacks, I finally made it across the southern bridge. By redirecting the blue team back and forth with false threats of capturing cities, I managed to sneak an infantry unit into the headquarters and capture it once and for all. A week of frustration and anger and failure ended in glorious victory, and I was reminded of why I dedicated so much of my time to something so frustrating.

Snapshots is a monthly column here at Ani-Gamers in which one of our writers describes and analyzes a particular moment from a piece of media. To read previous entries, click here.