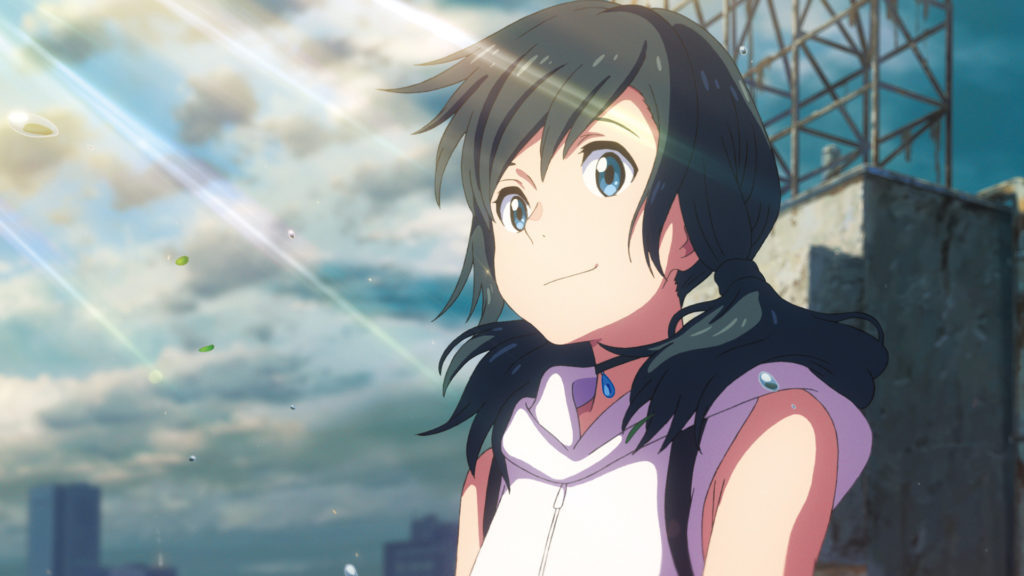 Making the follow-up to a record-smashing film like your name. cannot be an enviable task. I can only imagine the pressure put on director Makoto Shinkai as he set out to produce Weathering with You, his latest anime film — flanked, no doubt, by producers hungry for the next blockbuster hit. And color me unsurprised when the result is a colossal mess, a movie clutching desperately at the ambition and vision that made your name. a success.

Shinkai has always been stronger at depicting the far-off longing of distant souls than true one-on-one interactions between characters.

In Weathering with You, Shinkai returns to his two favorite subjects: star-crossed teenage lovers and clouds. The boy this time is high schooler Hodaka, who runs away from his island hometown to seek out a better life in Tokyo only to find the megalopolis beset by a seemingly unending rainstorm. On top of that, finding a job and lodging proves difficult until he gets taken in by a shady writer who puts Hodaka to work researching Tokyo‘s many urban legends. That leads him to our heroine, Hina — a girl with the ability to control the weather. The pair start using Hina’s power to clear the rain for people, but it soon becomes apparent that her ability isn’t all sunshine and rainbows. There are dire consequences for those granted this rare power. 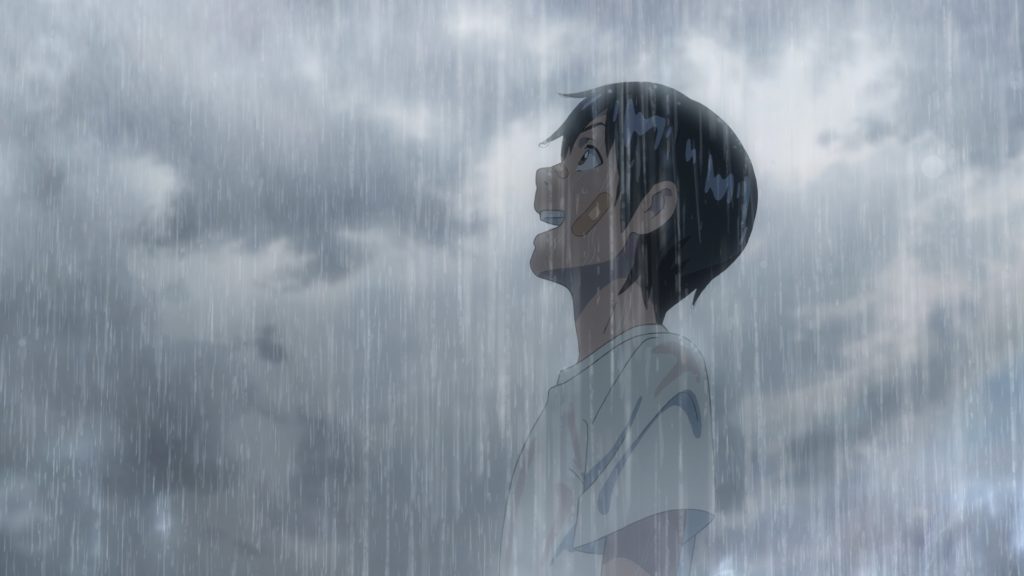 Like your name., Weathering with You has a lot of initial charm to it. The first half hour is full of cute comedic episodes as Hodaka begins his new life in Tokyo and gets to know Hina. Hina’s little brother, an elementary school playboy who spends the entire story surrounded by female admirers, is a particularly unique and hilarious addition. The problem is that, dramatically, Shinkai has always been stronger at depicting the far-off longing of distant souls than true one-on-one interactions between characters. The more time we spend with Hodaka and Hina, and the more situations and subplots Shinkai puts them in, the more it becomes clear that they are barely fleshed out paper cutouts. They exist solely to slot into the dramatic climax of the movie in which Hodaka must move heaven and earth (almost literally) to reunite with Hina. Neither goes through any significant internal character arc in the process.

While I enjoyed your name. overall, I wasn’t a fan of its final two acts, which pack in a series of twists and turns that make the movie’s message feel disjointed. However, for all its messiness, your name. attempts to make a statement about the disappearance of traditional Japanese rural life due to migration and natural disasters. Weathering with You benefits from a lack of those massive swerves, and yet it has almost nothing to say (some critics have claimed it has a climate change message, but you have to do a lot of gymnastics to get there). To make matters worse, Shinkai seemingly can’t make up his mind about where the movie should sit in terms of tone and pacing. There are slapstick comedy scenes sandwiching a bleak and incongruous subplot about contraband firearms. There are somber, introspective scenes punctuated by music-video-styled montages set to blaring Radwimps pop songs. 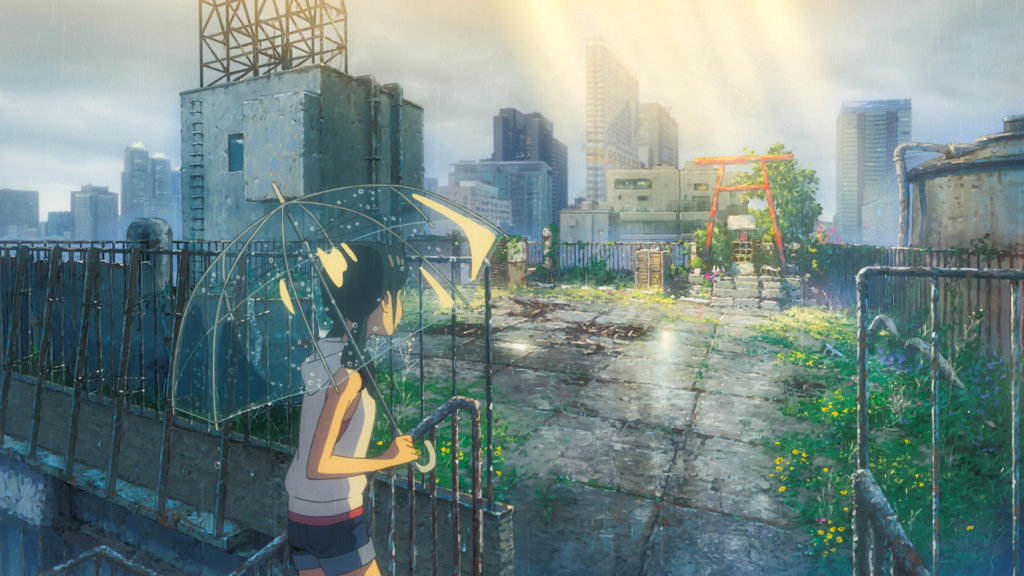 The background work is some of the best in Shinkai’s filmography, full of impossibly detailed city streets and signage adorned with fully accurate text and logos.

As always, the silver lining is the breathtaking production. The background art is supervised by Hiroshi Takiguchi, who has experience immaculately recreating the scenery of Tokyo with Shinkai on Garden of Words and transforming live photography into naturalistic backgrounds on The Case of Hana and Alice. The resulting background work is some of the best in Shinkai’s filmography, full of impossibly detailed city streets and signage adorned with fully accurate text and logos (rare in anime, since many shows modify logos to avoid copyright concerns). Naturally, weather effects including clouds and rain feature heavily in the movie — depicted with the hyperreal, high-dynamic-range style for which Shinkai is so renowned. The characters, once again designed by AnoHana’s Masayoshi Tanaka, have the unremarkable attractiveness of much of his work and are brought to life with beautiful acting under the supervision of Ghibli veteran Atsushi Tamura. In the early scenes, when Weathering with You is still just a fun romp through Tokyo, the expressive character animation makes for compulsive viewing. 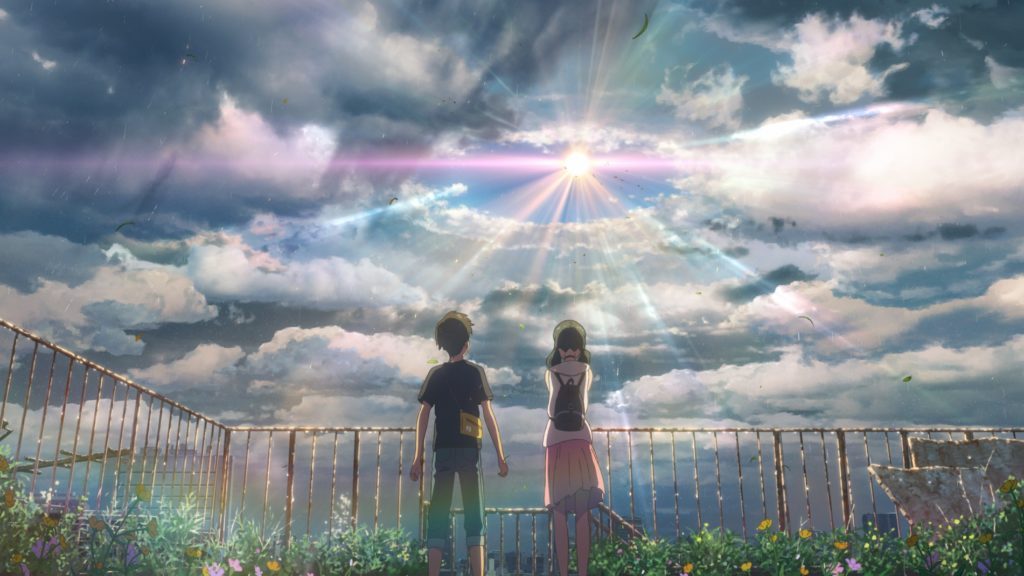 Still, through it all there is a sense that Shinkai is out of his element, trapped by his own success. His best work — the long train ride in 5 Centimeters per Second, the eerie silence of the cockpit in Voices of a Distant Star — is small and quiet, but his status as Japan’s most in-demand director rests on a movie that’s much bigger and louder. The audience that now walks into the theater for a Makoto Shinkai movie is looking for more ambition, more melodrama, more elaborate effects, and less of the challenging, sometimes depressing drama of his early work. But Shinkai isn’t a jack-of-all trades. He’s not cut out for pumping out the kind of populist film that pleases everyone at once. When he tries to stretch himself thin enough to do it, we get Weathering with You, a film that does a disservice to its immensely talented creator.

This review is based on a theatrical screening.