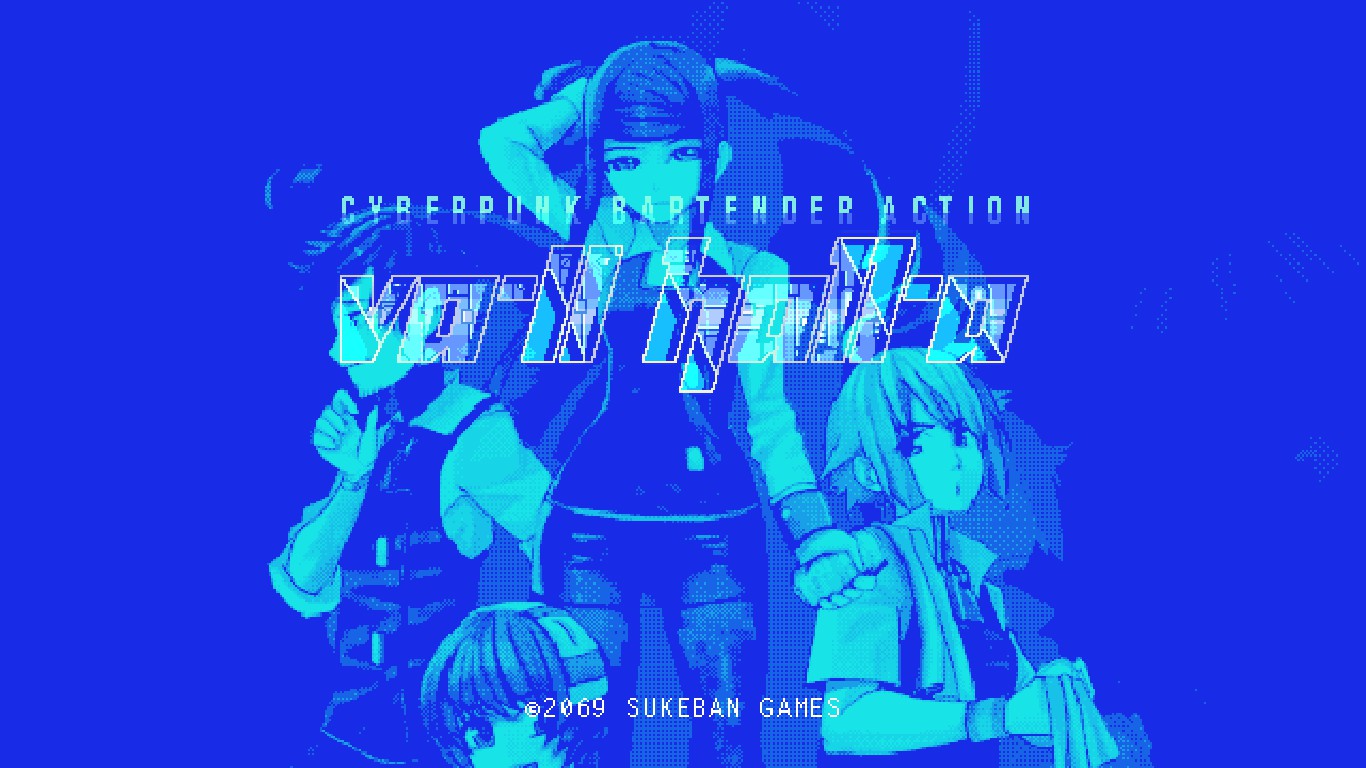 A city where it's always night, on the fringes of the world, a melting pot of all forms of life, organic and artificial. Polluted with nanomachines, overrun with corruption. No one blinks at the sound of gunshots in the street. It's a familiar place for anyone that's read enough science-fiction novels, a dismal setting that we come back to again and again, seen through the eyes of hard-boiled detectives and cold-blooded assassins. As real life grows more complicated, with drones blowing up civilians and Alternate Reality games driving people off cliffs, it's refreshing to see the usual prophetic images of our stupid and brutal future through the lens of someone a bit more normal, someone with real, relatable concerns like us in these unreal times.

VA-11 Hall-A starts out like a joke that runs the risk of going on for 12 hours too long, like something that started out as a rough idea posted on an imageboard at some strange hour of the morning, when all the weirdos with a genuine appreciation for the  a e s t h e t i c  meme are awake. Development snowballed from there and the result is “Cyberpunk Bartending Action.” That's the visual novel's tagline and it commits to the gimmick from start to finish, placing readers behind the bar of a dodgy dive. VA-11 Hall-A is presented like some sort of long-lost Sega Saturn text adventure, even down to the interface and optional scanlines. Customers come to the bar, you put their order into the mixing station, stories are shared and tips are earned based on how well you serve. Take a smoke break, reload the jukebox, and keep mixing drinks until closing time. Put in good work everyday, budget your income wisely, and you might just be able to pay the rent. 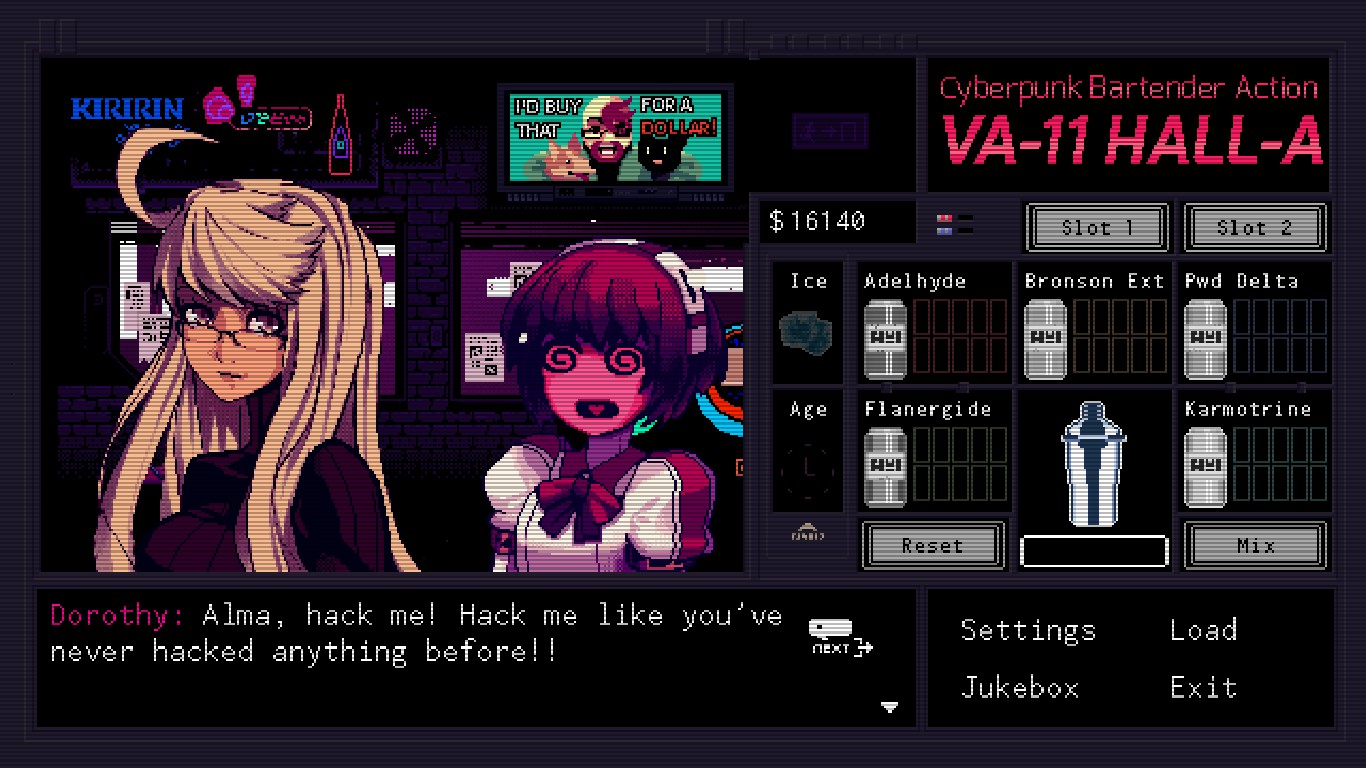 Beyond the concepts, visual novels live and die by the text. The medium gets a highly-deserved bad rap for dense stories with the mental nutrition of a box of Tic-Tacs, buoying the crap, mistranslated writing by playing to an audience that subsists on anime titties and lurid high school gym locker fantasies. VA-11 Hall-A is born from the same filth, and yet the writing comes through like a gut punch, sharper than its fellow original English visual novels and swifter than the cumbersome Japanese titles everyone exalts. On the surface, the script stitches together a smattering of meme humor for flavor, with deep cuts in everything from pro wrestling to erotic manga. I was worried it would eventually devolve into wacky reference comedy, but thankfully the writers are more clever than that and keep the references as nothing more than nods and winks. Some of the less brilliant stuff like the talking dogs operate more like a swerve, especially when it's bookending conversations on the legality of concealed weapons for androids and the impracticality of participating in an orgy. The story meanders through subject matter that larger novels contrive to build a grand thesis on, and before we can get into the weeds, the client has finished their drink and changes the topic. 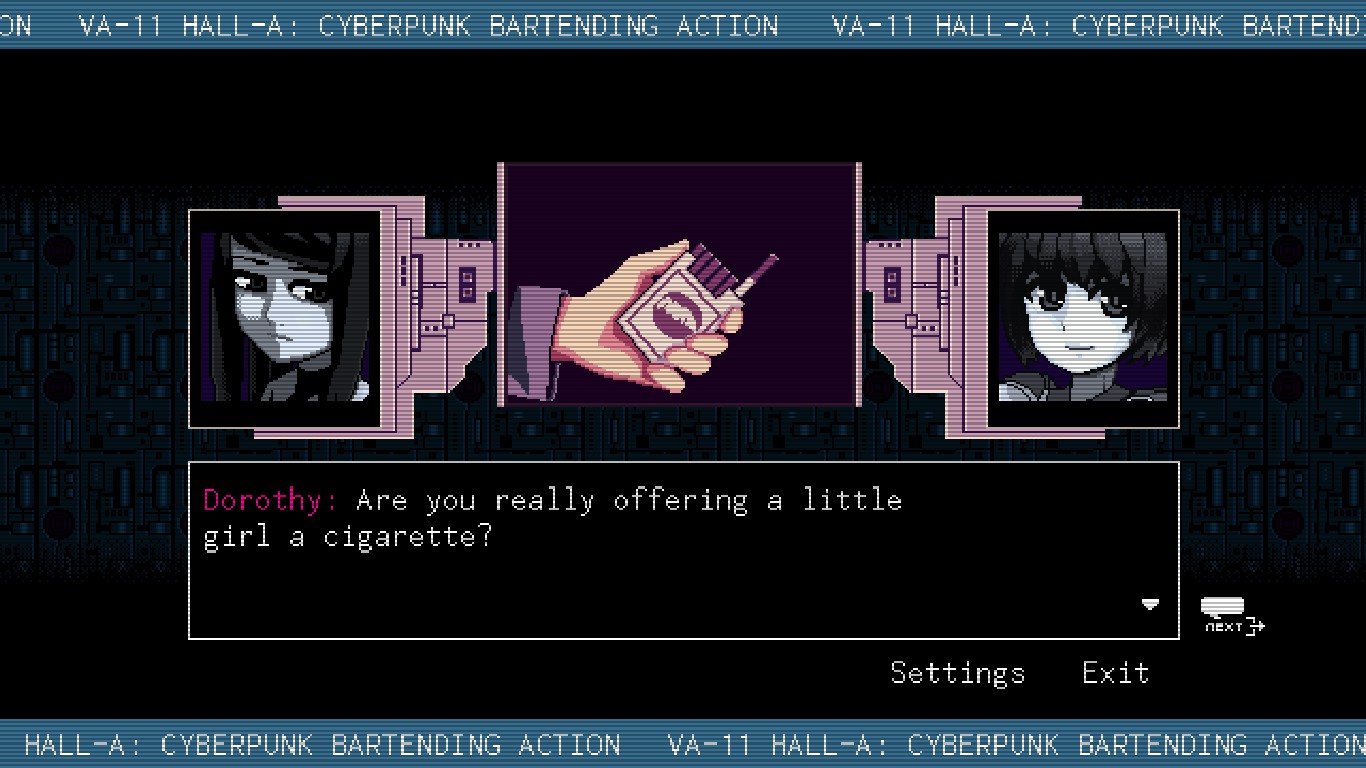 The lubricant nature of alcohol makes for a versatile narrative, and to echo some complaints I have with smaller games, sometimes I wish we could dwell a little longer on certain moments. Grounding the story to a fixed amount of time not longer than a month, seen through the perspective of a tough, cool-headed bartender, I can't help but feel dazed when the dialogue breezes through some interesting implications on its established world, and then the characters simply shrug and go "that's life." Maybe that's where the story feels real, in a way, where scores of people die off-screen and no one flinches. Details like these, passive reactions to events that no one can do anything about, do a lot to make the characters believable. They deal with a compounding sense of dread by finding reprieve at the bottom of a glass. No one takes up arms, no one rallies out in the streets. Everyone has reasons for behaving the way they do. The feeling of being trapped takes many forms for everyone in the story, and this is where VA-11 Hall-A strikes gold, achieving adult storytelling in an interactive medium with just a handful of empathetic characters in a beer-soaked hole in the wall.

I believe the gamers are used to not giving a shit about characters, and anyone following the visual novel scene has at some point in their life considered reading an actual book, so it's a good feeling to come across a character-driven visual novel that excels in its own lane. There's a generation of emerging writers that might be our best bet at exorcising the ghost of Cool Japan (c. 2006). Today, we're seeing better writing and less derivative scenarios. Regardless of how the recent VN boom on digital distribution platforms plays out, the medium has grown and stands to grow some more as time goes on. While few titles in the Western visual novel market are as unique and readable as VA-11 Hall-A, at least I can say for sure that we're out of the dumpster fire of years past now.