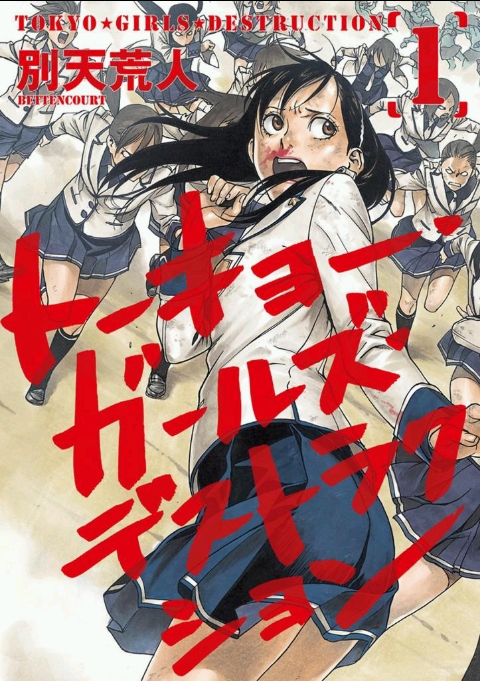 I love open and shut alternate universe stories. You know, the ones where something that couldn’t happen in real life is a commonplace idea, like warp drive, honest politicians, or Crystal Pepsi. There’s always an explanation as to why the world is the way it is and we’re into the story, no fuss, no muss. The ordinary stories are the ones that backtrack halfway through and try find a commonality. The good ones keep going and for no rational reason, flip the crazy switch and floor it. Case in point, Tokyo Girls Destruction, by BETTEN Court.

In the exclusive island school, The Amazon Academy, Kumi Amesu comes to join its elite ranks. Well, that’s her cover story. In reality, she wants to find out why her older sister, Towa, died while attending the same school. On her first day, everything seems great, if a little austere. Then school finishes for the day.

And the night comes.

To say things take a turn for the worst is an understatement. All the school’s students begins fighting each other for the little school badges all new students get on their first day. Also, when I say fighting, I mean the “pick up whatever the hell you want that’s lying around and use that as a weapon” style of fighting. While nobody explicitly states it, the implication is that Kumi’s sister bucked against the system and, as the song says, “the law won.” I can’t explain how nutty things become for Kumi. One minute the girl who was introducing her to the faculty is chatting to her, the next Kumi is fighting for her life against her. The hook in this story is that if you lose your badge, you lose your basic civil rights and amenities: no room, no new clothes, and you have to clean up the destruction from the previous night’s fighting before the next day’s classes. You thought your school was tough!

Add to the mix a mysterious girl, Sachiko Burai, who is locked in solitary confinement for rules violations and who was friends with Kumi’s sister. Kumi eventually starts her to trust her and it’s like unleashing a female version of Jean Claude Van Damme on the student body. She dresses, ahem, lightly, doesn’t go to class, and spends her time being chased by, and fighting with, the homeroom teacher’s goon squad. There’s also something going on with the teachers, who you would imagine wield the power, and the student council, who hold the real power in the school. Again, it’s never said but it seems the council tolerates the teachers' excesses. 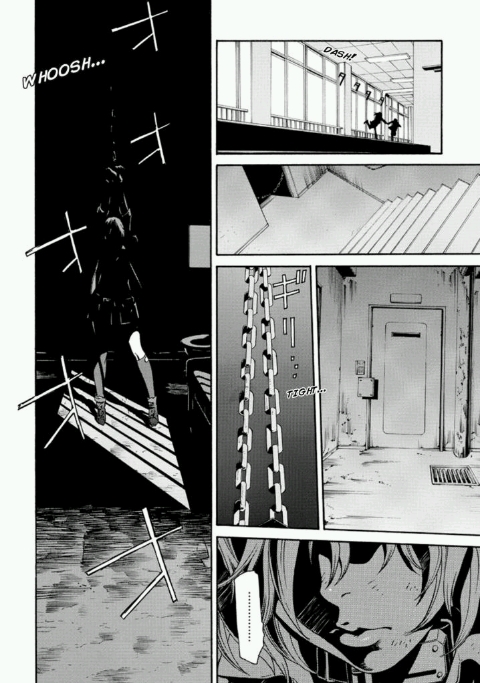 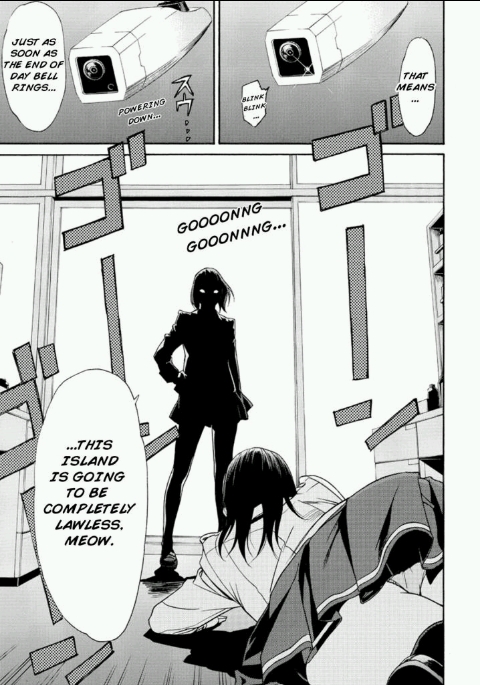 The story takes elements from Richard Connell’s The Most Dangerous Game and some from Schwarzenegger’s The Running Man, turns them around and takes them in an all-female direction.

Some things in this story seems to have their origins in other stories. The homeroom teacher is straight out of a Go Nagai school manga, from her out of control speeches to her goon squad and her schemes. The fighting angle seems to be an unarmed version of Battle Royale but with less death. I’m not saying it’s a ripoff of these stories but they are more like nice references. For example, the story takes elements from Richard Connell’s The Most Dangerous Game and some from Schwarzenegger’s The Running Man, turns them around and takes them in an all-female direction, showing that girls are just as vicious at meting out pain and hardship as men are. And no, I don’t think it’s meant as pure social commentary here. The faux-mustachio twirling of the teacher puts paid to that. I like that the author implicitly states at the start that the government, who are all women, know what goes on at the academy and won’t be sending in a chopper to rescue anyone. Kumi is on her own. 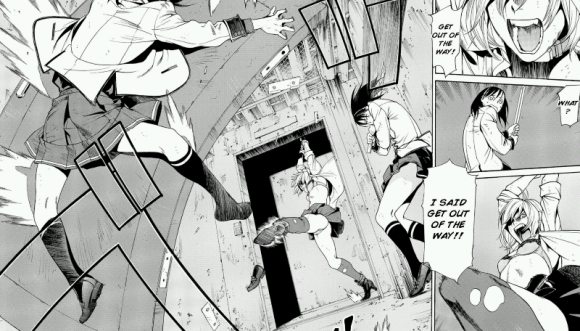 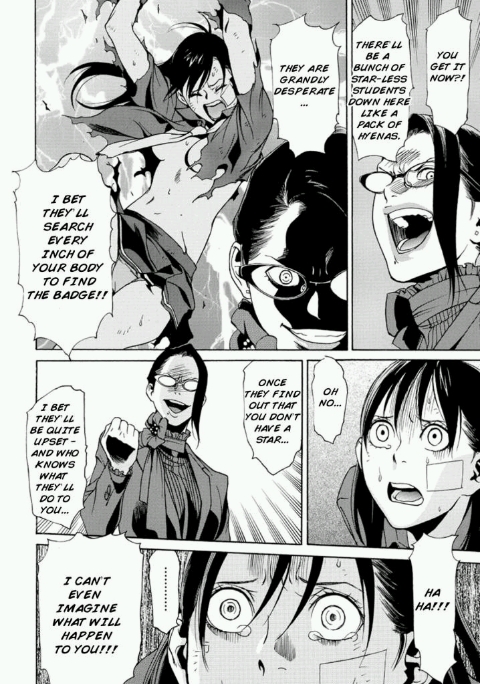 Kumi is a solid character and understandably struggles initially to fight her corner, so to speak. But once she understands the school's twisted rules, she turns it to her favor, and when she gains Sachiko as an ally the dynamic of the characters starts to change, setting them off like pool balls against the plot's borders. The story itself seems to take the hardships of teenagers and adolescents in school and second-level education and multiplies them a thousand fold. Things like those pesky social cliques suddenly become lethal. The people you’re meant to trust, you can’t. If you've ever wanted a literal embodiment of the notion that in school you’ve gotta fight your ground or someone will try and take it away, this is it.

Where the volume shines the most is the plotting amongst the factions in the school. The teachers (here the example is the homeroom teacher) should have all the power, but against the student council, they come across as craven. The council, represented by a bespecled (though she's got an eye patch underneath these!) girl, seems to holding all the cards. Kumi literally has the whole deck stacked against her from the get-go. So we the readers know half the story while she knows none of it. There's a point in each chapter where we are given just enough information and then the author pulls the crazy lever and lets fly with everything.

I find myself marvelling at how much BETTEN Court is piling onto this story. The teachers are crazy, the students are crazy, hell even Kumi's backup looks to be crazy! We are being bamboozled by each setup. Only repeat readings allow you to see the plotting going on and the fact that Kumi is just trying to get justice for her sister. Even after being curled on the floor, spitting out teeth, she still carries forward. For the most part, in explotiation, the heroine has to defend herself against men. Here, all her enemies are women. There are no sisterly bonds here, no circle of friends. The world is hell and she is its only visitor. It turns the story from being crazy AND sleazy to being crazy and crafty.

In the final analysis, Tokyo Girl Destruction could fall flat on its arse. Or it could rise and become Ikki Tousen without the all-out sleazy exploitation. Either way, I'm impressed at this first volume.

This review is based on a digital copy purchased on JManga by the reviewer.