Seeing as Phillip just reviewed this title (and I know you read his Trap Door column religiously … or at least you should), I’m going to leave the formal review to him and tackle They Were Eleven a la Ink: overanalyzing one particular aspect (prejudice as related to gender identity) and having fun with possibility. But first, the obligatory backgrounder:

In the distant future, humanity’s exploration of and expansion into space results in alien alliances and a stable, cooperative peace that fosters edification on a galactic scale. Such a prestigious education ensures graduates positions of influence within their respective planet-nations. To be worthy of this opportunity, however, applicants are required to pass a rigorous series of examinations, the last of which is an isolated field test to be completed by groups comprising ten individuals. There’s only one problem: when the ten students of one particular group arrive on their assigned ship, there are eleven of them. 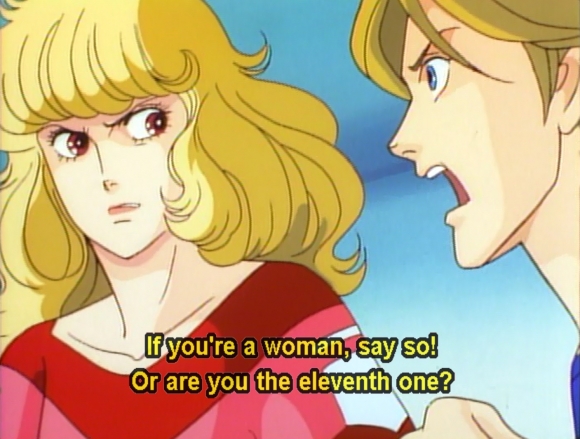 While the immediate and intentional context of this situation is one of intimidation and anxiety brought about by territorial intrusion and presence of the unknown, the latter finds its way into the plot and takes advantage of the title in a much more interesting way: through the prejudices regarding gender identification. This is embodied, pun intended, in Cosmo Academy hopeful Frol, a member of a race whose members are forced to conform to one of two genders at a predetermined age. Frol has yet to reach that age and thus has not been made to ascribe to any particular sex/gender association. Because Frol appears female but identifies as male, the other would-be cadets suspect Frol is untrustworthy and might be the dreaded eleventh. 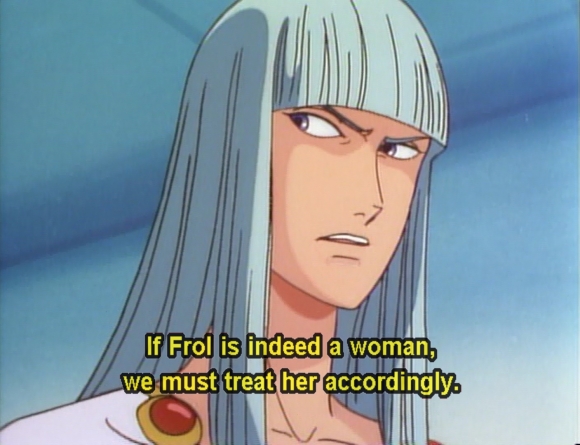 Omitting the fact that there are, in truth, 11 people present, the movie could still be made with 10 characters while keeping the same title if Frol, who is described in dialog as a hermaphrodite, is considered both male and female. The animosity associated with “the eleventh,” then, would be the result of that character’s challenge to cissexual assumption. This is reinforced by the fact that there is one other crew member from a race whose members also develop their sex/gender association later on in life and that said character is the only one who does not immediately harbor suspicions due to Frol’s nature. Since it is not an unknown, there is no fear or suspicion—only possibility: one entity that could be either sex and is therefore both or two. 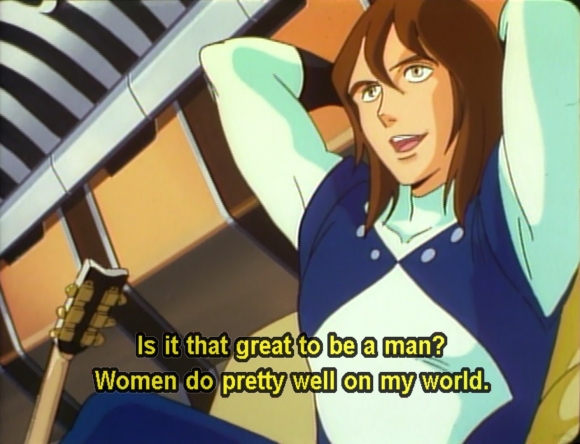 Even if this entire postulation is preposterous given the actual character count, the fact that They Were Eleven deals with sexual association and what that means in society is not. Evidence lies in the main character’s, Tadatos, proposal to Frol—specifically that he’s willing to accept his developed feelings for a person regardless of their gender ambiguity. His actions make the proposal more a statement on the fact that it is the who that matters and not their sex or gender. The sentiment is tainted by the male-as-white knight role, however, as Tadatos is effectively rescuing Frol from an imposed marriage. Further sadness comes from Frol’s offer to remain a woman at the end, because doing do propagates conformance to cisgendered roles. But the actual ending, the fade to black without an answer to Frol’s question from Tadatos, is something worth praise … something oh so smartly not even ruined by the epilogue. 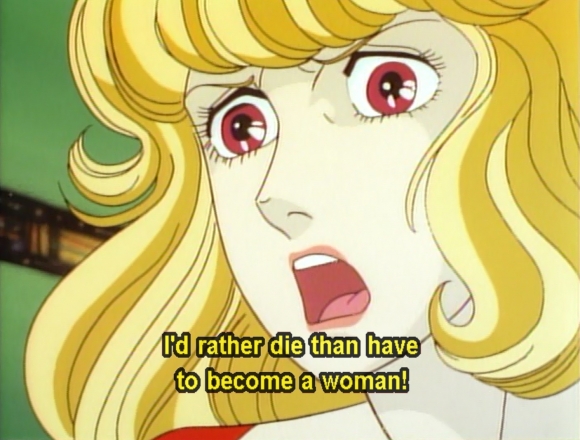 Not unrelated, especially given Frol’s adamant opinion on becoming male as the optimal station in life, is the commentary on the prejudice against women in a so-called age of progress — no doubt meant as an allusion to present day (at the time, 1980's [EDITOR'S NOTE: or the 1970's, when the manga was published]). This harkens back to the initial surprise of the other 10 applicants regarding the assumed presence of a woman at this stage of an infamously difficult test. One crew member actually says (out loud) something to the effect of “even woman are capable of passing the test.” This fact should be taken for granted, but the movie feels the need to expose the character's ignorance. The movie thus makes its point about just how socially integrated sexism is when it comes to academia judging mental acuity. But that’s not all that’s judged, and the cisgendered males aren’t always the one doing the judging. 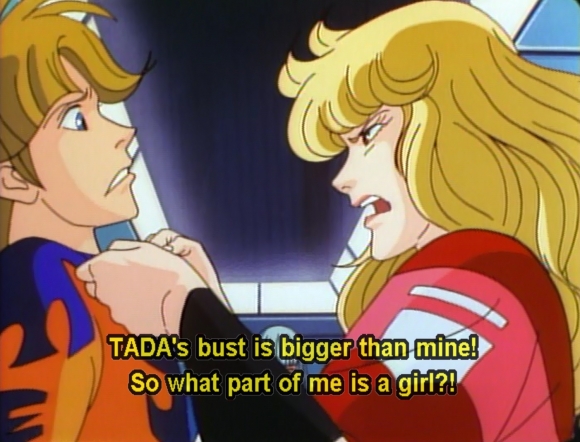 Asides, monologues, and dialogues between the entirely male/male-identified cast reveal early on the perception of females as incompetent eye candy (not aided by Frol’s constant clumsiness, sheepish actions, and emphasized lack of strength),  but Frol — the physical representation of female — also adds to the negative perception of femininity. Frol constantly compares their physical self to that of Tadatos: hand size, stature, gait, skin toughness, strength. Any physically observable trait is scrutinized, and the more “manly” the outcome the better the status. Frol has reasons for this of course. On Frol’s planet, women are so numerous (outnumbering men in something like a 6:1 ratio) and afforded so little opportunity that they can only serve as harem-kept breeding/pleasure machines for the men. Exceptions are made only for those who excel (like passing the Cosmo Academy exam) before committing to a sex/gender association. Add all of this together, and the message is clear: Frol’s world, by emphasizing male importance, devalues women to the point that those facing their sex/gender choice pine for the privilege of male status.

In real life, however, one's sex is not a choice. So anyone watching this movie should be disgusted with how Frol is being forced into an identity (body) not complementary to their mind, that their planet points to or mandates any direction at all instead of affording opportunity to all. That planet may have well been Earth back in the 1980's and, sadly, could still be taken for many parts of the modern world. This is why They Were Eleven is priceless. It’s a seemingly simple sci-fi story of suspicion that introduces an argument into society’s subconscious. Doing so, if that was the intent (and I believe it to be so), is daring and an example of not only what art should do but how it should be done as well. 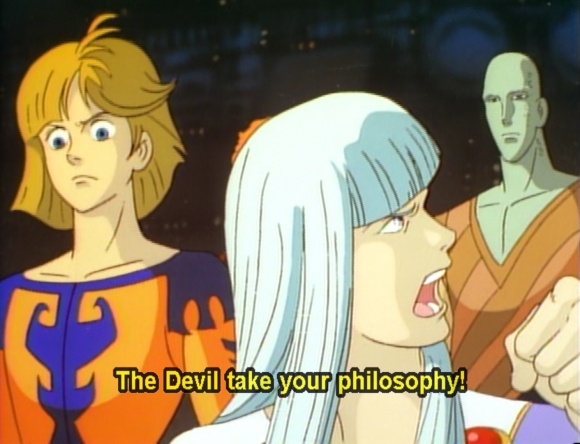