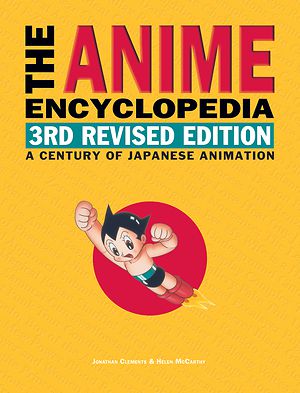 Listing every anime ever produced is no small feat. That’s why it’s especially impressive that the latest version of The Anime Encyclopedia (Amazon link

), written by British anime experts Helen McCarthy (The Art of Osamu Tezuka) and Jonathan Clements (Anime: A History), doesn’t just list them — it includes release and production information, plot synopses, and even critical analysis for each title.

Released today both as an e-book and physical copy, The Anime Encyclopedia, 3rd Revised Edition may not be the prettiest book out there (it contains no images, just page after page of textual description), but it is a bold attempt to compile a ridiculous wealth of knowledge on Japanese animation into a single book. McCarthy and Clements have dug up just about every title you could think of (I have yet to find one that they’re missing), from obvious classics like Space Battleship Yamato to obscure ‘90s hentai like Quiltian. It's surprisingly current too, with titles as recent as Akame Ga Kill (2014). The length of each entry varies widely, with more care and detail given to influential or historically important titles and cursory descriptions given to unimportant ones. In those longer entries, the authors don’t merely summarize; they call up interesting trivia about the work’s production, its predecessors, and its ancestors, and even toss in some of their own opinions.

The Anime Encyclopedia is a bold attempt to compile a ridiculous wealth of knowledge on Japanese animation into a single book.

This last bit was an unexpected feature, as I figure a book with “Encyclopedia” in its title will impart facts with no editorializing. Luckily the analysis is short, snappy, and often witty, though the lack of individual attribution to McCarthy or Clements makes it hard to know where each opinion is coming from. There’s also a bit of a tendency for them to dismiss newer series based on their similarity to previous ones, which can make them seem a bit stodgy. This might rub new-school fans the wrong way, but it actually serves as a nice way of connecting new titles back to their predecessors.

The encyclopedia doesn’t stop at the anime itself, either. There are 32 entries on various subjects, including “Overseas Distribution and Piracy," “Gaming And Digital Animation," and “Wartime Anime." Each is filled with references to particular titles, thus serving as a useful gateway into anime you may not have heard of. Scattered throughout are a handful of creator- and studio-centric entries as well, summarizing the careers of directors like Satoshi Kon and famous animators like Yasuo Otsuka.

As an anime trivia nut, I find The Anime Encyclopedia an immensely useful reference book, but it’s also fun to flip it open and read a couple of randomly chosen entries, since there are lots of weird ones that I’ve never heard of. Still, with such a massive page-count (nearly 1200 in the print version), it begs the question: why is this a book at all? Current Internet resources on anime are scattered and incomplete (Wikipedia and the Anime News Network Encyclopedia can only take you so far), so why not turn this whole thing into a searchable, hyperlinked website? Maybe it’s just tradition, since the previous editions were released as books. Fortunately, there’s an e-book version of the Encyclopedia with frequent hyperlinks between its entries (and, ironically, to Wikipedia and ANN), a useful addition that makes the experience much closer to, if not quite as intuitive as, that of a website.

I haven’t read previous versions of the encyclopedia, so I can’t compare this one’s completeness or visual representation. I can, however, compare it to Jason Thompson’s excellent Manga: The Complete Guide, a dense compilation of reviews for every manga ever released in the US. The Anime Encyclopedia is far more thorough than Thompson’s book, both in breadth (it includes Japan-only releases) and depth (entries sometimes span multiple pages), and serves as an excellent anime-centric companion to that book. If you find your online options lacking and you don’t mind having to Google titles yourself to see pictures of them, The Anime Encyclopedia is a fantastic way to learn more about your favorite anime and expose yourself to a whole world of new titles.

This review is based on a complimentary e-book provided by Stone Bridge Press.