For this year's Secret Santa, I had the good fortune of being given the chance to watch the 2010 noitaminA show, The Tatami Galaxy. Whoever drew my name, I salute your discerning taste and insight into my own predispositions. And while I enjoyed the Protagonist’s quest for a rose-colored campus life, I also accept that it's not a journey for everyone.

Rather than ease you into the world, the characters, and the story, the Tatami Galaxy throws you into a world of bold colors and psychedelic imagery. Combined with a torrential downpour of narration by its nameless protagonist, this show leaves you scrambling to keep up from the first episode. I should probably mention that this anime is directed by avant-garde director Masaaki Yuasa of Kick-Heart and Ping Pong fame. Even if you’ve seen any of Yuasa's other works, this show can take some getting used to. Indeed, you might end up finding out that this particular work isn’t for you. If you can get past initial shock, however, a subtle alchemy transfigures the jarring into the sublime.

At its core, The Tatami Galaxy is a take on the time loop plot—where a character repeats a segment of time over and over until reaching an epiphany of some kind. In this show’s case, Protagonist (no really, that’s his name) repeats the same two years of university life desperately trying to find the combination of choices that deliver him to the promised land of raven-haired maidens and a perfect, unattainable ideal. Each time, the conflict of the main character is elaborated upon, and dramatic tension is heightened. The tricky part with a time loop show is giving the plot a sense of forward motion that keeps the repetitive nature of the structure from getting too stale. Tatami Galaxy does this well enough, expanding the world of the show and the cast bit by bit over the course of its eleven episodes. The final act of the show turns the structure on its head in a way that keeps things fresh and provides a fun lead-in to the finale. 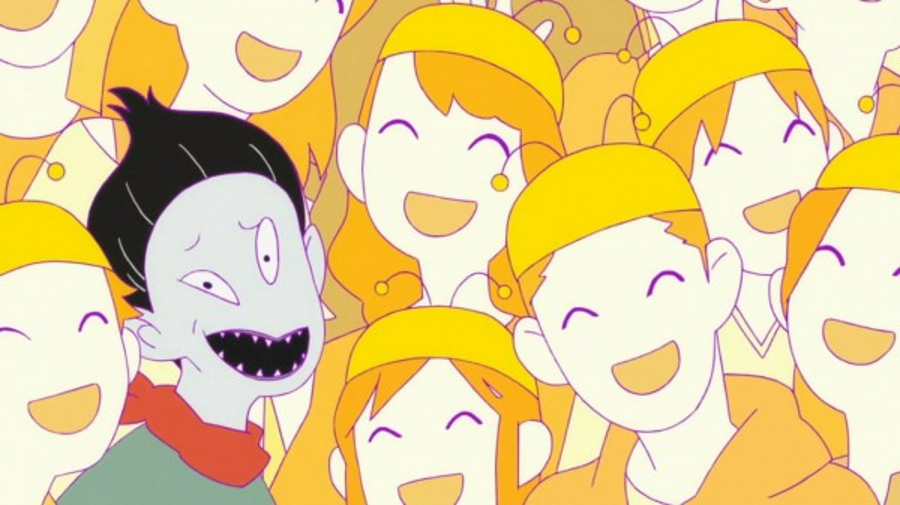 If you're looking for an anime that's a bit off the well-trodden path, I invite you to give The Tatami Galaxy a try. It’s one of the more experimental series from recent years, and if you can look past the abnormal rapid-fire narration, it serves as a good introduction to the work of Masaaki Yuasa — a man on his way to becoming one of the distinctive creators of his generation. Tatami Galaxy is a riot of colors and words — a fun, off-beat ride.

This review is based on a HULU stream.