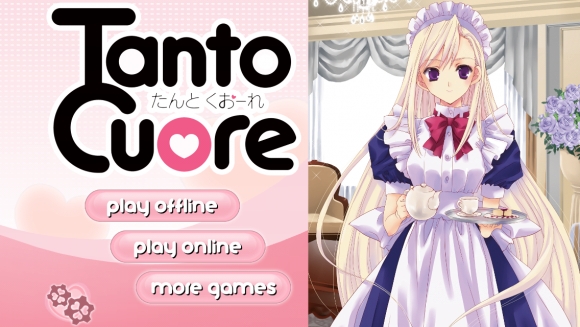 From the moment I saw Tanto Cuore at a convention last year, I was sold on the concept. It’s a deck-building game in the vein of Dominion, with the twist being that all the cards are themed around anime-style maids. Because I’m me, I’ve gotten way more mileage out of the gimmick than most people would. However, with the new iOS port of Tanto Cuore, now even the casually curious have the chance to try it out without letting friends and family know of their interests. Even if the pink and frilly appearance has you writing it off, know that there’s a real game behind the cute girls.

The game is committed to its theme and trusts that players are as hyped about maids as the creators are.

Initially, Tanto Cuore seems needlessly complicated. There is a surprising level of depth to the game and winning strategies won’t jump out at beginners until they've struggled through a few rounds. The thing about the game that gets everyone confused at first is the terminology. The game is committed to its theme and trusts that players are as hyped about maids as the creators are. There are Private Maids, General Maids, and Maid Chiefs, each serving a different purpose. Players will need to coordinate their Serving Points, Employment Points, and Love Points to generate deck-clearing combos to buy up all the Victory Points to win the game. Considering I’ve done nothing but play this game for the last week, it’s easy for me to say it’s all quite simple, but I can’t stress enough the importance of the tutorial given before players start their first match. As a matter of fact, Tanto Cuore is worth the three dollars for the tutorial alone as a substitution for the included rulebook in the physical set of the game. 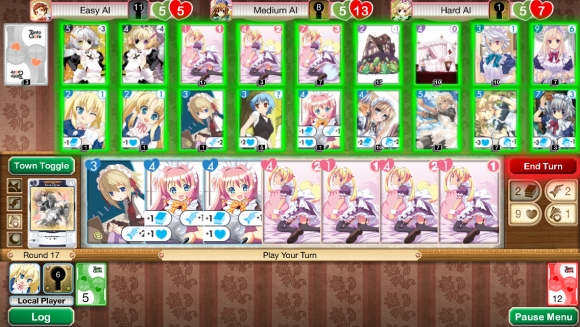 Aside from being the best way to learn how to play, Tanto Cuore is just a solid game in its own right. It comes out on top of a pile of mediocre anime games that plague the bottom ranks of the app store thanks to the care and attention put in presentation and mechanics. The analog version of this game could barely be contained on my coffee table, but Playdek did a fine job of working around the high-traffic nature of the game and fit it all together for a phone screen in an intuitive way. This does mean that the game occasionally suffers from how snugly packed in everything is. Dragging tiny icons across the screen requires a little finesse and sometimes taps won’t register, all problems that I’m sure are nonexistent on the iPad. Tanto Cuore can be played with up to four players, though I’ve noticed that matches featuring certain cards will get too hectic and can end prematurely as everyone races to snap up the hottest cards. The computer AI swings between dumb and merciless so if you get a few bad draws at the beginning, you’ll find yourself going through the motions for the rest of the match, unable to change things in your favor.

These are just minor complaints with the port rather than with the game itself. However, the one thing I can’t understand is why players aren’t allowed to choose the cards that will be used in matches beforehand. “Normal” mode plays according to the recommended starter setup, but there are cards in Tanto Cuore that won’t be seen by people unless they play in “Random” mode, at which point all control in creating the match is ceded from players. It almost makes sense as a way of convincing players to buy the real Tanto Cuore if they want control over the cards, but it does make me wonder how much more depth could have been added to the game otherwise.

Tanto Cuore is a predictably perfect fit for iOS.

Card games and mobile devices still go together like waffles and syrup. Not only is Tanto Cuore a predictably perfect fit for iOS, it’s a safer investment for the curious than the $50 set of actual cards that’s sold at board game stores and conventions. After a small learning curve, it becomes an absorbing pick-up-and-play experience. Having seen what Playdek has done with this game, here’s hoping those expansions are in the works.

This review is based on a downloadable review copy provided by the publisher.