I’ve really gone and done it now. Taking on a film with this range of artistic merit in the minds of a hushed, reverent, and international audience and then writing about it … it might be out of reach from someone who has only aspired as high as I have. My claim to a modest degree of fame is writing about anime, and I won’t pretend I say anything more or less substantial than the next critic falling over themselves to hammer out a quick entry for their blog. 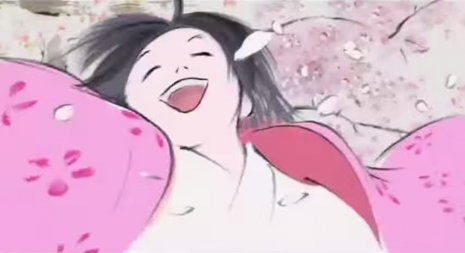 Ghibli is a known quantity. Anything I can drop in that hat, as far as critical observation goes, is a handful of dust in the wind. That The Tale of Princess Kaguya is a miraculous triumph, a masterful work of the highest caliber, is all rather unsurprising. As it should be. No surprises are fine. Sometimes, you just want what’s written on the tin. Granted, some Ghibli works are better than others, so it doesn’t help much if I say it was good, fantastic, better than Ponyo, or whatever other hasty judgment I could wish to lay on it. Any terse sort of emphatic acclaim that people will lay on thick, myself not excluded, is going to fade from mind once the film begins to move.

That Princess Kaguya is a miraculous triumph, a masterful work of the highest caliber, is all rather unsurprising.

Kaguya will be best enjoyed indulgently, slowly, frame-by-frame once a video release is available. From the start, the film falls over the shoulders like a warm and richly textured blanket. It runs a lengthy two hours and change, so it’s best to get comfortable. Among Studio Ghibli’s extensive body of work, Kaguya stands apart by showing little outward resemblance to anything else they’ve done. Better for it. Words like “beautiful” and “majestic” will suffice, but when the pictures are in motion, these descriptors become trite. Ghibli's penchant for overproduced scenery bursting with detail is kept in check. The minutiae is substituted for the broad strokes, for solid colors and palatial wooden floors. A rewatch won’t reward anyone with a Totoro cameo (I hope)—the rustling bamboo, streaming fabrics, and expressive character animation are reward enough.

In spirit, Kaguya carries a lot of Ghibli’s signature strokes. Before I make the egregious mistake of writing a certain Colonel Sanders impersonator's name before Isao Takahata, let it be known that Takahata is the one and only accredited director for The Tale of Princess Kaguya. And even with a thinly-veiled environmental message here and a violent shock of animated hair there, Kaguya wishes to outrun the specter of Miyazaki and the Ghibli brand as much as the titular princess herself wishes to outrun fate. Merely wishes; Kaguya is not a radical departure from what Ghibli does, and Miyazaki is as alive as ever as of this writing. But the idea is starting to form. Kaguya doesn’t reveal a bold new direction for a studio contending with the reduced direct involvement of a person once believed to be a permanent fixture, but it does betray hints of unexpected development. “Growth” is hardly the sort of term anyone could attribute to a studio as mature as Ghibli, but given another forty years, what kind of work will they be creating? The princess joins a long line of irascible heroines dashing through harmonious wilderness, and I sincerely want to believe that this may be the end of the line. It certainly feels like the right note to end on. If Studio Ghibli doesn’t store away for good the template that’s given the world Nausicaä, Kiki, San, and so forth after this, only then do I take everything back—they haven’t changed a bit, won’t change at all, and they aren’t fit to be led by anyone amounting to more than a ghost in a white apron.

Like I said, Ghibli is not a place to look for for surprises. Perhaps that applies doubly so for Kaguya, an adaptation of an age-old story. During one scene, I had a twinkle in my eye for all of ten seconds about interpreting Kaguya through the lense of feminist critique, but I’ll leave that to a steadier hand than mine. It’s a film you can show your mum or a progressive and aggressively outspoken girl friend, but perhaps something like Howl’s Moving Castle will be a little more crowd-pleasing. Kaguya is a tale, a rare and lovingly rendered one, and perhaps like the fairy tales we have stateside, a tale inflicted on restless Japanese children before bed. I was enthralled for two-thirds of it, and the end never seems to arrive until it just does. The film doesn’t fail to rise to the necessary emotional crescendo during the final moments, but it does take it’s time to get there; few would be held to blame for being lost to sleep before then.

Kaguya's better than Spirited Away.

Discuss one Ghibli film and you end up contemplating them all. Graded comparisons are unavoidable, and I’m not above it. Kaguya falls somewhere around personal favorites Castle in the Sky and Totoro, and I refuse to clarify which stands above the other. The only statement I’d wish to be quoted on is that it’s better than Spirited Away, since that feels like the sort of en vogue thing to say right now. Kaguya is certainly not the first Ghibli film to be declared better than Spirited Away, but better than Ponyo just seems cruel these days. I’ve never even seen Ponyo.

This review is based on a screening at IFC Center on October 3rd, 2014.