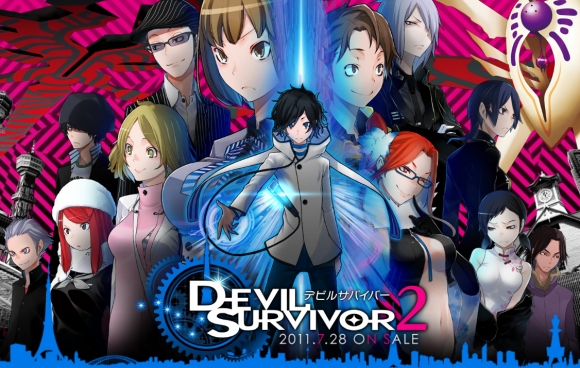 EDITOR'S NOTE: Today we've got a guest review from the "Anime Anthropologist" himself, Charles Dunbar. Enjoy!

What would you do if one day the world ended? You're standing there on a subway platform, chatting with your friends, when suddenly everything goes horribly, inexplicably wrong. Demons leap from your cell phone, trains derail, and your formerly safe world is turned upside down, the illusion of peace and tranquility irrevocably shattered. Would you fight? Or would you allow the monsters to take your life and end your story right there?

This is, of course, purely hypothetical. It also is the plot behind Devil Survivor 2, the latest game in the Shin Megami Tensei Series. But aside from being the plot of an immersive game environment, it's also a question worth asking yourself. Which is one of the ways the MegaTen series distinguishes itself from others of its kind: by posing a serious question then giving the player a chance to see how their decisions pan out.

Decision and consequence are something of a rarity in the gaming sphere: while Fable attempts to craft the entire game around free will, Skyrim posts bounties, and Knights of the Old Republic has alternate endings, more often than not the game world is such a far cry from the real one that the message gets lost, or the impact of such decisions are meaningless in the grand scheme. Not so with MegaTen: the world is the player’s own (within reason) and the decisions often mean the difference between survival and death in the face of devastating odds. While not open-ended, the games do allow the player to make important decisions that really do affect how the game ends. 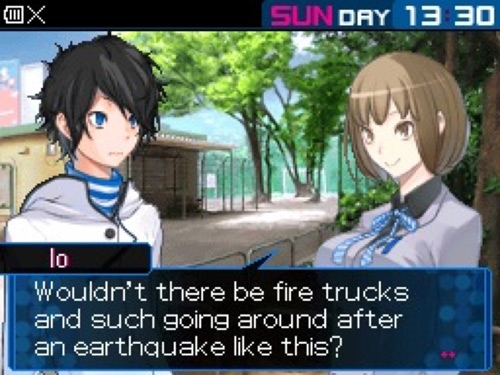 Devil Survivor thrusts the player into the middle of the action. While combat is a central part of the experience, so is choosing your path while the days play out. It’s not a totally fixed narrative, but rather a massive catalog of interwoven threads that lead the player deeper and deeper into a world on the brink of destruction: demons make pacts with humans for power, the government’s “defenders” attempt to maintain order through questionable means, and a mysterious stranger judges humanity’s worth through technology and philosophy, all while a massive celestial entity plots the downfall of the world should it be proven unworthy. It’s not enough to just survive, no — you need to persevere and thrive against these maneuvering powers, often with little to no information beyond hunches and limited gleams of knowledge.

Insignificant humanity? Deals with the otherworld? The base nature of mankind? All-encompassing destruction on the whims of a galactic entity? Consequences to one's actions? Is this even the plot of a game, or some unpublished H.P. Lovecraft novel? When was the last time I even asked myself this question? It can be maddening at times, especially when the player might want to “do the right thing,” only to be confronted with several paths that hold both appeal and dread. In other words, it feels like life, and sometimes making the wrong decision stings a little.

The level of customization and implementation in Devil Survivor 2 is rarely seen in games these days.

Of course the game gives you weapons: demons, and lots of them. Well, not all of them are pure demons. Many are gods and other mythological figures, but they fill important roles in the upcoming conflict — make pacts to gain their services, use them in battle, and fuse them with other demons to make even more powerful creatures. In the Persona series, these entities serve as an extension of the character’s willpower and psyche. In Devil Survivor, these entities serve the player, but only if he can control and understand them (insert Pokémon reference here). They are limited only by the player’s ambition, and are as powerful as his cunning allows. This level of customization and implementation is rarely seen in games these days, especially portable titles. Mastery of the fusion system is necessary to ensure success — otherwise the player’s party members will die frequently in the middle of the brutally taxing battles.

Case in point: after seven days of struggle against the might of the stars, your goal is upon you. The last of the Seven that have dogged your heels stands ready, and your allies have managed to gain a slight advantage against his ability to banish your demons. You move forward into battle ... and die. Repeatedly. Grinding barely helps. Rearranging skills and magic does little as well. Devil Survivor 2 forces the player to confront the situation from all sides and explore the many roads that lead to victory. Or, in the case of this monster, one road — fraught with devastation and loss. It’s a testament to the power of the game that even in the face of such frustration, a player will keep going until the deed is done.

The 40 hours or so of Devil Survivor 2 are some of the most challenging I have ever experienced. I often second guessed not only my choices in battle, but also the course of the plot. Do I ally myself with the government, with the rebels, or with myself? How will my choices impact where the story ends up (one of the endings is downright nightmarish if you choose the wrong “side”)? Should I fuse away a valued, proven ally in favor of something else, or do I spend all my hard-earned money re-summoning old demons? Mistakes, while easy to make, are extremely hard to rectify, and foresight becomes extremely important in the end. But all told, Devil Survivor 2 is a worthy challenge to attempt, and even more satisfying to overcome.