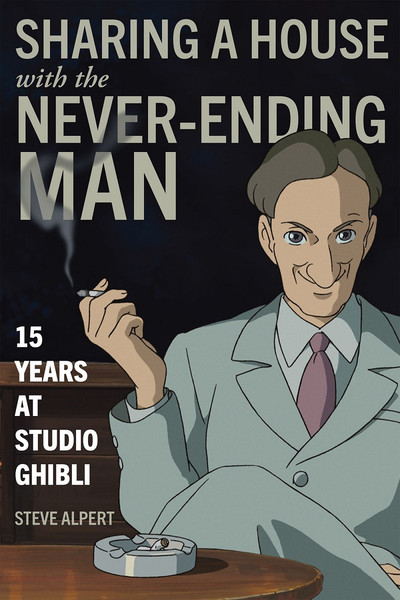 A unique and often frustrating aspect of English-speaking anime fandom is the fact that, for all the reams of paper written about Japanese animation in English, it’s only a fraction of the amount of information available in Japanese. When fans try to learn about the behind-the-scenes production of their favorite series, it’s like trying to map out a house by looking through a keyhole. Of course, this is why so many famous creators and studios spawn pervasive (and often flat-out inaccurate) fandom myths. When an English speaker works at an anime studio and emerges to tell their story, we’re able to crack open the door just a little bit and dispel these myths once and for all. Sharing a House with the Never-Ending Man by Steve Alpert opens the door of anime’s most famous studio and a common subject of these myths: Studio Ghibli.

In an ironic twist, despite being written by an American, the book was originally published in Japanese before getting translated into this new English edition from Stone Bridge Press. The book is a wide-ranging account of Alpert’s 15 years as the head of international licensing at Studio Ghibli, where he worked alongside studio founders Hayao Miyazaki and Isao Takahata as well as executives like Ghibli President Toshio Suzuki and the head of Ghibli’s then-parent company Tokuma Shoten, Yasuyoshi Tokuma. Miyazaki is the name that sells books so he gets top billing as the titular “Never-Ending Man,” but the real stars here are Suzuki and Tokuma.

That’s right, this is a book about business meetings. Much of it takes place in meeting rooms or at fancy business dinners, with Alpert sandwiched between impatient American executives and the folks on the Japanese side: Suzuki, the shrewd negotiator, and Tokuma, the blustery power broker. Miyazaki makes occasional appearances in which Alpert does his best to sketch out his personality and process, but there’s a disappointing lack of the kinds of details on his creative process that most Ghibli fans will want from this kind of book. Instead, much of the book centers around Alpert‘s day-to-day observations on differences between American and Japanese social and business culture. Sometimes it can be pretty interesting stuff, but at other times it verges on minutiae.

Among other anecdotes, we get the full story of the famous samurai sword presented to Miramax executives with the message “NO CUTS.”

Thankfully the book does shed some light on some popular legends about Studio Ghibli. Among other anecdotes, we get the full story of the famous samurai sword presented to Miramax executives with the message “NO CUTS.” Alpert lays out the behind-the-scenes discussions that led to Miyazaki skipping the Oscars for his Spirited Away win (Alpert gave the speech). A full chapter is dedicated to the turbulent production of Princess Mononoke’s English dub. Oddly, despite a one-line reference partway through the book and a relevant image on the cover, Alpert never recounts how he ended up as the voice actor for Kastrup in The Wind Rises (he made up for this with a 10-paragraph answer in his Anime News Network interview).

The prose is hardly the most exciting stuff (understandable considering the subject matter), but Alpert tries valiantly to add a bit of humor to spice things up. Unfortunately, it comes off as creepy in some cases; in one story, he repeatedly remarks on how distracted he was by a 16-year-old starlet sitting next to him at an awards ceremony.

Multiple neutral-to-positive references to John Lasseter from Pixar and Harvey Weinstein, who distributed Ghibli films through Miramax, don’t help matters. This book was written before #MeToo and its English edition was likely completed before Weinstein’s rape conviction, but while Alpert is not defending Weinstein, the two-sentence hand-wave of his “Me Too troubles” is odd. Surely Alpert could have added a more full-throated condemnation of Weinstein and some acknowledgment of Lasseter’s sexual misconduct to the English edition, considering Ghibli’s close ties to both men.

Sharing a House with the Never-Ending Man is an uneven and sometimes very dry book that seems caught between a few goals and target audiences: its original Japanese readers, its new English ones, international businesspeople, and anime fans. Is this a book I’d recommend to the average anime fan or even the average Ghibli fan? No. But I’m glad it’s available in English, if only because it offers us a new English-language primary source that opens the door into the Japanese anime industry a little more.