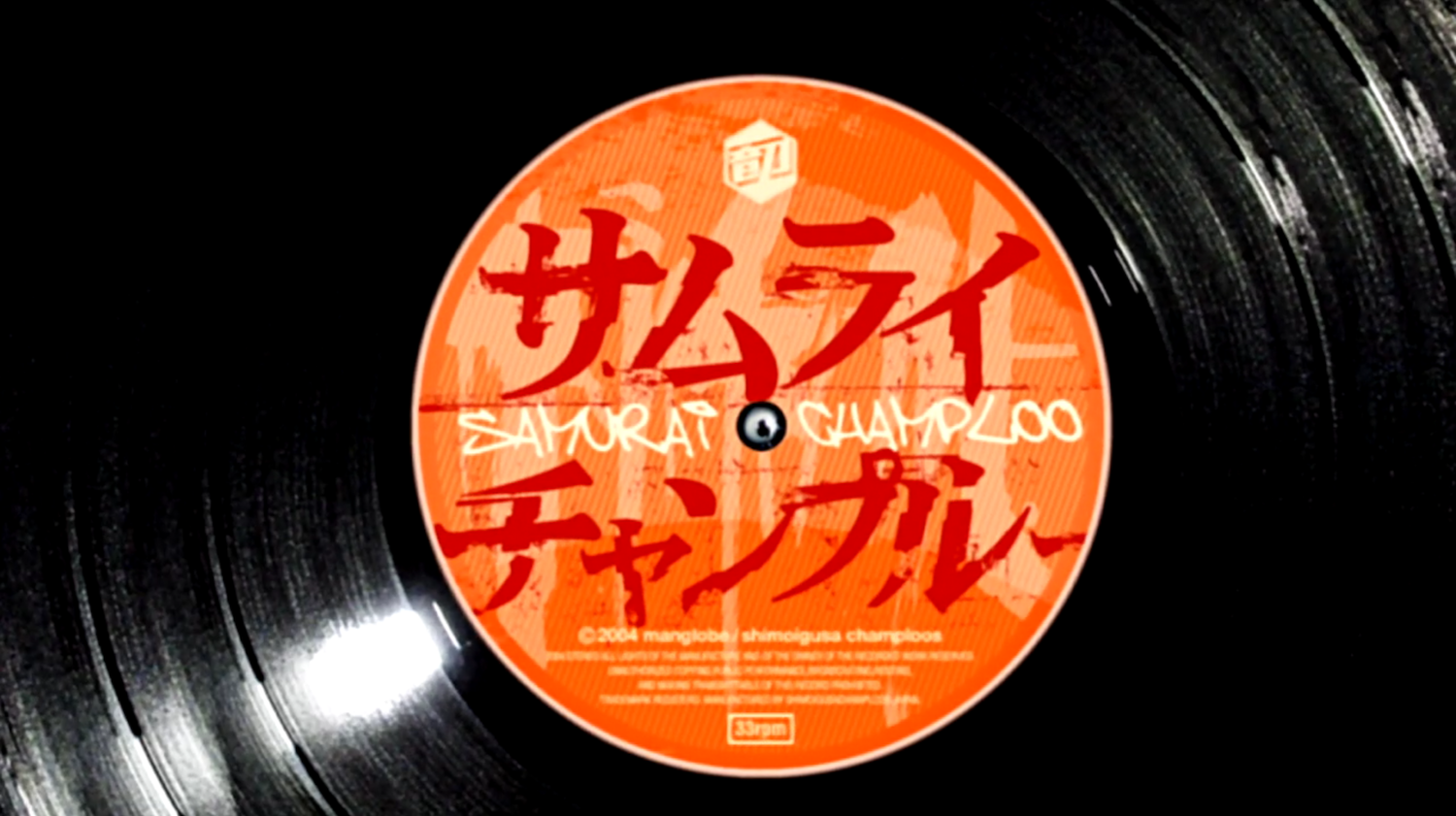 We participated in the Reverse Thieves' Anime Secret Santa this year! Evan was assigned to review Samurai Champloo.

When someone tells you they like Cowboy Bebop and asks after something similar, your recommendation can usually go in one of two directions: a) laterally, toward Bebop’s contemporary 1998 Space Westerns (Outlaw Star and Trigun), or b) forward, toward its spiritual successor, Samurai Champloo. Though director Shinichiro Watanabe (Space Dandy, Kids on the Slope) is now known for a variety of series in a variety of styles, he had a reputation for being the “genre mashup guy” in 2004 (when Champloo came out). This stems largely from Bebop being a “jazz-themed Space Western” and Champloo being a “hip-hop-themed samurai road movie." 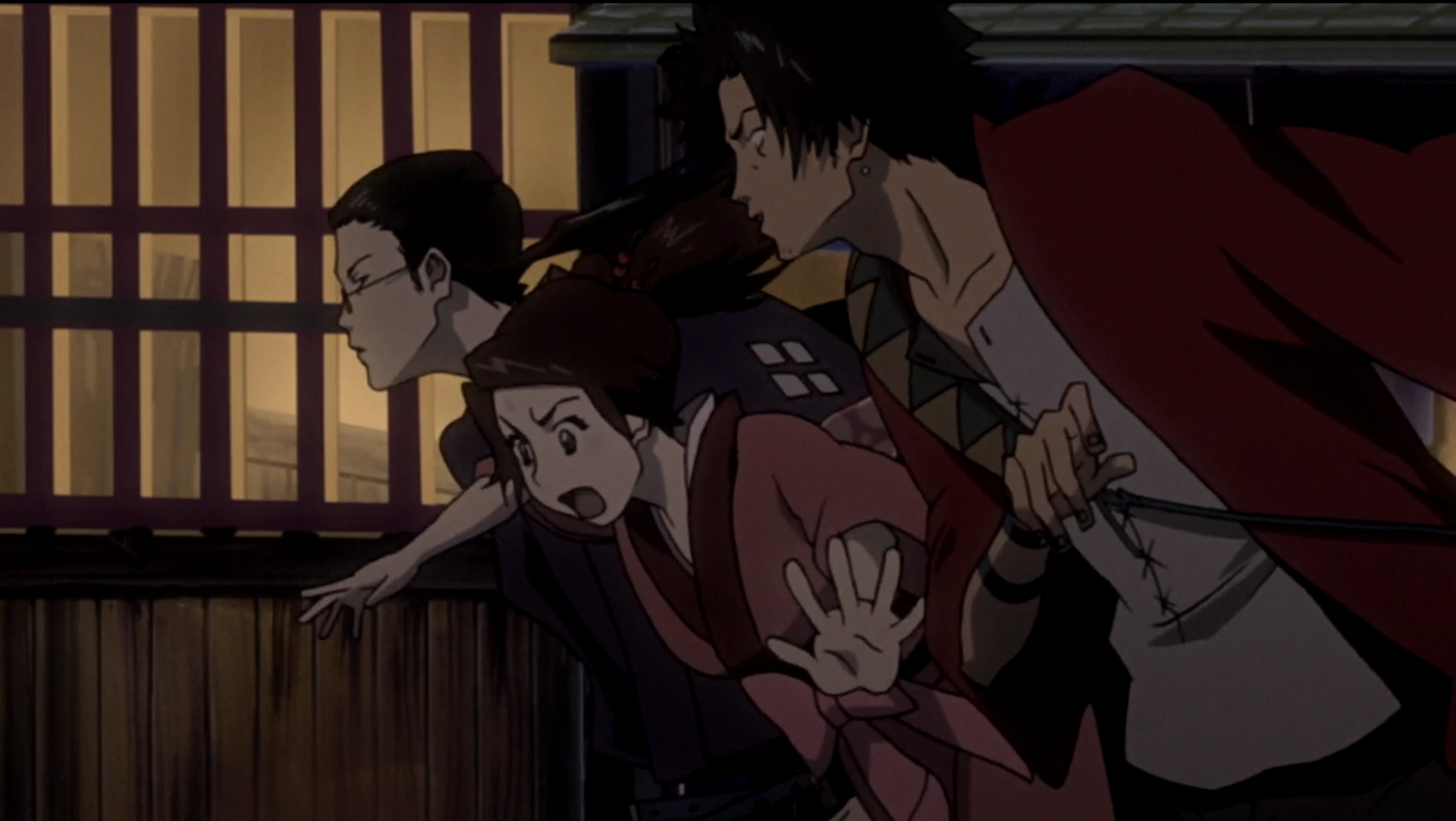 If those two series were all you had seen from the director, you’d be forgiven for thinking that Watanabe is a one-trick pony. Take the cast of Cowboy Bebop and dress them in Meiji period attire, and you wouldn’t be far off from the cast of Samurai Champloo. Mugen is a wild, unpredictable sword fighter with no respect for authority and a love for the rush of combat. Jin is a stone-faced, wandering samurai with a strong sense of honor and respect. Finally, Fuu is a 15-year-old waitress who just had her place of employment trashed when a fight broke out between the those two men. Out a job and on a mission, Fuu recruits the two to follow her across Japan and find “the samurai who smells of sunflowers," and that simple setup provides a frame for a series of largely episodic run-ins with assassins, prostitutes, and more.

Despite the surface similarities between Bebop and Champloo, it doesn’t take long for the latter to carve out its own place in the Watanabe canon. Whereas Bebop was all about smoky noir drama and classic action movie antics, in Champloo Watanabe shows much greater comic flexibility. The meticulously designed spacebound universe of Cowboy Bebop gives way to a cartoonish, intentionally anachronistic vision of Meiji-era Japan, complete with boomboxes, graffiti, and switchblade-toting yakuza. Champloo plays these elements almost entirely for comedy, but that’s not where the influence stops. Cross-cutting is very often added via record-scratch effects, and, of course, the backing music is all hip-hop and R&B. This works better than one might expect by adding a pulsing underlying energy to scenes that might be much more staid with period-appropriate music. The playfulness of hip-hop also works well for the many straight comedy episodes in Champloo, including a kooky marijuana episode and a gloriously absurd baseball one. 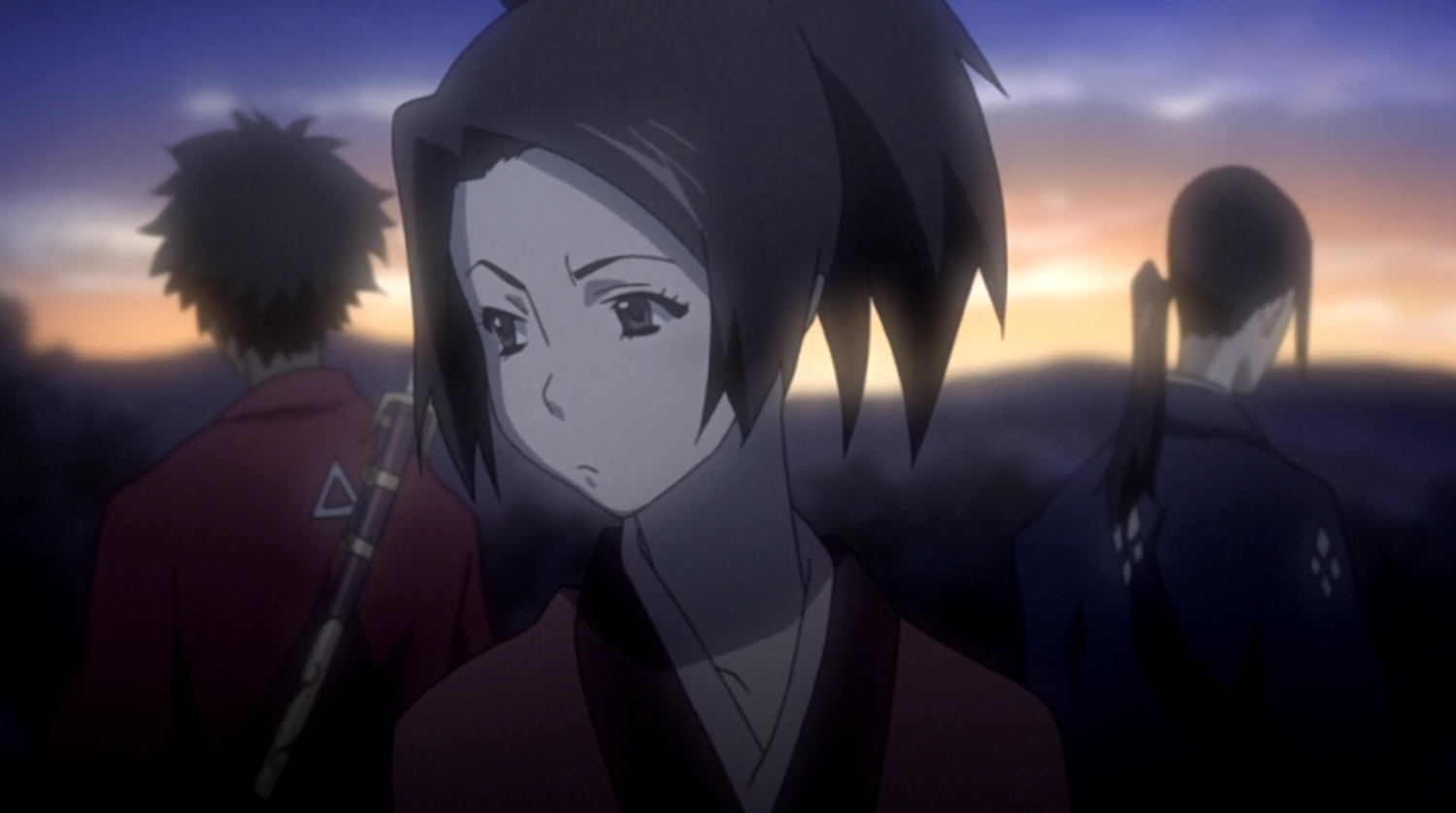 But it’s not all fun and games. Champloo has its own equivalents to "The Ballad of Fallen Angels" and Bebop’s other heavy backstory episodes. Mugen has a troubled criminal history, Jin killed his own dojo master, and Fuu is recovering from the death of her mother. Each of them gets a few episodes to play out their pathos. Unfortunately, other than a particularly tense conclusion to a Mugen episode, these backstory arcs rarely have the same tight scripts and sense of profound tragedy as Bebop’s. This highlights the absence of Keiko Nobumoto, the scriptwriting genius behind Bebop and Tokyo Godfathers (she only wrote the script for one episode). Despite this, Champloo retains Bebop’s ensemble cast with a single focus point, but this time it’s not the badass slacker with the dark past (Mugen), it’s the innocent young girl (Fuu). Watanabe smartly reveals Fuu’s motivation for her search slowly throughout the series, and uses the journey as a device to build up the relationships between the three travelers. There’s a pervasive sense that these three characters, by all counts, shouldn’t be traveling together, but some twist of fate brings them into contact. When they get angry at each other and split up, as they do quite a lot, there’s a sense that this might really be the last time. It’s that simple story of companionship, of lost souls finding each other, that forms the heart of the otherwise disjointed vignettes of Samurai Champloo. 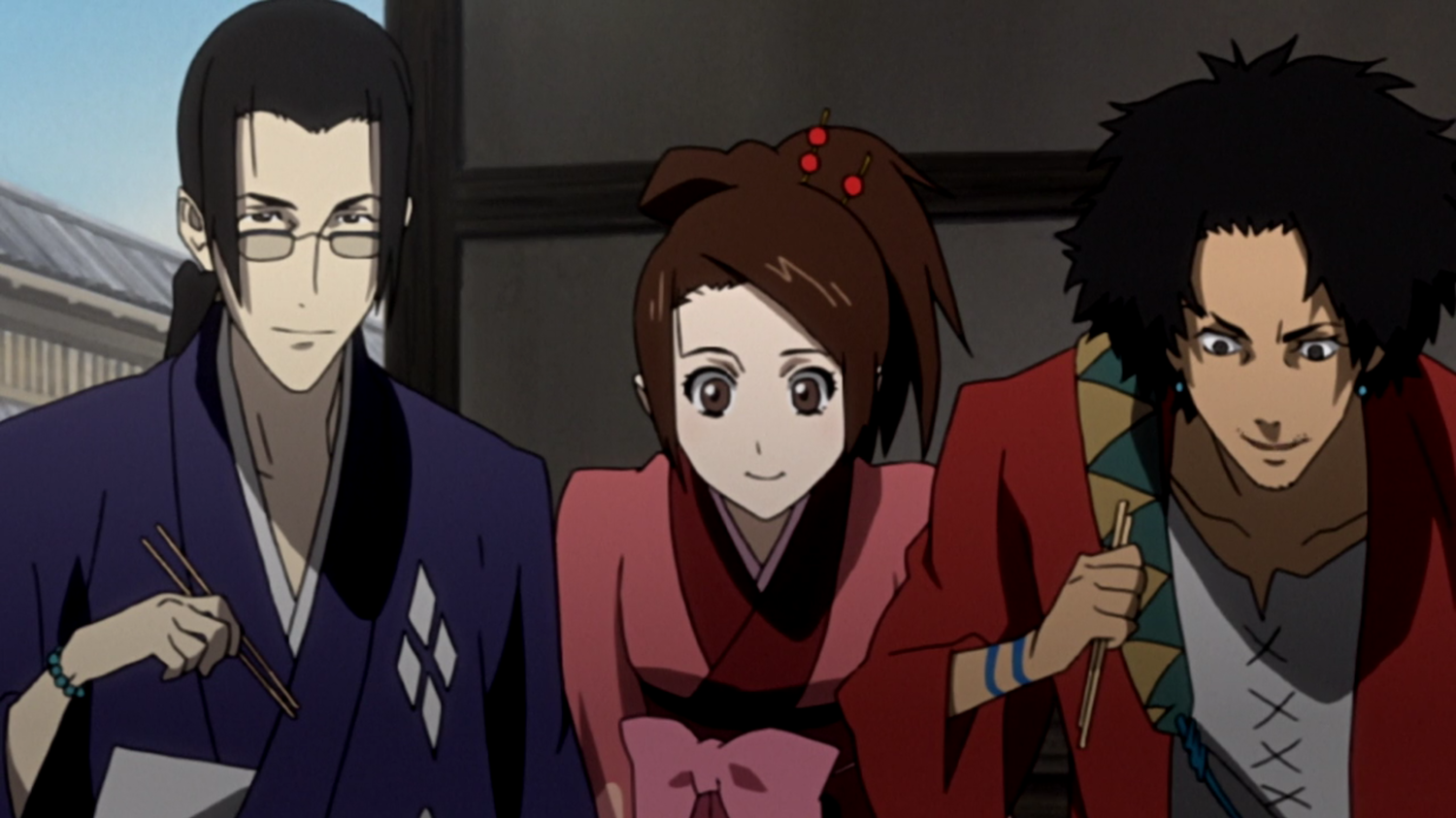 Nobumoto isn’t the only missing name in the credits. Studio Sunrise and designer Toshihiro Kawamoto handled Bebop, lending it a precise, mechanical art style, but Champloo is from Manglobe and Kazuto Nakazawa, who opt for a loose, often intentionally grotesque design style. This sometimes carries over to the animation, which features Watanabe’s kinetic, shaky-cam fight choreography but is marred in non-action scenes by off-model designs and wobbly, formless bodies. Luckily there are some standout episode directors at work on Champloo, including Watanabe’s protégé Sayo Yamamoto, whose relentless pacing and energetic action direction made themselves very apparent here before she moved on to her own projects: Michiko & Hatchin and Lupin III: The Woman Called Fujiko Mine.

Sayo Yamamoto's relentless pacing and energetic action direction made themselves very apparent on Champloo before she moved on to her own projects.

Comparisons to Cowboy Bebop in a Samurai Champloo review are unavoidable, so I’ll sum this whole thing up with one. Champloo is the light, popcorn version of Bebop with just enough weight and ambition to feel dramatic but not enough to burden its irreverent comedy episodes with undue melodrama. If Space Dandy is “'Mushroom Samba' every episode,” as Shinichiro Watanabe billed it when he first announced the series, Samurai Champloo is “'Mushroom Samba' every other episode” — a comfortable halfway point between Dark Watanabe and Light Watanabe. 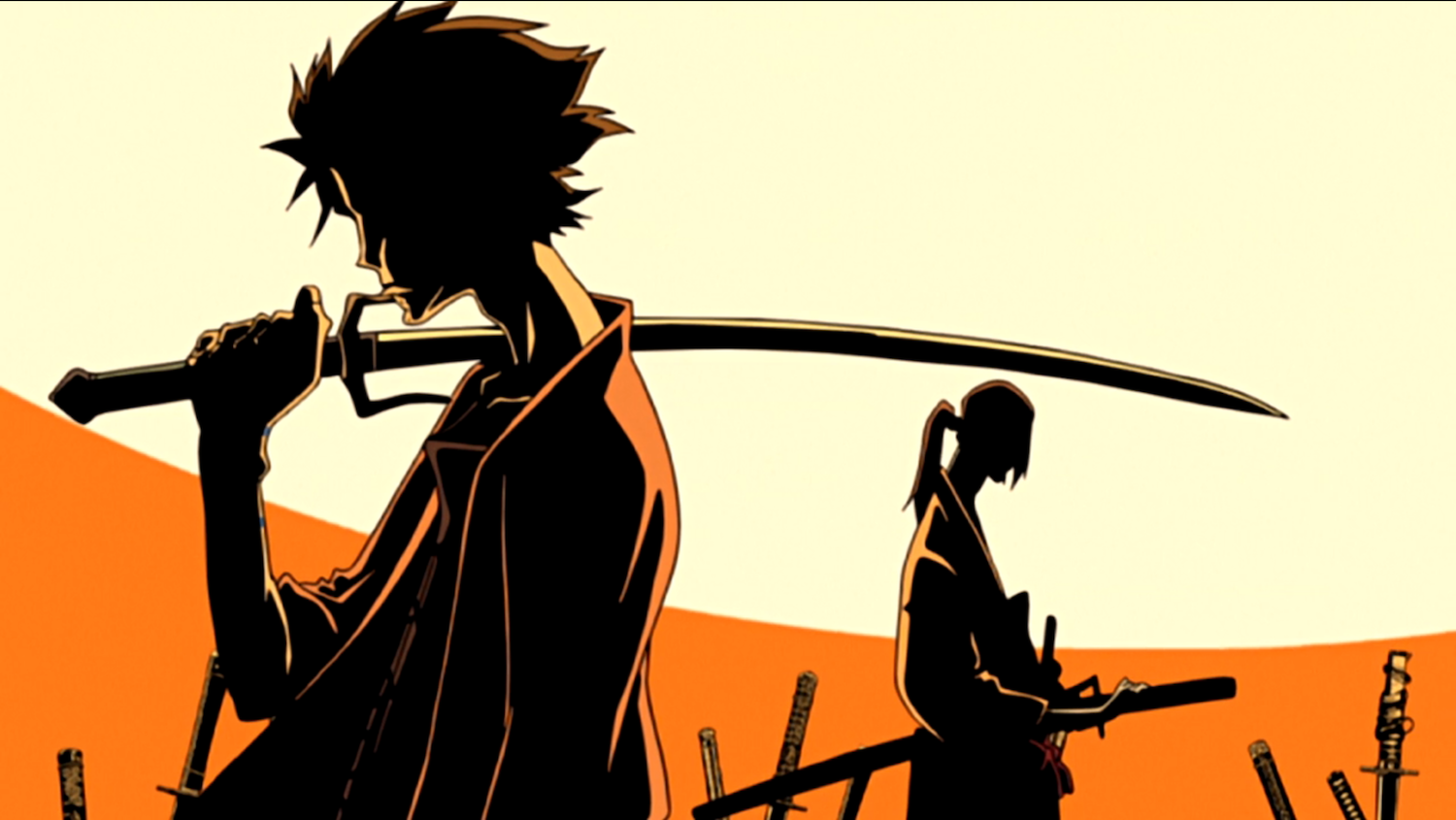 This review is based on streaming video on Netflix.