Saint Seiya, the brainchild of Masami Kurumada, follows a group of young people, each taking the name of a sign of the Zodiac, who fight to protect a young girl named Saori Kido. Saori is the modern reincarnation of the Greek goddess Athena, and the Saints who protect her use enchanted armor and magic fighting attacks. The series has spawned manga, anime, films, OVAs, and musicals. Since the story has a beginning, middle, and end, most subsequent stories authored or approved by Kurumada are set in and around the events of the original story or before them. In 2013, Kurumada approved Chimaki Kuori, who worked on manga adaptions of Gundam SEED and her own work Kimi no Kaeru Basho, to create a new story set in the events of the original series but focusing on an all-female group of Saints. This is Saint Seiya: Saintia Shō.

Saintia Shō is a perfect intro to the series.

Shō’s events revolve around Shoko, a young girl who comes to find her sister, Kyoko, the current Equuleus Saintia (the name for female Saints), but finds herself in the middle of the Galaxian Wars (a tournament to find new Saints). After her sister is taken by the show's Big Bad, Eris, an evil goddess that Athena once sealed away, Equuleus Shō (Shoko's new title as a Saintia) starts the journey to defeat Eris, destroy her Dryad army and save Athena and her sister. 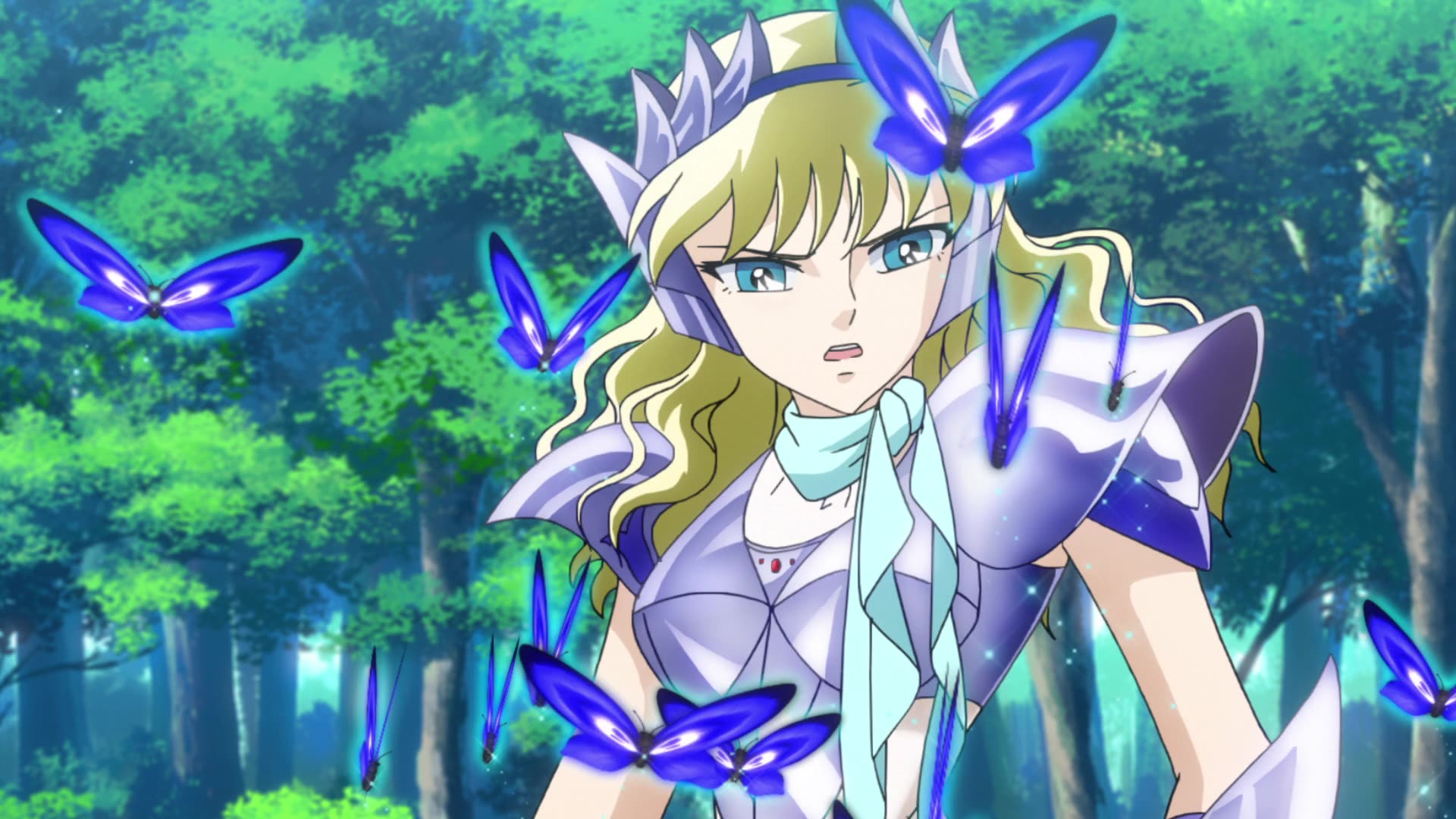 The fusion of Greek-inspired warriors and Japanese pop culture’s need to shout attacks in long line readings makes for a great time.

I really enjoyed this ONA (Original Net Animation); it’s an all female version of a existing property, and I’m all about that gender bending fighting shonen show juice, plus it’s only ten episodes long. Did I need to know about the events of the previous series to enjoy this? No, not really. In the comments for this show on Crunchyroll, someone describes it as Sailor Moon with armor. That’s both accurate and misleading. Both Sailor Moon and Saintia Sho are much more than girls calling out magic attacks. But the underlying elements of both (loyalty to friends, confronting an unholy evil and, a royal rumble fight at the end) are very similar.

In Sho’s case, the fusion of Greek-inspired warriors and Japanese pop culture’s need to shout attacks in long line readings makes for a great time. Shoko starts the show knowing nothing about her sister’s secret life, and we (and she) slowly get introduced to the life of a Saintia and what it demands. Athena at this point in the series isn’t the all-wise Goddess she will later become. Instead, she has the foibles of a young teenage girl who leads with her heart and tends to fight out ahead of her guard. Shoko learns as her time goes on that she needs to protect Athena from herself as much as she needs to protect her from Eris’ minions. On top of that, Athena is dealing with elements within the Sanctuary (where Saints train to go out into the world in Athena’s name) who would rather she stay a figurehead … and in some cases, a dead one. The series spends a healthy amount of time working out friendly fire problems while staying on guard for Eris’ attacks. 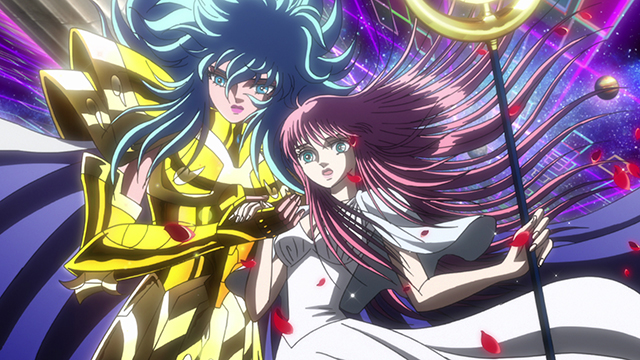 One thing that newcomers should know: this story is smack in the middle of the original storyline, playing out between two major storylines. So there are moments where the characters reference events happening elsewhere in the story but that have no immediate resolution. There was one event midway through the finale where Athena and part of her host leave and then turn up in a completely different place. Piecing together the parts, it turns out there's a part from the original run that fills in this gap. So there are what may seem like inconsistancies, but they're not annoying. I liked that element of the show: you're in the middle of a very big universe but don't have time to worry, because Sho's next challenge keeps your mind on her story, her fight, and her adversaries. For those who already saw the original show, there are references and characters (including some of the Gold Saints) to tie it all together. 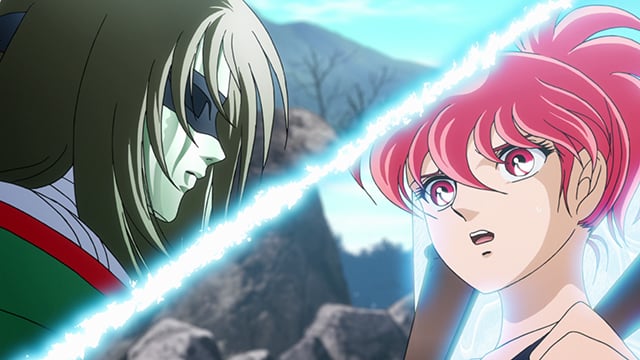 She has a big sister or aunt vibe to her — her pride at her newest charge becoming the heaviest hitter on the Saintia team hidden from view but visible at odd angles.

As the show progresses, Eris’ plan becomes known. The Saintia have to fight front and rearguard actions, the original Saints become involved, Shoko is tested by Pavo Mayura — a Silver Saint (Bronze, Silver, Gold in ascending order of power) who was crippled during a revolt against Athena years ago, and who I think is one of my favourite characters in the show. She is so exacting against Shoko that, at times, the girl looks like she’ll die in training. But she has a big sister or aunt vibe to her – her pride at her newest charge becoming the heaviest hitter on the Saintia team hidden from view but visible at odd angles. At the same time, the other Saintia range from the skilled but corrupted Katia to loyal and powerful Mii who have their reasons, bad and good, for fighting. One thing I’d like to draw attention to is that the animation by Studio GONZO really is good. The day-to-day animations might look average, but the Zodiac attack animations are first rate, and the voice cast scream their lungs out to sell you on their passion. At the same time, the character designs, which echo Kuori’s designs while also incorporating Kurumada’s originals for the Saints, are a nice blend. The voice cast includes Aina Suzuki (Love Live! Sunshine!!, The Quintessential Quintuplets) as Shoko and Inori Minase (Tada Never Falls in Love, Astra Lost in Space, Isekai Quartet) as Saori. Returning voices include Toshihiko Seki as Scorpio Milo, Ryotaro Okiayu as Gemini Saga, and of course, Hideyuki Tanaka as Leo Aiolia. 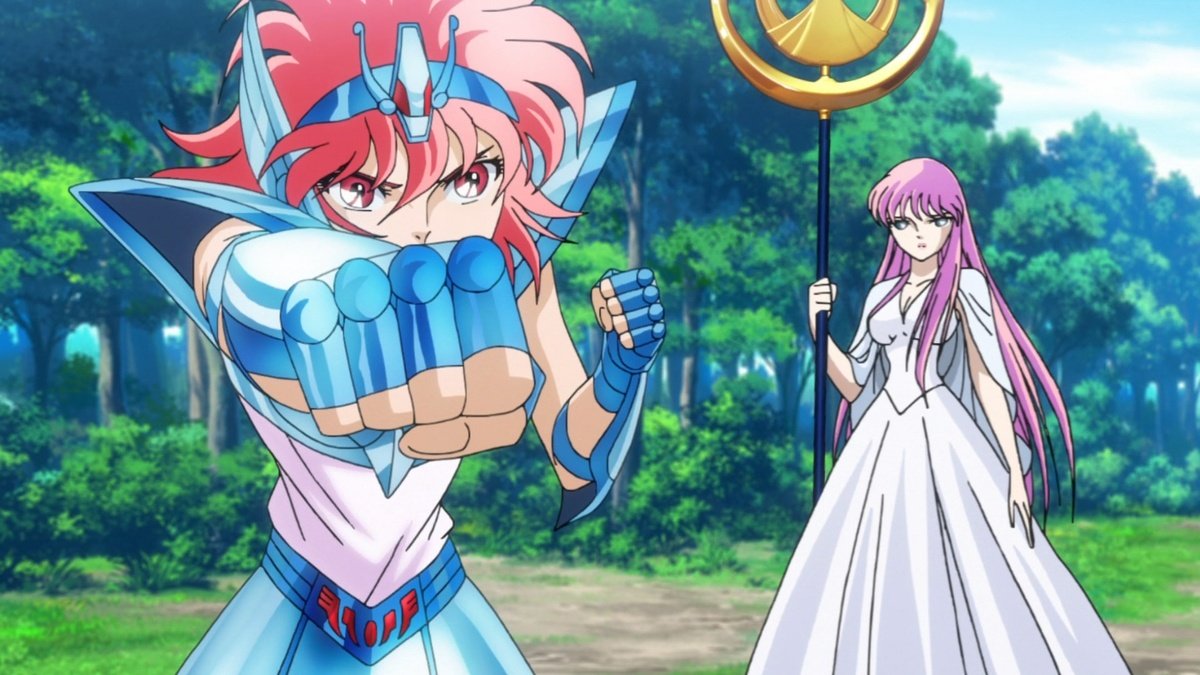 Saint Seiya: Saintia Shō is a perfect intro to the series. It tells the backstory of the previous hyperbolic shenanigans, says hi to a new group of heroes, and lays off on info dumping the whole thing in one go. The only bad thing is that there’s only ten episodes, whereas the original had over 100-plus movies and OVAs to tell its tale. That’s not to say anything of the redos, CG reboots, and everything else with the brand on it. Ten episodes isn’t enough for me to know Shoko, her fellow Saintia, and this version of Athena. I’d love to see more of it. Yes, I’m being greedy, but why shouldn’t girls climb into magical armor, scream attack moves at each other, and engage in the histrionics with the boys too?