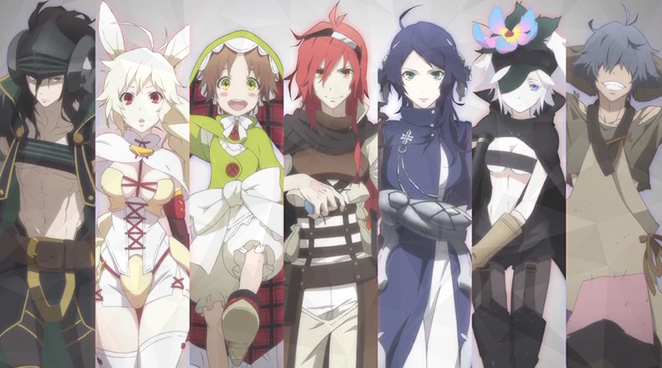 It’s not unfair to want more out of anime. I mean, I like all these shows about plucky boys who find themselves surrounded by girls or where the girls sit around and eat cake and have tea all day. Just once, I’d like to watch a show made simply for the audience where the point is to enjoy the story and not engage in more rethreading of ancient anime history. So I hope for shows where the makers just throw stuff together, jam in some plot twists, pinch from Western cinema and literature, and put it on display. This is what you’ll find when you watch Rokka -Braves of the Six Flowers-. 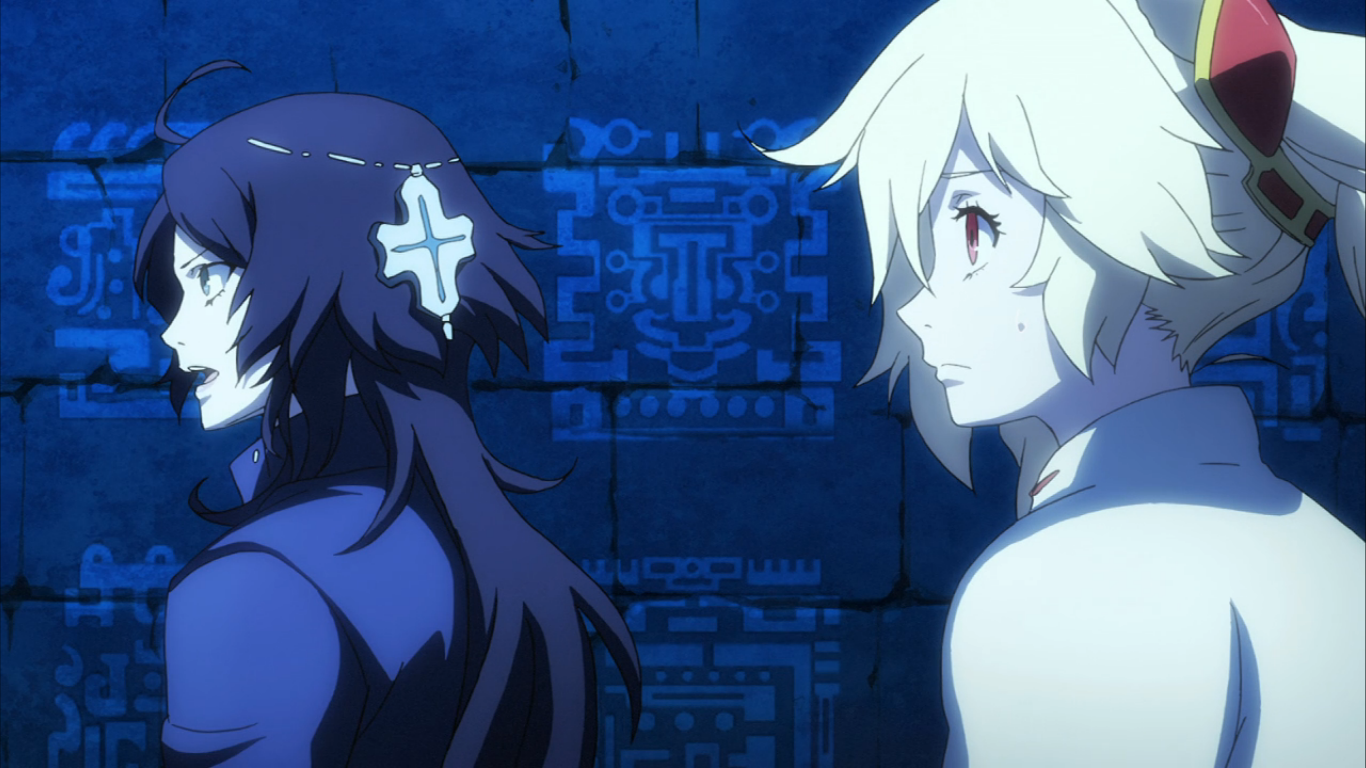 In the Pre-Columbian era in the fictional land of Piena, wandering swordsman Adlet Myer interrupts a battle in front of the royal family and defeats both the two combatants and the guards involved. He’s then knocked out and thrown in jail to be executed. (In this civilization, I’d imagine it would have something to do with being squished between two rocks). But one night, Myer receives the mark of the Saints of the Goddess of Fate. Charged with protecting the land against the Demon King who lives in the land of fire located west of the kingdoms, the Braves are the only ones who can provide protection against the Demons and their leader. Myer is broken out of jail by the Princess Nachetanya (she’s the Saint of Blades), who asks him to go with her to gather the other Saints and defeat the Demon King. Of course, Adlet Myer, being the strongest man in the world, goes with her and starts their adventure. 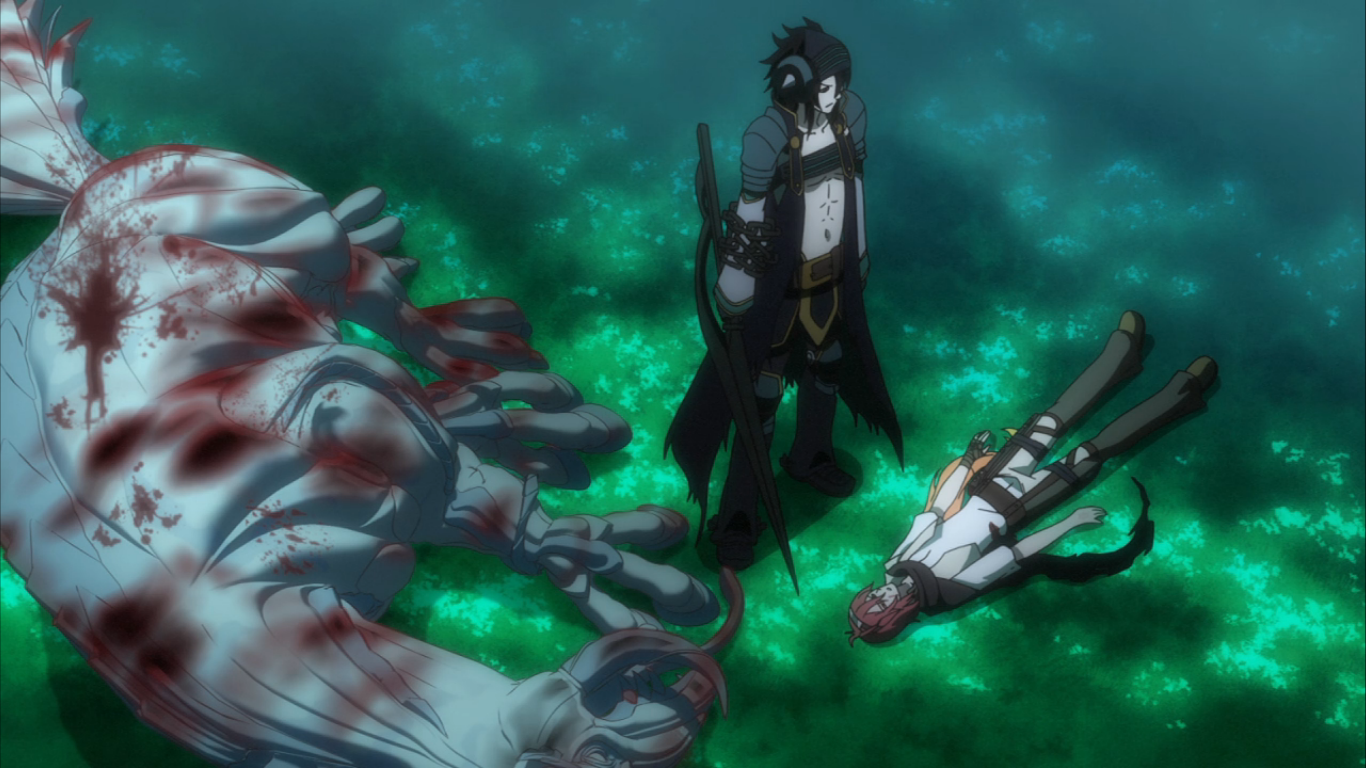 This series is based on a series of light novels by Ishio Yamagata, and I’m desperate to read them. As it's hard to tell if the show will get a second season, I want to find out how the plot threads left over from the end of the show get resolved. The way Rokka has the balls to tell its audience that the end result that every single cast member is working toward will not get resolved by the end of the first season is to be applauded. Most other shows don’t bother — rushing to get everything finished because a second season is not guaranteed. That has the net effect of finishing the main story and having to come up with something better for the second season, which is never as cool as the first one. So director Takeo Takahashi builds up his cast rather than the plot since he doesn't have enough of the latter upon which to hang the fate of the show's success. Central to why viewers should care about the cast is teh fact that Adlet cares about each of those who comprise it. Even though he knows he can’t trust them, he knows that he hitched his wagon to them and is not the kind of man to turn and run when the going gets tough. In the words of blaxploitation cinema, “He might have to take you down but he’ll never let you down.”

Part of the fun of the show is that the characters keep moving in a world both similar to the one we’re familiar with and not the same at all. In most other anime, the setting is a city or a kingdom that looks like Japan or a medieval land. At first, we’re ok with that. But soon, the show’s makers have to introduce elements familiar to viewers; certain Japanese societal norms and anime tropes have to adhered to in order to keep the audience's attention. I’ve never understood the need to do this, but then I’m not Japanese or the intended audience. Rokka, however, sets itself in a place that looks like a South American, pre-colonial world where magic works best but where science is coming to be a force of learning and discovery. There’s no jumping into Japanese culture here, because there is not a baseline from which to extrapolate a common frame of reference. The reference point here is the fantasy adventure model: a group of adventurers going on a quest to destroy, defeat, or contain an evil; rescue someone; or just generally have fun. It’s a story as old as literature but one that's easy to mess up by adding in things that seem necessary at the time but don’t do anything in the end. Once this happens in a series, I lose all hope and watch a show only to finish it … not enjoy it. 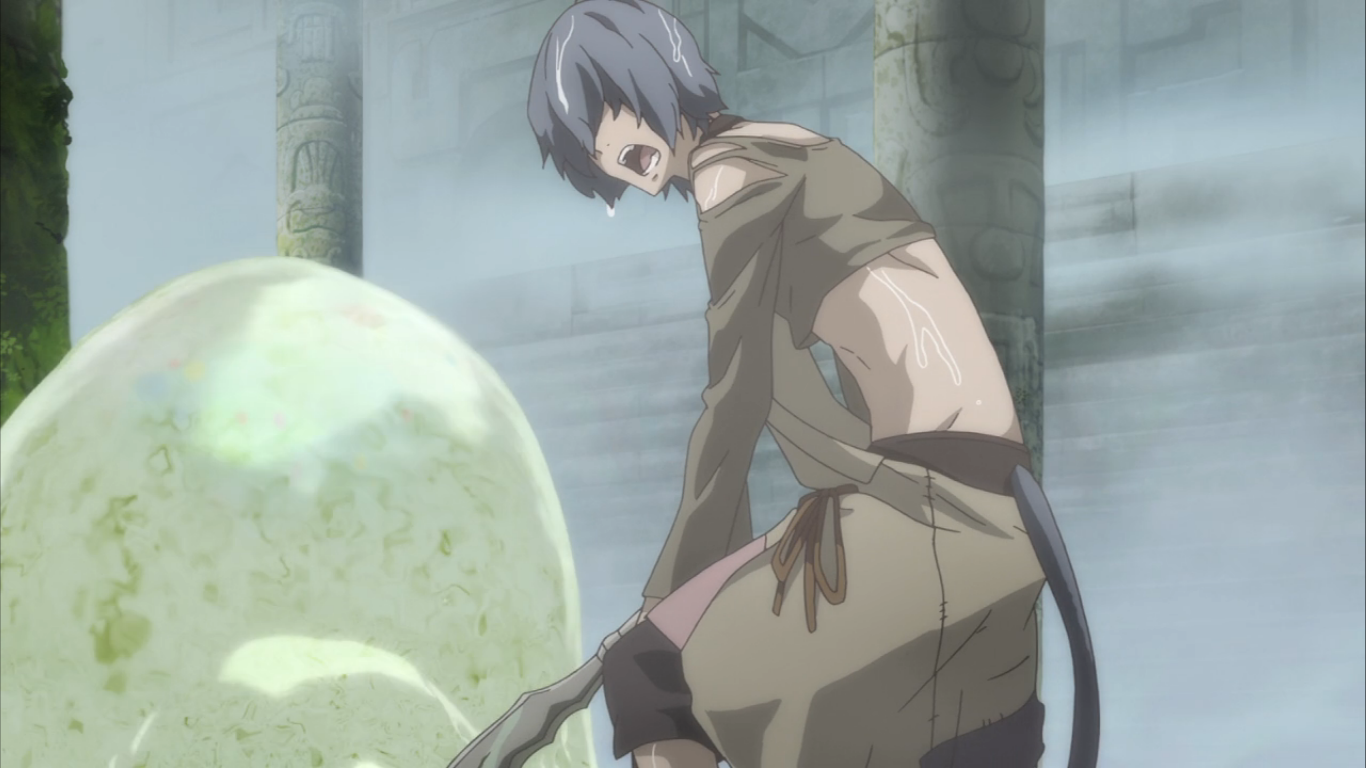 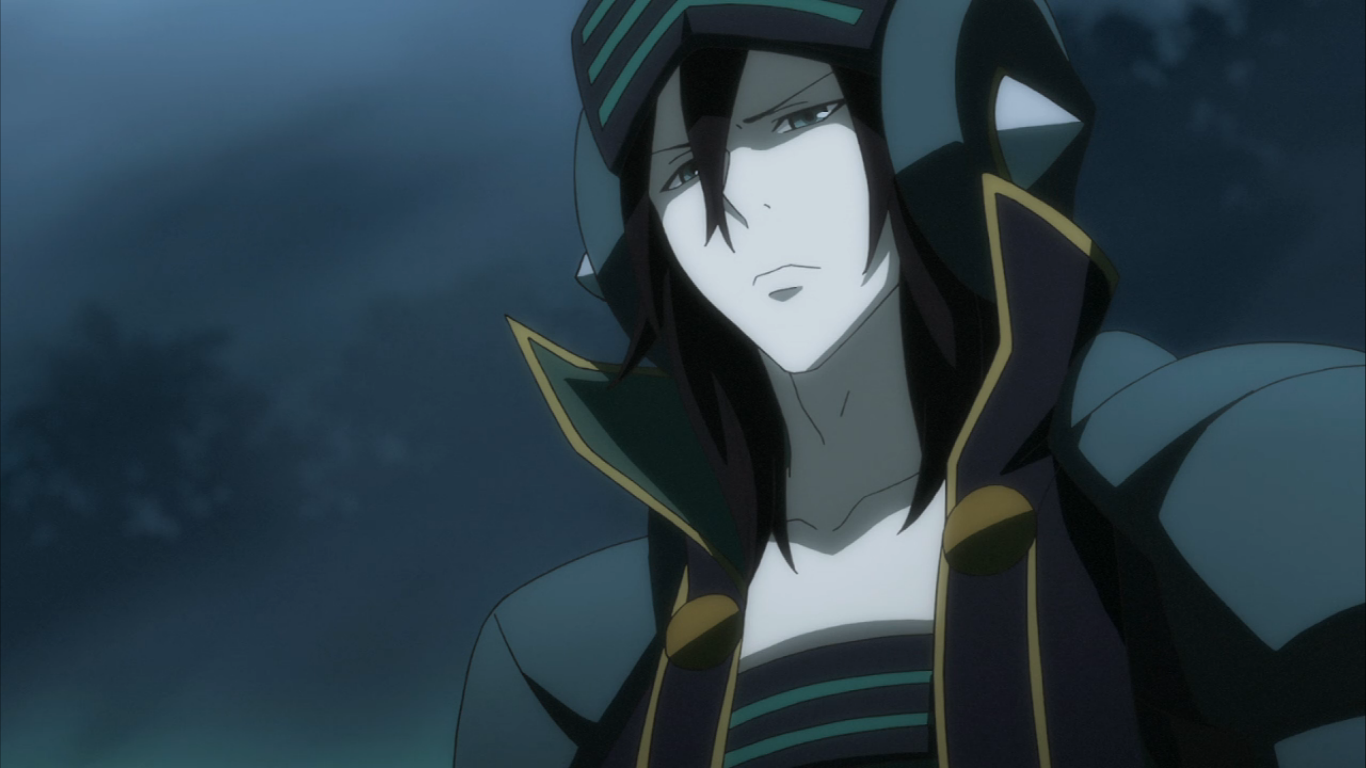 Rokka allays my fears by having a fantastic lead character in Adlet, who doesn’t so much mature as attain a state of self actualization.

Rokka allays my fears by having a fantastic lead character in Adlet, who doesn’t so much mature as attain a state of self actualization. He, along with all of the skills and powers at his command, are tested, and by those tests, finds out if his master was right to save and train him. For most of the show, Adlet is played by voice actor Soma Saito as an unknown quantity constantly bragging of his strength. Adlet never tells others what he’s thinking or reveals his ideas, theories, and fears until he absolutely has to. As a result, everyone who tackles him does so at their peril — risking not defeat in a fight (since Adlet is not as magically powerful as the others) but defeat overall once Adlet figures out their weakness. Nachetanya, as voiced by Yoko Hikasa, unlocks Adlet’s prison door in the first episode and trusts him to accompany her. She doesn't worry about his loyalty, even though she knows next to nothing about him, and even defends him at times to her captain of the guards, Goldof (Koki Uchiyama), who wants her to cut him loose. When you watch the show, you’ll find out why she trusts Adlet so much, but I’m not spoiling it for you. Suffice it to say that Nachetanya might have reasons to trust Adlet while others might not. I was a little undersold on Freemy Speeddraw (Aoi Yuki) since she’s clearly the otaku bait of the show. (She wears leather for everything, which is next to nothing, and she’s the quiet one.) Over the course of the show, however, her initial conversations with Adlet about not wanting anything to do with him or the other Braves give way to ridiculously complicated talks. Therein, Freemy tells Aldet the truth while he knows she’s lying or telling him what he wants to hear. As the show kicks into its second half and Adlet finds himself a suspect amongst the other Saints, the talks between Freemy and Adlet turn into something unexpected. I liked how Freemy reacts to their new relationship with unremitting hostility and how Adlet just remains himself all the way to the end with her. It’s not what you expect but more than you deserve. Since shows like this which don't have female leads falling head over heels from frame one with the hero don’t sell well with otaku, you should appreciate it while it is still streaming.

Rokka ends with the mother of all cliffhangers, and from what I can tell, the show might get that second season if all goes well. I really want to see the next part of the story and not just to resolve the ending of season one; I want to delve further into the world of Rokka and see if it becomes something bigger than what it started out as. That’s how all good fantasies usually go. 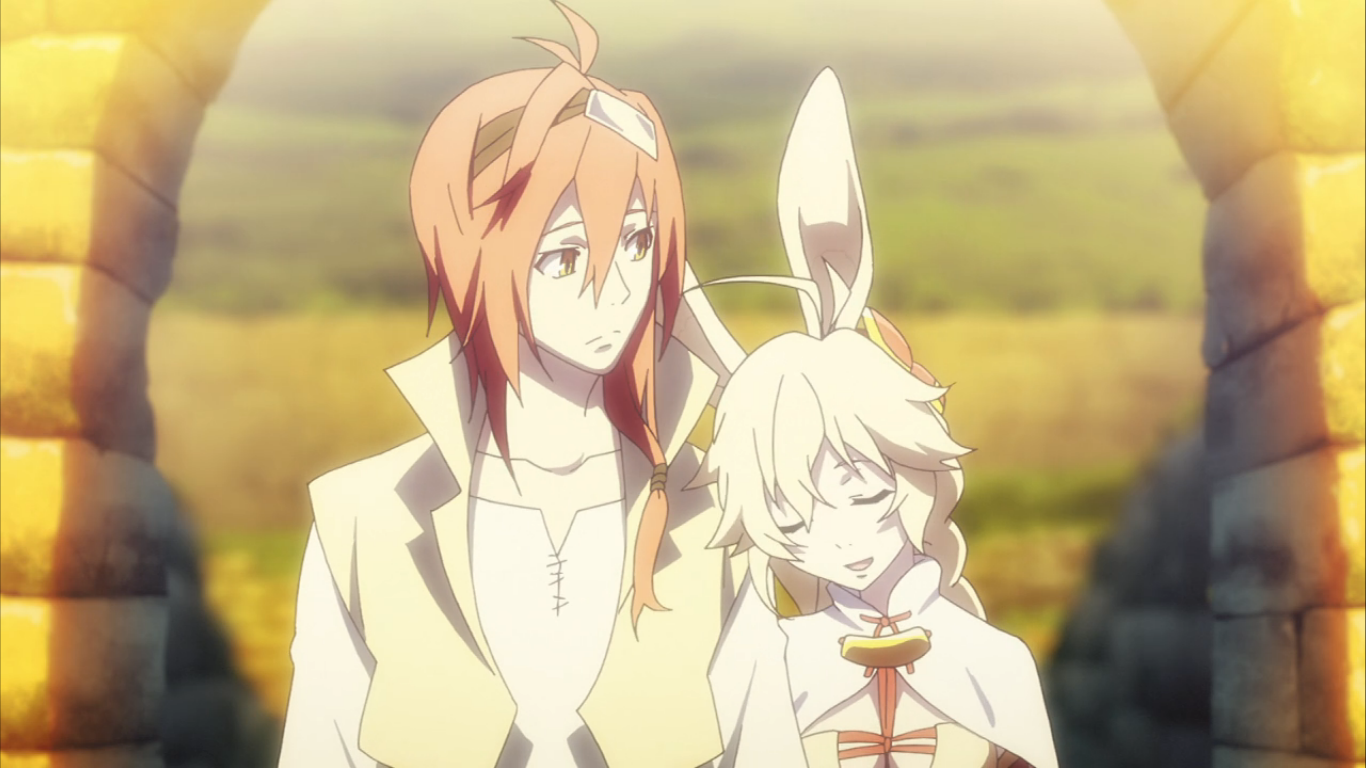