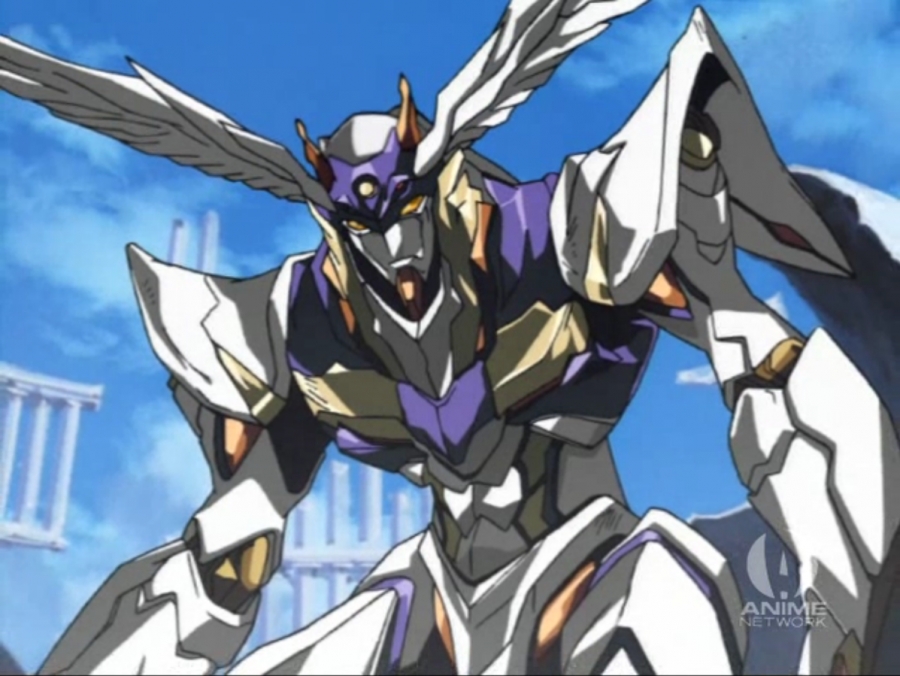 For this year's Anime Secret Santa, presented by the Reverse Thieves, I almost watched a saccharine, multicolored show about little girls solving silly, inconsequential mysteries. I thought this would be a bad idea, considering that I hate basically all shows of that ilk.

Instead, I went with what seemed like a safer choice. I chose to watch a show about a teenage robot pilot who finds that he is uniquely able to synchronize with a giant robot. An extra-governmental group begins using this robot and its pilot to combat alien invaders that periodically attack their base, and soon he finds that these aliens have some sort of supernatural connection with his own robot. Meanwhile, the boy takes up residence with a mature woman in the military, a young redheaded girl, and their pet. I know, I know, you're wondering why anybody would still review the seminal anime series Neon Genesis Evangelion; its been pored over by countless reviewers since its 1995 release. Well, that's the thing...

This isn't Evangelion. This is a show from 2002 called RahXephon.

That's right, add a little more detail to that description and you get the story of Ayato Kamina, his mysterious winged robot RahXephon, and a series of attacks from an alien race called the Mu. There are, of course, a few differences; for one, Ayato is not a chronically depressed loser like Shinji Ikari in Evangelion, so all the wimps who couldn't handle Shinji can rest easy. Furthermore, he's is a former resident of Tokyo Jupiter, the Mu-occupied city of Tokyo that lies inside of a giant protective sphere (called the Jupiter sphere due to its resemblance to the planet). In the outside world, he comes under the wing of Haruka Shitow, the woman who got him out of Tokyo and into the custody of anti-Mu unit TERRA. 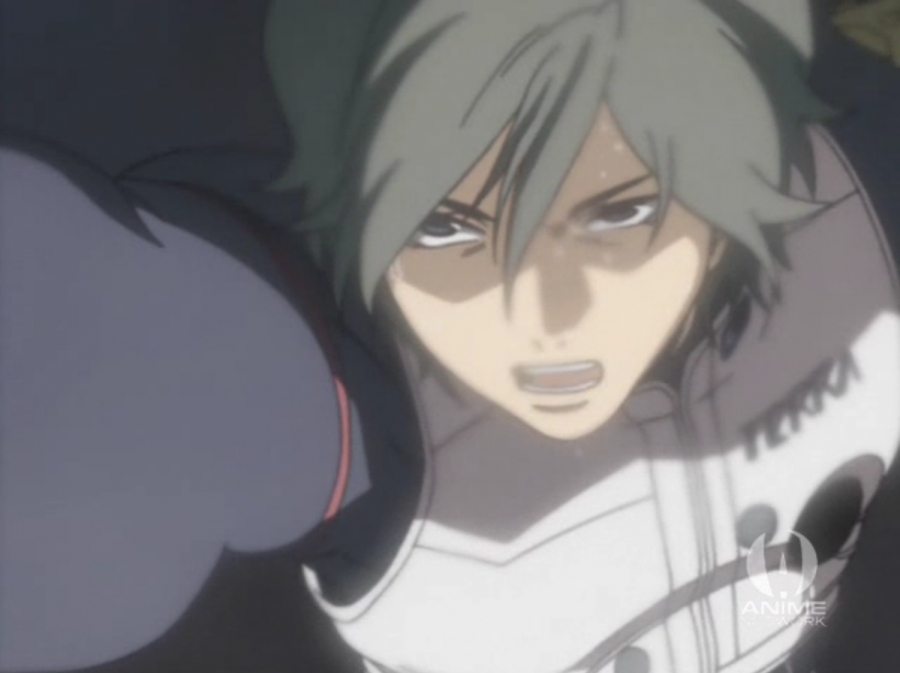 To be clear, similarity to another story doesn't make anything bad. No one will deny that RahXephon is heavily inspired by Evangelion, but in the hands of a sure-footed director, a clever writer, and capable staff, it's always possible to make something new and exciting from old components. Just look at the super-fun '80s OVA Bubblegum Crisis, itself a blatant rip-off of Blade Runner!

Let's start with where the show gets things right. For one thing, RahXephon has some nice mechanical designs. Many of the battles take place over the water, so there are a lot of aircraft carriers, planes, and other water- and air-based vehicles, all of which have nice, detailed designs with expert line art. I was immediately reminded of some of the mechanical animation in Cowboy Bebop, which shares a lot of staff with RahXephon (BONES, the studio behind the show, was formed by ex-staff from Bebop studio Sunrise). Meanwhile, the RahXephon and the Dolems — the giant stone monsters that the Mu use to attack TERRA — have unique designs, all centered around prominent mouths that use song as a weapon. And that brings me to the main thematic hook of the series.

RahXephon is "that robot show where the robots sing." 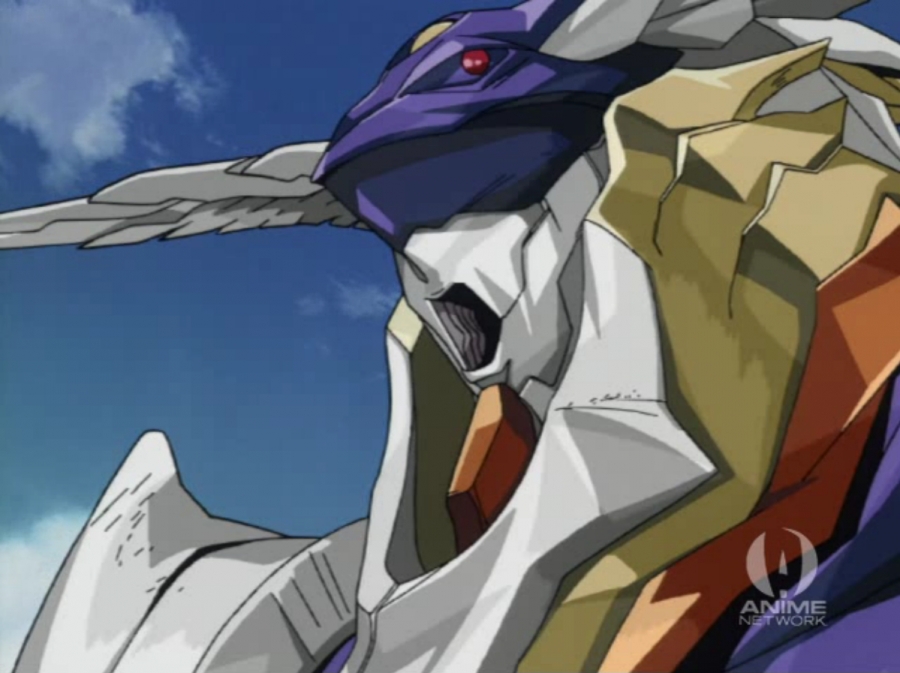 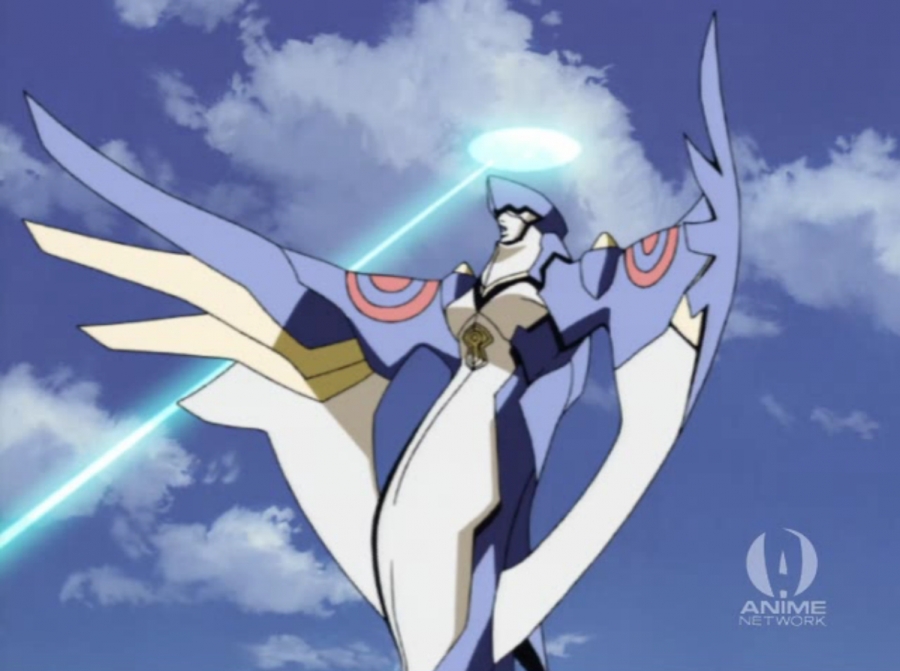 RahXephon is "that robot show where the robots sing." Its defining feature that allows it to pretend to not be a re-skinned Evangelion is music. Characters sing to activate their robots, and the robots sing to attack their enemies. There are references to classical music, episodes are called "Movements," and the Dolems have names like Alegretto and Vibrato. If you're into music and giant robots (as I am), this combination might pique your interest. If you're into good stories, though (as I am), I suggest you look elsewhere.

The series hops around from idea to idea, trying with all the desperation of a sleepless college student working on an essay at 3 AM to create something meaningful from all its unrelated nonsense. One moment the characters will spout pseudo-philosophy about the "tuning of the world," and the next they'll be referencing the Mayan apocalypse. Skip five minutes ahead in the episode and time dilation will be a big theme. It's too much. Even when things do fit together nicely, the writers are trying to jam too many things into the show for too small of a payoff. In the end, RahXephon is trying to say "humans have free will and love is pretty cool." It's a whole lot of clumsy sleight-of-hand to reach a pretty mundane conclusion. 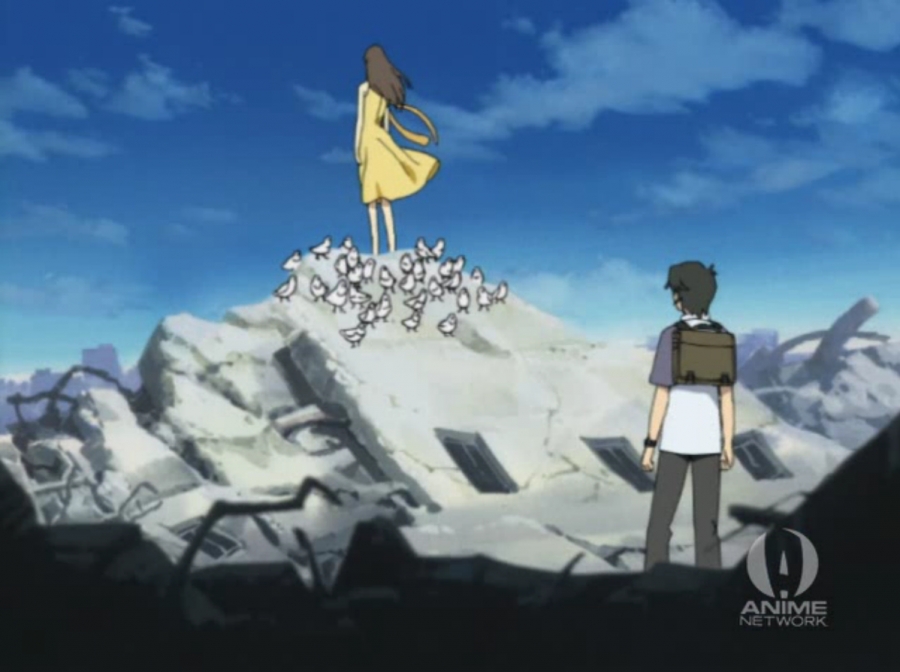 Major plot points are revealed without a lick of fanfare, leaving you to piece together seemingly inconsequential facts to construct a conclusion that's not really all that interesting.

An abundance of ambition wouldn't be so bad if RahXephon would just explain what it's doing. The show's writers — including Serial Experiments Lain's Chiaki J. Konaka — seem to assume that "cryptic equals intelligent," opting to leave major plot points unexplained so that we can "figure it out." Now, don't get me wrong — I love Lain (I wrote a glowing feature in a recent Otaku USA issue), and it's very cryptic. However, Lain has two things going for it. Firstly, it's entertaining on a surface level due to its unique presentation. Secondly, by the time you finish watching, the important plot points have been laid out for you. Figuring out the underlying themes is up to you, but the facts are clear. In RahXephon, Konaka doesn't even give you that much. Major plot points are revealed without a lick of fanfare, leaving you to piece together seemingly inconsequential facts to construct a conclusion that's not really all that interesting. There's a phrase that sums up RahXephon's problems, and as much as I don't like it, it really is appropriate here.

RahXephon is trying too hard.

It's that simple. RahXephon's problem isn't that it's inspired by Evangelion. No, its core flaw is that it wants to be Evangelion. This desperate need to be Evangelion is the reason for all the needless obfuscation. And the result is that RahXephon is empty. It's a shell of Eva, formed from its outer contours but lacking its substance. RahXephon's successes are few and small, its failures frequent and systemic. It's not completely terrible — it has some likable characters, exciting battles, and surprisingly human moments — but that's the trap. The road to the good parts of RahXephon passes through interminable hours of childish directorial grandstanding and meaningless, cryptic bullshit. It is not a road worth traveling.

Now excuse me while I regret not watching Milky Holmes instead. 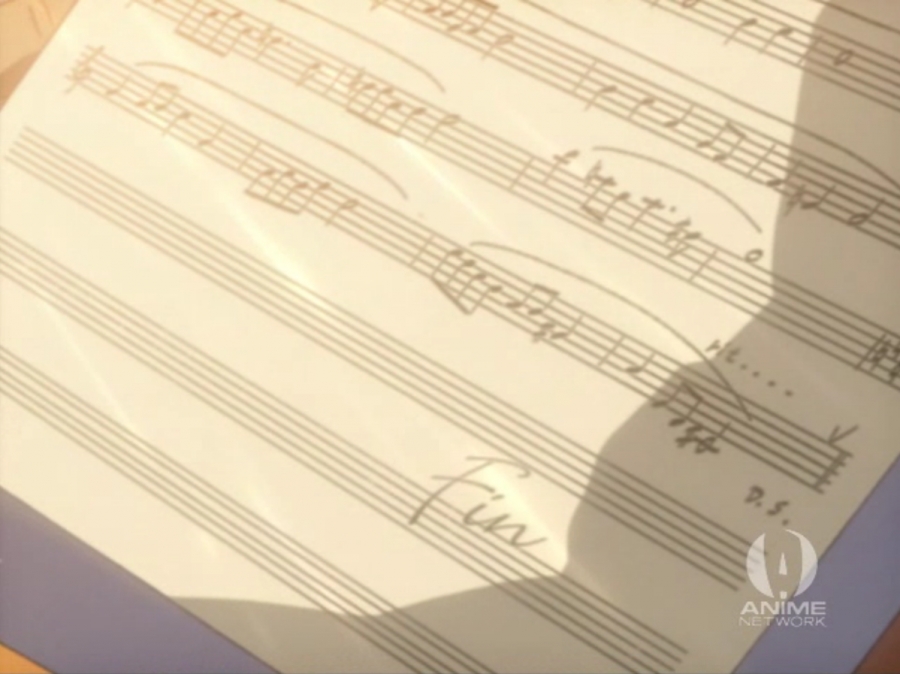 This review is based on DVDs borrowed from the RPI Science Fiction Association anime library and an Anime Network streaming subscription paid for by the reviewer.