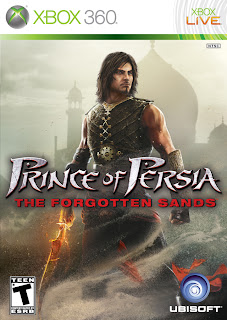 Prince of Persia: The Forgotten Sands (PoP: TFS), chronologically set between PoP: The Sands of Time and PoP: The Warrior Within, follows the Prince en route from his fathers palace to meet with his brother, Malik, at the ruins of King Solomon's palace.  An encroaching army forces Malik to release the fabled army of King Solomon despite the Prince's repeated protests.  Alas, history is a mass of incorrectly translated idioms, and instead of releasing Solomon's army, Malik releases the army — an army as numerous as the grains of sand in the desert — that was created for the purpose of destroying the famous king.  The medallion used to break the magic seal that formerly contained the evil breaks in two, allowing the Prince and his brother to scurry about collecting powers from defeated enemies.  Malik grows corrupt with this power, and both princes grow distrustful of handing over their half to the other to seal away the Djinn-led army.

Half of the game is spent trying to reunite with Malik, and the other half is spent dealing with the surrounding evil. I don't know whether PoP: TFS felt easier due to my lengthy replay of its predecessors or if the new game is just inherently easier, but the lack of a hard difficulty (even after beating the game on a very easy-feeling Normal) may be a clue. Puzzles are sparse and, aside from the select few that subtly require the use of the Prince's Djinn-given powers, can be figured out in a couple of moments upon the first encounter. Similarly, the acrobatic paths required to navigate all the maps are so obvious that one could either compliment the camerawork for guiding the player or chide the level designers for offering up such an unambiguous environment. That said, the acrobatics (which I'll get to later) are what make this game ... especially when you take the fighting element into account. 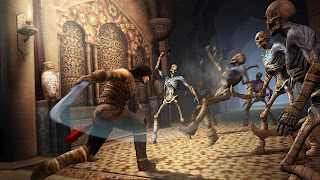 The games comprising the Sands of Time trilogy have always walked a delicate balance between acrobatics and combat, leaning to one side or the other in any given iteration.  PoP: TFS is no different but rather attacks the issue in a different way. Here, the Prince faces off relatively frequently against hordes of up to around 20 enemies, most of whom don't require more than two sword blows to finish off, whereas the previous games had the player simultaneously facing, at most, five or so moderately challenging opponents. The difference is rather brilliant: make the battle element that of a button-masher to let the player feel accomplished in having dispatched so many minions while saving the real effort and time for the subsequent navigation. While the button mashing does get a bit tedious, there is a semi-decent variety of enemies, a few different combat moves, as well as ice, fire, and wind spells that can make each onslaught different enough to avoid becoming totally stale. 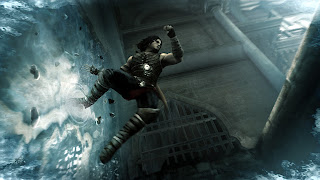 But acrobatics are the bread and butter of PoP: TFS. While the path the Prince must take may be all too easily discernible, that does not mean the path itself is easy. The Prince gains the power of the Djinn and with it can rewind time as well as freeze the flow of water to make it a navigable surface. A specific Djinn, Razia, also gives the Prince her familiarity with the now crumbled kingdom so that broken pieces may be made whole once more (but only one section at a time). Combine those aspects with already familiar movements, like wall running, pole swinging, ledge climbing, and bird hopping, and keeping track of what button does what can become your own worst enemy within maps intricately constructed to test dexterity (the Prince's as well as your fingers’).

Controls are spot-on, but some of the Prince’s moves feel unrealistic (compared to the earlier games).  These range from being able to run straight up a wall after jumping to it, running up walls after hanging statically from some exposed part of it (protruding stone or ledge), and bird hopping.  The action used to accomplish the latter is reminiscent of the 2008 PoP game: a power of flight aspect that just feels entirely out of sync with the rest of the physics in PoP: TFS.  Easily, programmers could have just added another bird onto which the Prince could jump or bring the ledges a little closer.  Believable or not, the gameplay is very fluid, even if it seemed to lag a bit, and the in-game camera, usually the bane of the series, is almost never an issue.

Steve Jablonsky's musical score is both appropriate to the theme of the game and complementary to each level's beautifully rendered aesthetics. My favorite touch regarding the latter is the random placement of sandstone statues, formerly living palace guards, that continually try to hold fast slightly open doors or otherwise stand and lie frozen in place. Their presence adds an eerie ambiance to a palace worn away with an omnipresent evil (sand) that wisps through those same crevasses. However lovingly crafted, cutscenes still smack of the earlier titles’ blocky renderings at times. Given the history of criticism behind the voice acting, it is also worth noting that Yuri Lowenthal reprises his role as the well-humored, sarcastic Prince from PoP: The Sands of Time and PoP: The Two Thrones.

I was so engrossed with the gameplay of PoP: TFS that it felt disappointingly short ... especially with the terse ending. The story is one big action movie cliché, but it's one that's fun to take part in and shares a good deal of elements with the original Sands of Time series. Sadly, PoP: TFS falls short on heart and introspective depth, making it akin to a deleted scene or bonus featurette rather than its own story. The insulting nature of this perceived brevity is compounded by the game’s only other mode of play: an Arena wherein the only wave of opponents consists of an eight-course serving of butter. I picked this title up on a whim one day at Best Buy for $20. If I had paid any more, I think I would have felt ripped off, but Prince of Persia: The Forgotten Sands is definitely worth your time to rent (or buy if the price is right).