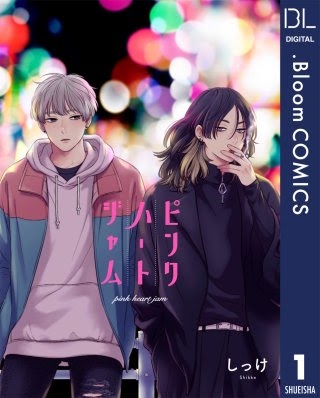 Spoiler alert, and also this manga is very NSFW if that’s the kind of thing that might bother you.

Pink Heart Jam by Shikke and translated by Valentina Casetta brings the reader into a bittersweet love story about the messy intersection of sex work and personal life. Although the protagonists — cheerful country boy Haiga and brooding, aloof Kanae — are brought together initially by music, that doesn't seem to allow them a shared sense of identity or expression even at such a crucial part of their young lives. After falling for Kanae’s effortless cool, Haiga visits a “box spa” (a euphemistically named brothel skirting Japan’s laws regarding sex work) in the famous Shinjuku Ni-Choume district in an attempt to definitively answer for himself if he likes men. Naturally, the person working at the lotion play specialty box spa is Kanae. 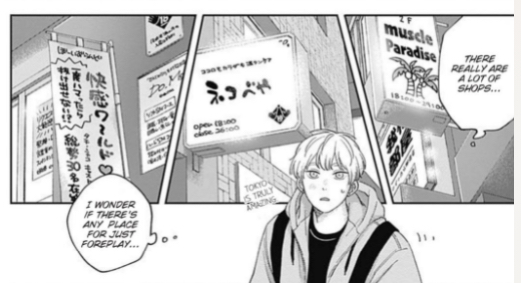 The awkward nature of youthful first sexual experiences jarringly crashes up against the reality, the formulaic efficiency, of sex work.

In the most memorable and important scene in the manga, Haiga confronts a first-time sex work customer's understandable, but not very helpful, response of not wanting to be a drain on a sex worker's time. He is part nerves at the prospect of his first same-sex experience and part starstruck by Kanae. However, Kanae reponds with a sex worker's dispassionate attitude towards their job. This creates a memorable interaction where the awkward nature of youthful first sexual experiences jarringly crashes up against the reality, the formulaic efficiency, of sex work.

Kanae is everything Haiga isn't: comfortable and confident in his sexuality, aloof and mysterious, experienced enough in the conventions of queerness to adequately describe himself using shorthand. And in addition to Kanae’s ample experience, he has the language, the tools to express himself, that Haiga, trying to figure out if he even likes men, doesn't. Haiga starts spending all of his money at the box spa, working more at his part time job to afford to be able to do so. Many Japanese university students look on their higher education as something of a respite between the soul-crushing pressure of high school and the famously exhausting world of Japanese working adult life. Through that lens, it’s hard not to see Haiga dividing what little time he has between pulling all-nighters for his studies and picking up extra shifts at his part-time job just to be able to afford frequent box spa visits as a raw sacrifice.

An uncountable number of works have used music as a way to explore youth, but few anywhere as effectively as Pink Heart Jam. In an era where re-releases outsell new music, musicians struggle to make any money at all from their music (let alone enough to live off of), and dad rock has turned into fascism, the manga calls into question if there was ever really any rebellion in music. The big music performance of Kanae and Haiga’s band (not even a band — Group D at a music camp), which would be the climax of any other work and maybe even lead to their band being discovered, takes place before a rapt crowd for half an hour and is definitively over thereafter. 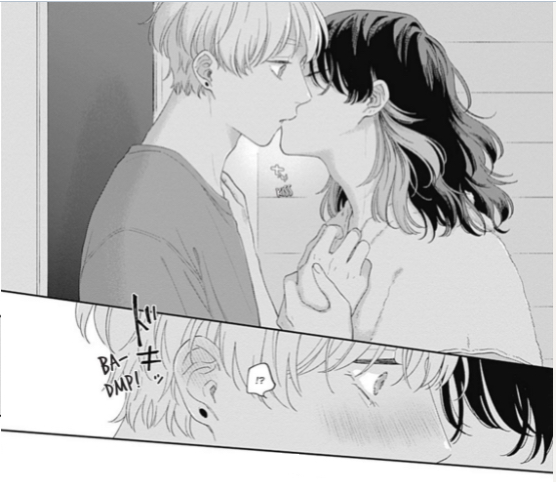 The characters desire for each other reaches a nadir with a stolen sexual encounter as the other characters leave to watch fireworks. Haiga and Kanae awkwardly try to figure out penetrative sex with their time, with Kanae having difficulty separating himself from his job as a sex worker and Haiga unsure of how far they’re actually able to go.

The manga does an incredible job of painting Haiga and Kanae as characters and letting you understand the journey that brought them to this moment.

Towards the end of the manga, the physical and mental toll of Kanae’s work catches up with him, making sex work (an already fraught profession) more of a danger to himself. Kanae’s growing attraction to Haiga frustrates him; as much as Haiga aspires to Kanae’s cool, Kanae admires Haiga’s easy popularity, especially amongst women. He even confesses to Haiga that he finds himself attracted to straight men with girlfriends out of a misplaced desire to be treated like a girlfriend, with the unspoken fear that he can’t find a heteronormative happiness.

Despite being a very short six chapters long at this point, the manga does an incredible job of painting Haiga and Kanae as characters and letting you understand the journey that brought them to this moment. And the manga is not finished, so there are still many exciting possible avenues the story could explore.

The quiet and sad tone of Pink Heart Jam is like getting splashed in the face with water on a cold day and really carries the manga. It’s a big hit in Japan, so even big readers of BL stories (which I admit I’m not particularly) who have seen a couple of the tropes here innumerable times before will definitely enjoy the story. It captures something difficult to put into words about youth in the 21st century, about being young and disaffected, about trying to actively carve out an identity for yourself in a cold and uncaring world. 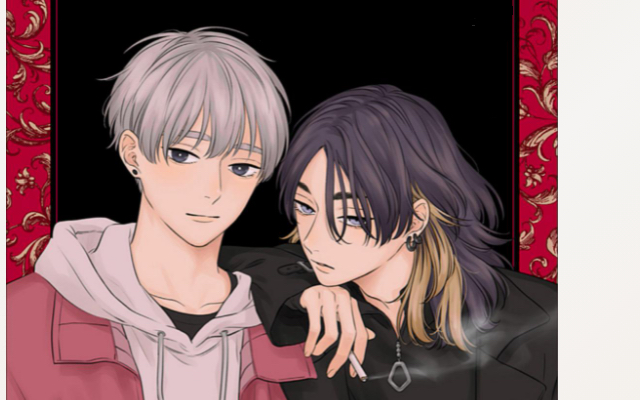 This review is based on a copy purchased by the reviewer