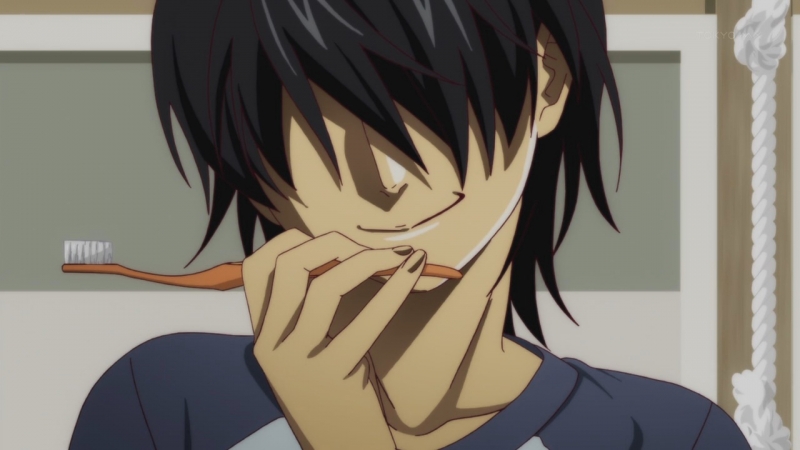 From title to content, Nisemonogatari, which roughly translates as "Fake Story," is in its entirety a deception of viewer expectations. Nise, the second anime adaptation of writer NisiOisin's popular light novel (LN) series, challenges what is expected of LN-style fiction while reveling in typical anime-caliber scenarios. Interestingly enough, the writer has discredited this particular work as professional writing with the mentality of a fan, suggesting it is a work that perhaps should not have been published. Nevertheless, the fact is that his editor got a hold of the novel and deemed it suitable for market. Unsurprisingly, everyone that has read it agrees that it is the weakest entry in the Monogatari series. Undaunted by public opinion, Akiyuki Shinbo took a shot at working the usual SHAFT miracle for Nise that made its predecessor, Bakemonogatari, one of the highest-selling television anime shows ever. Just as Bake put some viewers off with its artistic slideshow-style animation set to overly clever, occasionally sexually-charged, banter between teenagers, Nise is just as divisive — if only for a different set of reasons.

The greatest challenge to begin enjoying Nise is to abandon attachment to most of what was enjoyable in Bake. Bake begins interestingly enough as a sort of supernatural reverse harem (in the chronological sense), where the protagonist settles on a girl first and wanders the town collecting members for his harem afterwards. The 15-episode series tightly compresses two novels worth of character arcs, moving as quickly as text-dense adaptations allow. Despite how the story only seems to move through the sheer might of the sexual tension in some scenes, I will say that Bake has surprised me with the level of sincerity imparted to its characters and how they grow and bond with each other within the relatively short running time of the series. 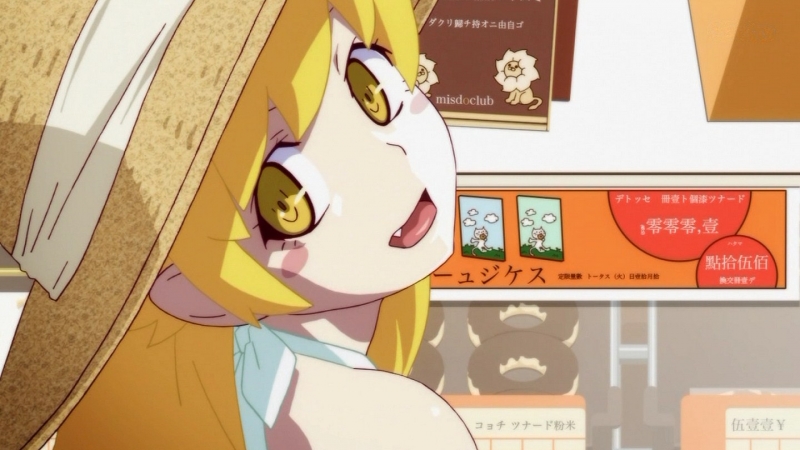 Nisemonogatari matches, if not improves upon, all of Bakemonogari's strengths in a technical sense. Taking a few broadcast seasons off to focus on their craft and roll in all that Madoka money has made all the difference for Studio SHAFT. They scale back on most of the shortcuts taken in Bake — empty black screens, literal walls of text ripped from the novel, still-frame montages — and actually animate what's happening in unusually splendid detail. The luxury of time and funding means minute physical character tics are placed throughout and that all characters are actually drawn on-model by the time of broadcast. Shinbo's visionary apporach to anime is in full effect for Nise, working sight gags for all they're worth and disregarding any notion of spatial continuity to wonderous effect. Nise triumphs over Bake in that characters rarely sit around to talk; they roll around, do handstands, get into earth-shattering fights, hop across works of post-modern public sculpture, and leave the realm of reality to speak in their inner voice. Nise captures that breath of life in its animation that was missing from most of Bake due to budgetary constraints.

Problems arise for Nise as it moves away from the promising set-up of the first novels. The original Nisemonogatari novel is split into two character arcs covering the protagonist's delinquint younger sisters' involvement with dangerous supernatural phenomena. NisiOisin relegates the principal heroine of Bake and her rival-in-love to supporting roles far away from the action of Nise, though trimming the cast does not give the project any tighter of a narrative focus. The first arc trudges along in the background before abruptly resolving in a most ungratifying manner. The second half isn't much more engaging, but at least there seems to be a deliberate attempt to engage the audience before the end.  The titular characters of each arc might only appear for a few minutes of screen time in some episodes, if at all, and the author doesn't utilize the newly introduced characters much either. Nise feels a lot like an extended intermission between Bakemonogatari and the next book.

As incongruous as Nise seems, it really is the logical (within Nise's personal construct of rules) place to end up after Bakemonogatari. The protagonist has already solved the problems of the members of his harem to a workable degree in the previous series. Bake ends satisfyingly enough, so forcing in a new plotline out of nowhere wouldn't work out. Instead, Nise's continued dialogues between characters further flesh out the kind of people they are and highlight their positions on the harem totem pole. What really works out for Nise, though is that it dissolves the protagonist's Nice Guy hero image from the first series. Even with complete power over the narration, he can't hide some decidedly un-Nice acts. The best writing in Nise comes from seeing the protagonist grapple with the disgusting side of himself as he tries to fight back his urges. I can only reference the actual Monogatari text beyond Nise in a very limited way, but I have the impression the seeds sown in Nise only produce fruit after this story is over. Whether anyone still cares about character dynamics might not be easy to ascertain over the noise caused by Nise's actual draw-in. 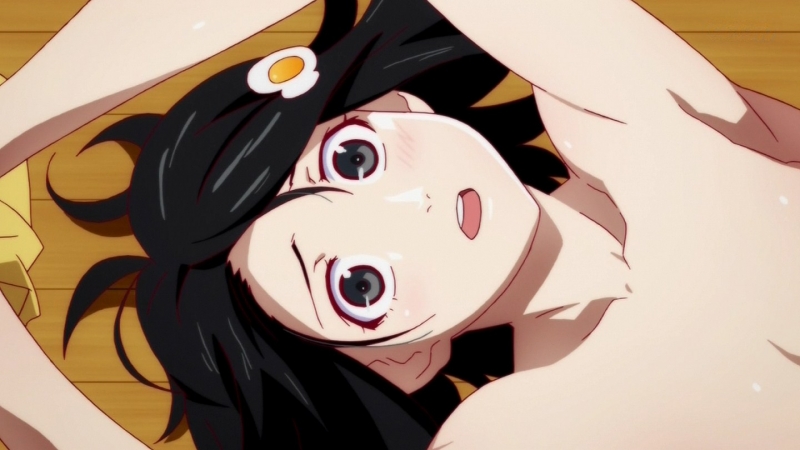 Now I've finally arrived at the most polarizing element of Nisemonogatari: it's damn sexy. After about four episodes, there isn't a viewer left who can say they watch Nise for the plot without lying through their teeth. Anime conservatives will crawl back under their safety blanket at the sight of dead elementary schoolgirl upskirt shots, extended conversations with fully nude loli vampires, chiseled male and female collarbones, slavishly drawn bare feet, little sister kimono unravelling, and a lavishly animated toothbrushing sequence that establishes itself as a pivotal moment in changing brother-sister relationship conventions. Bake could get pretty hot when it wanted to, but Nise completely overblows the sex appeal. Factor in SHAFT's keen eye for framing, VOfan's attractive character designs, and NisiOisin's bold situational writing, and you have a product that trumps most standard ero-anime.

The effect is noticably ampilified considering the restraint previously shown by Bake that allowed the audience to grow fond of its characters without a reliance on sexuality. Even higher-leveled anime viewers who are normally okay with inappropriately sexualized underage girls find Nise to overstep the boundaries of dignity the general Western anime community have set forth. As lovingly crafted a sexploitation series NisiOisin and SHAFT have given the world, it's still an exploitation bound to discomfort those who haven't completely embraced their true otaku power. Watching Nise is nowhere near as shellshocking of an experience as, say, watching In the Realm of the Senses. As a major commercial late night television anime, however, it easily crosses over into that zone where viewers will want to take a step back and reexamine their motivations for watching.

Nise is as inaccessible as viewers will make it out to be. On many levels, it's a lot more fun to watch than Bake and certainly more polished than a lot of other work SHAFT has done. On the other hand, Nise leaves us in the middle of a messy web of character relationships that begs resolution. While the sexuality rarely pushes the plot forward, the show would be drained of its energy if the sexuality were taken out. And somewhere under the surface, Nise almost has the right idea in its approach concerning the topic of underage sexuality. The execution, however, is a failure from inception, as the work is clearly aimed to sell wishful fantasies to that crowd of esteemed gentlemen who have no qualms about loving young, idealized 2-D girls. 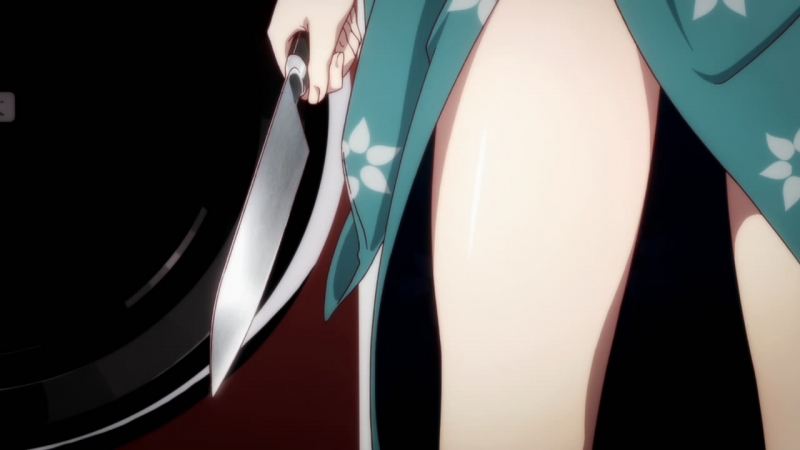 SHAFT's next adaptation, Kizumonogatari, with its promise of gory vampire violence, will likely take back all of the attention lost during Nise. By no means is Nise the gravest mistep in Japanese young adult literature, but from here on out I hope NisiOisin's other Monogatari novels give SHAFT a little more to work with.

This review is based on the Crunchyroll simulcast.