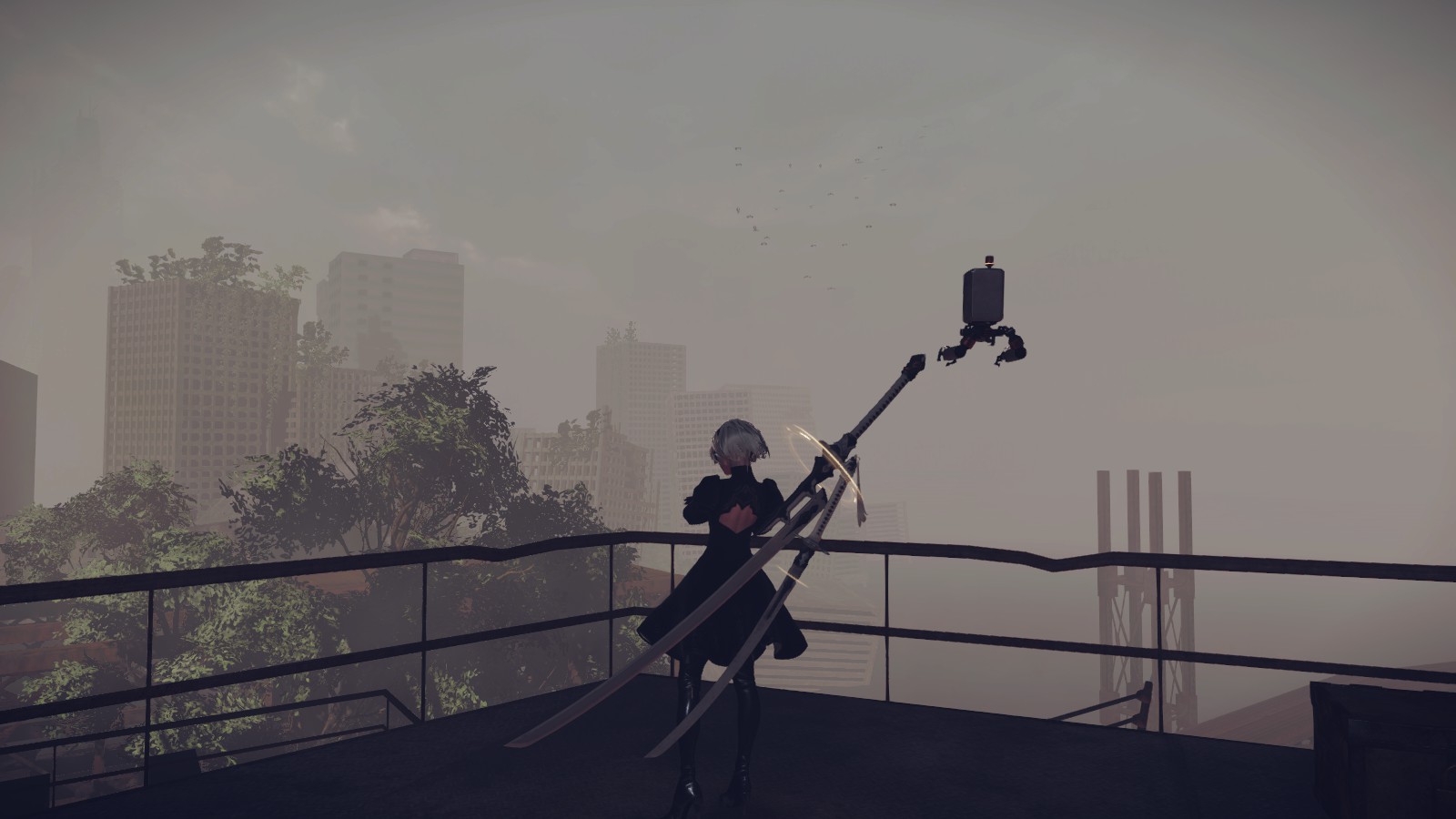 I want to get this out of the way before anything else: the PC port of NieR: Automata is complete garbage. It sucks. There are showstopping bugs that have gone unaddressed by Square Enix and Platinum Games, now four months since the last official word on the status of a patch. Even if you can manage to get the game to boot in spite of widespread video card-related issues, I can’t exaggerate how poorly optimized this game is on PC. Gamers will be better served tossing their GPUs into a woodchipper if they’re running anything less capable than a GTX 1060, it’ll be a more gratifying experience than trying to work through the awful framerates and syrupy slowdown.

What could be a fairly standard “war against the machines” narrative goes to some very interesting places very quickly, with major plot developments occurring as early as the end of the introductory stage.

That said, NieR: Automata itself is a fantastic game, albeit burdened by one of the worst porting jobs in recent memory. Somewhere in this mess, there is a deeply compelling core that kept me going. Automata is part of a recent string of Japanese-developed games that utterly kill it with the attention to design and presentation, with Breath of the Wild immediately coming to mind from March 2017’s unseasonably cluttered release slate. Ironically, Zelda is the game NieR riffs most heavily on, and director Yoko Taro could be forgiven for falling into despair at the idea of competing directly with a flagship title that brought on the launch of the most hotly anticipated Nintendo console since the Wii.

Automata advances the storyline thousands of years into the future, in an era where humans have abandoned the earth and robots roam through cities reclaimed by nature. The surviving remnants of humanity have colonized the moon and employ a unit of androids known as YoRHa to take the earth back. The robots, in the meantime, seem to have developed oddly human behavior patterns and are not ready to yield before the former dominant species. What could be a fairly standard “war against the machines” narrative goes to some very interesting places very quickly, with major plot developments occurring as early as the end of the introductory stage. The original tagline for NieR is “Nothing is what it seems,” and Automata knows that returning players know what to expect and thus goes all out to throw everyone for a loop. 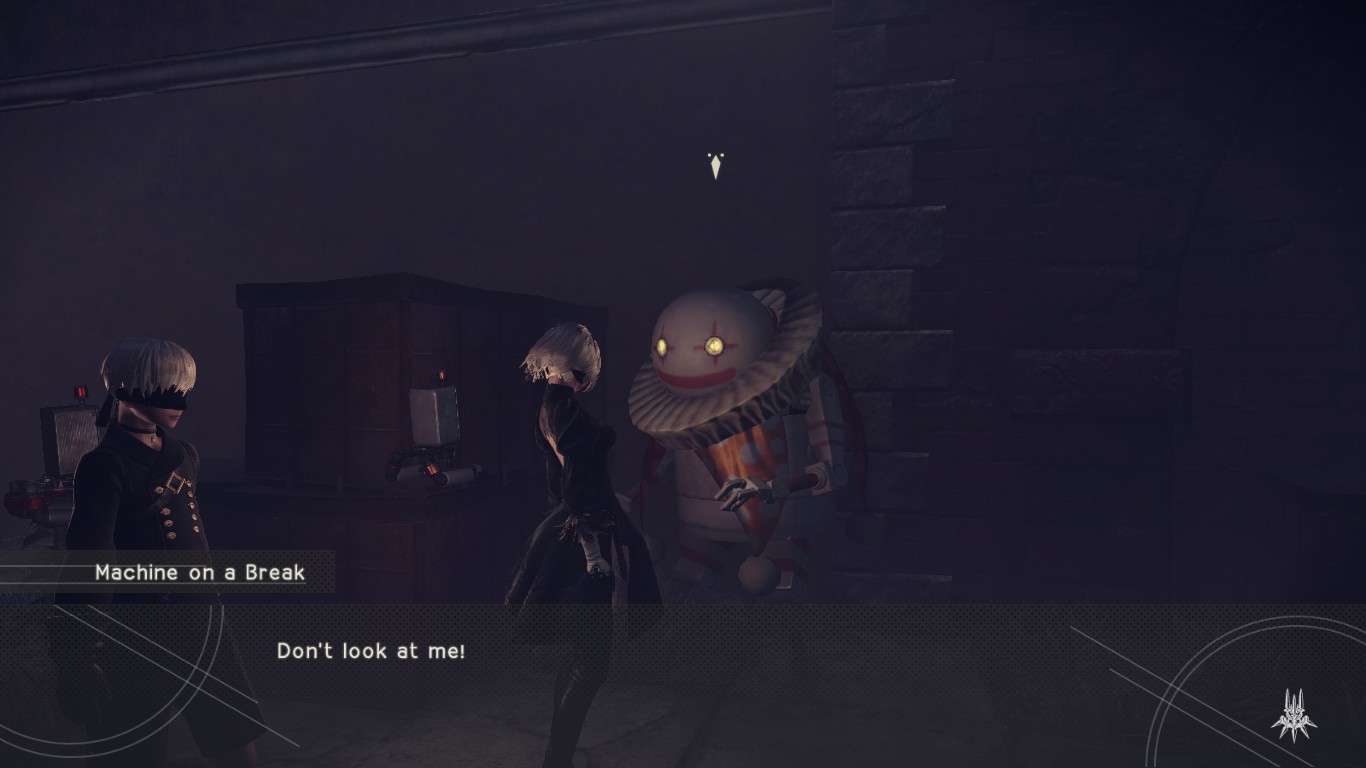 Whether you prefer to rush in and smack robots around with maxed out offensive buffs on heavy weaponry or turtle up with auto-healing bonuses, they're all viable strategies.

Backed by some of the best music and voice acting recorded for a video game, Automata stands apart from games content with being games. It’s just as cynical about the medium as its antecedent but whether it’s the wisdom acquired over the years or begrudging mercy for the audience of this multi-million dollar piece of software, Automata is actually fun to play, more often than not. The meat of the game, the hack-and-slash combat, elevates the mindless brawling of NieR from routine button-masher to an artform. The combat-focused android 2B moves like the animation team’s collective jobs depended on it, exuding a calm confidence unseen in generations of macho male action heroes.  The masochistic nature of the quests in NieR, legendary for being a complete pain in the ass to 100% complete, has softened quite a bit in Automata. Vital resources for skills and weapon upgrades are bountiful and you’ll never need to stress about equipment beyond setting the right configuration of passive bonuses. Whether you prefer to rush in and smack robots around with maxed out offensive buffs on heavy weaponry or turtle up with auto-healing bonuses, they're all viable strategies, though be warned: Automata implements a perma-loss feature on the stat-boosting chips. If you die once, you leave a body behind with all your equipped chips and if you fail to get your body back, those chips are gone forever.

Though Automata improves on nearly every returning aspect of NieR, I have a number of hang-ups with the game beyond the glitches. The “open-world” nature of the game feels oversold as it’s more like a series of big rooms connected by very thin hallways. Some of the areas don’t have a lot going on and yet if you’re trying to clear quests, you’ll find yourself coming back to the same places again and again. It takes maybe two or three regenerations of the same enemy mobs in any given area for you to figure out that it’s far more effective to outrun these encounters when moving from objective to objective. The game does a fine job of deceiving players into plowing through hours of gameplay that's fun once, but grindy and repetitive on the second go. Walking everywhere gets monotonous real quick but there are quick-travel nodes all over the map that also function as save points. It's more of a preventative measure to keep players from saving in areas where the game may break and strand someone in an impassible dead end. Automata is an ambitious game but perhaps not built to the titanium-grade sturdiness of higher budget AAA games. 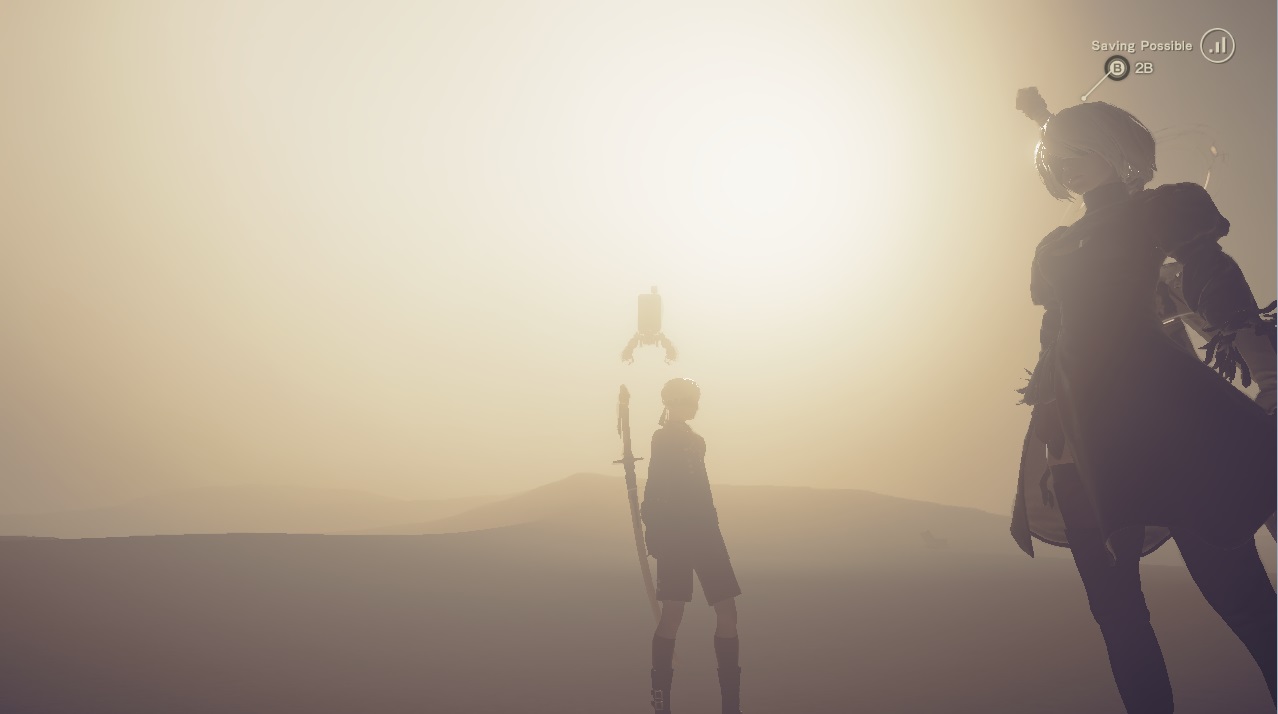 Automata deserves far better treatment than what the publisher has shown capable of, but it doesn’t take away from its accomplishments. It offers further proof that Japanese game development is still alive and kicking, if anyone needed to be convinced. It’s not a new IP but it is an inspiring success that rises to the call for original and inventive games. The dilemma I find myself in now is that I can’t recommend the PC port and I can’t speak for the experience on PS4. Whatever your means may be, do yourself a favor and play this game before you hear anymore about it.