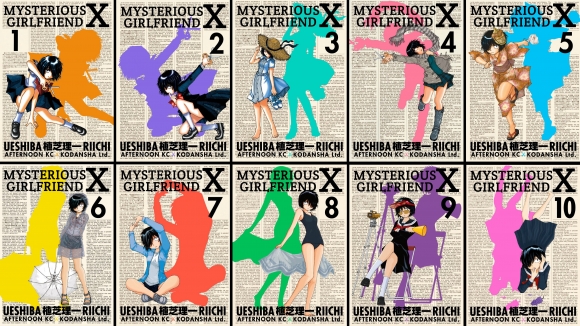 If you stomached any or all of its Spring 2012 anime adaptation, you should already be familiar with Mysterious Girlfriend X (Nazo no Kanojo X)—the boy-meets-girl seinen serial in which a boy named Tsubaki tastes the left-behind drool of his female classmate, Urabe, and consequently becomes mentally and physically dependent upon it. Lovesick is perhaps an all too apropos compound word for Tsubaki’s condition. He cannot go more than a couple days without a dose of Urabe’s “medicine” lest debilitating symptoms akin to those of the flu start to manifest. This is all ok, by the way, with Urabe, who was told by the voices in her head that Tsubaki would be her first sexual partner. So they become a secret couple and, every day after school before parting ways to walk to their own houses, share a ritual: Urabe coats her index finger in saliva for Tsubaki to suck like some nurse-proffered thermometer. This has to substitute for a kiss (the more socially acceptable method of saliva transference) for now, because Urabe’s not yet comfortable with that level of physical intimacy. Will she ever be? Can Tsubaki be trusted? Is he mature enough to handle physical intimacy and the emotions that come with it? These are the questions the manga, unlike the anime, could definitively answer. 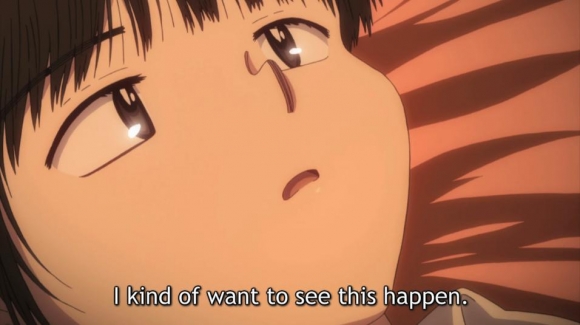 Unlike its anime adaptation, which knew how to stop, the Mysterious Girlfriend X manga keeps offering chapter after frustrating chapter of its trademark will-they-won’t-they. The anime covers roughly 36 chapters of the manga while leaving out and rearranging some chapters to tell a succinct, 13-episode story with an only slightly frustrating, but at least positively pointed, open-ended finale. The manga, on the other hand, has 11 volumes comprising 92 chapters that evolve the characters bit by bit but never the plot. This extension of repetition, instead of being leveraged to utilize author/illustrator Riichi Ueshiba’s imaginative device, dreamscapes, and intimate moments of moral consequence, usually and unfortunately ends up highlighting the borderline fetishistic side of this title. 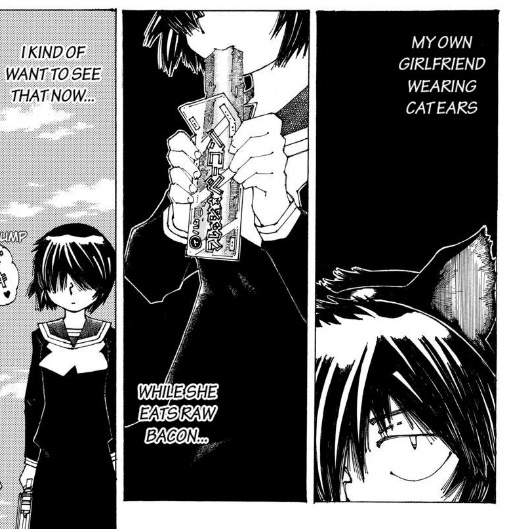 That's not to say there aren't chapters purely comprised of innocent fun or tender/touching chapters (hell, a few chapters made my eyes brim with tears), but the curiosities of an adolescent male are truthfully only so diverse when it comes to adolescent females. Therefor chapters dedicated to Tsubaki’s fixation on how Urabe would look in certain costumes — a bathing suit, bunny ears, a Guy Fawkes mask — play a large role in filling volumes. Thankfully, the costumes are more a means to expose Tsubaki’s shallowness and how it (however unintentionally) negatively affects the relationship between Urabe and himself. In short, moments of anger, jealousy, and objectification, as reflected by Urabe’s sincere hurt conveyed via the seemingly magical emotional transferrence of drool, cause the couple to learn more about themselves and each other and behave differently thereafter. That is to say they grow … together; nothing is ever portrayed as one-sided in this manga. Rather, that's as it would be in a perfect world. The repetition of such chapters, while at best a possible statement on the single-mindedness of the adolescent male psyche, reveals a frustrating lack of growth in storytelling and gets just about as tiresome as waiting for Tsubaki and Urabe to actually share a real kiss.

The repetition reveals a frustrating lack of growth in storytelling and gets just about as tiresome as waiting for Tsubaki and Urabe to actually share a real kiss. 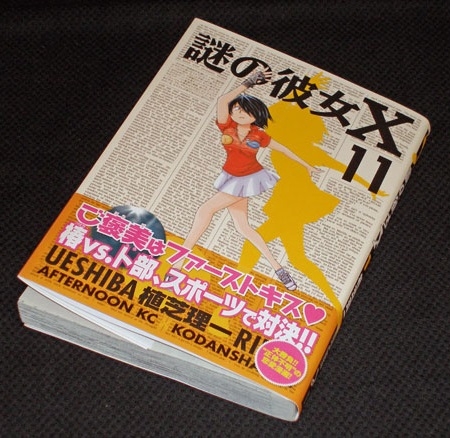 So it comes down to the very last chapter: Chapter 92. Tsubaki and Urabe have been together for what feels like forever and shared some real moments (good, bad, and downright ugly). They’ve sabotaged themselves. They’ve been sabotaged by others. They’ve held out so long against destiny, isn’t about time they just gave in? Someone once said of series built upon romantic tension that the first kiss ends all interest in subsequent content. Would a kiss between Tsubaki and Urabe have stopped readers from keeping up with Mysterious Girlfriend X? It’s a possibility. So maybe it’s a good thing it’s been 91 chapters without any solid climax. Maybe there was a reason for that. A lesson to be learned? After all, the story has a lot more going on that makes it a worthwhile read than the definitive answer to its own epitomic will-they-won’t-they.

It’s legitimately refreshing to see a story nostalgic about falling in love and those early assumptions and subsequently bumbled steps so often made early on in relationships. Rather, it’s wonderful to see two characters so intent on loving each other that they work through all the mishaps to be content with one another. I could watch/read that sort of compassion and caring endlessly (without the repetitive pandering to fetishes). Since this is a review about a manga that has run its course, however, and readers are most likely wondering what happened in the end to see if reading all those chapters is a worthwhile feat, let me … take at least a paragraph to contrast some other aspects of the anime and manga along their respective runs.

The anime completely outclasses the manga in terms of visuals. 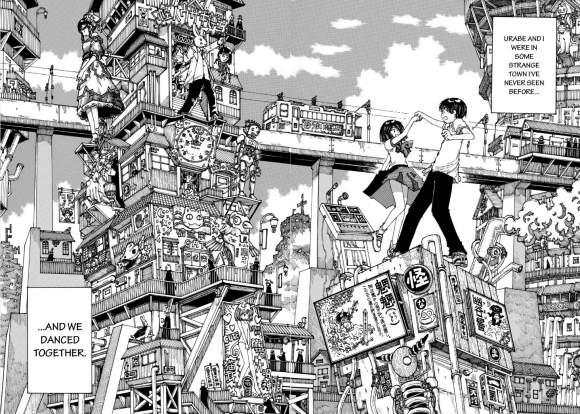 For its 13 episodes, the anime completely outclasses the manga in terms of visuals. Backgrounds and dreamscapes are not only used more often but with greater impact on the story regarding foreshadowing and mood/tone. I still remember more of the anime’s presence than that of the manga despite the latter's length and unfortunate repetition. The manga had not finished when the anime was airing, so a true-to-the-book ending was not in the cards. How the anime ended its run, by swapping content and choosing specific chapters to relay the building relationship between Tsubaki and Urabe as well as foreshadowing its conclusion, became evident as mastery upon reading the manga. The composition of the manga’s chapters seems (by comparison) corrupted by a bad sense of both pacing and character evolution; chapters seem spurred on by random ideas instead of an architected flow. (Character design, however, is pretty consistent between the two mediums.) Thankfully, some of what the anime omitted for time’s sake, and much of what’s in the volumes that followed the anime’s air dates, is worthwhile reading material.

As it would be a shame to ruin the ridiculous amount of frustration built by the manga at this point, I’ll not spoil the end for you, dear reader. I’ll merely recommend its perusal to those not so off-put by its premise and explain how I think the manga should've ended:

Second to last panel: Silhouettes of Tsubaki and Urabe, who have been established as completely intent on kissing and allowed by all circumstance to do so, lean in with only a barely distinguishable sliver of white page separating their lips.

Last panel: A close up on the faces of Tsubaki and Urabe as they both turn, fully lit, towards the camera and say in unison, "Thanks for reading!"

I would accept this for two reasons. Firstly, because it would make so many people scream, but mostly because the kiss isn't the reason behind Mysterious Girlfriend X … waiting for it is. If Tsubaki and Urabe were to "move forward" by kissing, that would only advance their physical interaction and not necessarily (depending on pressures involved) signify any growth. Mysterious Girlfriend X is, instead, all about the waiting, the meantime: how the characters get to the kiss — how important and special it is to be fortunate enough to partake of that type of intimacy, which can only be built between people who have invested much time in getting to know each other via many tribulations. The story is simply Tsubaki and Urabe getting close to and learning about each other. And underlying the odd, the gross, and the unexplained in this series is some serious character development via every incident made possible at the reader's frustrated expense. The kiss is superfluous — bait masterfully poised to lure readers through page after page of falling in love.