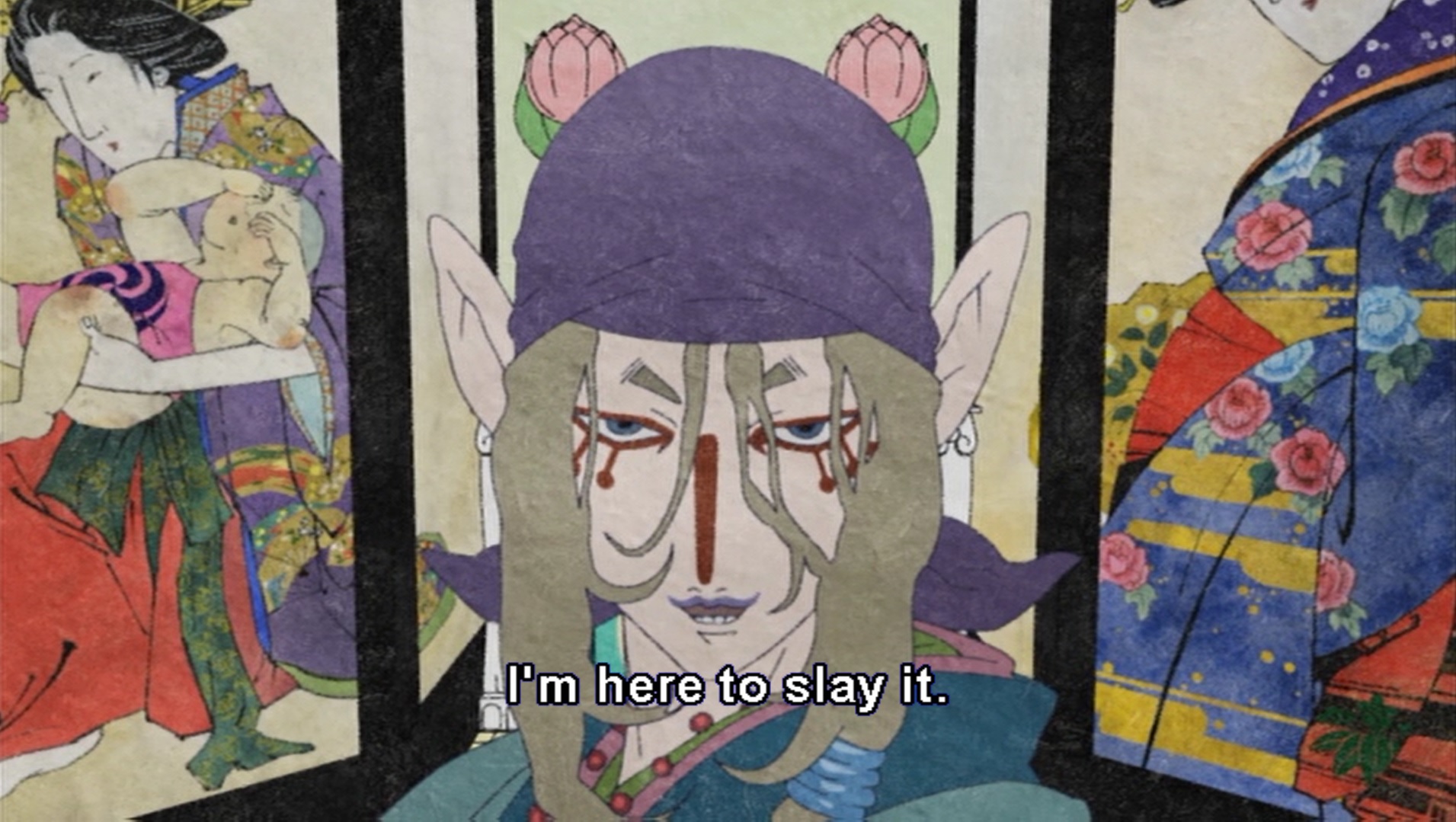 Welcome to Anime Secret Santa, a gift exchange — founded by our friends at Reverse Thieves and currently run by the AGC Podcast — where the gifts are anime review recommendations. This post is our third and final Secret Santa review for this year!

As usual, because I am horrible about updating my watchlists with titles I see in theaters or on Netflix, I owe my Anime Secret Santa an apology; I already saw Yasuke (wasn’t fond of it) and Lupin III: The First (LOVED it), which left me with the final recommendation of AnoHana: The Flower We Saw that Day. To my Santa’s credit, all three titles were definitely up my alley. But since I didn’t want tears for Christmas, I asked for back-up recommendations, which also turned out to be on-point and very Ink-core: Thermae Romae and Mononoke. Kudos, Santa, ku-dos.

I’d been meaning to get to Mononoke (note: no relation to the Ghibli movie Princess Mononoke). It’s a title that comes up frequently on lists of anime to watch in October (a.k.a. scary movie month), it’s centered around spirits/folklore, it originally aired on the noitaminA television programming block, and its OP is a glorious mess of discordant music, haunting images, and diverse art styles. Getting me to watch this series really should have been like shooting me with Cupid’s golden arrow while I waded blissfully unaware in a barrel. (Note: I take up a lot of a barrel.) And you know what? It was. 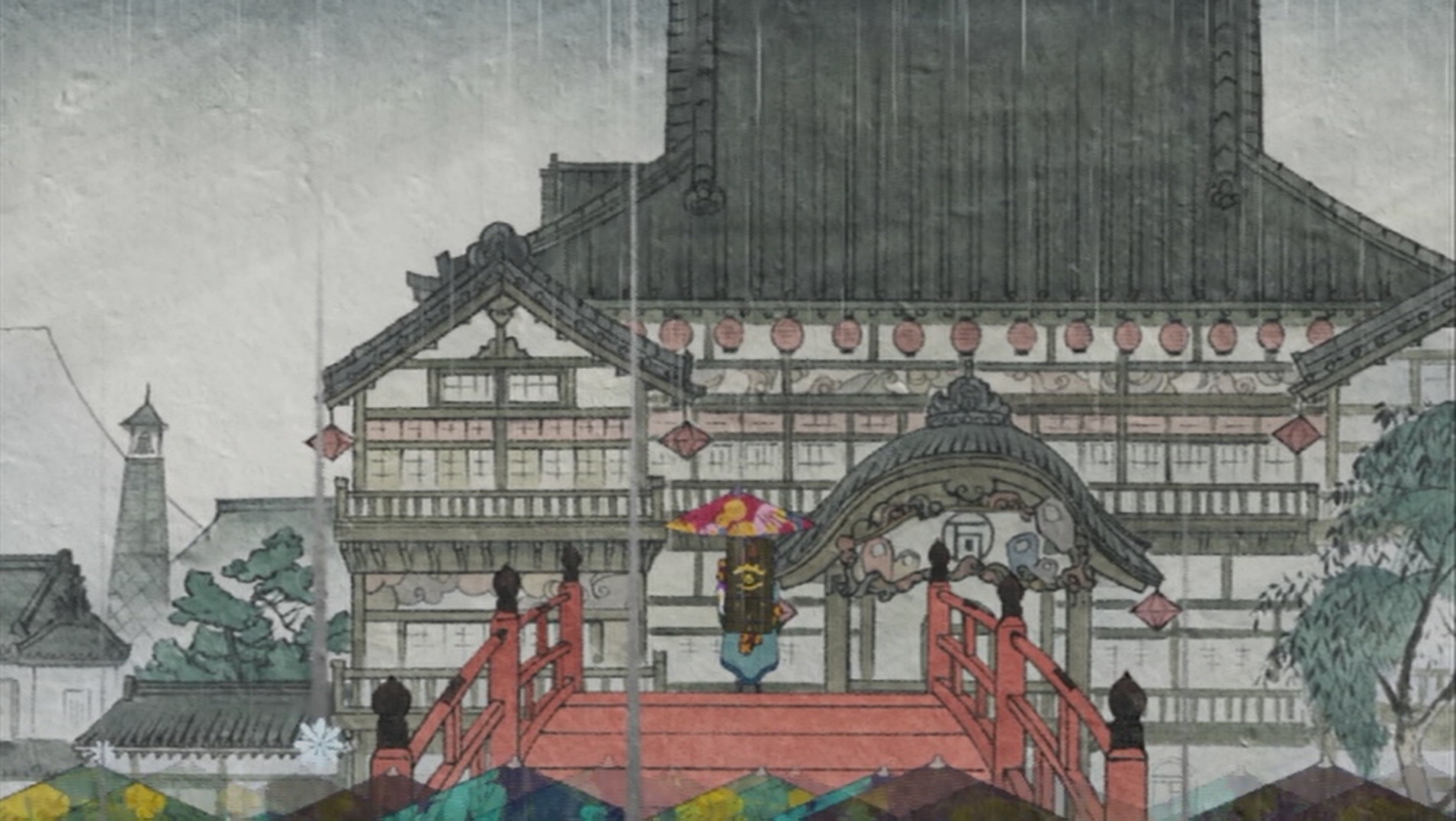 The art and animation drive the storytelling with masterful efficacy.

I knew it was love at first sight when I started compulsively writing of one page of notes on visual storytelling in preparation for this review after watching just the first 20 seconds of the first episode. While the plot of Mononoke’s tales (five in all comprising the complete 12-episode run) boil down to a detective-driven, ghost-centric Mushi-shi solved by a sword-wielding, mahou seinen exorcist, it is the art and animation that drive the storytelling with masterful efficacy.

The art style is immediately endearing for its paper-like flatness (in addition to a paper grain camera filter), but what’s more important is how that’s used and why. A seemingly slower-motion, stuttering frame progression in select scenes creates ghost images — visual echoes that induce a dream-like state. And when such an atmosphere is as skillfully established as it is here (a must for tales of horror), the resulting immersion allows the story to justifiably proffer just about anything it wants in the realm of its own logic. Once the show has its hook in, all it has to do is pull. And Mononoke never lets go. 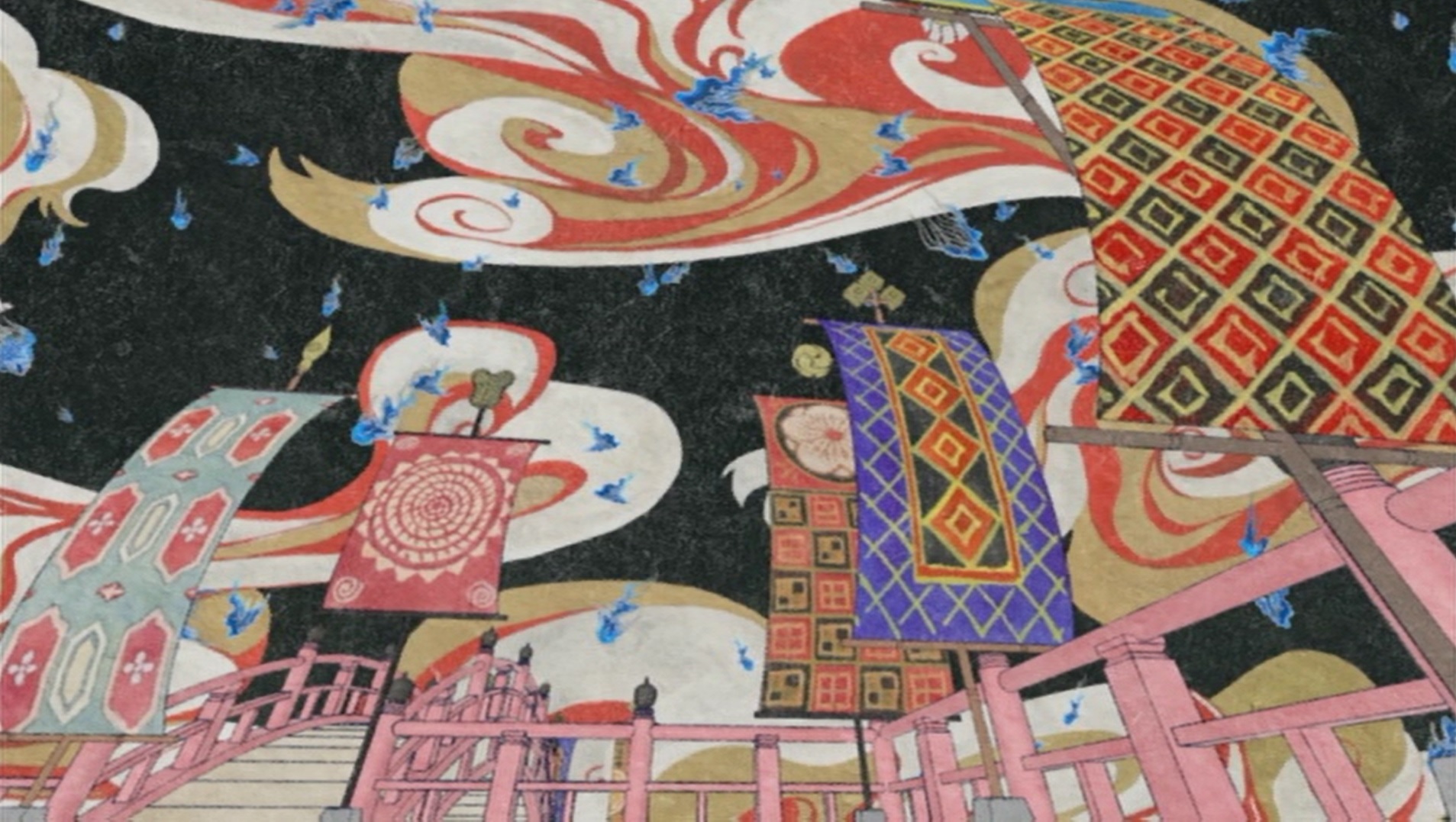 Framing goes a long way in telling more of the story than the dialog and often turns the setting into just as much of a character as the players.

Complex cuts that rely on perspective changes with motion and color are dizzying in the most wonderful ways. Off-screen sound effects combined with alternating static shots that reveal one character becoming increasingly closer to another create an unnerving effect by suggesting quick and aggressive movement. Framing also goes a long way in telling more of the story than the dialog and often turns the setting into just as much of a character as the players (if not more so). And as much as the art and animation can be absolutely enthralling, they also know how to evoke wonder and awe. Abstract art used on extras’ silhouetted faces. Colors warming up washed out/grayscale designs in a blanched winter setting as incense fills nostrils with vision/reminiscence. Snowflakes moving in geometric patterns like tailed comets. Amniotic fluid dripping onto the center of a pillow that looks like a fully opened flower blossom. OK, that last one’s really just amazing if you’re fascinated by the origins of some of the featured yokai, but still!

I’ve waited until now to spell out Mononoke’s premise, because, honestly, that’s the least interesting aspect. Don’t get me wrong, the ayakashi or mononoke (the antagonistic spirits) and the stories surrounding them are delicious and engaging, but unlike the aforementioned Mushi-shi, the weight of the atmosphere in Mononoke exists less as a drama used to generate sympathy for its characters than it does as a “simple” vehicle for the delivery of a good scare or shock. So I can tell you that an unnamed medicine seller shows up in random places, detects a spirit that has bound to the negative emotions of some being or thing, and then has to figure out that spirit’s form, truth, and reason before transforming into a film negative of himself to slay the spirit using a bazillion eye talismans and a monkey sword with chattering teeth. Or I could just continue describing the aspects that make this show 1,000% worth your time. 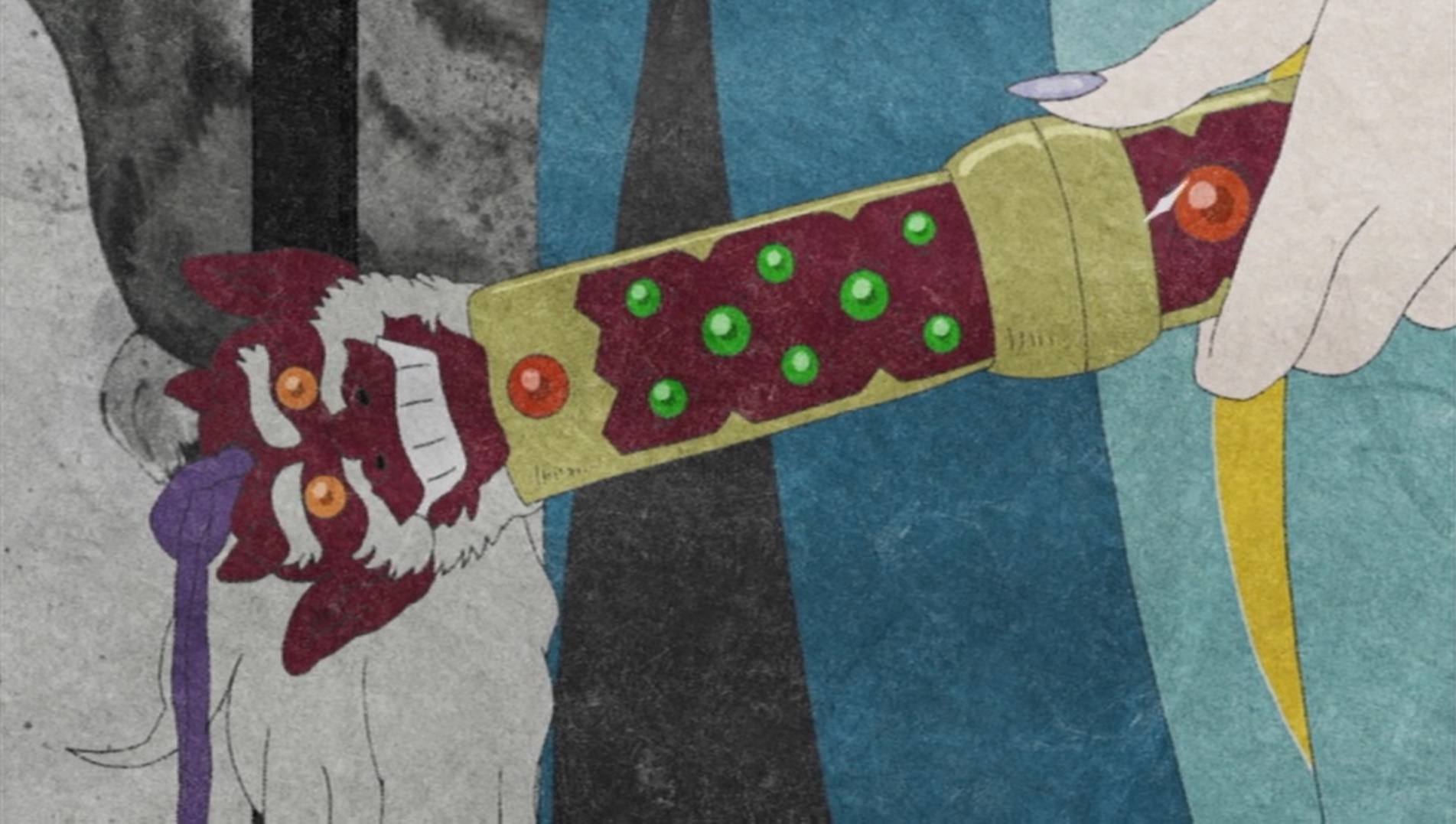 If you are as big a fan as I am of composer Yasuharu Takanashi’s work on Hell Girl, you’ll recognize the same types of solemn, floating phrases he produced there.

With Mononoke, it’s not what the mononoke are (necessarily) that will be of interest, but how they are presented. And even though the series only consists of five stories, there’s a lot to enjoy about the introduction to the featured mononoke by observing the humans around it and appreciating the different angles from which the stories are told. I found myself researching zashiki warashi (ghosts of slaughtered infants) and marveled at how the associated imagery was woven into the scenery. I loved that Sea Bishop (the second tale) starts off with an almost anecdotal telling of the umibozu and proceeds into a Bermuda Triangle teeming with water-themed yokai. The introspective nature of the story of The Faceless Monster and the almost play-within-a-play, reality-questioning nature of the episode is by far the most interesting and touching.

Underscoring all of this (literally) is music by Yasuharu Takanashi. If you are as big a fan as I am of his work on Hell Girl, you’ll recognize the same types of solemn, floating phrases he produced there — the kind that creep into your ears without you noticing them until you feel a shiver up your spine or tear along your cheek. Takanashi is a wonderful choice for score, as his talents only add to the brilliant atmosphere of this wonderful show.

Have I gushed enough? I couldn’t possibly, but I must end. So if you are reading this to see if you should watch, I hope you have decided either way. I’m going to go watch it again, because as I just learned by checking out Episode 1 again to remember the flavor, re-watches expose the layered details that only those who have seen it previously will catch. It’s that good. 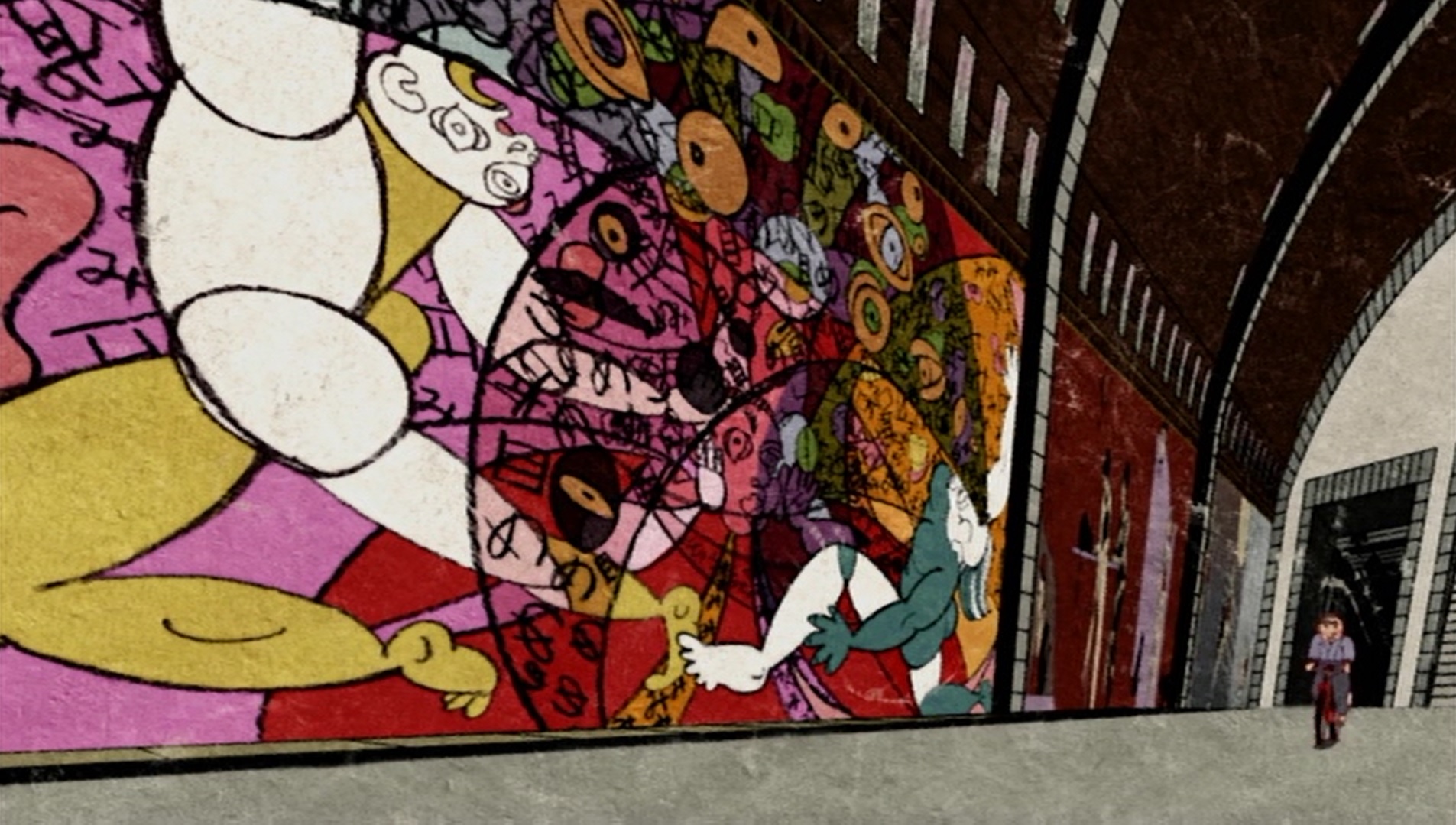