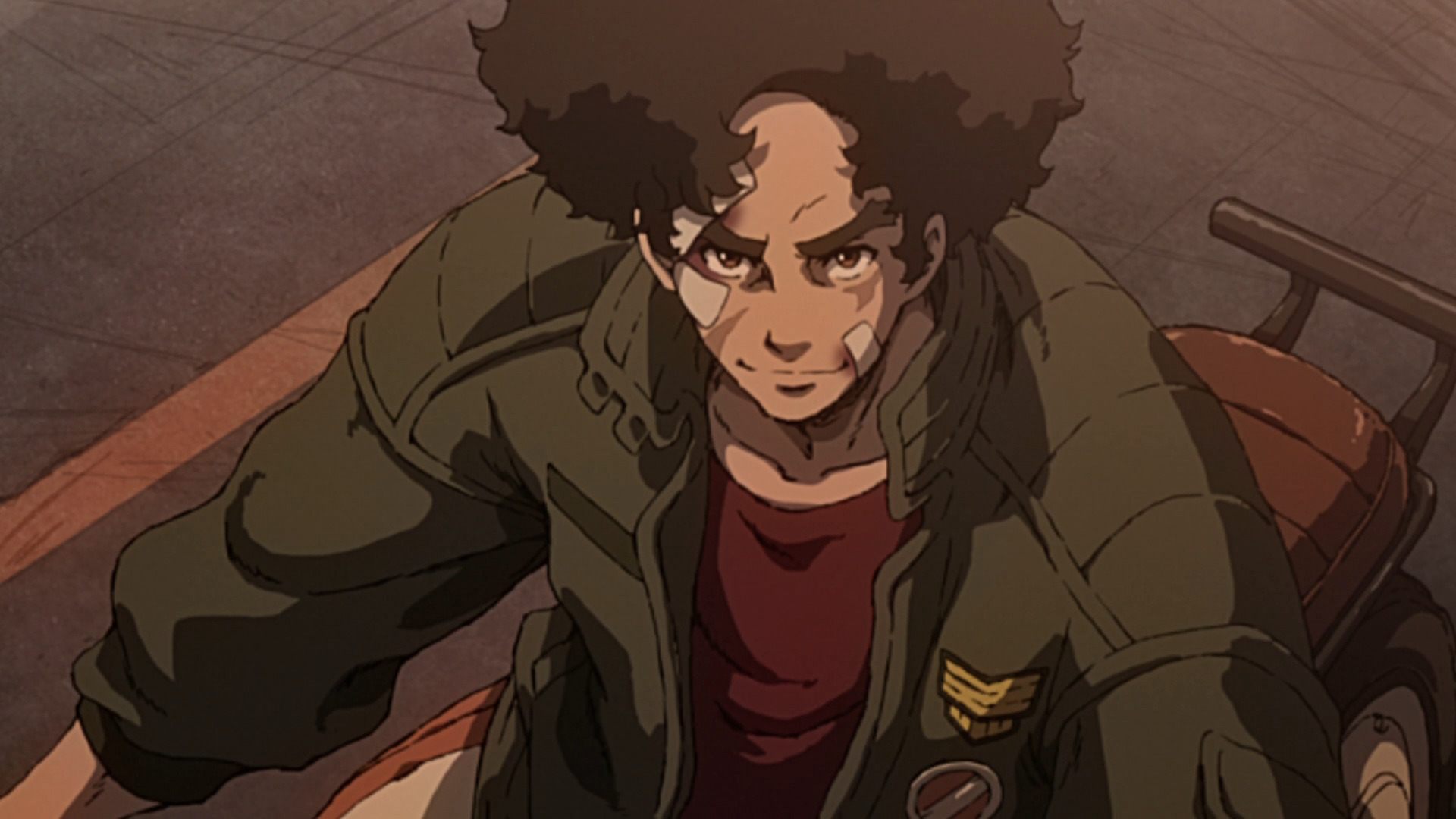 As listeners of the Ani-Gamers Podcast know well, I have a bad habit — we’ve dubbed it “Pulling an Evan Minto” — wherein I refuse to watch some things until I’ve seen prior versions of them. I don’t like coming into a story without context and missing cues that fans of the original understand, whether it’s a sequel, an adaptation, or even a new work from an established auteur. One of the many anime series this prevented me from watching was Megalobox. Despite heaps of praise from folks who I respect, I hadn’t read or seen Ikki Kajiwara and Tetsuya Chiba’s Tomorrow’s Joe, on which Megalobox is based, so no go. The recommendation from my Anime Secret Santa, along with some encouragement from one of my Otaku USA editors, Joseph Luster, convinced me to take the plunge this time. I came into Megalobox almost entirely fresh, with only cursory knowledge of Tomorrow’s Joe. Who says you can’t teach an old dog new tricks?

If you know one thing about Megalobox, it’s probably that it’s the mecha boxing show. That’s technically accurate, though the science fiction element is far less pronounced than you’re probably expecting. The titular sport is basically just regular boxing, except that all of the boxers (or most of them — more on that later) fight with mechanically augmented arms. The main character is a scrappy underground fighter who has no real name and initially goes by his ring name: Junk Dog. He’s got talent, but it’s being squandered by his coach, a washed-up, one-eyed old man named Nanbu who makes his money by having Junk Dog throw matches on behalf of the mafia. A chance meeting with Yuri, the champion of Megaloboxing, sparks a rivalry between the two and inspires Junk Dog to break out of the world of rigged underground fights and into Megalonia — the worldwide Megalobox championship.

Joe’s choice to fight “gearless” is an interesting idea that gets introduced a bit too late and ultimately has very little impact on the matches themselves.

The original Tomorrow’s Joe is a classic boxing underdog story about an orphan working his way to the top of the rankings in his sport. Megalobox follows the same tradition, but as far as I can tell this is an extremely different version of the story. Junk Dog is the obvious stand-in for Joe (he even takes on the name “Joe” once he gets his hands on a forged ID) and Nanbu is based on Danpei Tange, Joe’s coach in the original, but many of the other characters, including Yuri, appear to be only loosely based on Kajiwara and Chiba’s versions.

Joe/Junk Dog is the boxer at the core of the story but ironically gets some of the least character development of any major character. It’s possible this is because the old Joe is so well known to Japanese audiences that they can project some of him onto this version, though it’s not very helpful for overseas fans like me! It’s common these days to give sports anime heroes a gimmick, some special ability or weakness that sets them apart from other athletes. In this case it’s Joe’s choice to fight “gearless” — without any of the mechanical arm gear customary for Megaloboxers. It’s an interesting idea that gets introduced a bit too late (four episodes in!) and ultimately has very little impact on the matches themselves. The fights are staged almost exactly like real boxing matches, and the different characteristics of the fighters’ gear rarely factors into the decisions Joe makes in the ring. 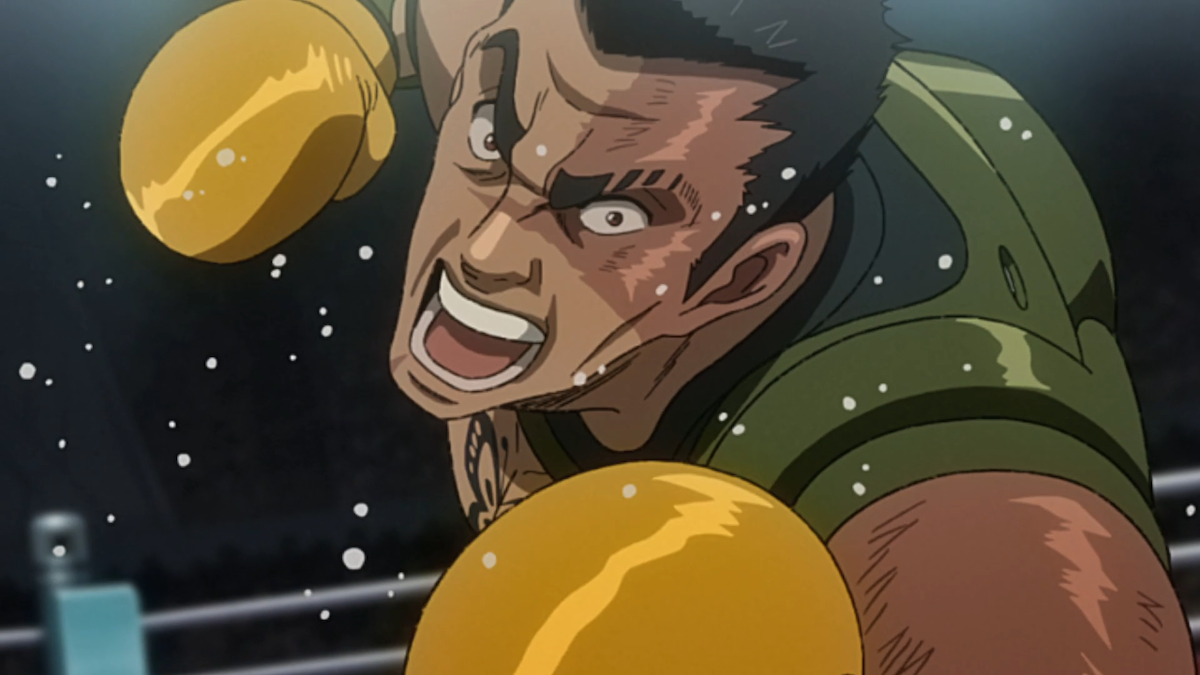 Nanbu is a man trying to defy the gravity of his own failures, to create something good out of all of the bad in his life.

Thankfully, Megalobox more than makes up for the lack of development and backstory for Joe with a small cast of well-developed side characters and rivals. Nanbu’s arc in particular is a highlight. He’s a man trying to defy the gravity of his own failures, to create something good out of all of the bad in his life. Often we watch him take a step forward only to fall two steps behind, but the responsibility he feels toward Joe keeps him going. As with many of the best stories about teachers and pupils, Joe’s struggle isn’t just about Nanbu saving him. It’s also about Joe saving Nanbu. 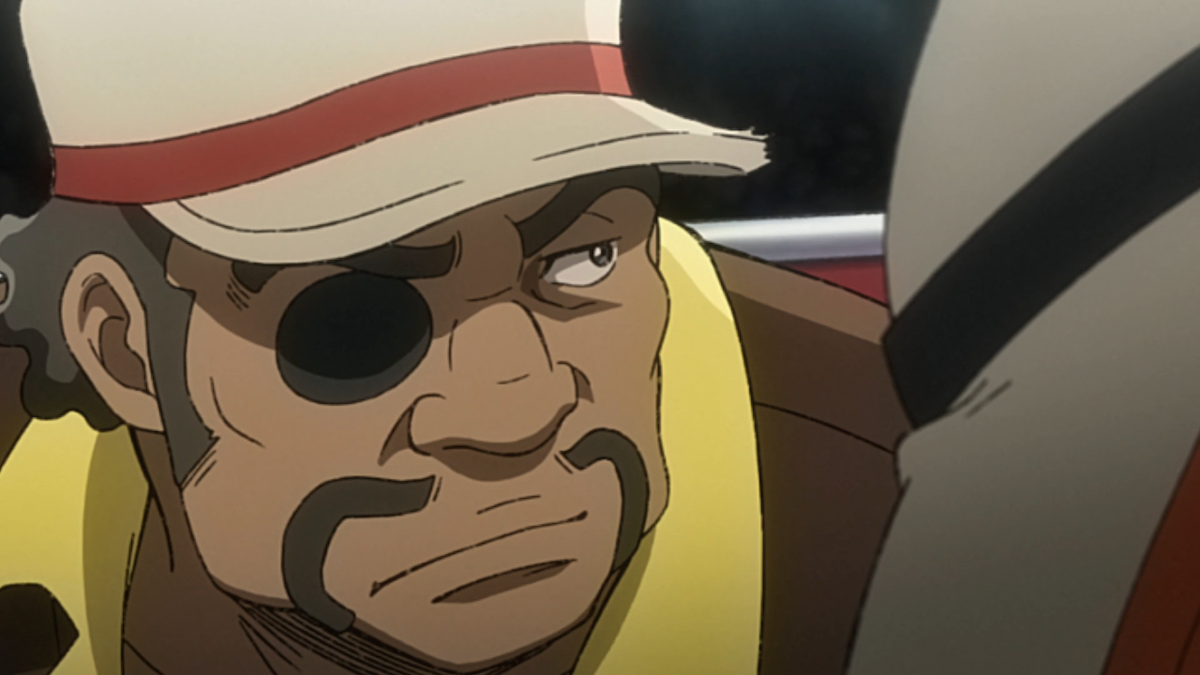 The art suggests not just a vague sense of “retro” anime, but a specific window of time at the advent of the expressionistic anime style of the 1970s.

This is seemingly the directorial debut for You Moriyama, who previously worked largely as an animator, animation supervisor, and designer. The 13 episodes of Megalobox are tightly paced and laser-focused on the Megalonia tournament and building out the stories of Joe’s opponents, with very little time spent diving into narrative detours. Some of the credit for this likely belongs to Katsuhiro Manabe and Kensaku Kojima, who wrote all of the scripts themselves without doling out work to individual episode writers. But Moriyama’s directing also complements this focus well, taking just enough time to linger on key shots and mixing up the timing and energy of each fight to keep things exciting and unpredictable. Compare this to Yuri!!! on Ice, a series that sometimes struggles to make each of its many figure skating competitions feel like a unique, memorable event. The soundtrack is also a key part of this, with killer rock tracks and hip-hop beats from mabanua (a producer who only rarely works on anime) pumping up the energy leading into the show’s fights and cliffhanger episode endings. That said, there’s at least one completely unnecessary diegetic rap sequence that comes off more goofy than anything, so they can’t all be winners. 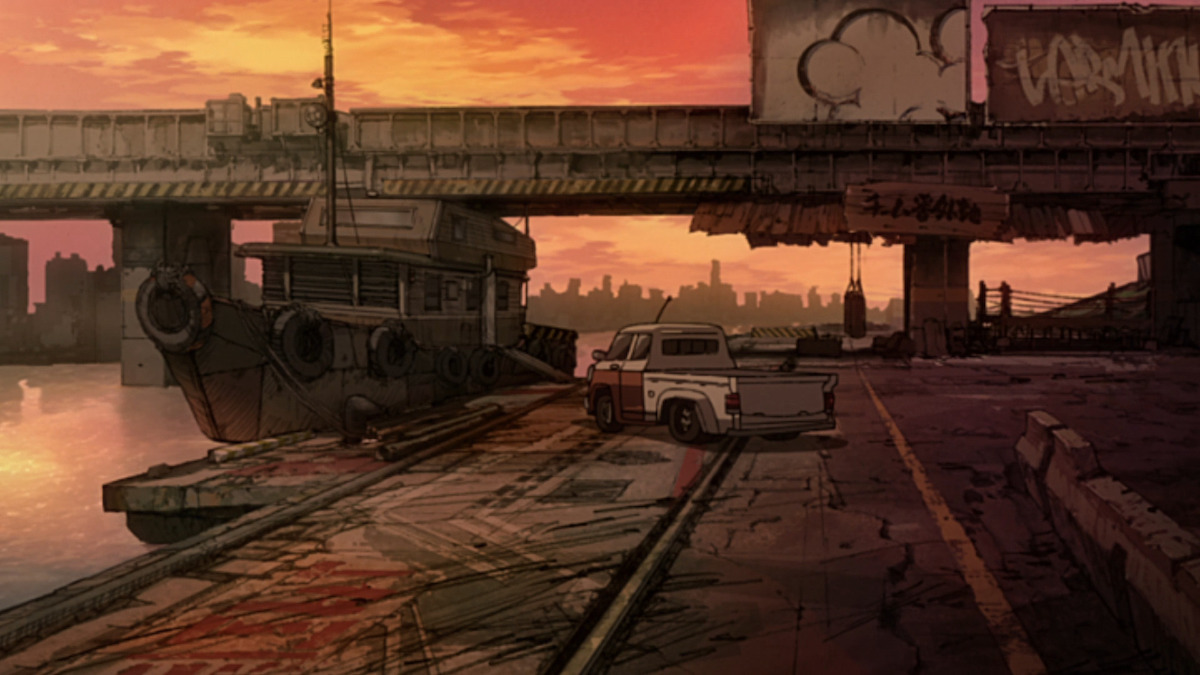 Then there’s the art. One of the things I was most excited about when I first came across Megalobox was the way it pays tribute to the art style of the original Tomorrow’s Joe. The backgrounds are rendered in scratchy line work, the colors are far more muted than most modern digipaint shows, and the characters are drawn with chunky, textured lines with high contrast in the stroke widths. All of this suggests not just a vague sense of “retro” anime, but a specific window of time at the advent of the expressionistic anime style of the 1970s. Hiroshi Shimizu’s character designs, which have always had a touch of retro to them, bring some of that rough quality as well. On top of that, Shimizu and Moriyama take pains to recreate the iconic visual language of the original Tomorrow’s Joe. It’s not enough to be distracting, but for a shot or two every episode you’ll catch a glimpse of the dark, penetrating stare of an Akio Sugino character or the bold, cinematic staging of an Osamu Dezaki shot.

I really enjoyed watching Megalobox. Despite a few minor stumbles here and there, it’s a tense, grounded sports saga told with economical precision and a lot of heart. Thankfully it’s getting a second season next year, which will hopefully provide some more time to delve into Joe’s backstory and motivations! Though if I’m getting antsy for more, there's always yesteryear’s Joe. 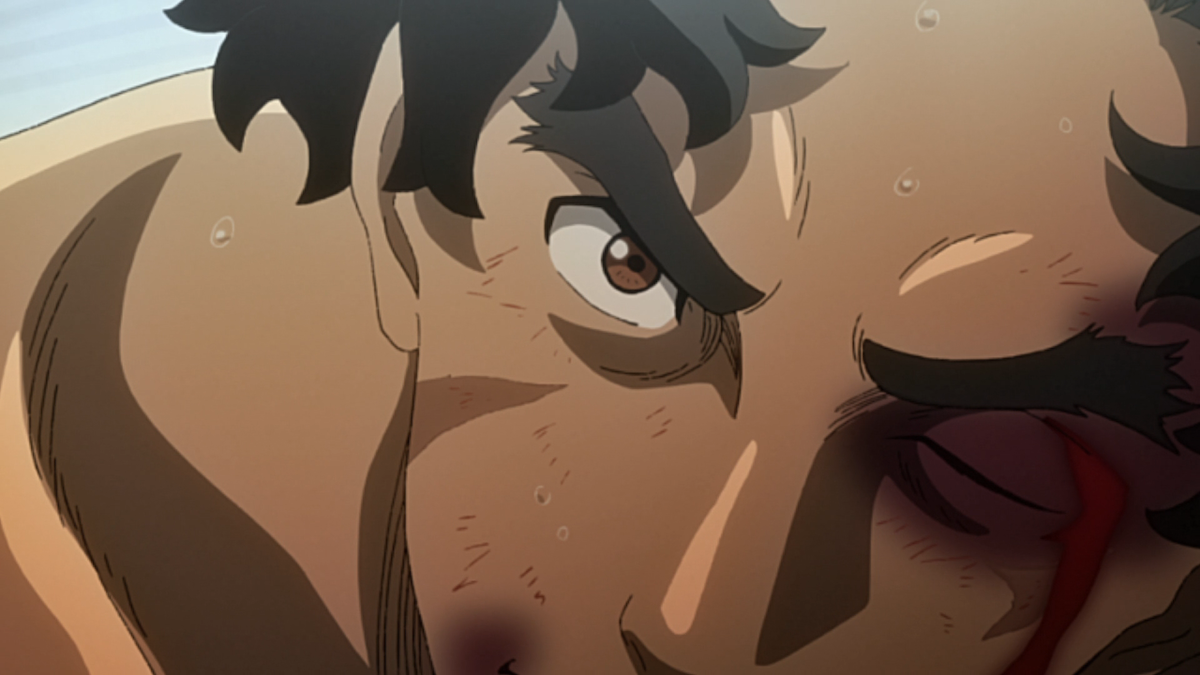