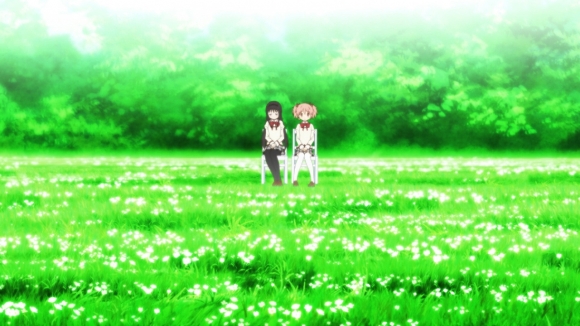 A joke is only as good as the first time it's told. Anything that comes after is just a result of desperation.

When we talk about Madoka, there’s no choice but to run the same gauntlet of memes and pairings, entirely because we’ve run out of worthwhile things to talk about at this point. Long before the recap movies arrived in theaters, the story had been disassembled, picked apart, studied, and written about by seemingly anyone with half a developed opinion. In retrospect, the frenzy that followed the end of the original series went exactly as skeptics said it would; it died out and everyone moved on to the next thing, but not before leaving behind an embarrassing amount of declarations of “masterpiece” across the internet. Regardless of whether Madoka is a modern classic or the worst thing to happen to the medium, it at least did what few anime series are willing to do and brought things to a definitive conclusion without room for a continuation.

Rebellion is a shameless monument to self-evisceration, an all-or-nothing gamble to get the audience to launch into hyperbole upon leaving the theater, once more, for old times' sake.

Puella Magi Madoka Magica the Movie Part III: Rebellion is the most important accomplishment in unnecessary sequels in the 21st century. It is a shameless monument to self-evisceration, an all-or-nothing gamble to get the audience to launch into hyperbole upon leaving the theater, once more, for old times' sake. Rebellion starts immediately following the final scene of the original TV series with a sequence that explores the possibility of what it would be like if Madoka Magica were a typical Magical Girl series. From there, it devolves into a wacky non-Euclidean adventure through the psyche of Akemi Homura who assumes the role of the protagonist of this story. Madoka’s trademark visual style is in full maturity here, rocketing out of the creative slum of corrupted fairy tale clichés by virtue of its execution on overworked ideas. To round out the package, the film is set to a Kajiura Yuki soundtrack that sticks to the formula but surpasses her earlier Madoka work. The usual Shaft off-model character animation corner-cutting still shows up here, even in a theatrical release of its most popular property, but it's hardly a dealbreaker compared to what else Rebellion has to spring on viewers.

Rebellion flips its greatest weakness, the expectations of an audience chomping at the bit for the “twist”, for another Episode 3 moment we've set ourselves up for, and turns it into its greatest strength. The moment is there, it comes in like a senseless trick that undermines everything the series had built up towards, and that’s exactly the point. The note on which the film ends is actually worth the contention it has brought upon itself, introducing an entire new dimension to the themes of the story and revealing a duality that only becomes irritiatingly obvious after seeing it in effect. Rebellion ends exactly how I wish it wouldn’t have, yet I understand why and it’s so much more meaningful than the original series ending. 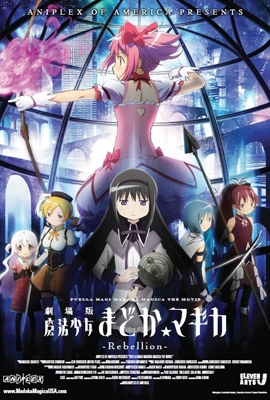 It’s not that Rebellion is a challenging film. Rather, it’s a brutishly simple concept enveloped in layers of distracting frills and self-servicing allusions to minor details from the previous story. It hits the highest priority marks that would otherwise sink the film, but there are a number of fumbles that reason insists is enough to lower the film a couple of grades. Rebellion mostly removes the silly pseudo-science talk that was the basis of the original rules of the series and when it does launch into a spiel on quantum mechanics, it plays it for laughs, knowing what all of it will amount to in the end. However, this is only apparent through a second viewing. Rebellion is far from a standalone product and proceeds with the presumption that you know your Madoka and are prepared to scrutinize this film in an eventual repeat viewing. Some of the conversations in the second act of the film leap too far over the established logic of the series and most of the revelations are delivered stiffly, as if the film were trying to hurry things along towards the finale. It’s a shame that Rebellion opts to smash through the walls of its own labyrinth for the sake of runtime, as shaving off a few minutes from the beginning to dedicate toward a more natural flow of plot development in the middle would have resulted in an ideal final cut.

It's a selfish and mean-spirited film, and I can’t help but love it for having the audacity to go in this direction.

Rebellion is a selfish and mean-spirited film, and I can’t help but to love it for having the audacity to go in this direction. Reason be damned, Rebellion is far more essential than any other anime released this year. In a universe where every single word dedicated to discussion of Madoka is not worth the heat energy expended, Rebellion rewrites the very laws of our being and frees us from the shame of talking about Madoka by making fools of us all.

This review is based on a screening at Big Cinemas Manhattan on December 6th, 2013