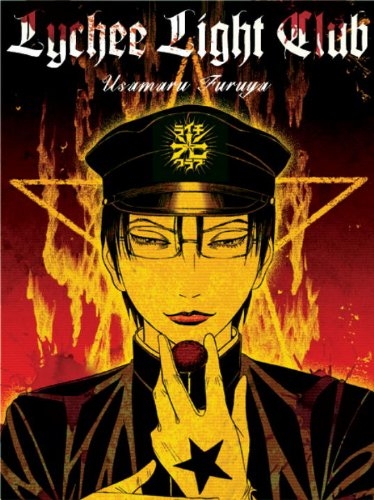 In an over-industrialized Japanese town, 8 schoolboys have found a valuable way to waste away their boyhood years: a "Light Club" in an abandoned factory, where they meet up to hang out after school every day.

But things are not what they seem to be. The club has a miltaristic structure, complete with neo-Nazi themes and German nicknames, and the boys maim and murder anyone who dares discover their secret hideout. That, and they're building a robot — powered by lychee fruit — with the express goal of using it to "capture a beautiful girl."

Lychee Light Club is a one-shot graphic novel from cult favorite Usamaru Furuya, based on the Tokyo Grand Guignol theatre troupe's tragic 1985 play of the same name. It follows the rapid degeneration of this tightly controlled boyhood hierarchy, perpetuated by the successful activation of their robot, "Lychee," and his successful capture of a beautiful girl named Kanon. Amidst growing paranoia in the club, Kanon forms a strange connection with her robot captor, who has been programmed to believe that he, too, is human.

Lychee's greatest strength is its brevity; the one-shot format allows Furuya to tell a complete story with a surprisingly satisfying arc, all while driving home some biting social commentary. My first impression was that Furuya is commenting on Japanese sexual seclusion, most clearly evidenced by the boys' idolatrous view of girls. One says "I kinda can't believe it: a girl, right in front of me," and the dictatorial leader of the group, Zera, declares that "you must never look at her as an object of lust!" Intentional or not, it calls to mind otaku culture's "sexualization of innocence," as evidenced by moé anime and teenage idol culture.

Grand Guignol-style theatre is known for its gruesome violence, and this manga adaptation pulls no punches. A female history teacher who chances upon the Light Club is stripped and then evicerated for her crime, and a fellow student who makes the same mistake has his eyes burned out after a morbidly funny scene in which the boys brainstorm ways to punish their unfortunate captive.

These moments of quirky, black comedy are rare, but they are deftly incorporated into the story, such as a sequence in which Lychee brings back a series of inanimate objects and ugly people in a failed attempt to pinpoint what "beautiful girl" means. There's a fascinating (and horrifying) cognitive dissonance in laughing during a scene involving human beings who have been needlessly kidnapped to fulfill the sexual urges of a cabal of disturbed teenagers.

The two rays of light in this story are Kanon and Lychee himself, who, in working as a tool for the Light Club members' dark desires, becomes more human than they could ever be. By the end of the story, the friendship (and perhaps romance?) between Kanon and Lychee becomes a strong driving force, and manages to leave the reader with a satisfying conclusion despite the horrific events throughout the book.

Furuya's art is a perfect match for the subject, mixing super-high contrast shadows and highlights with intentionally ugly, androgynous character designs. He seems to delight in drawing hair and cloth in particular, usually depicting them as all-black with white highlights.

There's a lot going on in Furuya's macabre epic, from subdued commentary on industrialization (told through background art but never explicitly mentioned) to homoerotic experimentation (the boys fulfill each others sexual desires in absence of a female presence). If you can accept that all of Furuya's absurd violence, including people being flattened from the head-down, burned alive, snapped in half, and raped, is there for the sake of commentary and (in some cases) catharsis, not titillation, you will find Lychee Light Club to be a wholly satisfying, even ... fruitful experience.

This review is based on a retail copy that the reviewer borrowed from a friend.