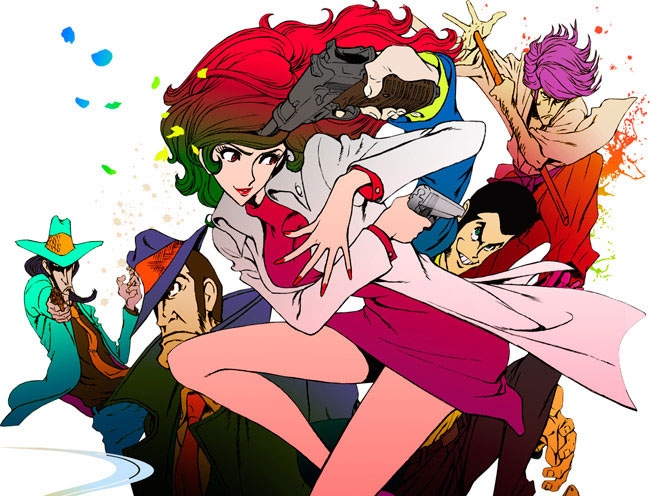 Lupin III is a monster of a franchise, an iconic series that manages to be recognizable even to those who have never read or seen it. It all began with Monkey Punch's raunchy '70s manga, a slapstick film-noir adventure led by the unruly thief Arsène Lupin III — grandson of Maurice Leblanc's famous French thief Arsène Lupin. Joining Lupin on his high-flying heists is a motley crew of allies, including the aloof gunman Jigen and austere samurai Goemon. The well-meaning Interpol detective Zenigata tries to catch our hero at every turn, but naturally he's no match for Lupin's thievery.

Then there's Fujiko Mine. Stunningly beautiful and brutally cunning, she is a quintessential femme fatale. Like Lupin, Fujiko is a thief, but unlike Jigen, Goemon, and Zenigata, who follow in Lupin's shadow as either allies or enemies, she is every bit his equal. Indeed, though Lupin is madly in love with her, Fujiko is the one thing that said master thief cannot steal. Thus, she occupies a strange space as both a clear object of gendered objectification and a worthy rival of our protagonist. 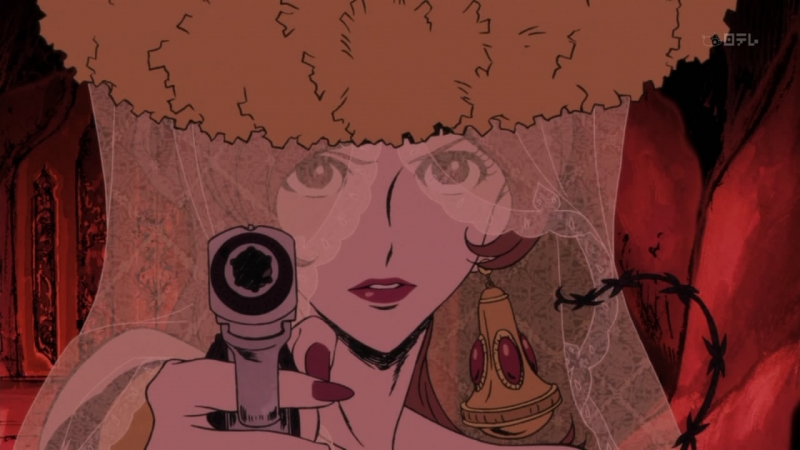 Since its original publication, the Lupin manga has seen dozens of film and television adaptations in both live-action and animated forms. But over time, the inexorable march of Lupin films has made the series feel kind of unapproachable for newcomers. In an attempt to reimagine the story of Lupin III for new audiences (or at least old audiences in a new way) while celebrating 40 years of Lupin anime, Tokyo Movie Shinsha came across something so simple that it seems rather obvious now: just don't make it about Lupin! They tapped Takeshi Koike, acclaimed newcomer director fresh off his seven-year labor-of-love, Redline, to lend his unique visual sense to the character designs, and brought on director Sayo Yamamoto, creator of Manglobe's sexy action series Michiko & Hatchin. But if the protagonist wouldn't be Lupin, who could it be? It would need to be someone just as charismatic, just as clever, and just as fun to watch. It would need to be the lady looter herself: Fujiko Mine.

For the first couple of episodes, Lupin III: The Woman Called Fujiko Mine remained unlicensed in North America, but at Anime Boston 2012, FUNimation announced that they would simulcast the series. All of the episodes are now available on FUNimation.com and Hulu.

If nothing else, Yamamoto, Koike, and company make sure that the 13-episode series, Lupin III: The Woman Called Fujiko Mine, is fun. From its explosive first episode to its twisty finale, Fujiko is filled with laughs and "oh snap!" moments on par with the Lupin films and manga, though it's not quite as much of an adrenaline rush as Koike's Redline. However, one place where Fujiko far outpaces Redline is in its willingness to push the "nipples in anime" envelope. Whereas Redline had one instance of topless female nudity (which many fans, including this reviewer, were pretty surprised about), this new vision of Lupin has dozens of them in the opening credits. Let's just say Fujiko isn't a shy woman, and the folks at TMS aren't too shy about showing the sexy side of Monkey Punch's series — a side that Hayao Miyazaki so deftly avoided in his seminal Castle of Cagliostro film. 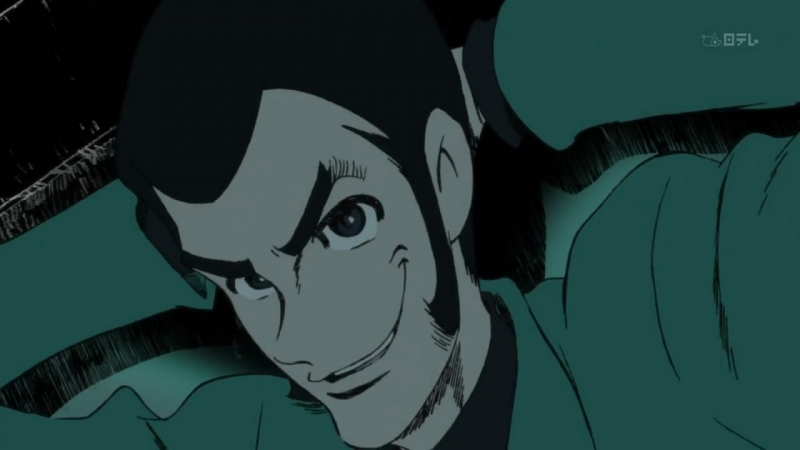 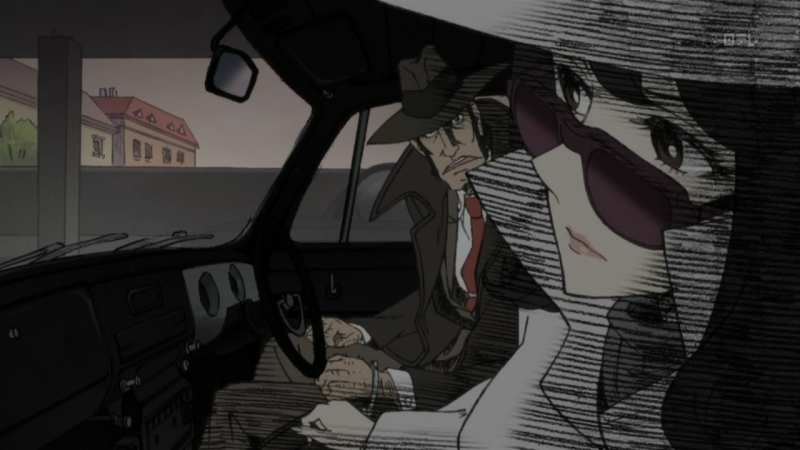 Despite this tonal adherence to the original comic, the different focus in Fujiko really does bring a freshness to the series. Not only is Fujiko now the main character (Lupin doesn't even appear in some episodes), but the entire plot takes place before the formation of Lupin's little gang of thieves. It's an atypical prequel in that it doesn't lay out the specific events leading up to the original story. Instead, Fujiko spins a thin web between the characters in order to lay the groundwork for Lupin's future collaborations with Jigen and Goemon and clashes with Zenigata. It also helps that the series expands upon the existing Lupin framework, to the point of even adding new recurring character (Oscar, an Interpol officer with an obsessive gay crush on Zenigata).

Takeshi Koike's visual style is like nothing I've ever seen, and this alone is enough of a reason to check out Fujiko.

Furthermore, Koike's visual style is like nothing I've ever seen, and this alone is enough of a reason to check out Fujiko. Shading is shown with pencil-y parallel lines, characters are drawn with high-contrast blacks, and the entire world has a worn-out yet colorful look, a sort of textured retro aesthetic that takes as much from Redline as it does from the original Lupin manga. 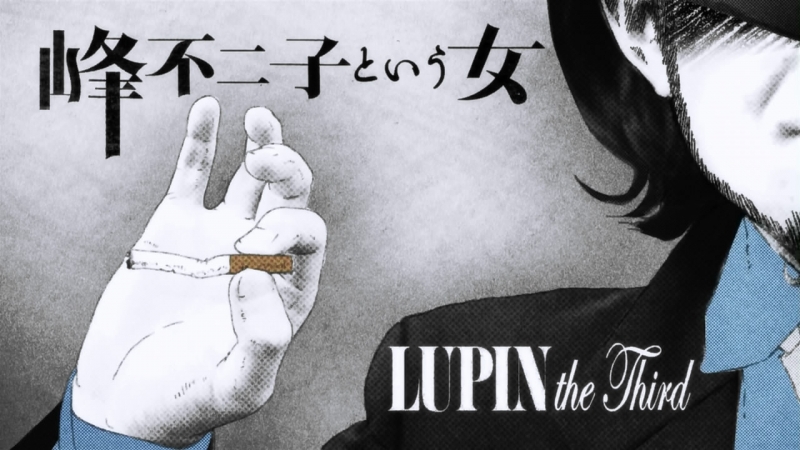 Perhaps Fujiko's greatest flaw is its insistence on a more serious narrative inside of its perfectly crafted chaos.

Perhaps Fujiko's greatest flaw is its insistence on a more serious narrative inside of its perfectly crafted chaos. I'm not familiar with any of the work of prolific series writer Mari Okada (AnoHana, Black Butler, Toradora!), but a few of the episodes are written by Dai Sato (Cowboy Bebop, Ergo Proxy), whose influence clearly shows. Basically, Fujiko reaches for a strange psychological story to explain the origins of its title character, one that in the end far out-scopes the tone of the Lupin franchise (at least from my experience with the manga and films). Okada alludes to the back-story throughout the series, but only delivers it in the rather info-dump-y final episode, and when it hits, it doesn't quite feel right for the character or the franchise. That said, Fujiko wraps up cleanly, and manages to avoid messing with the Lupin canon while making that avoidance seem surprisingly natural.

In spite of its occasional slip-ups, The Woman Called Fujiko Mine sneaks, kisses, and blasts its way through a whole bunch of stylish set pieces (from a colorful city street in Cuba to a creepy amusement park), and leaves you with a big, goofy smile on your face by the time the final credits roll. And really, what more are we looking for from Lupin and the gang?

This review is based on an Elite (but non-HD) stream on Funimation.com, provided by FUNimation for review purposes.