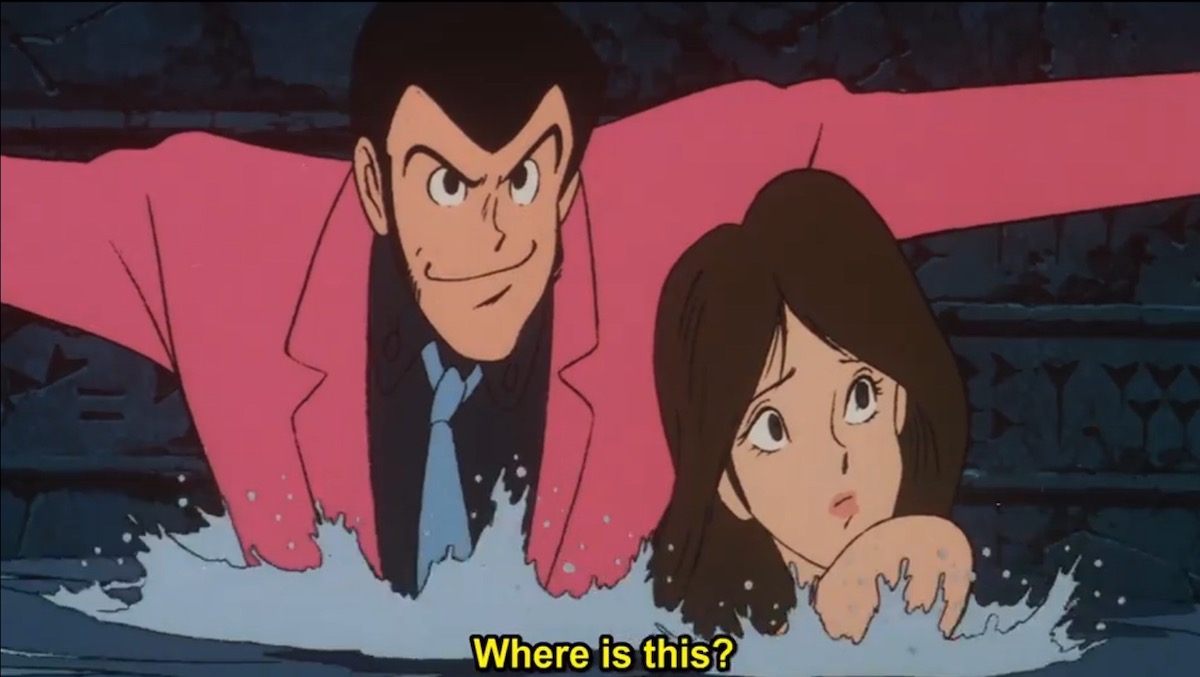 This year marks the 50th anniversary of the first TV appearance of Lupin III. In Tokyo Movie Shinsha’s first Lupin anime series, the character — grandson to Maurice Leblanc’s literary thief — traveled the globe with his gang of lovable criminals while sporting an iconic green suit jacket. The color has changed over the years, with each new hue roughly corresponding to a new approach to the character. For this year’s Anime Secret Santa, I decided to try on 1985’s Lupin III: The Legend of the Gold of Babylon — the first and only Lupin movie in the controversial pink jacket era.

The first three Lupin films offer a fun and concise introduction to the many faces of the gentleman thief.

If the red jacket signals a sexier, cooler Lupin as seen in Mystery of Mamo and the green jacket gives us the dashing heroics of Castle of Cagliostro, then the pink jacket means an extra dose of mischief and slapstick comedy. Mamo and Babylon both suffer by comparison to Hayao Miyazaki’s masterful work on Cagliostro, but taken together as a trilogy, the first three Lupin films offer a fun and concise introduction to the many faces of the gentleman thief. 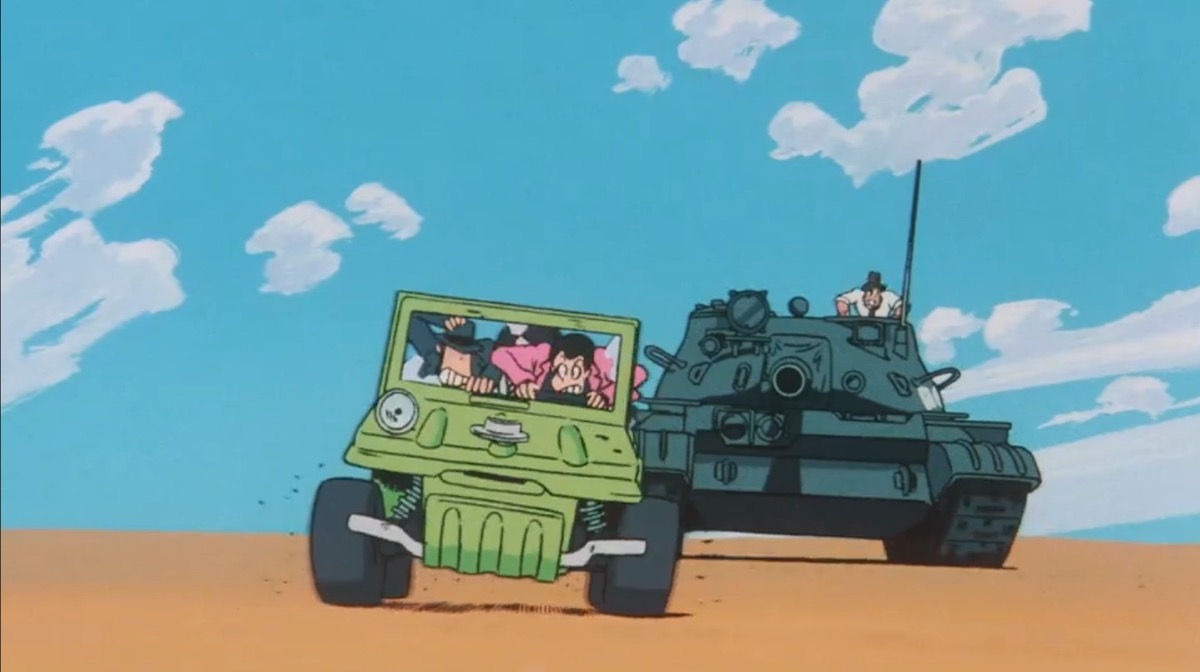 Our story begins in New York City, a fact made abundantly clear in the opening credits sequence featuring establishing shots of the skyline set to city pop banger “Manhattan Joke.” (It’s one of many excellent Yuji Ohno tunes that plays throughout the movie, and it’s always a delight when it pops back up in instrumental form.) Lupin is visiting the Big Apple while on the hunt for a fabled Babylonian treasure, but he’s not the only one. Mafia boss Marciano has made it his life’s work to find the legendary gold and isn’t too keen on Lupin getting in his way. The pair’s rivalry takes them from New York to Europe to an Iraqi archaeological site in search of the gold. Then, back in New York, the film culminates in a bizarre ancient aliens-themed finale. Meanwhile, beleaguered ICPO agent Zenigata is after Lupin again, flanked this time by a gaggle of unruly ICPO beauty contest winners. The closest thing to a Lupin Girl is Rosetta, a drunken old woman who has a mysterious connection to the ancient treasure. 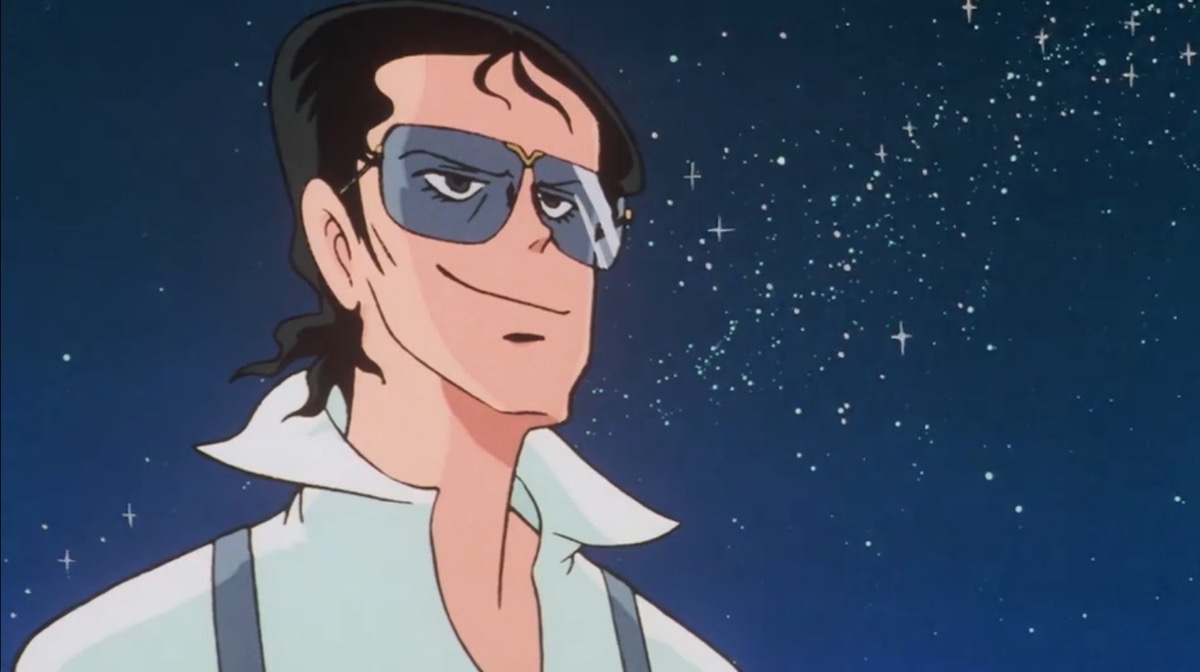 There are multiple MacGuffins but no real stakes associated with them to drive the story forward. It’s easy to lose track of who has what and why it matters.

All of the basic elements of the Lupin formula are there, but Gold of Babylon is a good reminder that a dish is more than the sum of its ingredients. The whole movie has a strange lack of urgency, especially in the first act’s overlong, Looney Tunes-esque motorcycle chase between Lupin and Zenigata (prominently featuring an offensive caricature of a black woman, no less). There are multiple MacGuffins, including the gold itself and a collection of tablets pointing the way to it, but no real stakes associated with them to drive the story forward. It’s easy to lose track of who has what and why it matters. Lupin and Marciano’s gangs zip between set pieces almost at random, making each one feel like an isolated caper rather than a piece of a larger story. Even worse is Rosetta’s storyline, which starts with an unfunny gag about her trying to seduce Lupin and eventually unfolds into something about gods and ancient aliens. All of this occurs in near complete isolation from the Marciano conflict; almost nobody but Lupin even speaks to Rosetta! 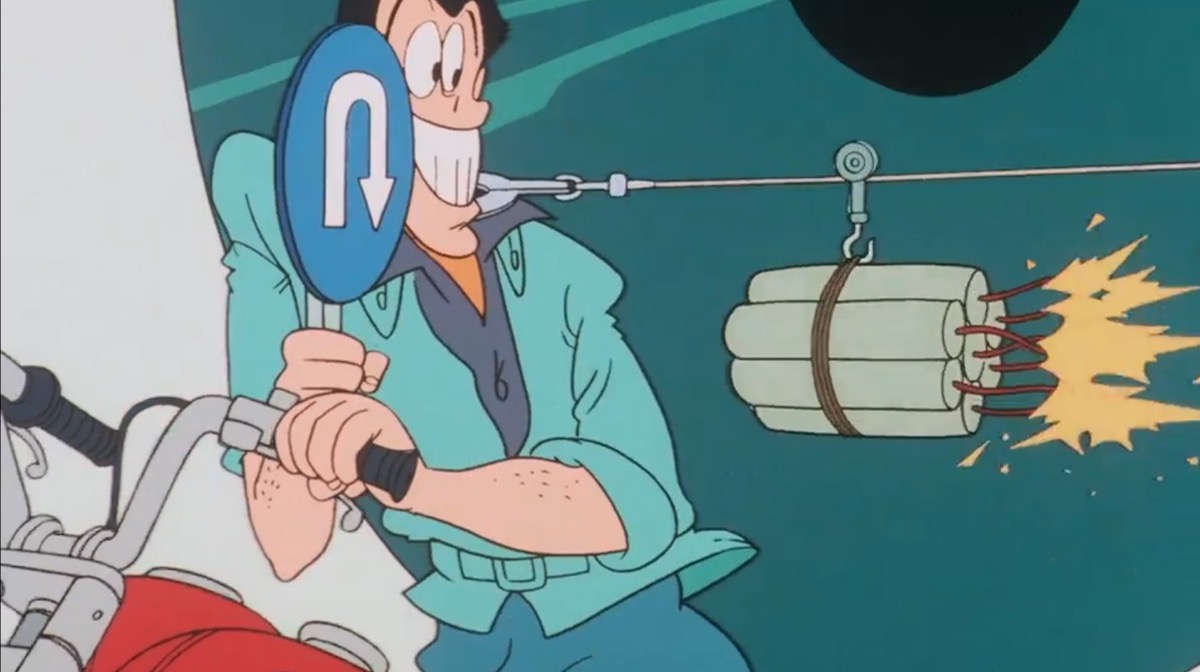 Gone are the cuddly faces and graceful motions of Miyazaki, replaced here with lopsided bean heads and screwy limbs.

Gold of Babylon is most enjoyable when you let go and embrace the silliness. A mafia enforcer punishes his underlings by slapping them on the butts with an electrified fly swatter. Zenigata recruits the ICPO girls after a pageant full of ludicrous cultural stereotypes (the Italian one is named Miss Lasagna). In a gag ripped straight out of a Road Runner short, Lupin sends a stick of dynamite back to Zenigata by holding up a “U Turn” sign. The highlight of the movie is a three-way battle between Lupin’s gang, Marciano’s thugs, and Zenigata’s ICPO beauties aboard a moving train. I had so much fun watching it that only at the end did I realize I had no idea why any of it was happening.

A goofier Lupin comes with goofier visuals as well. Gone are the cuddly faces and graceful motions of Miyazaki, replaced here with lopsided bean heads and screwy limbs. The designs are so different from what I expected that in a few scenes I didn’t even recognize perennial femme fatale Fujiko! The animation is reminiscent of the work of Yoshinori Kanada — a focus on zany motion and extreme poses over plausible physics — though the man himself surprisingly never worked on the Lupin franchise. As an accompaniment to the slapstick the visuals work wonderfully. However, they’re a lot harder to swallow when the movie takes a hard left into serious material about aliens and the Tower of Babel. 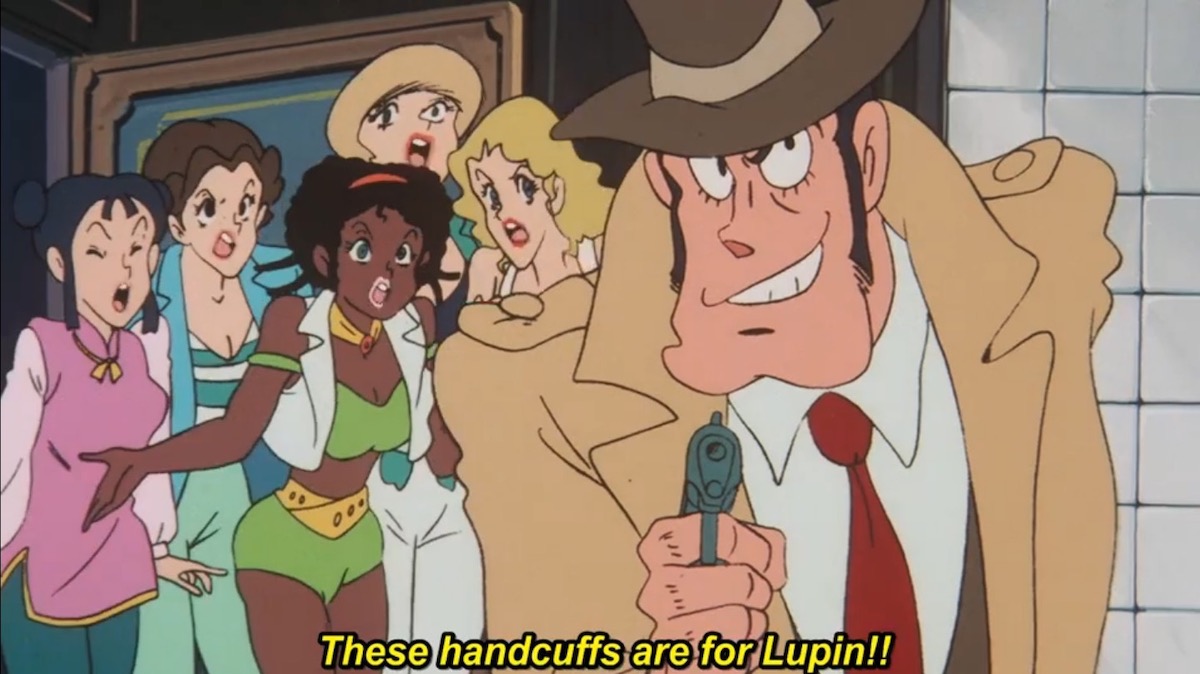 It’s a shame that the film never finds its footing, because there are lots of fun little nuggets mixed in among the missteps.

So how did Gold of Babylon turn out so weird? Believe it or not, it could have been weirder. None other than Mamoru Oshii (Ghost in the Shell) was initially slated to direct, and he developed a series of story concepts with Yoshitaka Amano (Final Fantasy) contributing designs. In true Oshii style, he pitched some strange stuff, including a film in which Lupin never even appeared. His material was too out there for TMS, who replaced him with Part III episode directors Seijun Suzuki (himself a famous live-action auteur) and Shigetsugu Yoshida. Still, some of Oshii’s ideas made it through to the final product — albeit heavily modified — which might explain why the film feels so scatterbrained. And Oshii and Amano got the last laugh when they repurposed their rejected concepts for the legendary art film Angel’s Egg.

It’s a shame that The Legend of the Gold of Babylon never finds its footing over its 100-minute runtime, because there are lots of fun little nuggets mixed in among the missteps. I would have liked to see another stab at a pink jacket movie that leaned all the way into comedy, or a fully realized version of one of Oshii’s bizarre pitches (imagine Lupin’s own version of Urusei Yatsura: Beautiful Dreamer). As it is, the film is enjoyable primarily as an odd detour for curious Lupin fans working their way through the franchise. 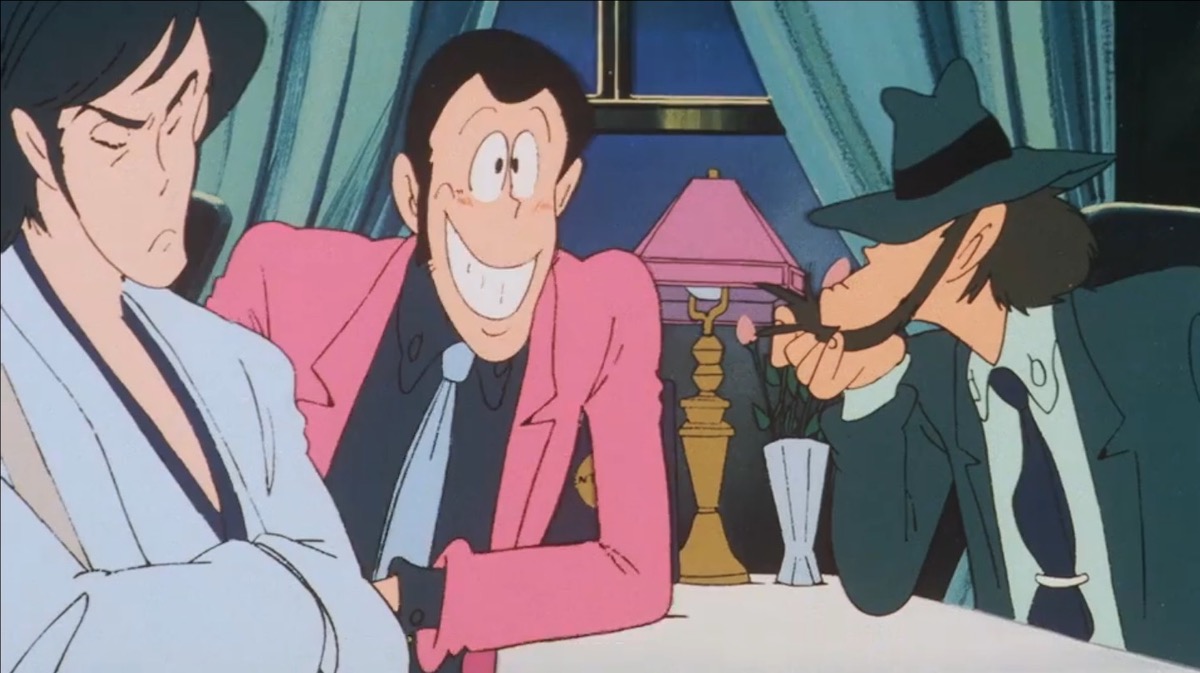