The three viewing choices presented to me for this year’s Anime Secret Santa were Natsume's Book of Friends, of which I have seen one episode and already know I’d enjoy seeing more; In This Corner of the World, which I have not only seen previously but also discussed in an episode of Oldtaku No Radio; and Hinamatsuri. In choosing the latter, I found myself reluctantly committed to watching a series with a synopsis that boiled down to two of my least favorite setups so prevalent in anime: alien or heavenly girl falls through the roof of a milquetoast protagonist, and magical, superhuman, or supernatural kids in a non-magical, -superhuman, or -supernatural world. With that said, let’s snip the bow, rip off the wrapping paper, and dig into my chosen title: Problem Children are Coming from Another World, Aren’t They? Hinamatsuri. 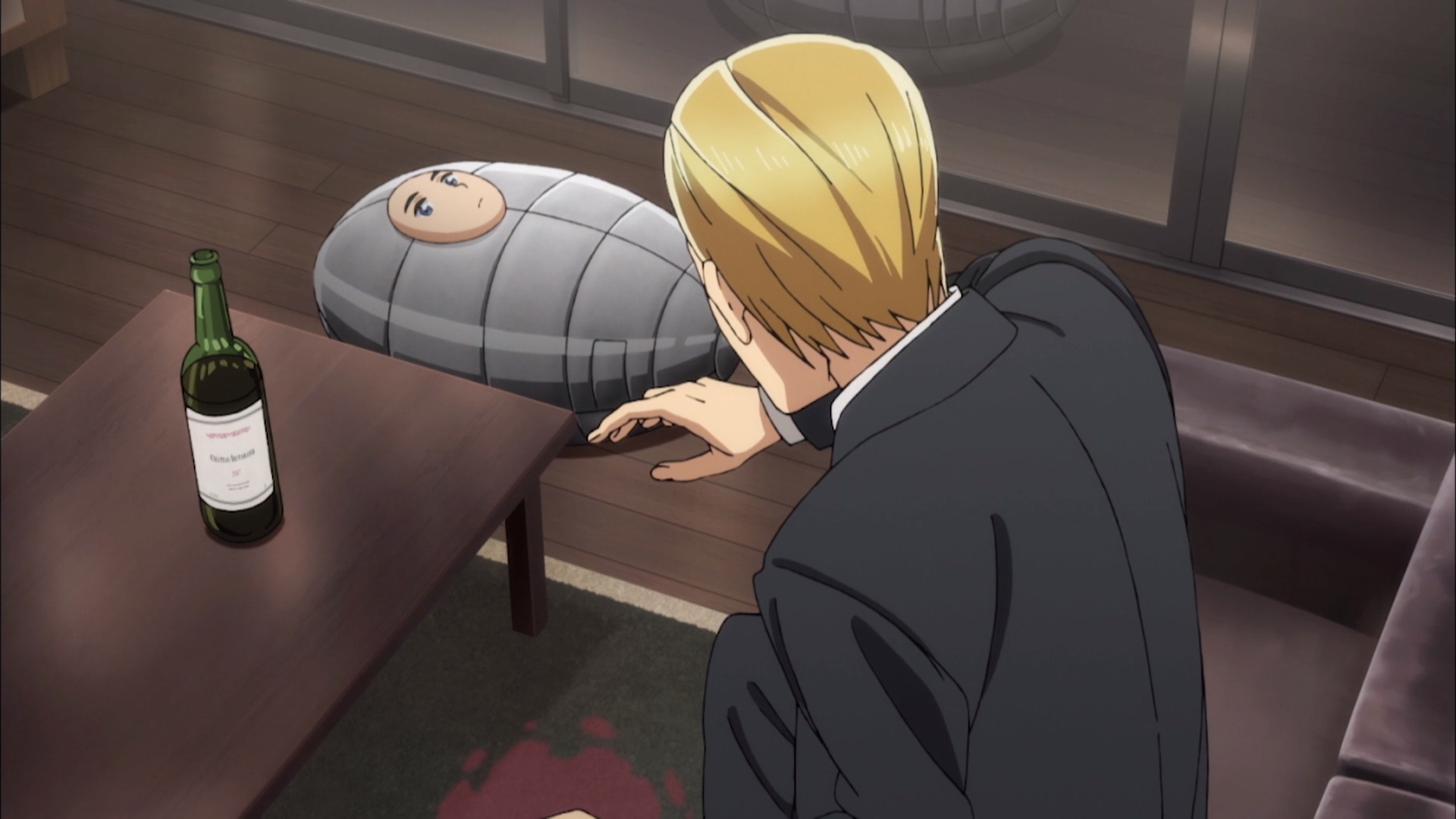 Adapting Masao Otake’s manga of the same name, Hinamatsuri tells the tale of a yakuza member whose precious vases and bachelor lifestyle are shattered after a middle school-aged girl, wrapped in a steel cocoon, drops into his living room via a mysterious portal. Yoshifumi Nitta, the aforementioned goon, initially takes the unexplainable experience as his cue to put down the wine and go to bed — where, he assumes, he’s already dreaming. The problem is that Hina, the girl who’s wrapped up in that steel cocoon, is in the exact same place and position when he wakes.

While the story of a thug and an alien becoming more human by interacting with a new world is surprisingly warm and delivers a genuinely heartfelt appeal, the whole shebang is essentially driven by the lampooning of both of its foundational tropes.

To his own befuddlement, Nitta does not kick Hina out. This isn’t entirely due to his being intimidated by the sheer magnitude of the telekinetic powers she initially demonstrates out of childish spite (and occasionally releases uncontrollably). Instead, his acceptance of the situation at hand owes largely to the influence of a strange moé aura Hina unknowingly exudes. From there, Hinamatsuri is a story of Nitta balancing his climb up the yakuza ladder and his new role as caretaker, while Hina deals with learning about and adjusting to her new station and surroundings. And while the story of a thug and an alien becoming more human by interacting with a new world (figuratively and literally, respectively) is surprisingly warm and delivers a genuinely heartfelt appeal, the whole shebang is essentially driven by the lampooning of both of its foundational tropes. 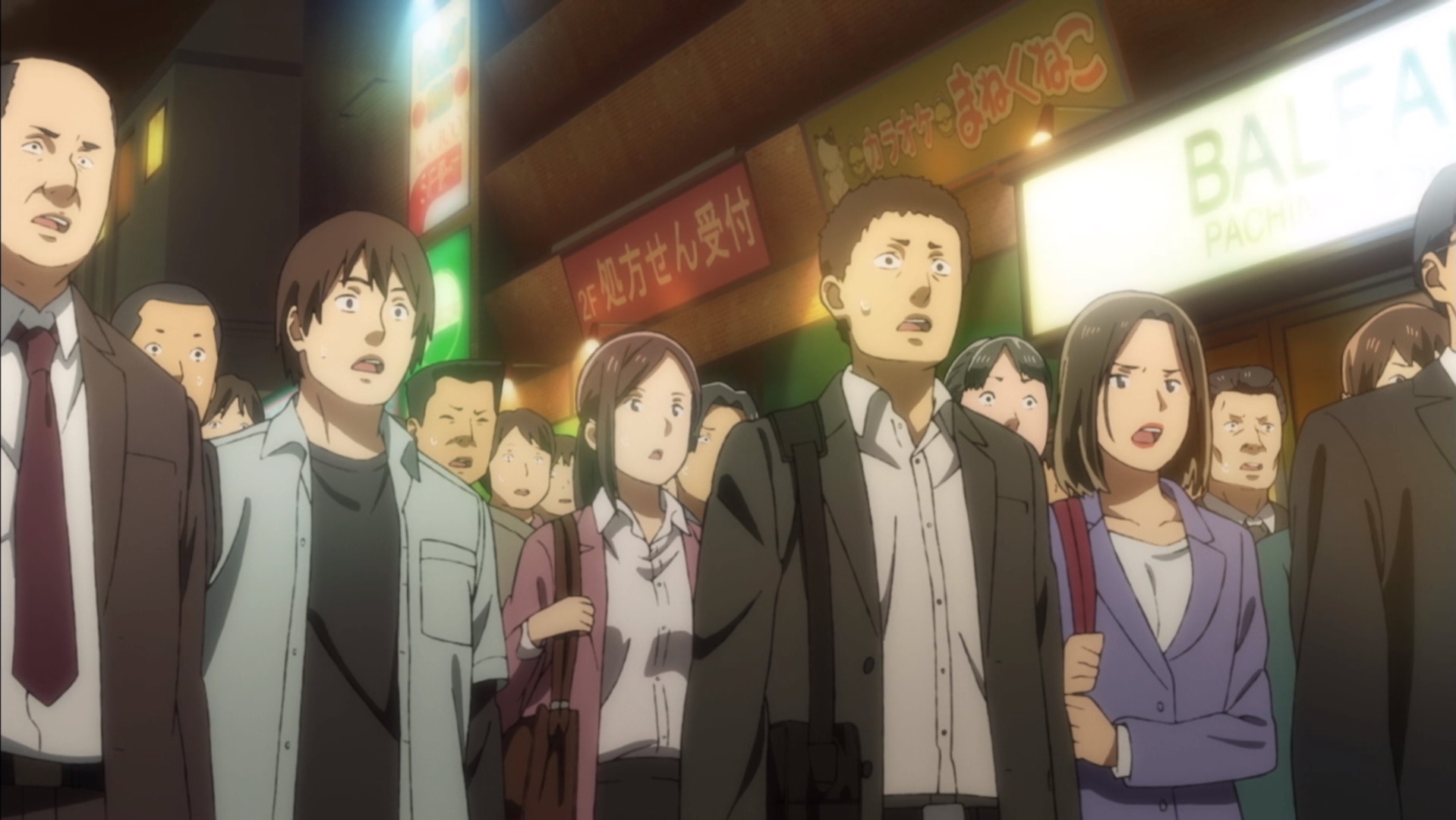 There’s at least one guffaw in each of the early episodes, many of them stemming from how readily those in the mundane world accept the incredible events that keep happening. A perfect example of this is the showdown between Hina and Anzu, another telekinesis user from Hina’s world, wherein the first metaphorical punch is relegated to a mundane game of rock, paper, scissors. The supernatural power show that ensues, a display of telekinetic endurance, is further mocked when Nitta can’t withhold his laughter at the contenders’ hilariously flapping faces. (Picture Goku leveling up while wearing the face of a blood hound with its head stuck out of the window of a moving car.) The destructiveness of Hina’s power isn’t always a laughing matter however.

Hina’s power was abused by adults in her world for their own gain, something Nitta cannot bring himself to do if it requires putting her in dangerous situations. This is not to say Nitta doesn't accidentally benefit from Hina’s decision to use her powers for him or that Nitta doesn’t occasionally use food as a reward to persuade Hina to use her power to make the best out of a bad situation. So it's not the supernatural being who takes care of a milquetoast main character but rather a dynamic relationship between a man and an adopted daughter, where each is constantly trying to get a feel for how the other operates under varying situations.

The series does a lot more than it has to with Hitomi, who turned out to be my favorite in the show.

Outside of the main characters, the speed with which the incredible is taken for granted materializes in Hitomi Mishima — another middle school-aged girl (of the normal world) who is comedically windswept by varying circumstances and blackmailed into working as a bartender. It’s not that she’s the “can’t say no” type, it’s just that, as savvy as she is, she can’t outsmart the yakuza bar owner who’s taken with Hitomi's gifts for cocktail creation and customer engagement. The series does a lot more than it has to with this character, who turned out to be my favorite in the show (aside from bar owner Utaku Sakura). But for all the comedy, the show really shines in how it can portray empathy and warmth in the coldest of places. 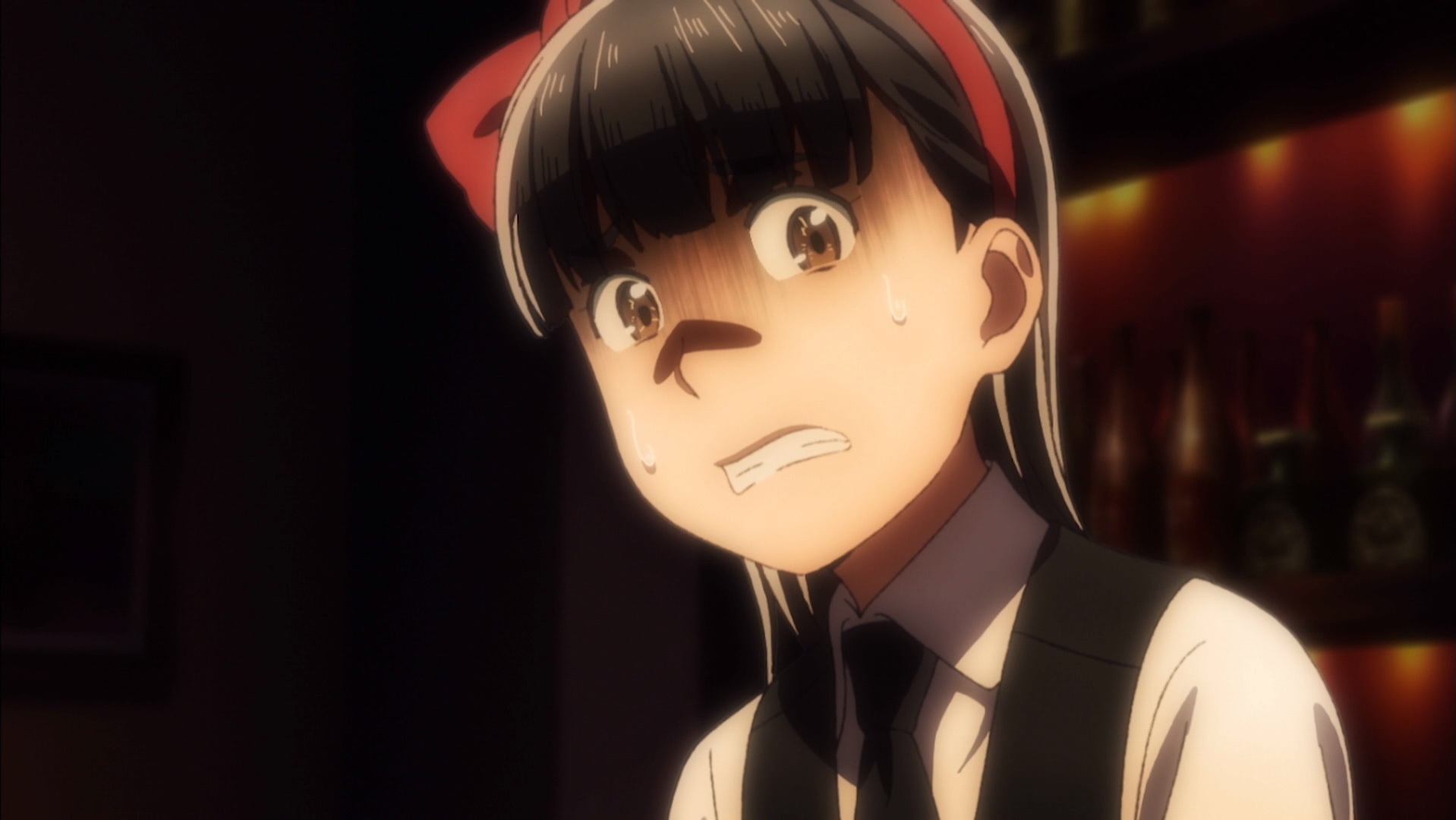 Even while its rationale is ultimately muddled, I was taken aback when Hinamatsuri made another effort to go an extra mile that it didn’t need to — this time in exploring the environments Hina and Anzu call “home.” Hina finds herself adopted into a lush, penthouse-like apartment, while the ultimately stranded Anzu decides to live the homeless life. A homeless man shows her kindness, then introduces her to a community wherein she eventually earns a place as one of their own. The show doesn’t go heavy-handed on the socio-economic commentary, but it definitely brings up points that have consequences that affect both characters’ attitudes and lives as well as how they interact with one another, people within each other’s circles, and the public at large. One of my favorite moments is when Hitomi, who happens to be a friend to both Hina and Anzu, is in the company of both for the first time.

The show does feel like it hits a slump a little later on. I remember asking myself, “When is the next girl going to fall from the sky?” …and then one did. I don’t know how much more mileage she actually brings to the story, but that her arrival is nothing of consequence, at least initially, and how the show exploits that for comedy, is thoroughly enjoyable. One can easily see how girls dropping in from another world could continue on and on. The manga ran for 10 years, so I’m guessing there’s a ton more to adapt. I’d be more than happy, however, just to have this remain a single-season show even if there isn’t a complete ending.

Overall, this was an unexpectedly fun watch with a lot of laughs, some pretty great reaction shots, engrossing use of characters, and even some genuine feels that never felt forced. So thank you, Santa, whoever you are. Your recommendation turned out to be the epitome of the spirit behind this weeby tradition: a show I would have otherwise never seen but sincerely enjoyed. 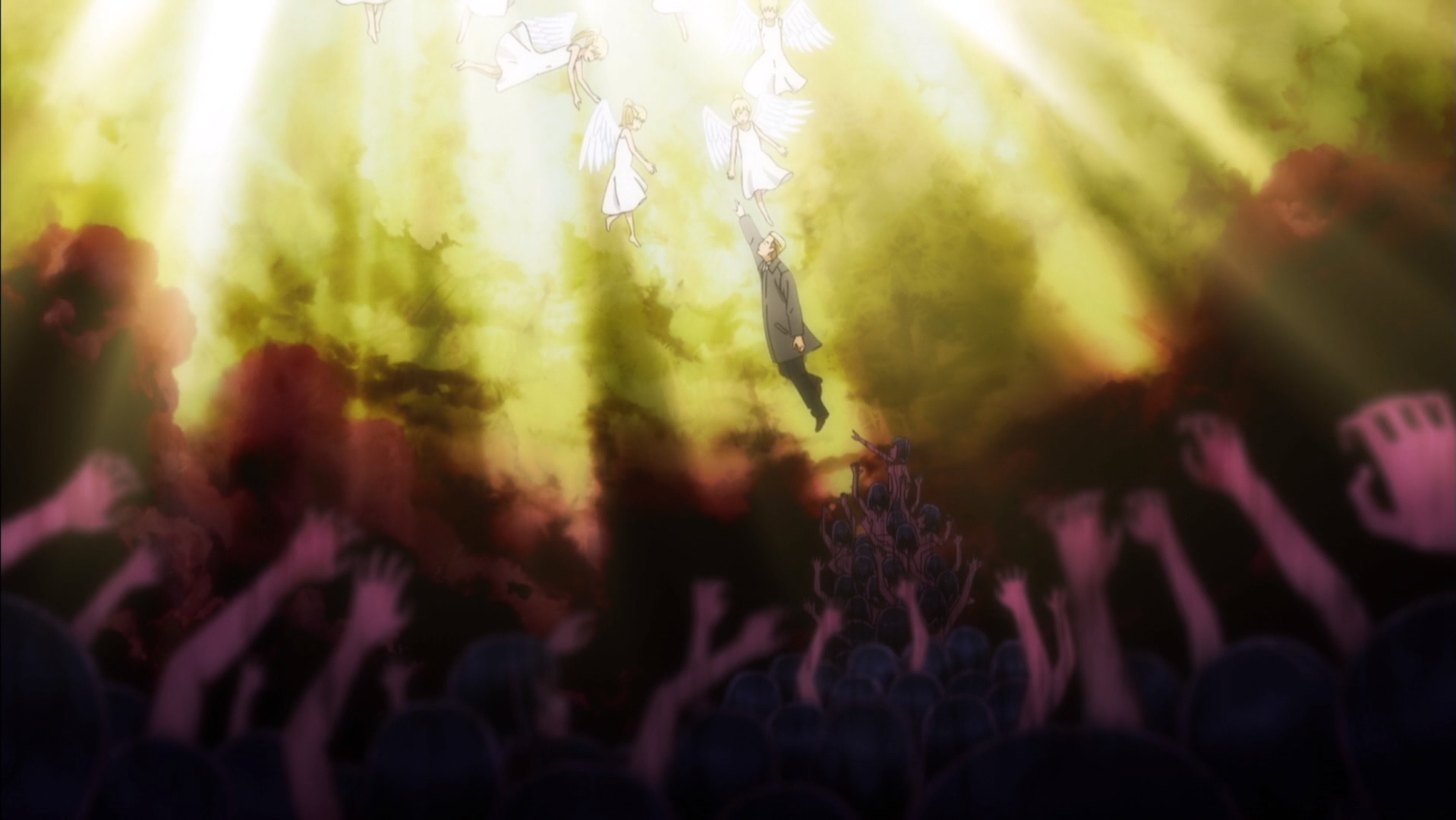