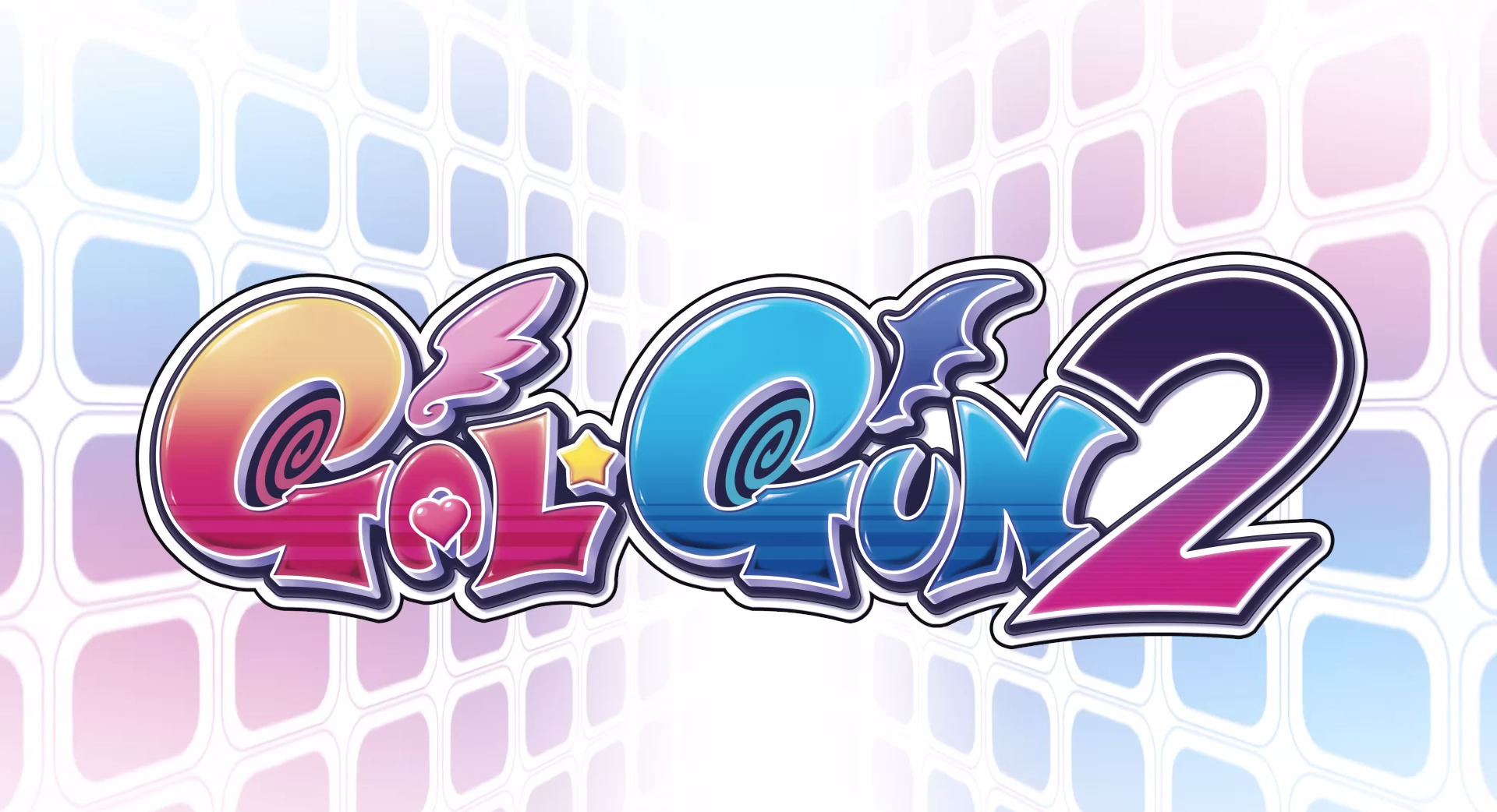 I’m pretty sure I’m now wanted by the law in at least 11 states after playing this game ... maybe all 50 after giving into my completionist tendencies and going for all the “achievements.” But, hey, at least I still haven’t watched Fate/kaleid liner Prisma Illya?

Developed by Initi Creates and published by PQube Limited, Gal Gun 2 is a rail/light shooter where the player fills the pants of a high school boy who is touched by an angel named Risu to help in her demon hunt. Heaven and Hell have an agreement by which demons and angels are not allowed to fight each other, so it’s up to the playa to earn enough demon-busting points in 20 days or less to save Risu’s cushy corporate gig at AR Co. (Angel Ring Company) and keep her from being banished from Heaven. How does one bust a demon? Why, with the latest in eros-centric tech of course!

Gal Gun 2 is just about as repugnant as I’m making it out to be … but also kind of a riot (at least upon what should be your first and only play-through).

Risu provides “the chosen hero of mankind” with one pair of Pheromone Goggles, which lets him see demons and angels. But the goggles also have the pesky side effect of revving up the libidos of the opposite sex to the point where they swarm the wearer. That isn’t all bad, of course, seeing as the whole reason Risu chose this poor, nameless boy is that demons are possessing some of the girls at the all-girls school that this young man evidently attends. 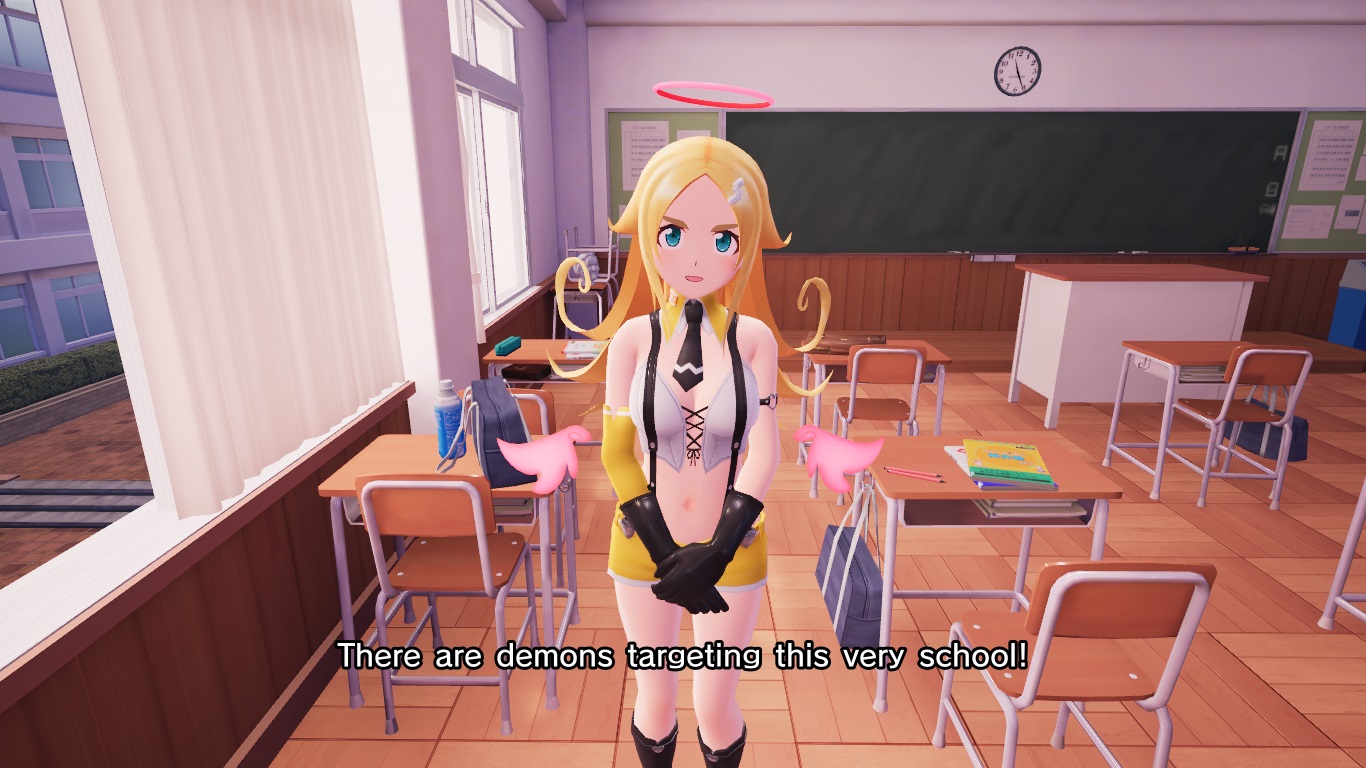 You have to step back and wonder about this particular choice in life when one of the girls asks, “Is this a game for grown-ups,” after you’ve rapid-fire pheromoned her in whichever erogenous zones the game pointed you to.

To strip the clingy demons from the heads and shoulders of his crazed classmates, the goggled gigolo wields Risu’s second gift: the Pheromone Shot. This combination scent spreader and succubuster brings an innocent (albeit knee-weakening) moment of euphoria to the pure maidens that opens a window of escape. When unloaded upon bedeviled beauties, however, the excretions exorcise the demons to within arms length so that the built-in vacuum can suck up the supernatural pests. Alternatively, the vacuum can be used without the aid of the Pheromone Shot to directly suck off any demon(s). Unfortunately, doing so can take a little more time and energy — elements which are not on the boy's side as an onslaught of shouted confessions pierce his ears like needles, hand-delivered love letters cut like razor blades, and kisses rain down like acid.

Those are the basics of this most recent installment in the rail/light shooter series. It’s just about as repugnant as I’m making it out to be … but also kind of a riot (at least upon what should be your first and only play-through) due to the ridiculous degree of wish fulfillment the game so openly flaunts. Even though the rail/light shooting, protection, and scavenger hunt missions are nearly identical in execution, a madness is born within this monotony. As the lovelorn sighs of those brought to euphoria or ecstasy compound with the sight of would-be assailants dropping to the ground in swoony, cartoonish wiggles, it’s impossible not to laugh at the inundation ... especially if you’ve gone all out and dressed the multitudes of all three classes (and teachers!) in various forms of fetishistic attire with preposterous props. 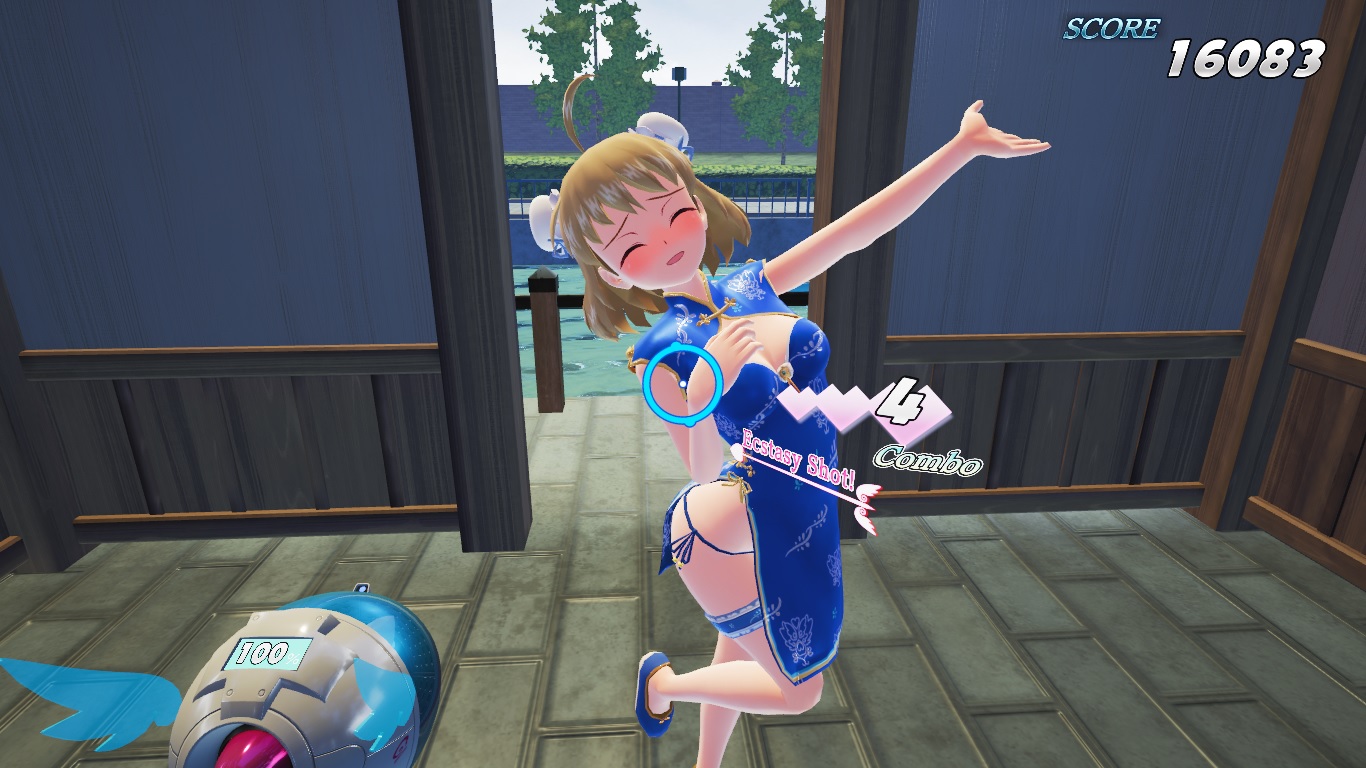 Calling this game a laudable satire would be easy if it was a one-shot and some of its more lascivious leanings were kept in check by better writing and scenario planning.

In addition to the main storyline (Risu), players can pursue side-stories with childhood friend Nanako and hikikomori-next-door Chiru as well as one pair of fellow demon-hunting classmates. The climax for each is a “purification” mission, in which you are ultimately tasked with exorcising demons from their bodies via the game’s gossamer metaphor for sex (otherwise known as “doki-doki mode”). Mind you, the characters in this game are largely comprised of first- to third-year high school students. And while the lustful lines screamed during these encounters often amusingly correlate to the girls’ interests (track, chess, aliens, etc.), you have to step back and wonder about this particular choice in life when one of the girls asks, “Is this a game for grown-ups,” after you’ve rapid-fire pheromoned her in whichever erogenous zones the game pointed you to and then coquettishly says, “We can do more,” in her costume (or less) after the gameplay is complete.

Speaking of costumes, a lot of love went into them, and their presence (as mentioned earlier) shows the absurd depths the game designers dredged in the making of this title. I haven’t gamed in some time, so take it with several tablespoons of salt when I say the costumes’ textures and colors under “natural” and “artificial” lighting conditions as well as the fit and flow on the various girls are pretty impressive whether encountering them during doki-doki mode, gameplay, or a rendezvous. 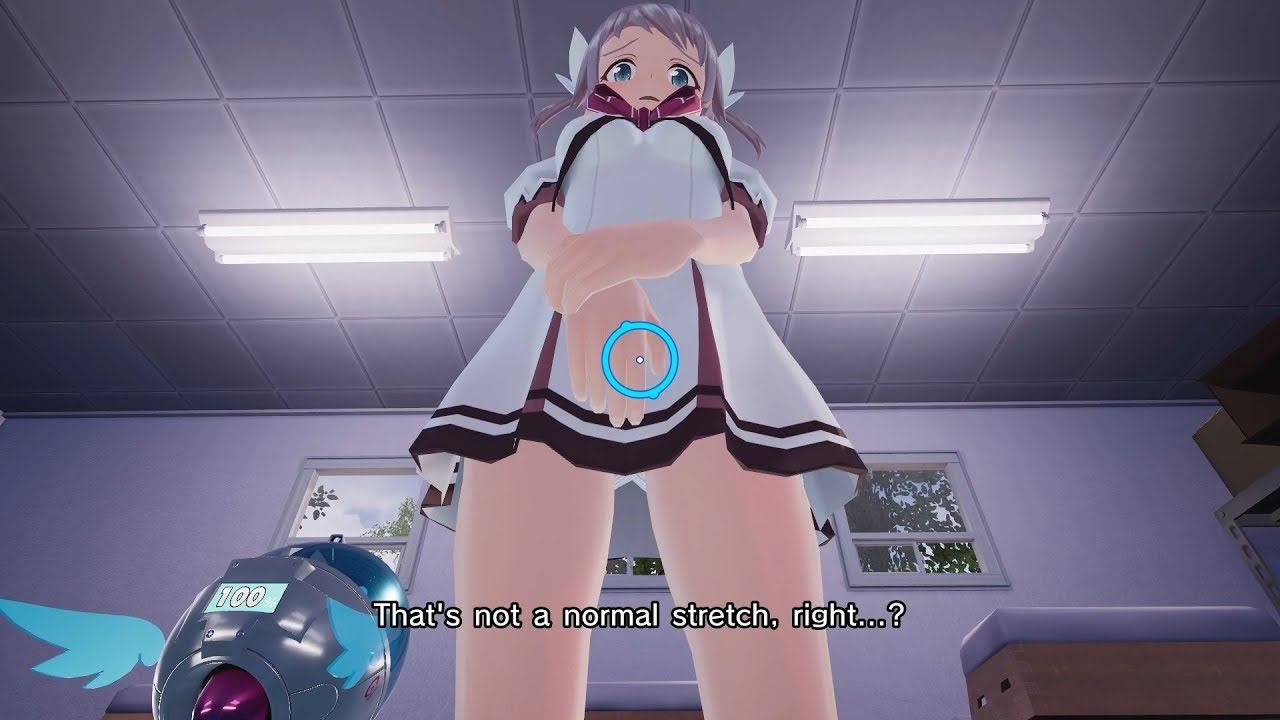 Oh yeah, did I not mention that those so inclined can spend all the time they want obsessing over renderings of latex, cotton, plastic, pleather, silk, and skin during any given rendezvous? These are events, available between missions, wherein any girl you’ve helped out during a mission can be called to any place on school grounds. There, they will wear whatever outfit you want them to; kiss, stomp, grind, or confess endlessly to your desire; and undergo purification at your whim. Bonus: offer the kids enough candy and they will even consent to come directly into your van to your home for further purification.

Calling this game a laudable satire would be easy if it was a one-shot and some of its more lascivious leanings were kept in check by better writing and scenario planning. But Gal Gun 2 is one sequel of at least a few, and the larger portion of its means seem pointed towards the ends of objectification and sexualization of young girls. And if not playing for that, subsequent playthroughs get real boring real quick due to the repetitive nature of the missions. That’s despite some genuinely chuckle-worthy jokes, quality double entendre, and even some legitimate, adrenaline-fueled doki-doki moments during the battles with the hormonal horde. It should be shorter. It should be less sleazy. And no-one over 18 should be playing this ... more than once. 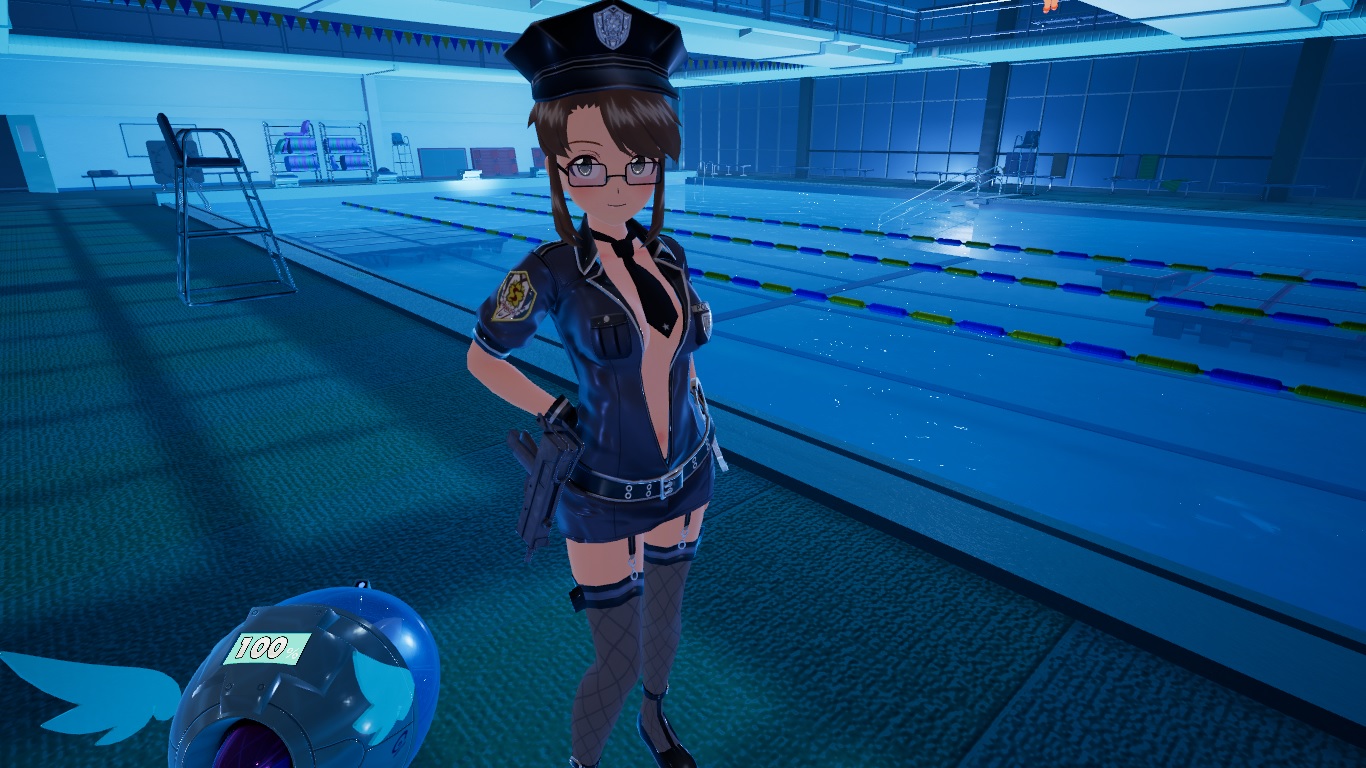