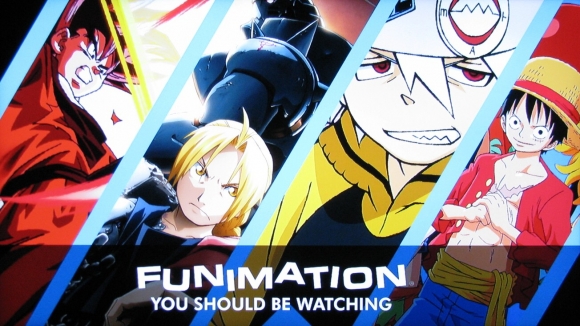 While this review was ready the same day the app launched, we decided to hold off on posting it for a while to make sure everything was stable. With the 2014 summer season almost here and select titles from it already starting to air, read on to check out one more way to stream some of the forthcoming simulcasts and more!

Roughly eight months after the clumsy launch of their own revamped online video portal, one and a half years after their main streaming competitor, Crunchyroll, lunched their app on Xbox360, and seven months after the launch of PS4 and Xbox One consoles, FUNimation finally gets hep and launches their own app … on a last-gen console. To be fair, FUNimation’s already made their app available elsewhere—handhelds, tablets, Roku, etc.— in the meantime (with less than encouraging functionality even for EVS members), and the Xbox360 is still a formidable entertainment system. So what does this long-overdue app offer and (more importantly) does it work? Find out after the break! 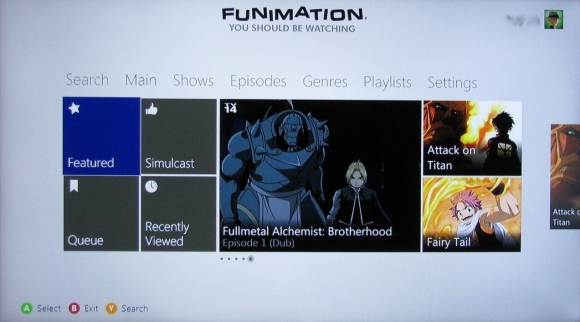 After a nifty title card featuring four of FUNi’s more well-known licenses, visitors reach the Main tab of the UI (User Interface) that features Featured, Simulcast, Queue, and Recently Viewed tiles; a rotating pane of picture panels for five random episodes (all were dub at the time of this review) from as many series; and two static picture panels for random shows (Attack on Titan and Fairy Tale at the time of this review). The Featured tile just links to titles that are either popular or that FUNi is pushing, the Simulcast tile leads to current simulcasts, and the Recently Viewed tile holds a list of recently watched episodes. After logging into the FUNimation servers, the Queue tile lets visitors gain quick access to any shows they added to it via the app or the online video portal. Visitors can access other tabs by either pressing the LB or RB bumpers on the controller or scrolling relentlessly to the left or right via the D-pad. (The latter method will cycle through all available options before reaching the next tab. Users can also press up until reaching the tabs and cycle through them faster that way.) 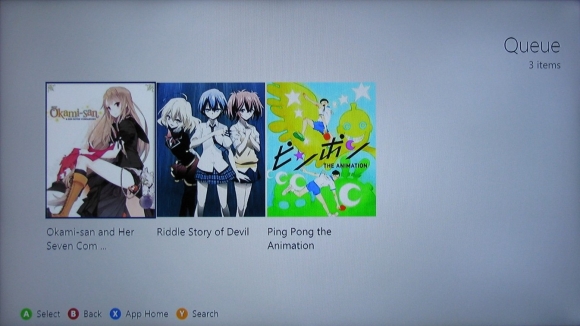 Other tabs include Search, Shows, Episodes, Genres, Playlists, and Settings. Switching between tabs via LB/RB is clean and seamless, but knowing which tab is currently selected can be visually difficult to discern as the difference between the tab title’s text colors—black (selected) and medium grey (not selected)—is almost indistinguishable. Search offers exactly that; press the A button and spell something out via the usual Xbox interface to find a matching title. Result tiles let visitors jump right to the show’s Overview page, where you can read a little about the premise, choose to enable or disable captions (when applicable), separately browse subbed episodes and dubbed episodes (when applicable) in sequence, check out related materials (clips, trailers, extras), or browse Related/similar titles. When browsing subbed or dubbed episode tabs, visitors have the option of determining how the episodes are presented for selection, after selecting “View More,” via the Most Recent, From Beginning, From End, or Most Popular choices. 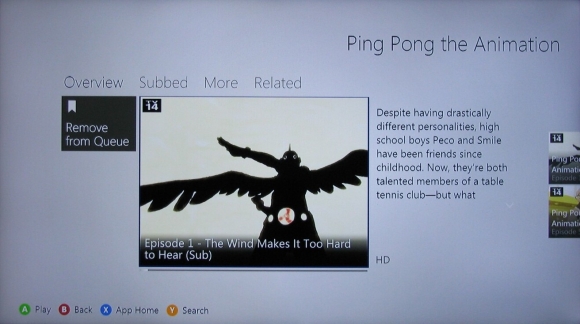 The Shows tab offers four picture panels for as many random shows and one “View More” panel that links to an extended list of shows. The Episode tab offers the exact same thing but for episodes. While the Genres tab offers the same functionality as the other two previous tabs, the tiles have no pictures on them of representative titles. The playlists tile is a bit more novel, offering similarly themed episodes from different titles; there are four such featured themes and then a “View More” button for, you guessed it … more (suggestions). The last tab, Settings, lets visitors set parental controls, find out about the Elite Video Subscription (EVS), and log in or out of the FUNimation server. The FUNi app also works with Kinect, and while the Setting tab does offer a Kinect Tuner option, I cannot test it out as I do not own a Kinect sensor.

Navigation is as smooth as it gets with an Xbox app (probably even smoother with a Kinect), and all the options are, for the most part, intuitive. My only qualm would be being made to land on the suggested episodes page before browsing more episodes, but the options for the latter are good and they’re only one (more) step away. The interface is clean and easy to read. My only issue there is the nigh indistinguishable color of the text for the selected tab when using the LB/RB bumpers to switch while in the tile section. Otherwise, the text enlarges just enough and gets a little darker to help visitors know where they are when manually moving the D-pad-based selector amongst the top tabs. Best of all, there is no extra charge for this app, unlike FUNi’s mobile apps, for EVS members. Even non-EVS members can watch non-EVS content for the price of the patience it takes to get through some commercials. A ton of EVS content was missing at launch, namely most of the episodes to current simulcasts, but that seems to have been completely corrected. And everything streamed at the time of this review did so flawlessly. Finally, we can enjoy FUNi simulcasts and archived content just like we’ve been enjoying for Crunchyroll. Kudos!