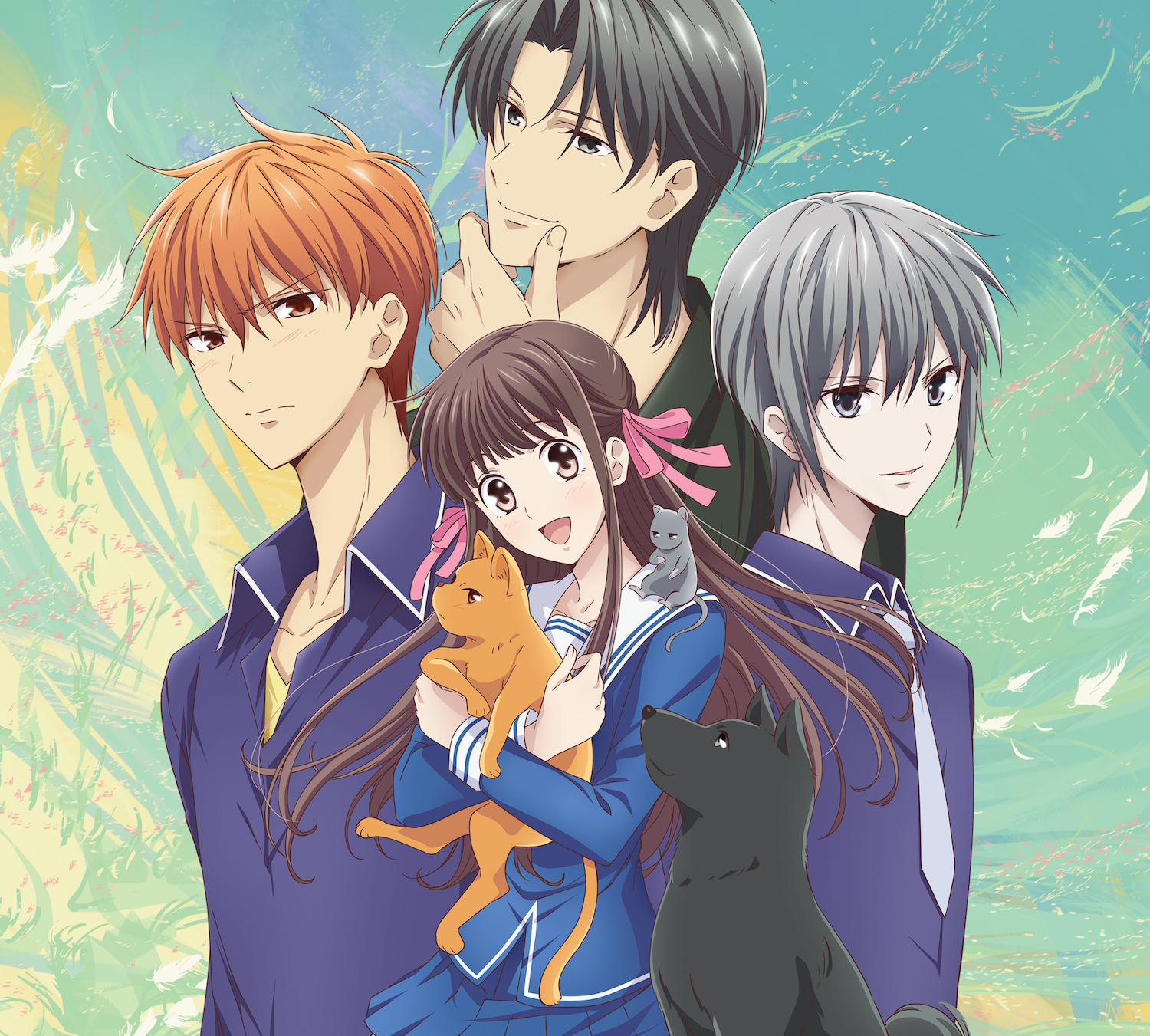 In the early 2000s, Fruits Basket was inescapable, thanks to a 26-episode anime series in 2001 and a best-selling Tokyopop manga release during the heyday of the North American shojo craze. I never watched the anime at the time, but in 2012 I read the first volume of the original manga by Natsuki Takaya. I didn’t like it very much. Then, 10 years later, my Secret Santa asked me to revisit the series via its 2019 retelling. Would a decade away from “Furuba” soften my opinion on this now-classic shojo franchise?

Even with 25 episodes in this first season, Yuki and Kyo’s backstories are barely explored until the final few hours.

Fruits Basket is a “reverse harem” anime, about a single girl living with a gaggle of attractive guys vying for her attention. The girl is Tohru Honda, a teenager living in a tent in the woods after the sudden death of her mother. The guys who take her in are the members of the Soma family, victims of a curse that causes them to transform into animals from the Chinese zodiac when hugged by a member of the opposite sex. The Ranma 1/2 inspiration is plain to see, but Fruits Basket doesn’t spend nearly as much time as that series on exploring the comedic potential for accidental transformations. 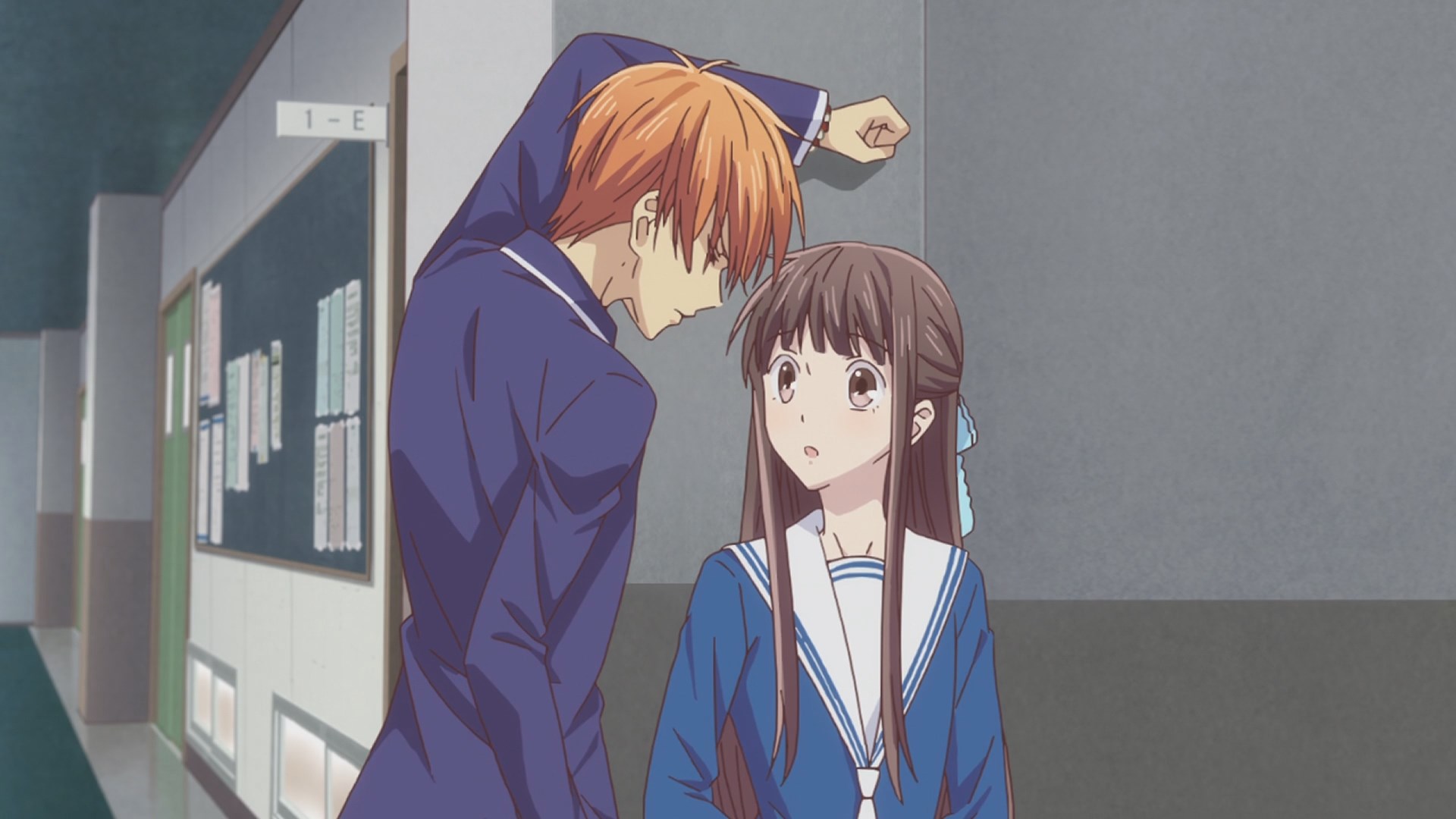 Oh no, this one is all about trauma, baby. Yuki Soma is the “prince” of Tohru’s high school, quiet and beautiful, but his cool exterior is the result of an inability to open up to people. Yuki transforms into a rat when hugged, prompting his natural rivalry with Kyo the cat, who hides his true feelings behind a hot-headed facade for reasons that are only explained much later. Tohru quickly becomes a sort of best friend-slash-housewife to Yuki and Kyo, as her natural kindness melts their hearts and gives her a glimpse into their inner worlds.

The trouble is that none of the three leads are particularly interesting characters. Even with 25 episodes in this first season, Yuki and Kyo’s backstories are barely explored until the final few hours, leaving them as crude cutouts of “the prince” and “the tsundere.” Most episodes feature some small hint about what’s going on under the surface — a furtive look from Kyo, a contextless flashback from Yuki — but you’ll have to wait until Season 2 to get closure on those threads. In keeping with harem anime tradition the worst offender is Tohru herself, who’s supernaturally cheerful in almost every circumstance and able to heal every character’s emotional wounds simply by existing. It may be facile at this point to complain about harem protagonists having it too easy, but for a girl who starts the story homeless Tohru is living a pretty charmed life, with very little conflict or motivation besides “wanting to learn more about the Somas.” 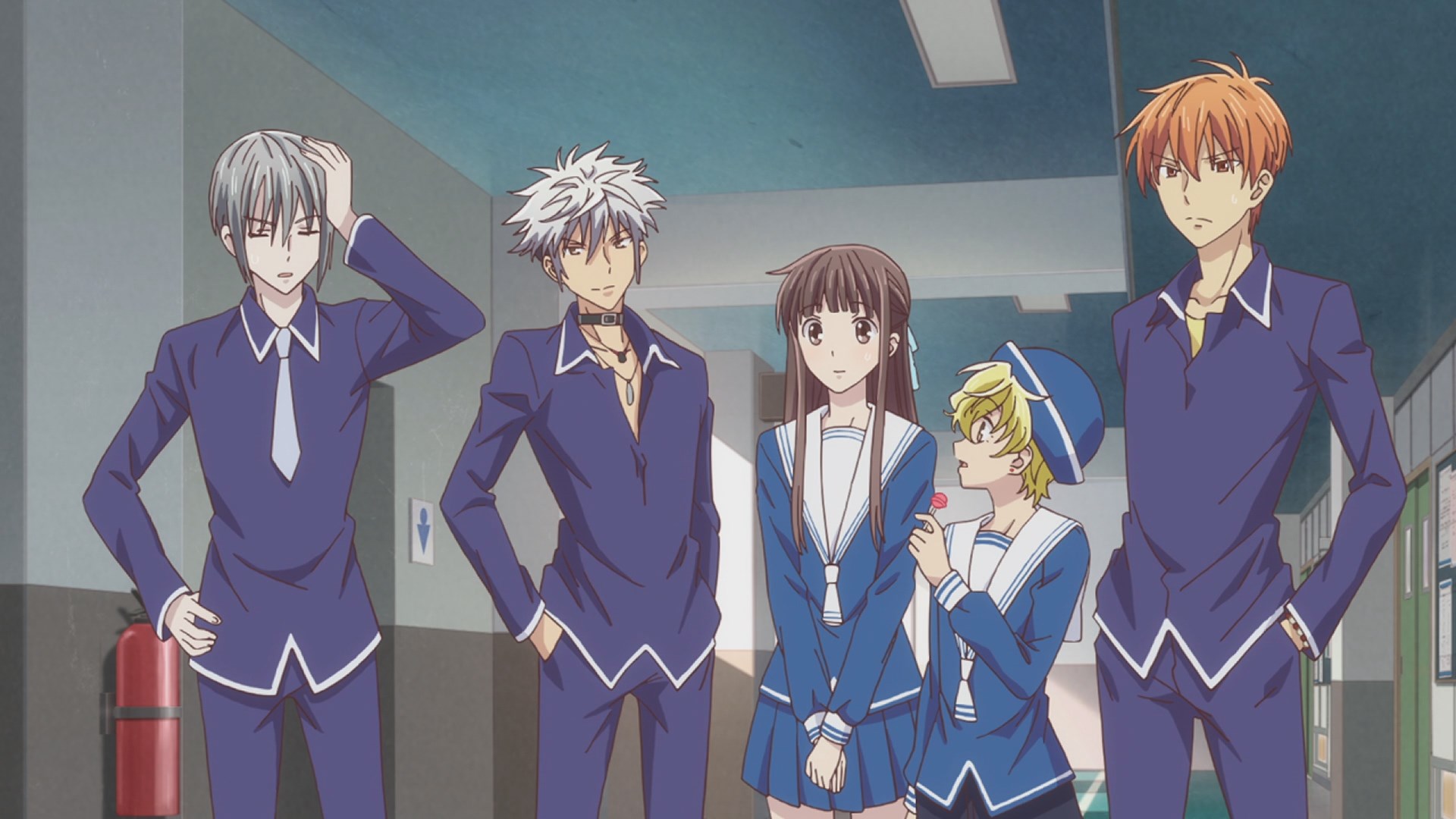 Tohru and her two main love interests may be dull, but the rest of the Somas inject a lot of necessary juice into the series.

Another way that Fruits Basket follows the harem tradition: the side characters are where it’s at. Tohru and her two main love interests may be dull, but the rest of the Somas inject a lot of necessary juice into the series. There’s Shigure (the dog), an easygoing novelist and inveterate gremlin who acts as the teenagers’ guardian. Not content with one, Takaya provides TWO shotas in the form of adorable Momiji (the rabbit) and cocky Hiro (the sheep), a welcome innovation. My personal favorite is Yuki’s older brother Ayame (the snake), a loud-mouthed, well-intentioned idiot whose brotherly affections are lost on Yuki. Then there are Tohru’s friends: a brash former girl delinquent and a weirdo goth girl who won’t stop talking about sensing “waves.” They almost feel like they’re airlifted from a different, better show.

The tone of the series deviates pretty wildly, and it's at its best when it goes all-in on comedy or drama. Ayame makes for great straight-man-funny-man routines, and some of the most compelling episodes hone in on specific characters’ tragic backstories, including one highlight about a character who wiped his own fiancé’s memory of him. When episodes whip back and forth between the two it’s hard to really get situated in either mode. 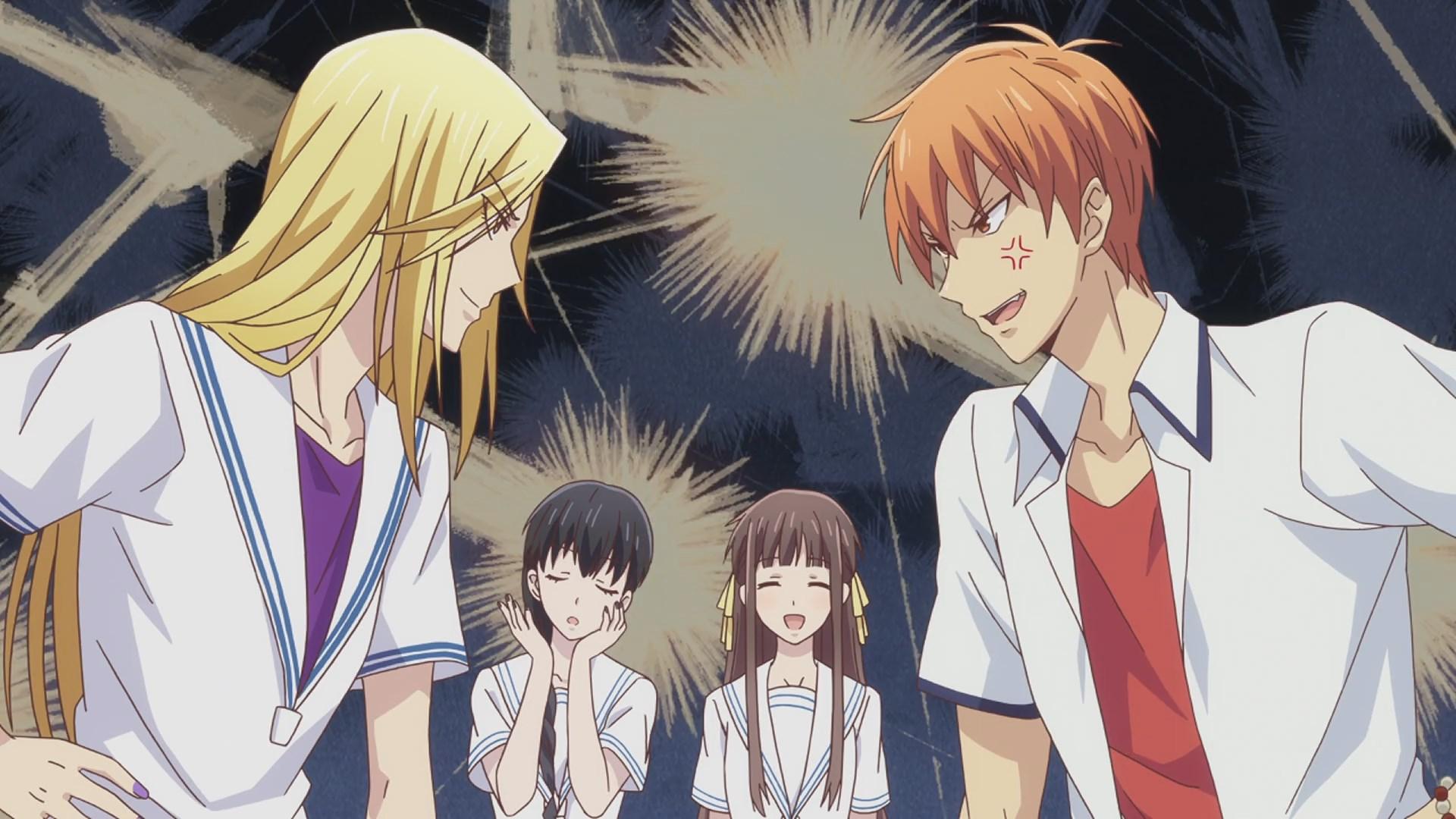 What’s more, the animal transformations barely matter past the first few episodes! There are tons of missed opportunities for wacky misunderstandings, and on the dramatic side the idea of the spirits as a “curse” is never fully explored. You’d think turning into an adorable bunny would be pretty cool, but in the world of Fruits Basket it’s treated as the worst thing that could happen to someone, resulting in them being shunned by everyone they’ve ever loved. It’s another way that Tohru’s kindness feels empty: she’s constantly praised for not being scared by something that’s obviously not scary!

Visually there’s not much to write home about. This adaptation benefits from the greater detail of modern anime production, but for my money the 2001 version had a cuter and more distinctive stylization to it. Without any experimentation with character design, motion, or color, the new visuals are watchable but instantly forgettable. 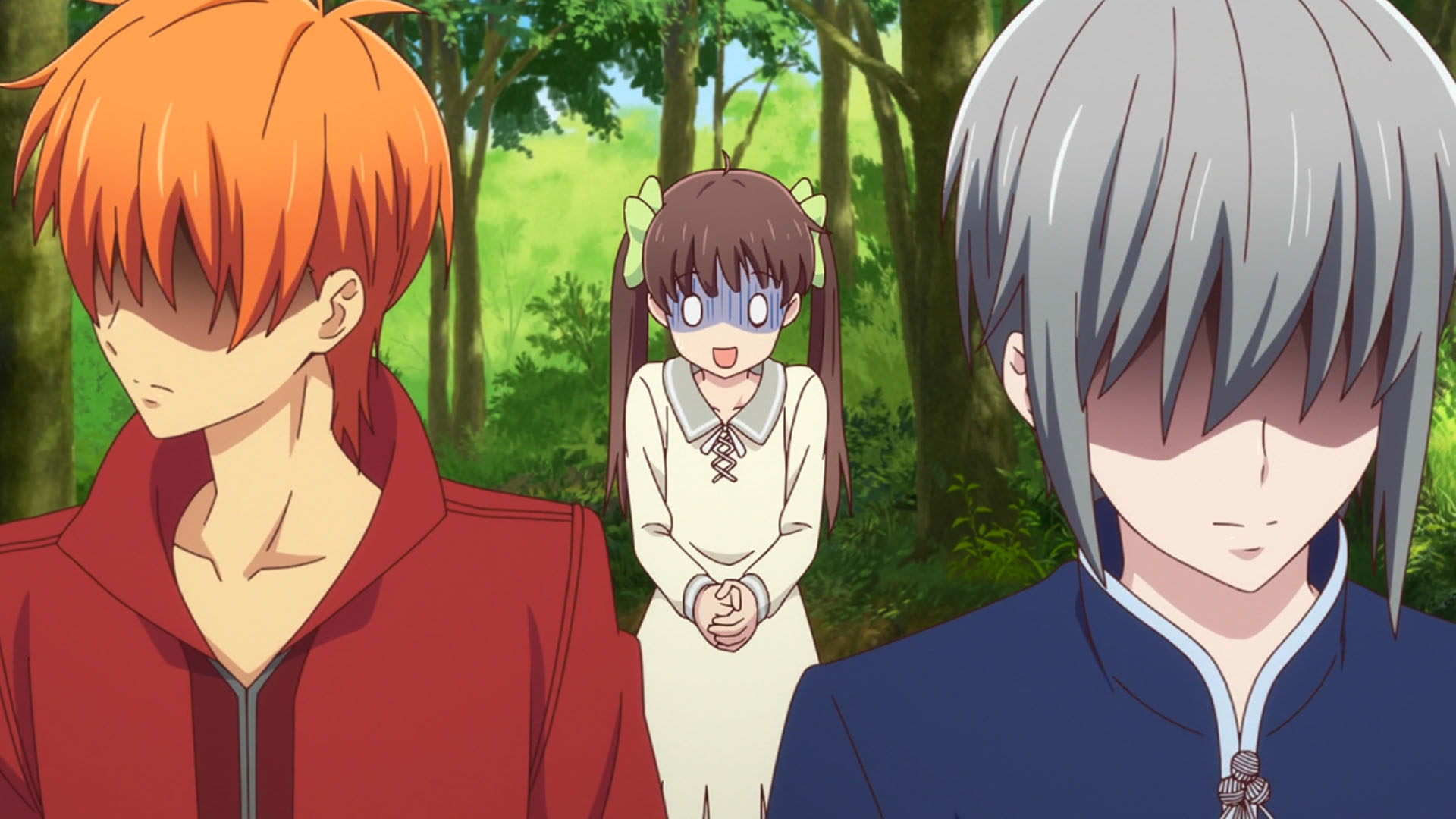 I understand that for fans of the franchise this adaptation is a big deal. It’s basically “Fruits Basket: Brotherhood,” a do-over that adapts the manga properly this time, just like the second Fullmetal Alchemist series. As a relative newbie I can’t see the appeal. With stale, stereotypical main characters, an undercooked central conflict, and a down-the-middle visual style, I’m a little surprised that the show is as popular as it is with anyone outside of the Fruits Basket faithful. Anyway, thank you to my Santa. I gave it a fair shake, but while I’m a different person than I was when I read the manga 10 years ago, Fruits Basket is still not for me.

This review is based on a streaming version on Crunchyroll.