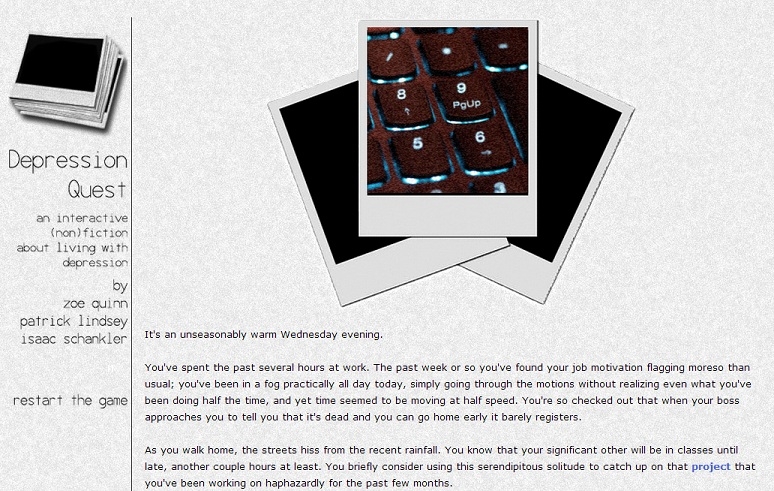 It’s useless trying to write a review of Depression Quest in a vacuum. Like it or not, Depression Quest can never go back to being a simple video game (or Not a Video Game, depending on your perspective). Now and forever, it will be known as the game that sparked one of the largest, most visible video game controversies in the history of aggrieved Internet nerds. That's a shame.

I first heard of Depression Quest, an interactive digital narrative that attempts to approximate the experience of living with depression, when angry video gamers started harassing developer Zoe Quinn on Twitter for allegedly sleeping with Kotaku blogger Nathan Grayson in order to garner positive reviews for the game. Not the best introduction to a game, but it was free on Steam so I downloaded it and gave it a try.

One of the attacks lobbed at Depression Quest has been that it’s Not A Game, and that some sort of "corruption" had to be involved for it to gather support on Steam’s Greenlight service, in which players vote for games to get them distributed on Steam. Now I’m not going to deny that it's a borderline case for the definition of video games, but seeing as there’s no hard and fast definition anyway, this really isn’t a big deal. As far as I’m concerned, visual novels are considered video games, so why not Depression Quest — effectively a digital choose-your-own-adventure? (Anybody crowing about choose-your-own-adventure novels, know that I’m also fairly comfortable labeling them “games" — though not "video games" due to the lack of video.)

The game begins with a wall of second-person prose describing your character, who has no specific gender (allowing you to imagine them as yourself) and lives a fairly unremarkable life: working at a job they hate but taking solace in their supportive girlfriend. As you move the game forward by selecting dialogue choices and courses of action (“go to the party” or “stay home”), the symptoms of clinical depression begin to manifest. Your character loses their motivation to do things they once enjoyed and begins to form an internal monologue of negativity and self-doubt.

What makes Depression Quest remarkable, though, is a simple twist in the mechanics. Like a typical choose-your-own-adventure, you get to choose how your character proceeds at each fork in the road, but a person with depression isn’t fully in control of their decisions. Sometimes the depression takes over and forces your hand. To convey this, the game crosses out choices and colors them red so you can’t select them. As more and more of the positive actions that might draw you out of your depression get crossed out, the game becomes increasingly frustrating. If only you could calmly explain things to your girlfriend, you might be able to sort things out, but the only actionable options involve desperately clinging to her while telling her about how bad a person you are. Meanwhile, background music and visual aids subtly shift to become more atonal and less colorful as the depression deepens. Depression Quest isn’t fun, but then again it’s not supposed to be.

I’ve never experienced true depression, but I went though a brief phase where I felt some of the symptoms. Luckily I was never remotely suicidal, but one thing from those few months that sticks in my mind is that smiling was physically difficult. I would put up a good face for family and friends but then drop back into exhausted ruminations the moment they were gone. Depression Quest manages to hit on one of the most fundamental feelings that drives depression: the feeling of being trapped inside your own head without any perceivable options outside of the most negative, self-destructive ones. It’s not possible to “win” in Depression Quest, and the game’s ending is appropriately inconclusive. Depression never truly ends; no matter how well you stave it off, it can always find a way back in.

Rarely have I seen a game so effectively use failure as a device for both gameplay and narrative.

You can easily finish Depression Quest in one to two hours, depending on your reading speed and how much you like to stop and think over your choices in role-playing games. It’s not a particularly rich experience, but as an experiment in “un-fun” games, it’s actually quite good. Rarely have I seen a game so effectively use failure as a device for both gameplay and narrative — usually it is only presented as a contrast to success, the dominant paradigm of video games. What’s most disappointing is that Depression Quest doesn’t go further. Imagine a game with more degrees of freedom (like, say, a point-and-click adventure) and similar mechanics that restrict your actions based on your character’s mood. The frustrating effect of depression might be made even more powerful if your character has more agency that is being arbitrarily taken away. 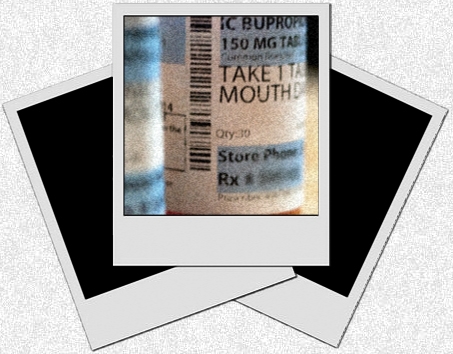 Unfortunately, it’s tough to extricate Depression Quest from the so-called “GamerGate” controversy, so lots of people will discount it as “that game that Zoe Quinn made.” The details of the harassment of a number of game designers and journalists is a topic for a different post, and if you’re curious, please read the many posts that sum it up better than I can in this review. The evidence against Quinn has been thin at best — Grayson never covered Depression Quest once they started their relationship — but regardless of any of that, her game is a great example of the potential for activist game design: games that can make us think about real issues and sometimes even help real people affected by them by putting us in the shoes of others. I don’t need to have slept with the developer to recognize smart game design when I see it.

Depression Quest is available now on Steam and the game's official website, where the developers are supporting their work with a "pay what you want" model.