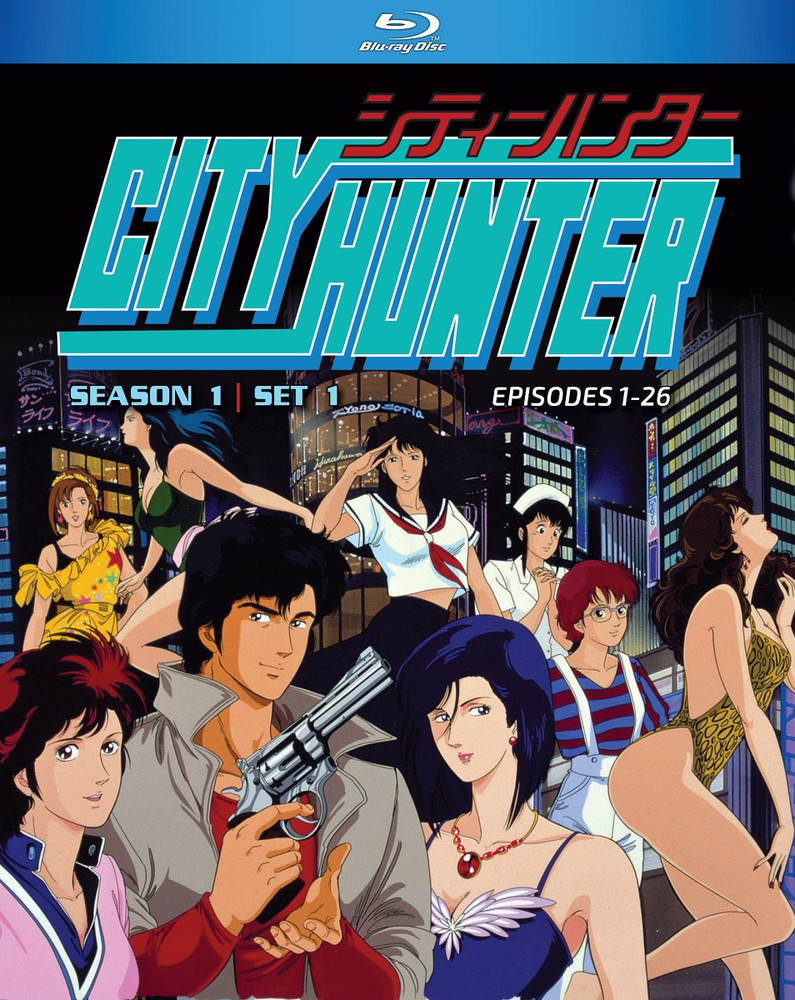 Imagine if Jack Burton from Big Trouble in Little China ran a detective agency. Imagine if, instead of being a completely incompetent idiot, he actually had the skills to back it up. And imagine if, instead of being after one girl, he was after every girl. Say hi to Ryo Saeba, a man who works as a "sweeper" — someone who helps people on the dark and vicious streets with a smile and gun.

Created in 1985 by manga artist Tsukasa Hojo, City Hunter is a seminal classic of anime. I’ve been hearing about this show since I first became an anime fan proper. The artwork seems like it wants to evoke the feel of a hardboiled detective show with gorgeous women, tense gunfights, and a hero who lays down the law but is secretly hurt from the love he lost. You know the type I’m talking about, right? Well, two out of three here. There are gunfights and gorgeous women, but there are also giant hammers, rampant punches to the hero’s face, and a main character who’s obsessed with getting laid. Wait, what? 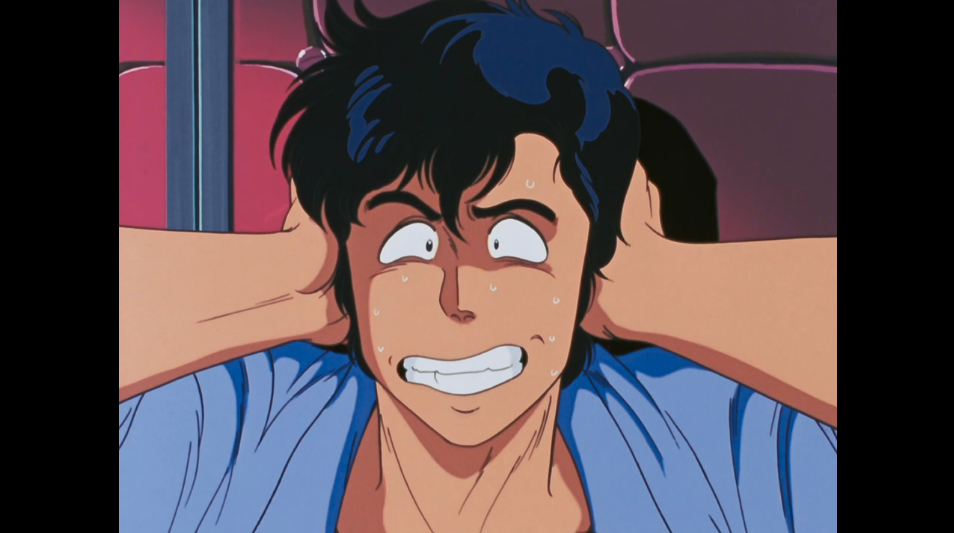 Okay, okay, so I should say that I knew somewhat about where I was headed with this show since I’d seen the live-action 1993 version, which stars Jackie Chan and was directed by Hong Kong crazy man Wong Jing. And if you've seen that too, you'll be pleased to know that that version captures some of the vibe of the anime but not nearly enough of it. Jing’s slapstick take on the story cannot compete with the joy of seeing Ryo getting trounced by Kaori with an enormous hammer because he’s been ogling some girl, or when Ryo and Kaori team up to blow a hole through warehouse walls and grab the arm of the client all the while hanging out of Ryo's red Mini Cooper, shouting at each other, and keeping the bad guys behind them. 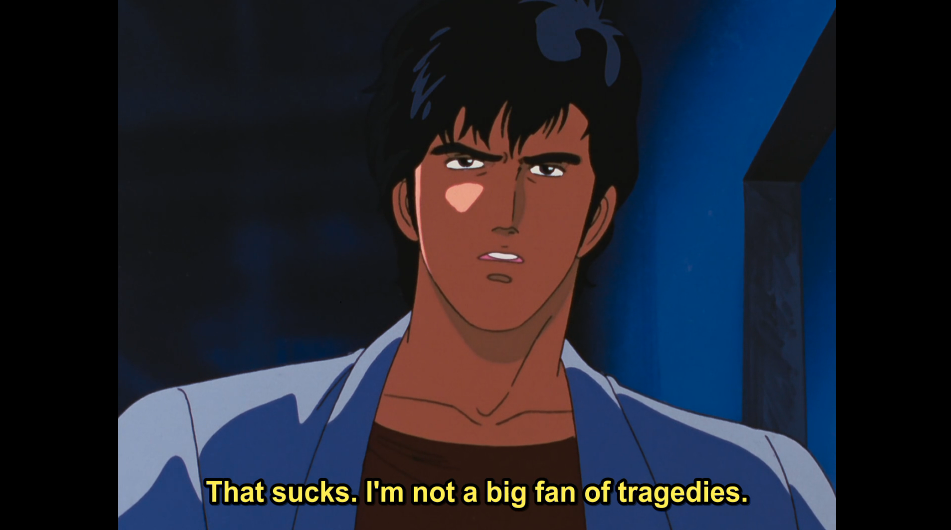 Introductions are in order. As mentioned, Ryo Saeba is a detective working in Tokyo with his friend, Hideyuki Makimura, picking up jobs from notice boards. These jobs range from escorting people safely to getting documents back for clients. Crossing one person in particular results in Makimura’s death. Ryo vows to settle the score, but he also inherits a charge: Makimura’s sister, Kaori. Although Ryo is supposed to look out for Kaori, it’s often the other way around; Kaori organises Ryo’s life since he’s a slob on an industrial scale. Ryo deals with most of his problems with a gun, but now he can also think his way out of them too. Teamed with Kaori, he helps his clients using his skills and her brains. 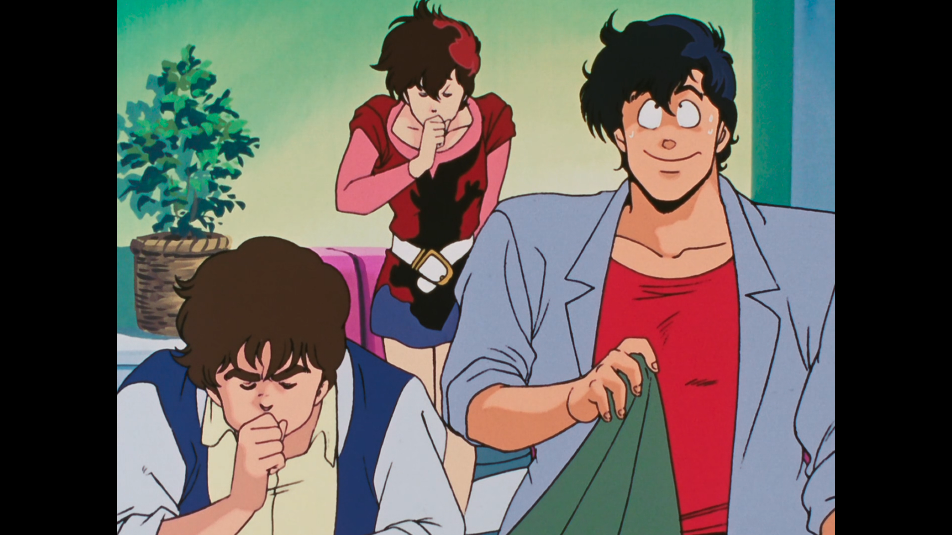 But you see, Ryo has one massive weakness: he has to chat up every pretty girl he sees in an attempt to get into their pants. His proclamation is one of needing “Mokkori!” ... and I’m sure as hell not telling you what it actually means. (Here, use this Wiktionary link.) When Ryo says this, the nearest attractive girl him needs to run. But fear not, dear readers, for Kaori is nearby to wallop Ryo.

While the ebb and flow of each episode is very standard in its execution, the show excels in throwing everything at you: mansions with James Bond-style underground levels, bazookas being used indoors, Ryo sniping at a helicopter as a girl plunges to her death hoping that Ryo shoots her. All of this stuff is par for the course in City Hunter. The genius of the show is that all of this happens concurrently with the comedic aspects; there’s no stop or pause. As Ryo and Kaori race in the streets of Tokyo in Ryo's Mini Cooper, you’ll see them handing out rounds at their quarry while Kaori shouts at Ryo for allowing the bad guys to get the drop on them. Ryo could be working with a woman who’s trying to stop a plague from getting into the wrong hands, but at the same time, he's also trying his best to sleep with her. Yet his code of honor means he only wants mature girls; he freaks out when he's asked to do bodyguard duty for a teenager. Sure, he never learns to stop listening to the Mokkori voice in his head, but Kaori is there to beat that same thought out of his head. 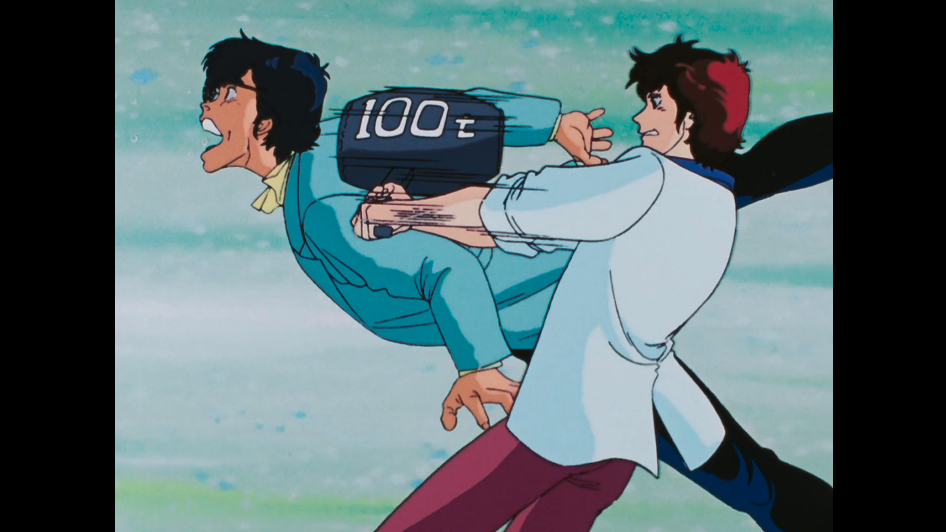 1980’s anime is replete with amazing scores and songs, and City Hunter ups the ante with some amazing tunes. I would argue, slightly, that the show’s main draw are the songs. "Ai Yo Kienaide" by Kahoru Kohirumaki belts out a catchy tune while Ryo moves around the city and girls appear at every corner. TM Network's "Get Wild" is a synthesiser-driven, aggressive toe-tapper using a sketch style ending animation of Ryo wandering the city at night. On top of that, each episode has an engaging soundtrack by Ryouichi Kuniyoshi and Tatsumi Yano. Akira Kamiya, as Ryo Saeba, plays both sides of our hero with ease and cheer. He can be serious, taking out snipers and mobsters with icy delivery, and just as easily descend into a dribbling idiot when girls walk by. Kazue Ikura, as Kaori Makimura, is grace under fire as she puts up with Ryo's crap and then has these epic meltdowns that result in Ryo being hospitalized. At the same time, she can be quiet and sensitive as she takes on goons, soldiers, clients, and Ryo when he gets serious. 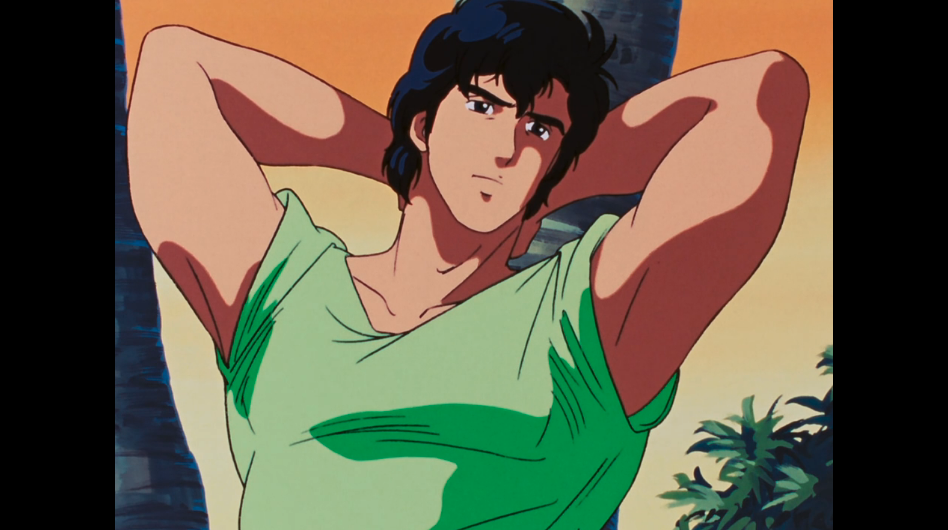 City Hunter is an anime tv series version of a Michael Bay film: all style, little substance. (That’s not a bad thing ... in this case.) Every episode of City Hunter pumps out a 1980’s Macgyver-esque mystery wherein a small section of the city blows up; Ryo says something cool, tries his luck with a girl, and gets punched by Kaori; and the credits roll — all while the animation speeds by and the music swells. It’s truly an '80s confection with power shoulders, garish fashion sense, and endless economic bubble cash flying everywhere. But I also like the little bits hidden inside the sweetness: Kaori’s reluctance to get closer to Ryo because of his womanizing, as well as Ryo’s deep emptiness in the way he throws himself at anything with a pulse and the idea that there’s a lot of pain and misery in his past. 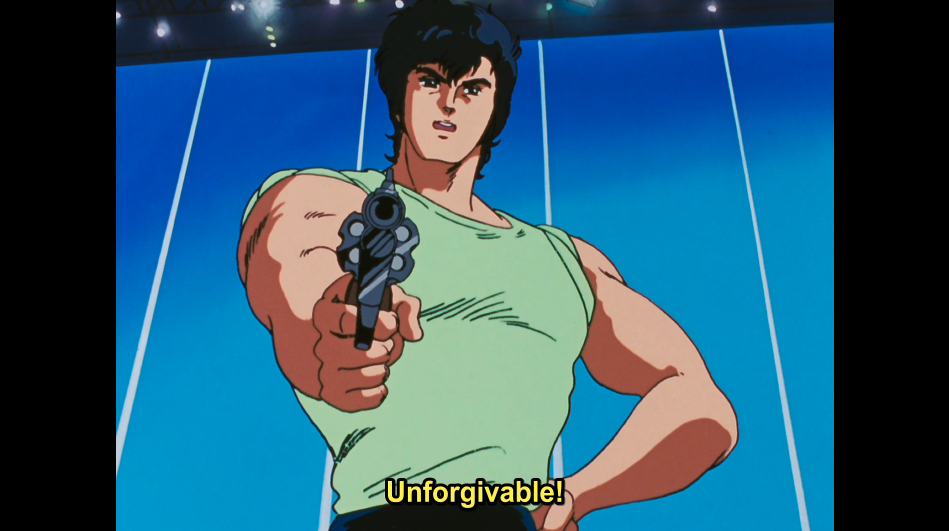 City Hunter is a particular type of retro anime. It's so cool in its delivery you could argue that how Ryo gets away with half of what he does verges on ridiculousness. But that doesn't do justice to how fun the show is when it hits its stride in each episode. Discotek licensed the entire show for release in the US. Currently, the original first season as well as the new animated film, Shinjuku Eyes, is on Blu-ray, and Crunchyroll has a lot of the episodes online for viewing. Funny and irreverent with a serious seam running underneath, it's a great title to check out while you’re trying to avoid any horrors that lurk beneath the Trap Door.