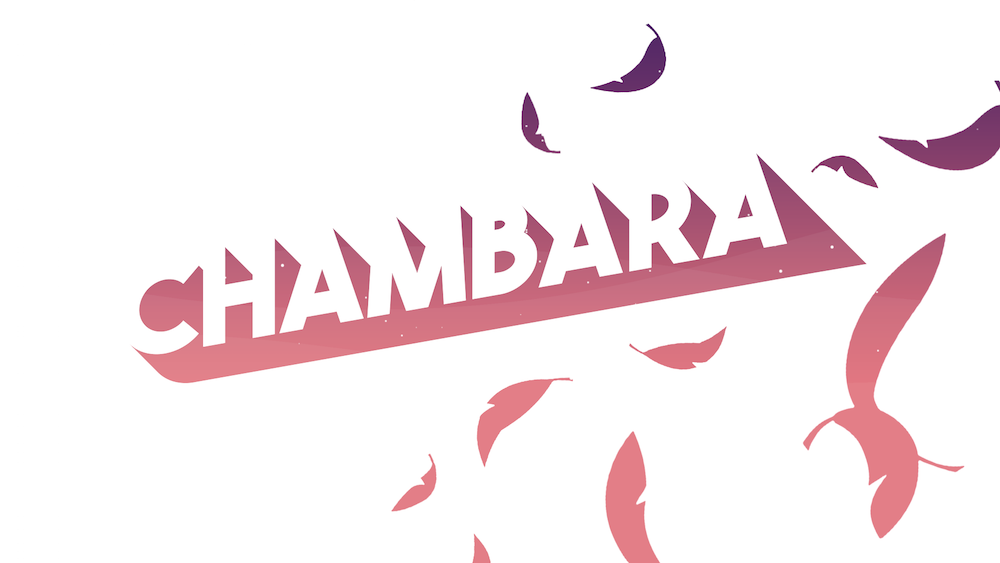 Outside of fighting games, big video game studios have mostly given up on the time-honored tradition of local multiplayer, opting instead for online versus and cooperative modes. Thankfully, indie studios have filled the hole, providing a glut of quirky games that remix mechanics from classic games to create new experiences tailored for a bunch of friends playing in the same room (Towerfall and Nidhogg, to name a few). Carrying on this new tradition is Chambara, a student game from Team OK, part of USC’s Advanced Games course. It's available now on the PS4, and will be soon on Xbox One. 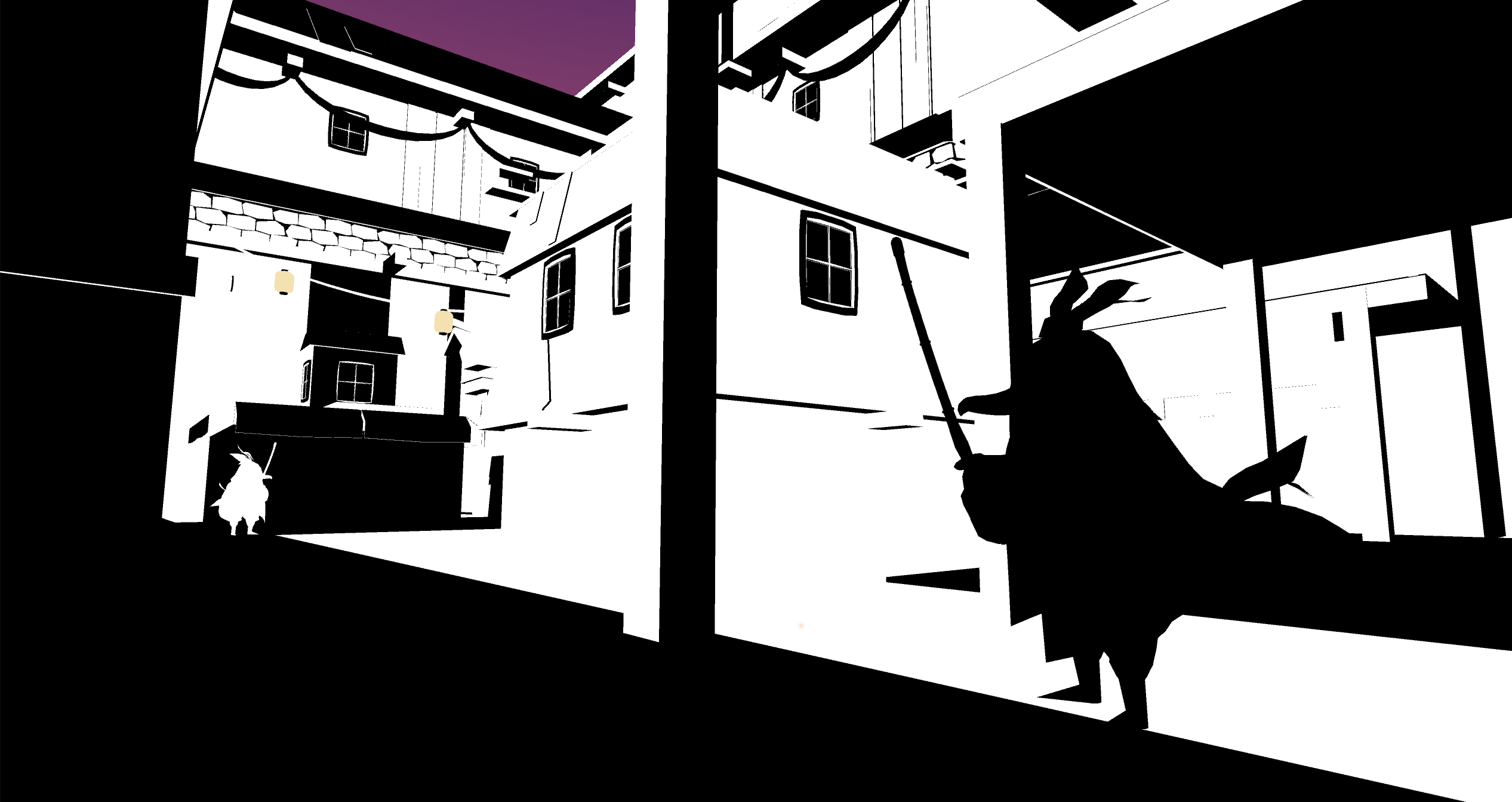 Named after the Japanese samurai film genre, Chambara is a 1v1 or 2v2 first-person arena deathmatch game featuring bird-samurai characters wielding wooden bouken swords (or a variety of alternate weapons) and shuriken. The twist is that the game only has two colors per stage, and everything, from the environmental obstacles to the characters themselves, is painted with one of the flat colors. As a result, a white character standing in front of a white wall is invisible from one angle, but sticks out like a sore thumb from another. In effect, this makes Chambara a stealth game, though it lacks any of the complex stealth systems of games like Metal Gear Solid or even Assassin’s Creed.

Players attack each other with quick melee jabs or dash attacks, all of which are one-shot kills (players have multiple lives per match). But it’s the additional abilities that really add depth to the stealth gameplay. In addition to melee attacks, you can throw shurikens at opponents. While they don’t kill their victims, shurikens stun opponents and paint them a contrasting color so they can be seen against any backdrop. When a player does die, however, they disappear in a puff of feathers that scatter on the floor and walls, which makes it harder for them to blend in against the background in that area.

The biggest twist of all, though? Chambara is inspired not just by the in-game mechanics of classic multiplayer deathmatch games, it's also inspired by a common cheating strategy. In Chambara, you’re supposed to screen-look! With a press of a button, you can “close your eyes,” effectively obscuring your screen from other players to avoid them sneaking up on you. This simple addition creates tense mind games between players as they attempt to suss out each other’s position while staying in the shadows themselves.

This cat-and-mouse game works best in 1v1 matches, in which both players spend most of the time setting up their sneak attacks before lunging at each other. Some of the best moments come when a player misses their attack, leaving them open to a counterattack as they frantically attempt to blend back into the environment. 2v2 matches are considerably more hectic, making the screen-looking and stealth mechanics a little less important. It’s a bit like the chaos at the beginning of a four-player Towerfall match, except that players continually respawn, so it never settles into a 1v1 match. That said, working with another player with the same color as you creates opportunities for coordinated attacks, and if done right, two players can orchestrate brilliant cooperative stealth strategies against their opponents.

If Chambara has one big weakness, it’s maneuverability. Characters can wall jump, but it’s a mechanic that is much easier to control in third-person platformers than first-person games. Scaling the structures in each stage is usually a pretty clumsy endeavor, and would have been much smoother had the wall jump simply been replaced with a double jump. 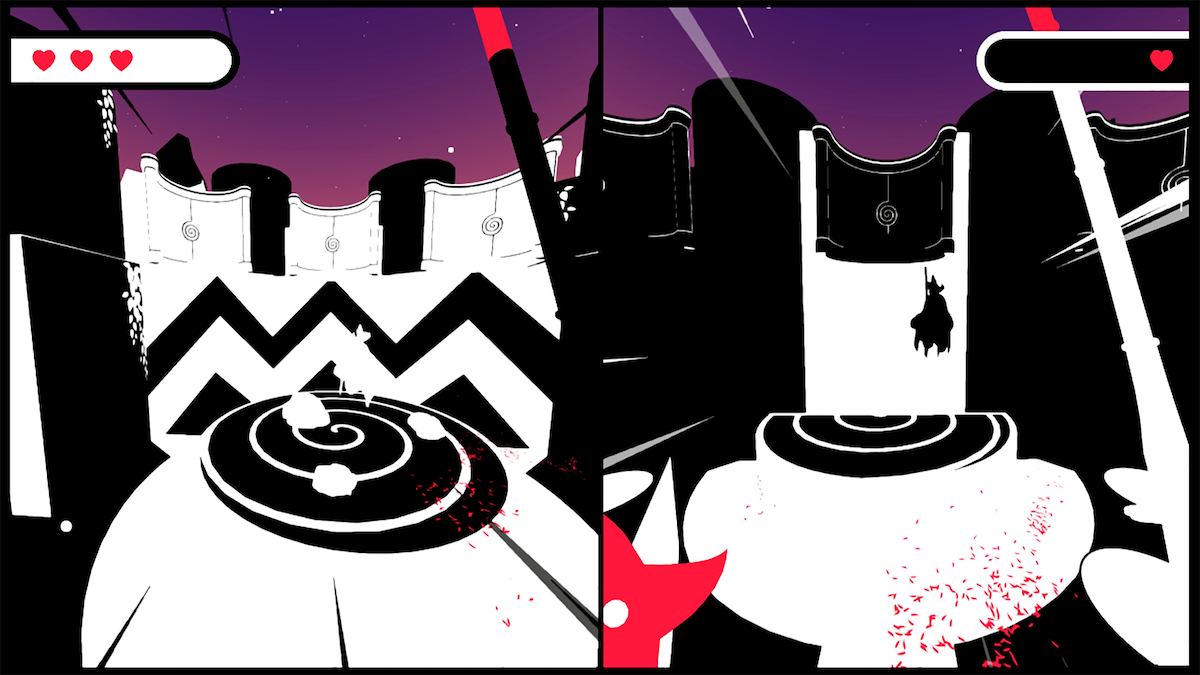 Despite a couple of hiccups, Chambara is a brilliant, simple idea that’s a ton of fun to play. There’s no online multiplayer mode, but then again, without the added depth of the screen-looking metagame, this would be a very different, much less interesting game. Chambara is proof that there’s still room for innovation in local multiplayer gaming, and that even in a world of social networks and online games, it’s still a ton of fun to plop down on a couch in front of a game and shout at your friends for a couple hours.