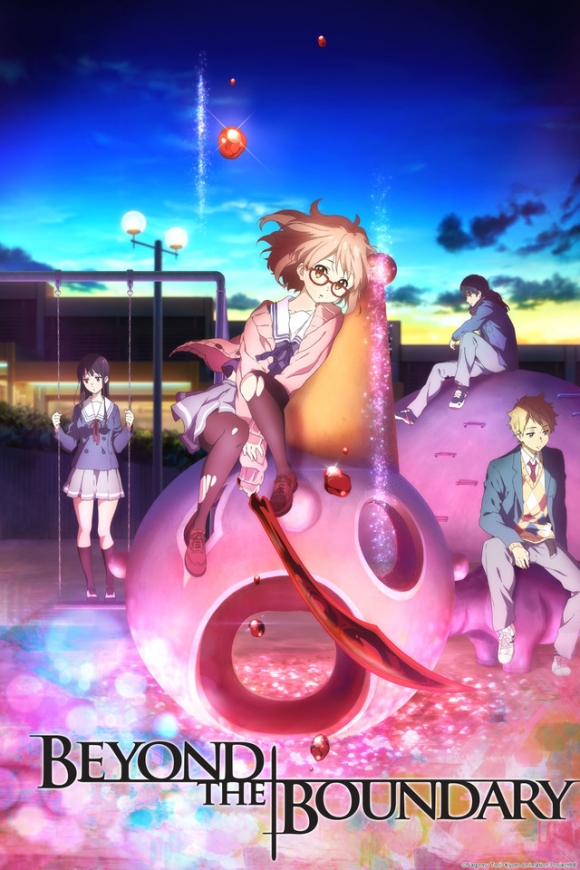 Genre-blending is hard to execute without sacrificing one of the major story elements of the contributing sources. Beyond the Boundary is a supernatural story that happens to feature school kids with a romantic subplot. Anime fans have seen this dozens of times: InuYasha, Night Wizard, Gai-Rei Zero, and Haruhi Suzumiya, and even in games like Persona. What hinders a multi-step, complicated story like this, though, is its vagueness. Beyond the Boundary’s animation is beautiful. The two main characters are complex, unique, and their tango of sarcasm and sincerity is refreshing.

This is my first time completing a light novel adaptation series where I felt cheated enough to demand the source material. For context: Spirit Warriors have flashy powers that allow them to fight youmu, monsters made of negative emotion that live side-by-side with us humans. Our main characters are both exceptions to this world. Akihito Kanbara is somehow half-youmu and regenerates like Wolverine because of it. He falls for a Spirit Warrior, Mirai Kuriyama, who is the last of her cursed, blood-manipulating clan. She spends her time trying to kill him, and he spends his time buying her meals, helping her hunt animalistic youmu and hitting on her because of his glasses fetish. 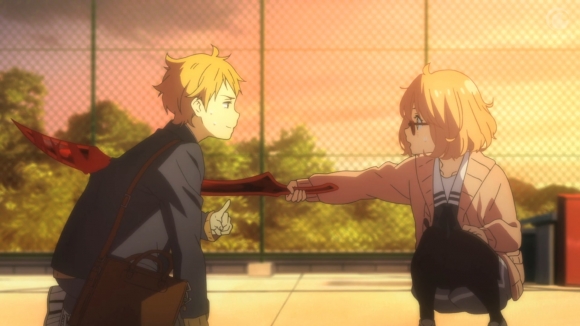 The relationship between Mirai and Akihito is built upon reciprocated self-sacrifice.

The relationship between Mirai and Akihito is built upon reciprocated self-sacrifice and leads to repetitive climactic fights in which Mirai is forced to stab Akihito through the chest. While they are both outsiders, even for this world of Spirit Warriors and Youmu, it is hard to consider them equal in their self-victimization. Akihito is handsome and wealthy (having spent the entire series paying for Mirai’s grocery bills and rent) and has friends within the Spirit Warrior Society. Granted, these friends stay close to him for preventative measures, but they still interact with him willingly. Even so, he readily feels guilty when his youmu half occasionally leaks out and, say, levels a mountain. Mirai Kuriyama, by contrast, is adorably tiny, clumsy, and dirt poor, has messy hair, and wears a giant, hand-me-down sweater. Her powers also keep her on a tight leash held by the Nase family, the most powerful lineage of Spirit Warriors in the city. One of these characters is clearly better off than the other. 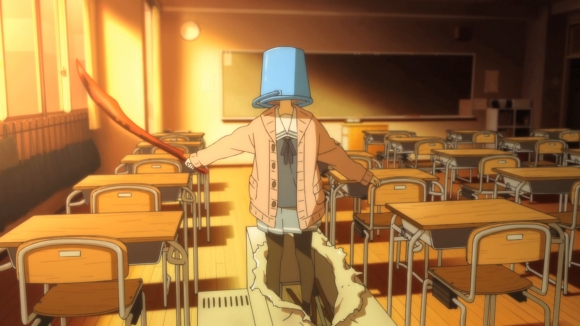 They have a quaint cat-and-mouse dynamic but follow the Japanese stereotype of mutually lonely teenagers. Kuriyama cuts Akihito for his glasses fetish, calling out every instance as “unpleasant,” as often she physically cuts into him with her blood sword. Akihito is content to take the hits if it means keeping tabs on her. It is a very thin line between endearment and stalking, but that’s anime for you. 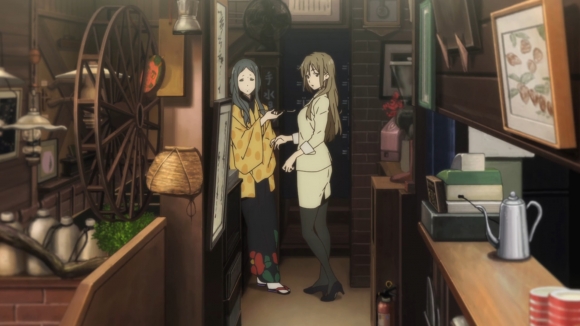 Too often the supporting cast of this show is portrayed as curt, stone-faced, and dismissible. Izumi Nase, Ayaka, and Sakura, three pivotal characters in Kuriyama’s development as a person and plot point, are practically identical. My first time watching the show I completely dismissed them due to the monotony of all their scenes. It doesn’t help that nearly every woman in this series has black hair and dark eyes and delivers plot-heavy, Cristopher-Nolan-Batman (deadpan, monotone, devoid of characterization) dialogue. Mitsuki Nase, one of the core characters, almost falls into this trap as well, and she would be just as flat were it not for her relationship of dismissive harassment with her brother, Miroku.

It is the side characters that take Beyond the Boundary off the interesting side roads and onto the highways of cliché. The badass and silent eldest sister. The quiet assassin. The smiling villain who takes everything too lightly. What the show does uniquely is so complicated, however, it loses its charm quickly. Beyond the Boundary has a great Catch-22 betrayal story underneath its surface and imaginative world-building monsters. You just won’t recognize it your first time through. 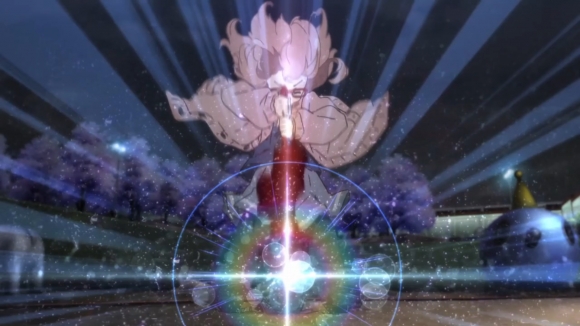 What this series screams is “I am AMV fodder!” Aggressively fluid fight scenes combined with a psychedelic barrage of colorful special effects put Beyond the Boundary on par with Gargantia for effective visuals. Still, it’s encouraging that Mirai and Akihito can admit and accept their relationship while continuously falling in and out of Silent Hill-esque parallel universes composed of city-sized youmu. They end up trading the position of Spirit Warrior scapegoat back and forth until they trust each other enough to stand side-by-side in the face of their past sins. The schematics are confusing, but at least the emotional drive is rewarding if only bittersweet. 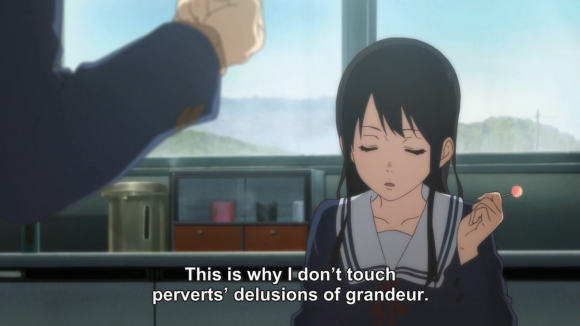 Compared to other shows this season, Beyond the Boundary’s fanservice is tame, but Akihito’s glasses fetish and Hiromi’s disturbing “little sister” fetish are exploited far too often. The series may also run into the censorship scab with Mirai’s powers of blood manipulation. Granted, the blood is colored strangely, and most of the youmu slaying fizzles out with the youmu turning into a stone, but there is still a lot of blood and it only comes out of borderline Lolita-sized Kuriyama.

I do not hesitate to recommend Beyond the Boundary, but it's not a gateway anime series.

Perhaps that is the double-sided blood sword of this series: we lose yellow and blue but, in their collision, we get green. I do not hesitate to recommend Beyond the Boundary, but I do warn that it is not a gateway anime series. Still, a lot of action, a vague romance, and visuals on par with the Fate series make this a decent experience.

For more insight into Beyond the Boundary, check out this episode of Uncle Yo's We Are the Geek podcast.