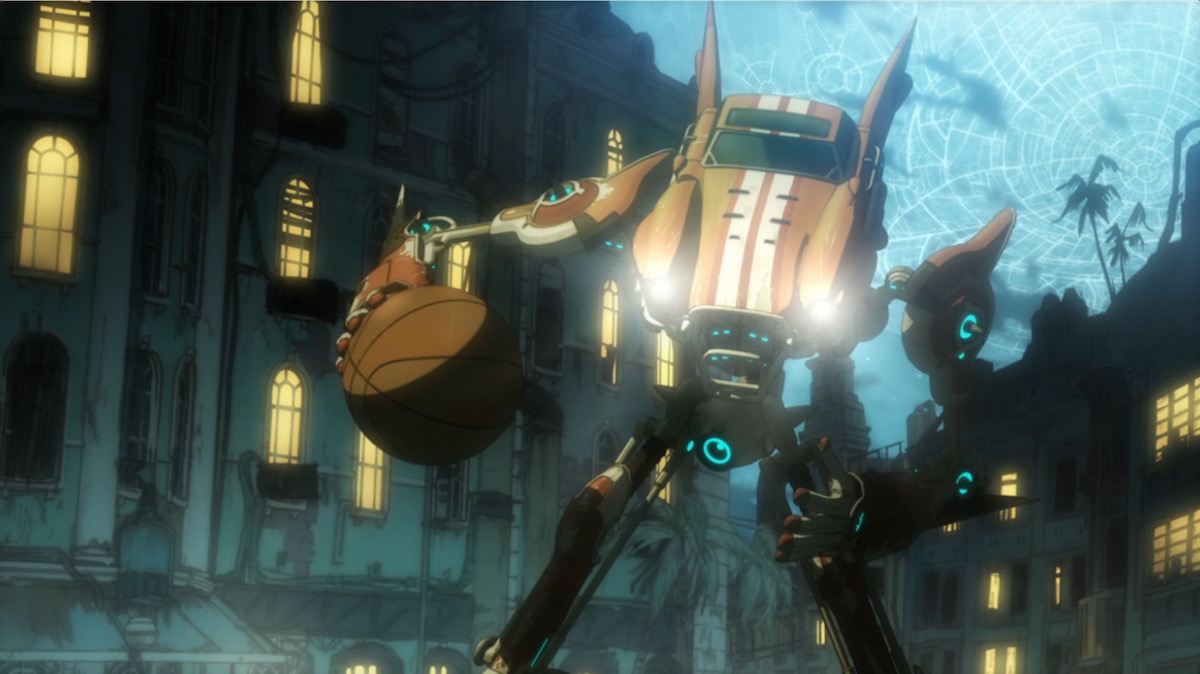 Giant robots playing basketball? Put me in, coach! Basquash is a show with a killer premise that garnered lots of buzz when it came out in 2009. At the time, I watched one episode then put it on hold, but this year‘s Secret Santa recommendation pushed me to finally give it another try.

On the planet Earthdash, all anyone seems to talk about is basketball. In this world, pro players have taken the game to the next level via giant robots called Bigfoots. Young street basketball player Dan JD moonlights as the vigilante Dunk Mask, vandalizing the official Bigfoot Basketball League as retribution for a Bigfoot accident that cost his little sister her legs. That is, until a showy attack on the league lands him in jail and inspires other players to take the sport back to the streets. Before long Dan has put aside his Bigfoot grudge and joined their ranks, competing against a motley cast of rivals for the vaunted title of “legend.” 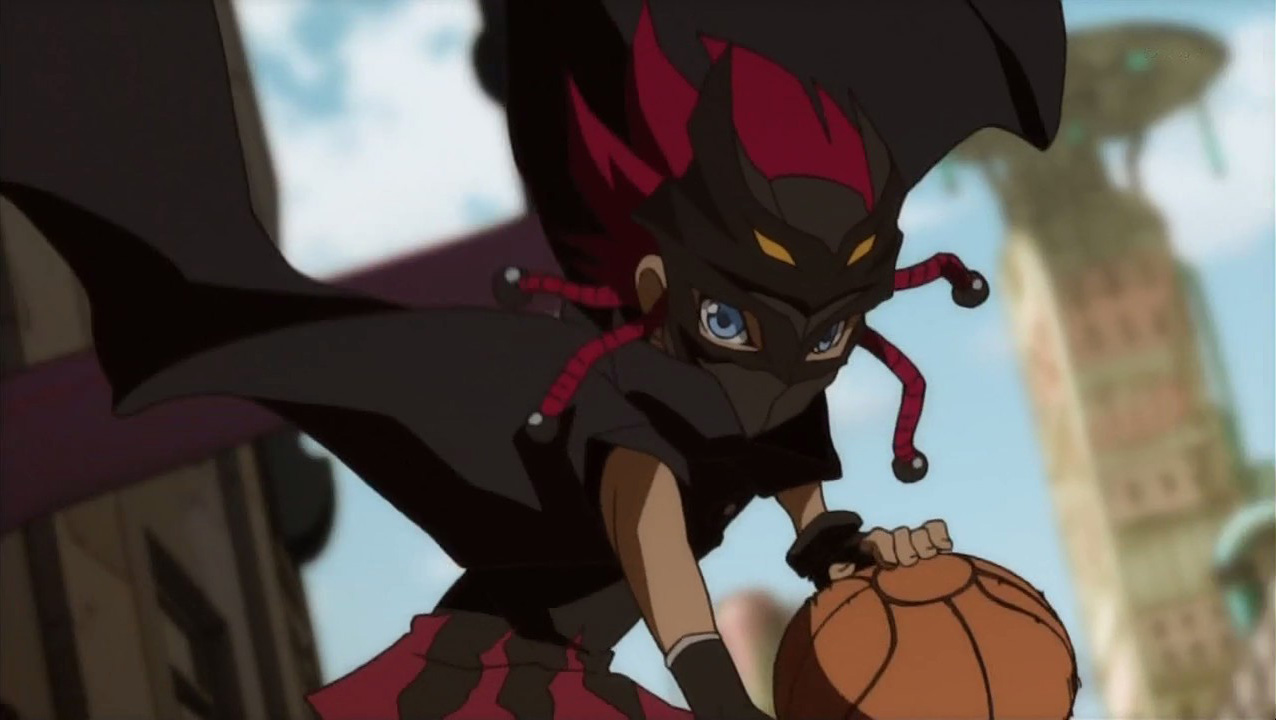 Ah, Basquash. What could have been. Co-created by Shoji Kawamori (Macross) and French designer Thomas Romain (Oban Star Racers), produced at Kawamori’s studio Satelight, and directed by Tengen Toppa Gurren Lagann alum Shin Itagaki, Basquash was the product of a melting pot of talented creators. What’s more, while other creators fused elements of mecha and sports in the past (Gunbuster, for instance), no one had committed to such an ambitious genre crossover. It had the makings of a crossover hit.

There are reams of fan theories about what went wrong during the production, many of them spurious. What is clear is that Itagaki wasn’t involved after episode 10 or so, and that Basquash’s first few episodes feel like a different show from its final ones. 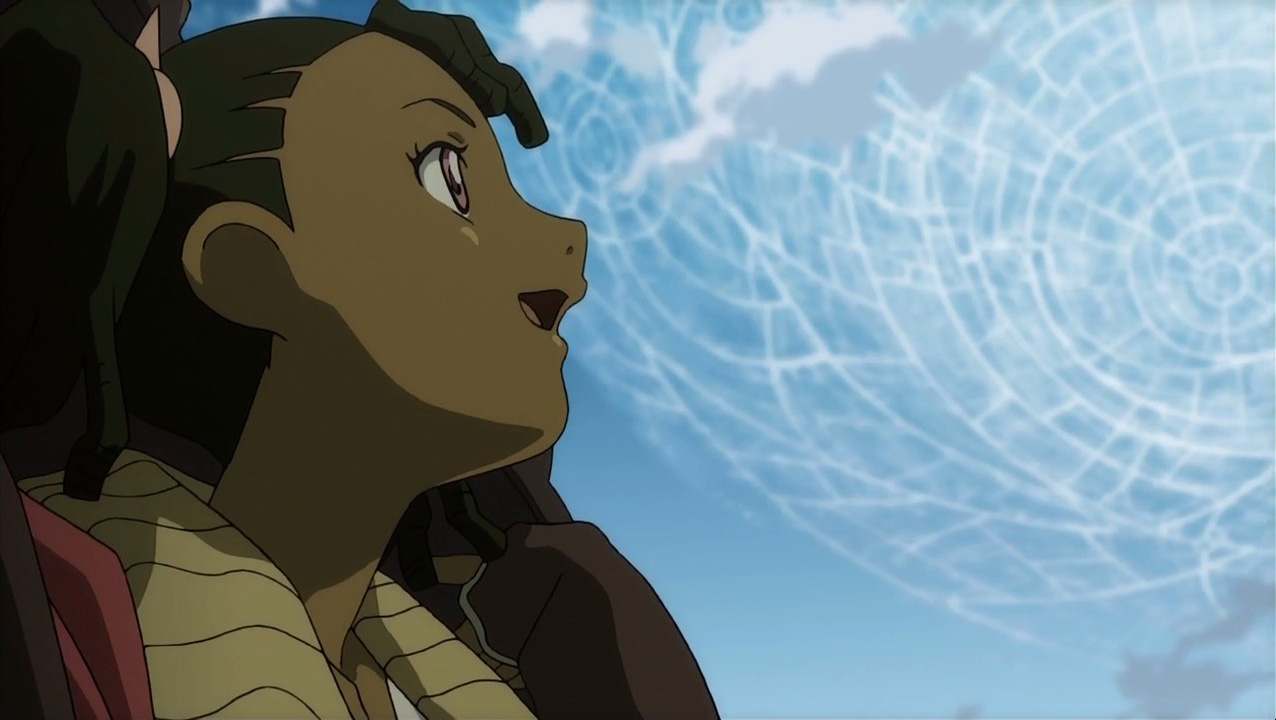 The Bigfoots — effectively old-school sports cars with arms and legs — have the same goofy, lopsided charm that Romain put to use years later in Space Dandy.

Early episodes lean heavily on sports conventions. Dan’s a hot-headed upstart challenging the best of the best with flashy, unpolished moves. Many players have specialties: Dan is all about dunking, while the brooding Iceman Hotti (what a name!) focuses on dangerous, high-speed passes. The players upgrade their Bigfoots over the course of the story to improve traction, handling, and more — one of a few mecha conventions that make it in. More curious is the inclusion of shape-shifting familiars that tag along with players but go entirely unexplained. Dan’s companion, Spankey, is a devious little shit and one of the funnier characters in the show.

Visually there’s lots to love. The run-down towns of Earthdash feel like cousins to Tekkon Kinkreet’s cityscapes, while the character designs feature bright splashes of color and cartoonishly exaggerated proportions. The Bigfoots — effectively old-school sports cars with arms and legs — have the same goofy, lopsided charm that Romain put to use years later in Space Dandy. Plus they literally wear Nike sneakers thanks to a hilariously conspicuous sponsorship deal with the shoemaker. Itagaki’s directing is all energy and motion, taking clear cues from Hiroyuki Imaishi. However, it’s the surrounding polish that grants Basquash its sense of cool: a kick-ass soundtrack nearly from top to bottom, graffiti-style type scrawled across the title cards, and scene transitions in the form of basketballs that smash into the screen. 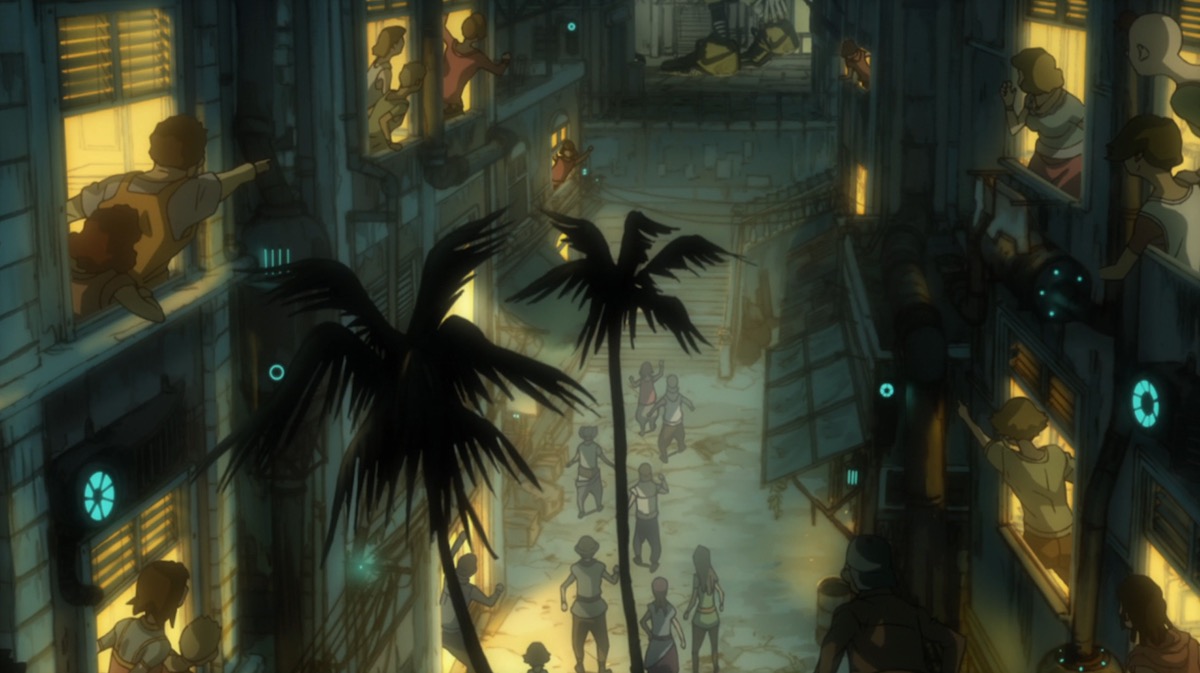 For a show ostensibly about playing basketball in giant robots, there’s not nearly enough ... basketball.

Less cool is the unrepentant horniness. Itagaki’s episodes are full of ogling shots of women’s bodies. Dan’s manager sports a “lunar bust,” which is to say absurdly massive boobs as a result of the moon’s low gravity. It’s all unnecessary and played for cheap laughs. When director Hidekazu Sato takes over for Itagaki, he largely jettisons those elements, but with them go Itagaki’s energetic pacing. (He was the guy who went on to direct Teekyu after all.)

Even before Itagaki’s unceremonious departure, the story feels strangely unfocused. For a show ostensibly about playing basketball in giant robots, there’s not nearly enough ... basketball. There are episodes where barely anybody even picks up a ball, and when they do the rules and stakes of each match-up are often unclear. At one point, the series graduates its obligatory idol group to a full-fledged basketball team then expands their role until they crowd out most of Dan’s teammates. It’s one of many examples of mixing and matching anime tropes that feels like the result of too many cooks in the kitchen. The episodes that lean into traditional sports storytelling and explore the human drama of teamwork and competition are some of the most compelling in the series!

Instead of capitalizing on that, Basquash’s finale rejects the idea of competing and winning in favor of integrating basketball into its nonsensical in-universe cosmology. It’s as if series writer Tatsuo Sato got bored with all the basketball and tried to make the show about something else. Sato would go on to direct and write adapted scripts for another Satelight production, Bodacious Space Pirates, with a similar problem: a faux-conflict that consists largely of characters play-acting another genre (in that case, space opera). 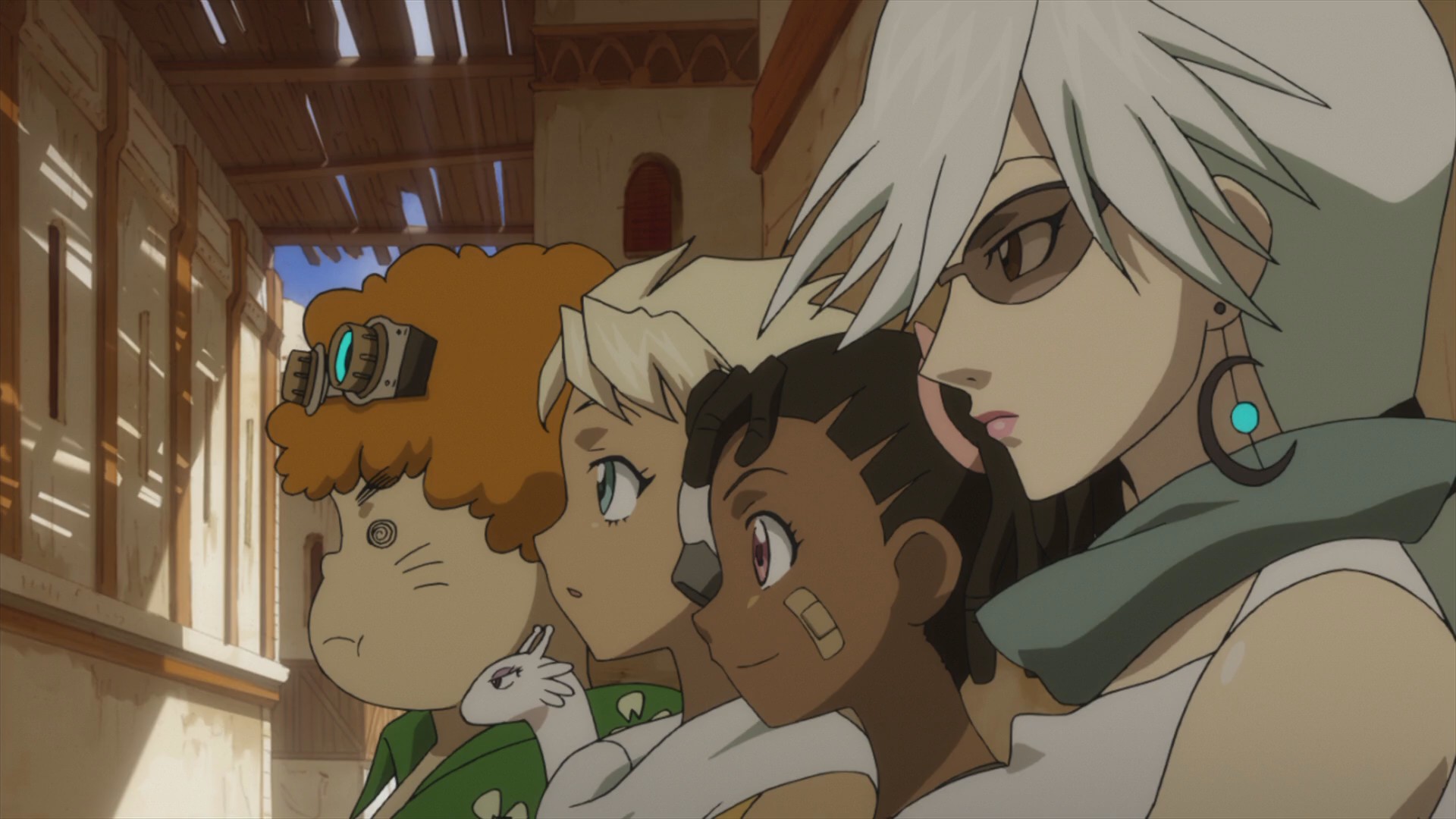 When the dust settles and the heroes have used the power of basketball (fine, whatever) to save the world, there’s no time to wrap up the story’s many loose ends. Dan’s teammates get a line or two to say what they’ve learned, but his strained relationship with his sister — originally his motivation for playing basketball — is ignored. Even his tacked-on romance with one of the idols doesn’t get a satisfactory resolution after receiving inordinate attention in earlier episodes.

Watching Basquash was a real bummer. The early episodes offer a glimpse of the brash, cartoony genre fusion we could have had. It never again reaches that high, though there was more than enough eye candy to keep me engaged until the end. Thanks to my Secret Santa for the recommendation, even though it didn’t turn out to be the slam dunk you hoped for.

This review is based on a VRV stream provided by HIDIVE.