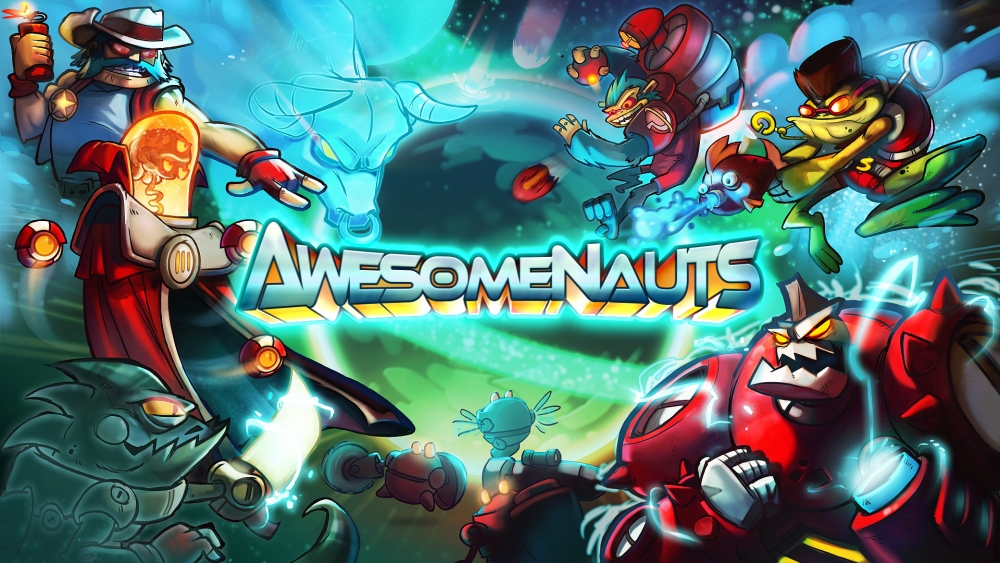 Video game genre designations can get pretty silly, with ridiculous descriptions like "rogue-like-like" and "FPS/MMORPG." Of course, it doesn't help that gamers have adopted some of the most arcane, unpronounceable acronyms to talk about their favorite genres. Regretfully, my newest timesink is part of the problem. The elevator pitch for AwesomeNauts starts with "It's a platformer that's also a MOBA" and ends with the other person getting off at the next floor and taking the stairs. But despite an unexpected mashup of genres and a title that sounds like a five-year-old came up with it, AwesomeNauts is actually a rewarding and genuinely exciting video game.

The elevator pitch for AwesomeNauts starts with "It's a platformer that's also a MOBA."

Before going any further, though, let's sort out that nasty acronym. For those of you unaware (which should be approximately none of you considering my audience), the slightly cumbersome acronym MOBA stands for "Multiplayer Online Battle Arena." You may know it better as "the League of Legends genre." In a MOBA, players take on the role of a special "hero" character in a small team (usually 3-5 players) and try to make their way along narrow "lanes" in the map to the enemy's base to destroy it. There are towers that they have to defeat along the way, and both sides have computer-controlled soldiers that march toward the enemy base and fight each other. The tide of battle depends on each side using their abilities to breach holes in their opponents' defenses and break into the base. The whole thing plays a little bit like a real-time strategy, but with more twitch-based action and less unit and resource management. 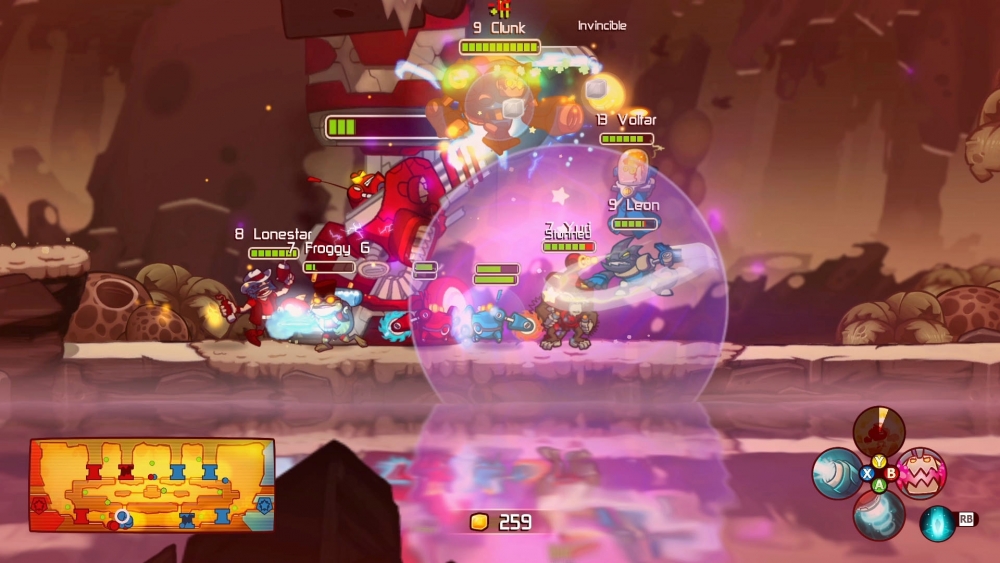 AwesomeNauts takes this idea and mixes it with the tried-and-true platformer, very appropriate for me as a first-time MOBA player and longtime platformer fan. You play as "AwesomeNauts," space mercenaries fighting a proxy war between two opposing armies, and it's your job to support your endless stream of droid forces as they seek to break through the opponent's turrets. A nice consequence of the platformer mechanics is that the game becomes somewhat more linear. Your droids are stuck to the floor, so when the two sides meet, they stop and fight each other. This gives the map the appearance of a chess game with pawns sitting face to face and provides a clear view of the battle lines. On the other hand, the maps are surprisingly varied; there are different numbers of lanes and optional paths, so you may often be forced to change tactics depending on location.

The variety of characters brings with it a focus on specialization and team dynamics, adding a strong element of strategy to all the chaos.

However, the most striking tactical variety comes from the 15 playable characters, who provide a number of different ways to hasten the destruction of your opponent's base. Some characters are designed to get in quick and kill other AwesomeNauts, some are best at floating above the battle and harassing opponents, and others can lay traps or heal. This variety brings with it a focus on specialization and team dynamics, adding a strong element of strategy to all the chaos. 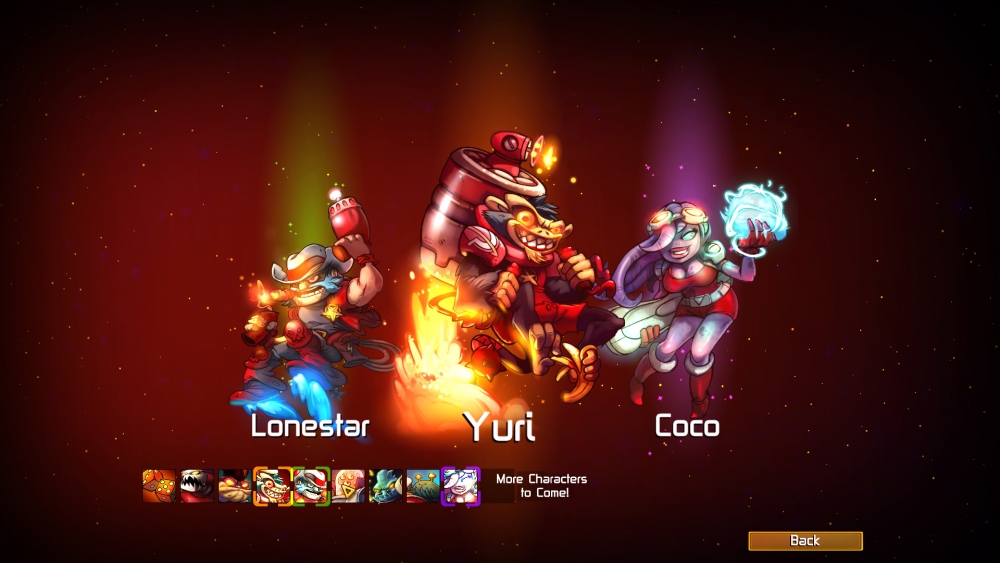 Unfortunately for hardcore MOBA players, AwesomeNauts doesn't seem to be very well-suited for competitive play (though I'm hardly the expert on such things). Fights usually aren't highly technical competitions between skilled players. Instead, they're more like a test of who can jam on one button fast enough to knock the other guy's health down. This is absurdly fun, of course, but not what I consider the height of competitive gaming. I would say AwesomeNauts is to "real" MOBAs what Super Smash Bros. is to "real" fighting games (simpler and more fun because of it), but there's a whole army of nerds out there who will fight me for considering Smash Bros. "not a real fighting game." Plus AwesomeNauts has built up a modest competitive league since it came out last summer, so hey, maybe as a genre newbie I'm just not seeing the potential here. 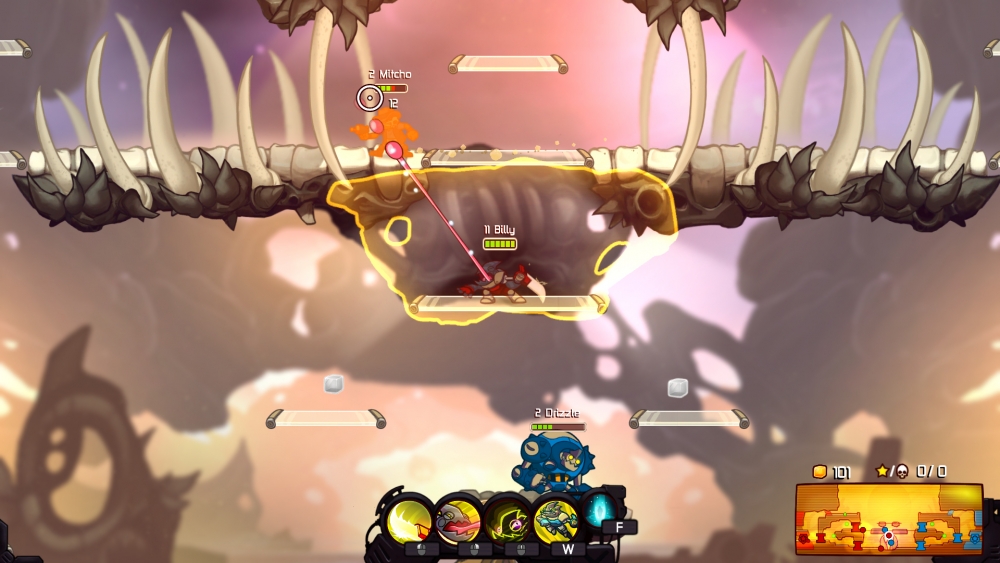 By far, the most polished thing in AwesomeNauts is its presentation. The game is pure Saturday morning cartoon cheese, with an imaginative cast of high-tech aliens and animals, a bombastic soundtrack chock full of wonderful character theme songs, and bright, cartoonish 2-D visuals. When the frog rapper character named Froggy G fires a shot from his fish-shaped pistol and destroys the enemy base, I dare you to not crack a smile at the exuberant narrator's cry of "VVVVICTORY!" Heck, there's a squid who shoots a space anchor and his name is Admiral Swiggins! I couldn't have asked for a more perfect antithesis to the overwrought grittiness of so many modern video games.

AwesomeNauts is a fast-paced multiplayer action game that's easy to pick up and ridiculously fun to play.

AwesomeNauts is a great introduction to MOBAs; it combines a new genre with a classic one, and avoids the hyper-technical gameplay and stats-crunching that some MOBAs encourage. The result is a fast-paced multiplayer action game that's easy to pick up and ridiculously fun to play. I had never played a MOBA before buying AwesomeNauts through a Humble Indie Bundle, and after about 15 hours with the game, I'm actually pretty interested in the genre. (I'm also interested in a new genre name that doesn't sound like a government agency, but that's besides the point.) If you're not into MOBAs at all, this probably isn't up your alley since all the main mechanics are faithful to the genre, but if you have even a passing interest, AwesomeNauts could be just the gateway drug to get you hooked ... for better or for worse. 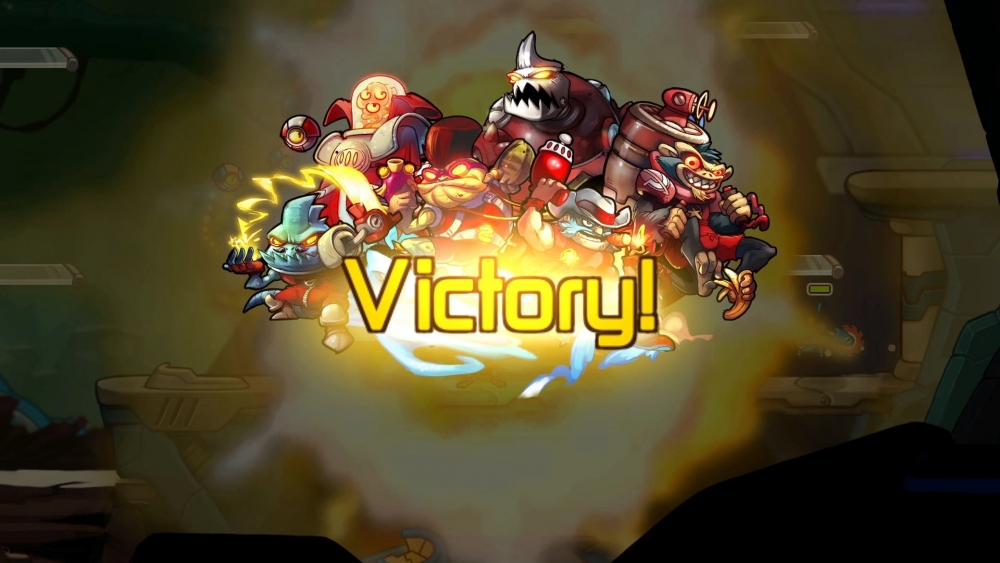 AwesomeNauts is available on Steam for Mac and PC, on Xbox Live Arcade, and on Ronimo Games' official site.

This review is based on a digital copy for Mac OS purchased through the Humble Indie Bundle.