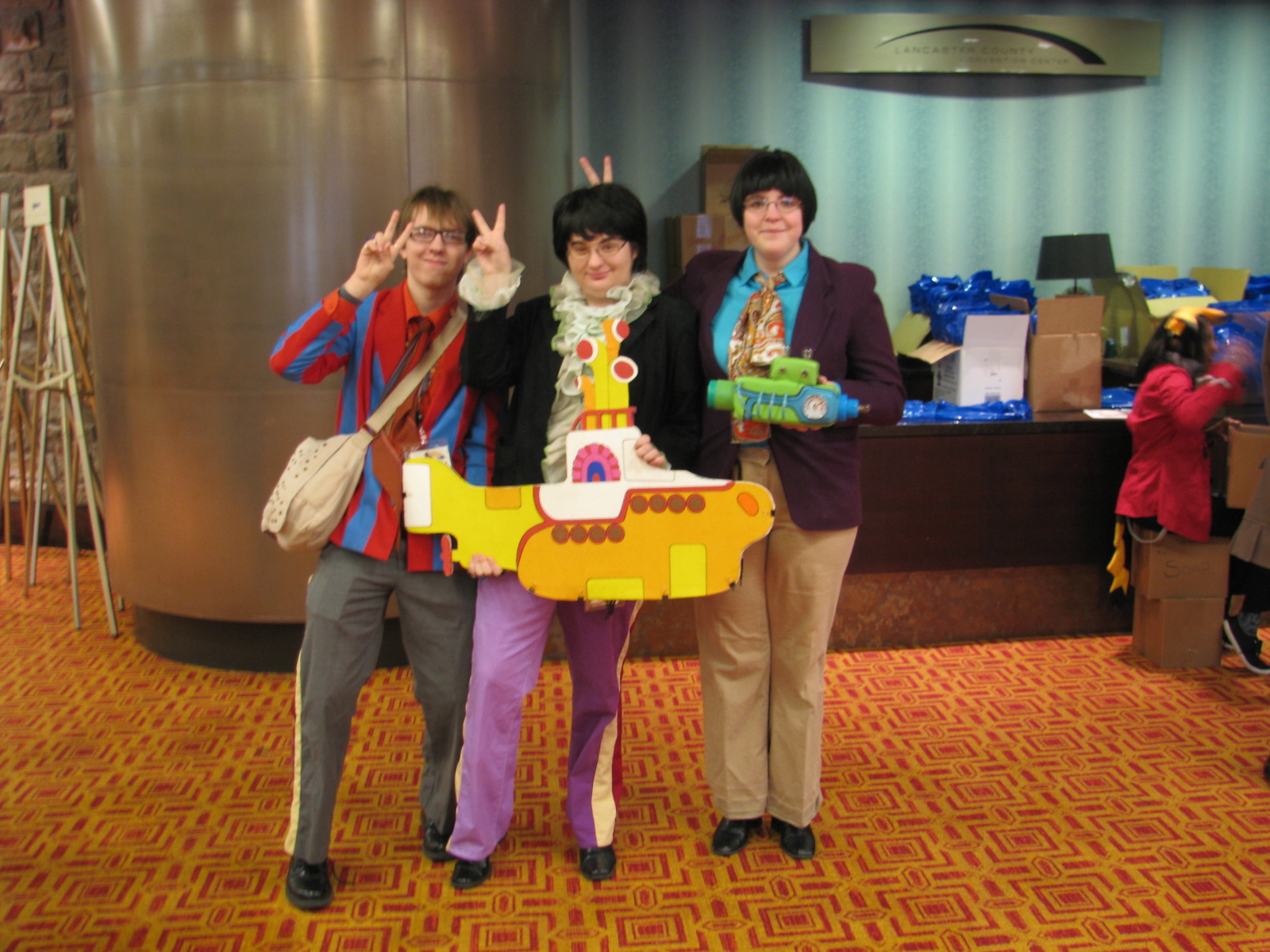 An explosion in attendees marked Zenkaikon’s third year in Lancaster, PA. With 4,800+ paid memberships (5,000+ warm bodies) accounted for, con attendance grew 20% over last year and evidently accounted for over 10% of the overall population of the host county! But people weren’t the only thing Zenkaikon brought to Lancaster. The con, true to its mission statement, also brought “knowledge and enjoyment of Japanese art, animation, and culture;” sci-fi; and more via … a “Victorian and Edwardian England” theme … represented by a top-hatted octopus and conservatively dressed elves? Quite. Quite. 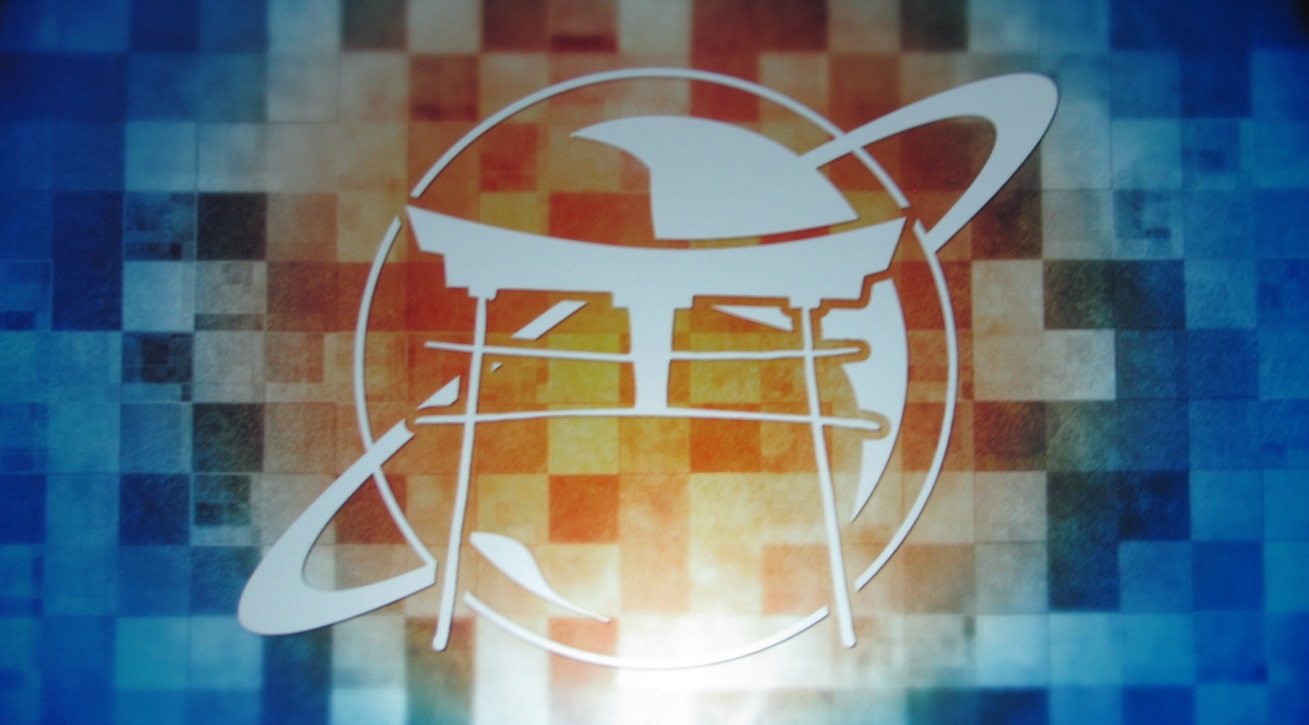 Despite the numbers, navigation throughout the spacious Lancaster County Convention Center felt unencumbered … until Saturday night. Lines for later-evening programming congested the upper hallways like the plaque threatening so many attendees’ arteries. (There’s a deliciously evil farmer’s market right beside the con; don’t pretend you have no clue as to what I mean.) But that’s earnestly where my own inconveniences/grievances end. Even then, staff promptly tried to handle congestion using stern line management. There were simply too many people descending upon the same areas of interest for the building to handle. 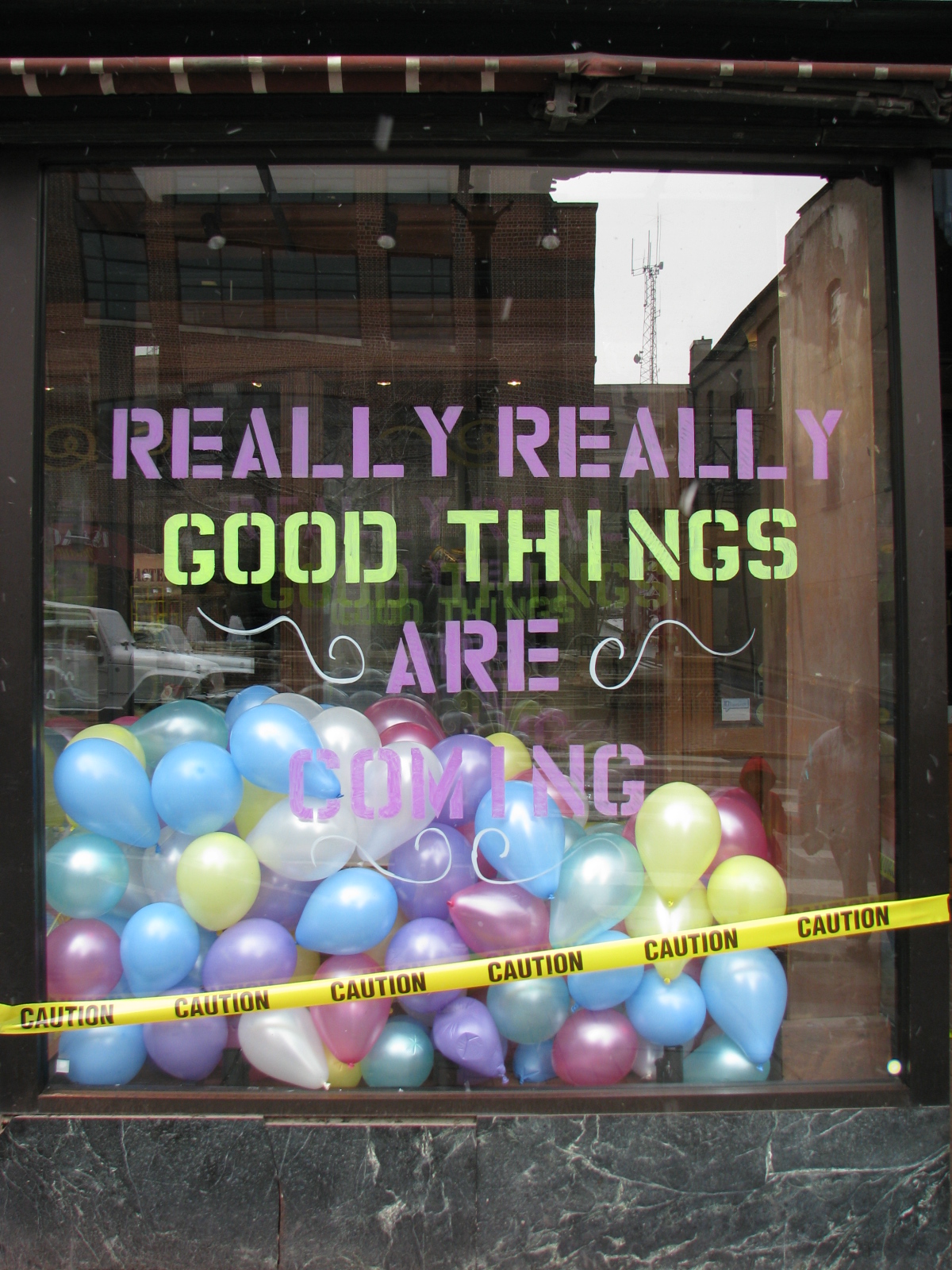 Because of its inclusiveness, guests, and even venue layout, Zenkaikon felt a lot like a proto- ConnectiCon this year. That is to say Zenkaikon made the transition, at least in my mind, from local (albeit reallocated) con to a formidable, mid-sized destination con. Hell, even two of the guests thought themselves large enough presences to charge for autographs. Zenkaikon’s particular draw, however, is difficult to explain.

It’s a con of convergence, where geeks from all walks of fandom assemble and mingle, and the rural PA locale is as charming as it is comfortably isolating. The quaint town surrounding the con center offers a wealth of independent eateries and shoppes (not to mention the three craft beer bars within a literal stone’s throw of the con hotel). Yet this year’s programming proved a magnetic force that curtailed even the briefest outings. 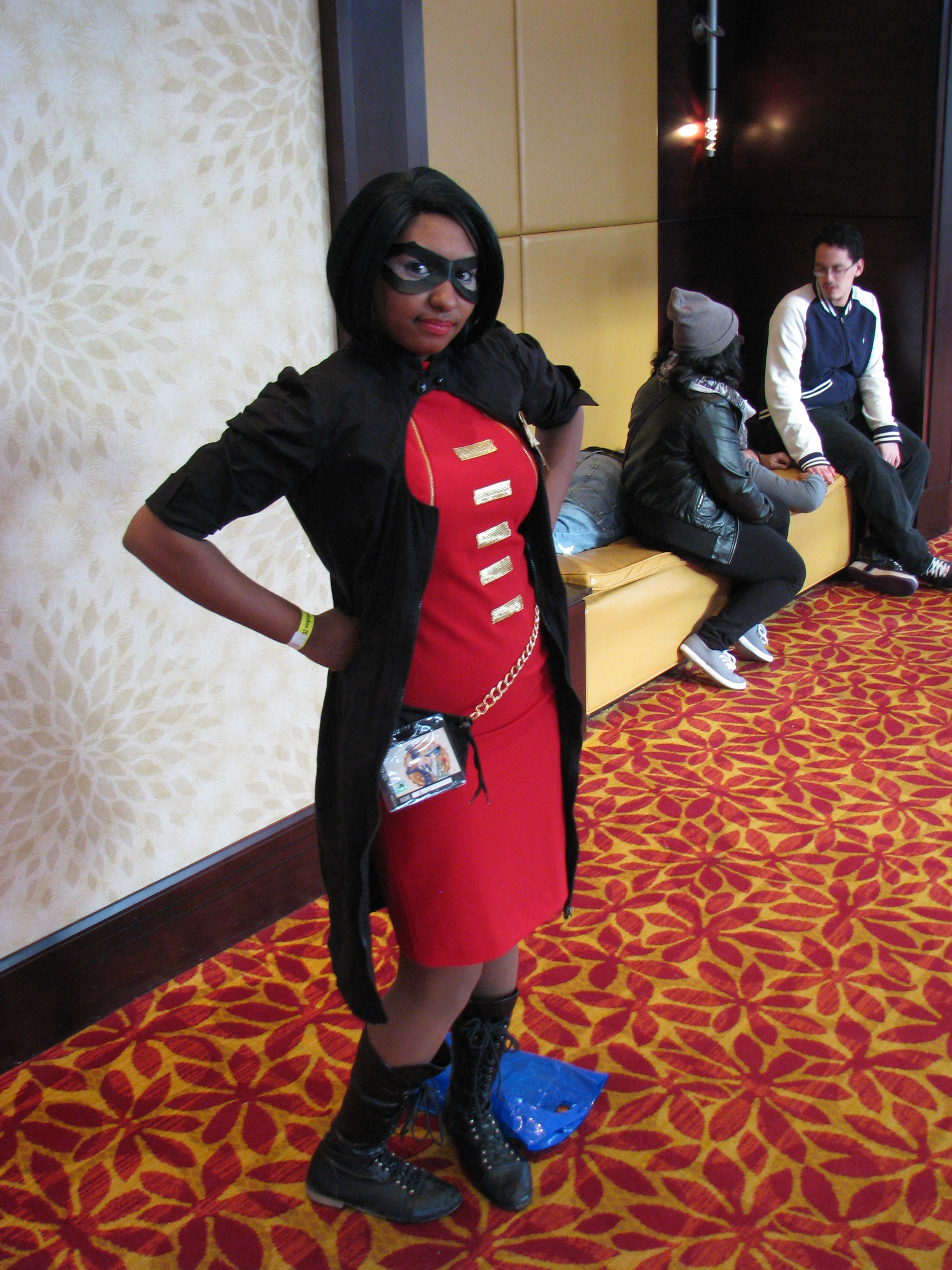 Panels this year offered up an eclectic mix. Engaging and sensitive discussions as well as cultural musings and academic insights were complemented by such oddities as one How-To led by a “professional real life mermaid,” another by a burlesque troupe, a magical girl exercise regimen, as well as an ode to manliness as introduced by a line of topless nerds (and I use the term with great affection). While the program was not offered via Guidebook this year, Zenkaikon did make use of SCHED, which was just as useful (if not more so for those poor souls with Windows® Phones) and greatly facilitated planning. There was a lot of overlapping interests on the schedule, but everything worked out somehow, and the 15 minutes between panels was sufficient to get from anywhere to anywhere within the convention center. 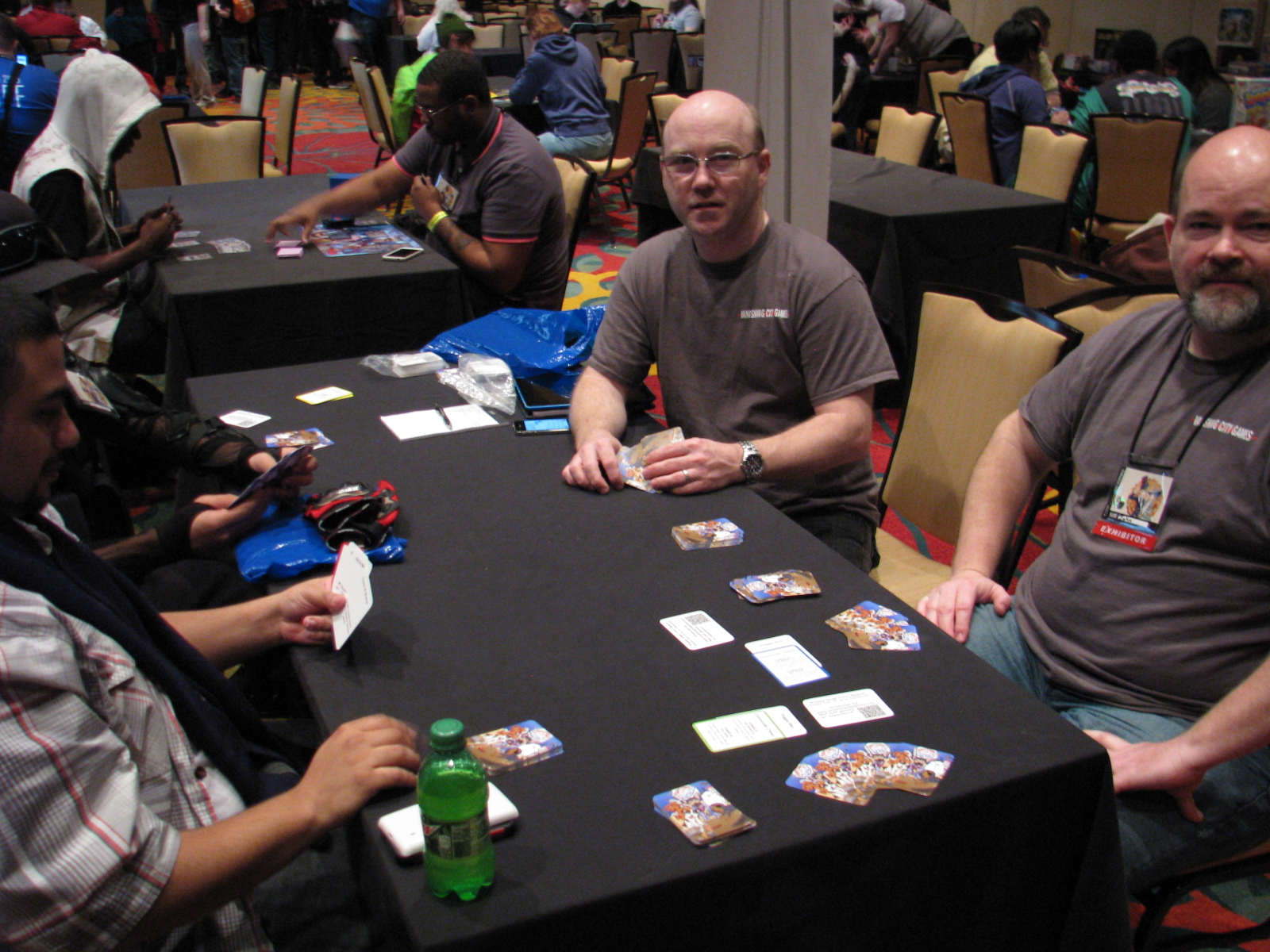 During the one block of time in which I had nothing to do, I was snagged by someone outside the tabletop room and did something I almost never do: played a game with complete strangers. The person who grabbed my attention was from Vanishing City Games, and the prototype card game I joined in on was Puppy Dogs from Space. I’m a dog lover, so spending time looking at adorable renderings of puppies while absorbing, abiding by, and applying the multitudinous rules was an easy sell. I’d liken it to a puppy-themed Miles Bourne and have to say I had a blast playing. The host said the Kickstarter will be up shortly for it, so keep an eye out.

I always like popping in the video game room for a few games on the multi-arcade machines, the number of which was reduced to one this year. The other arcade machine was a dedicated P-47: Phantom Fighter unit. (Not complaining!) There were LAN parties a plenty on various generations of systems, dance-offs, as well as good ol’ one-on-one fighter grudge matches. But the real video game novelty this year was Artemis. 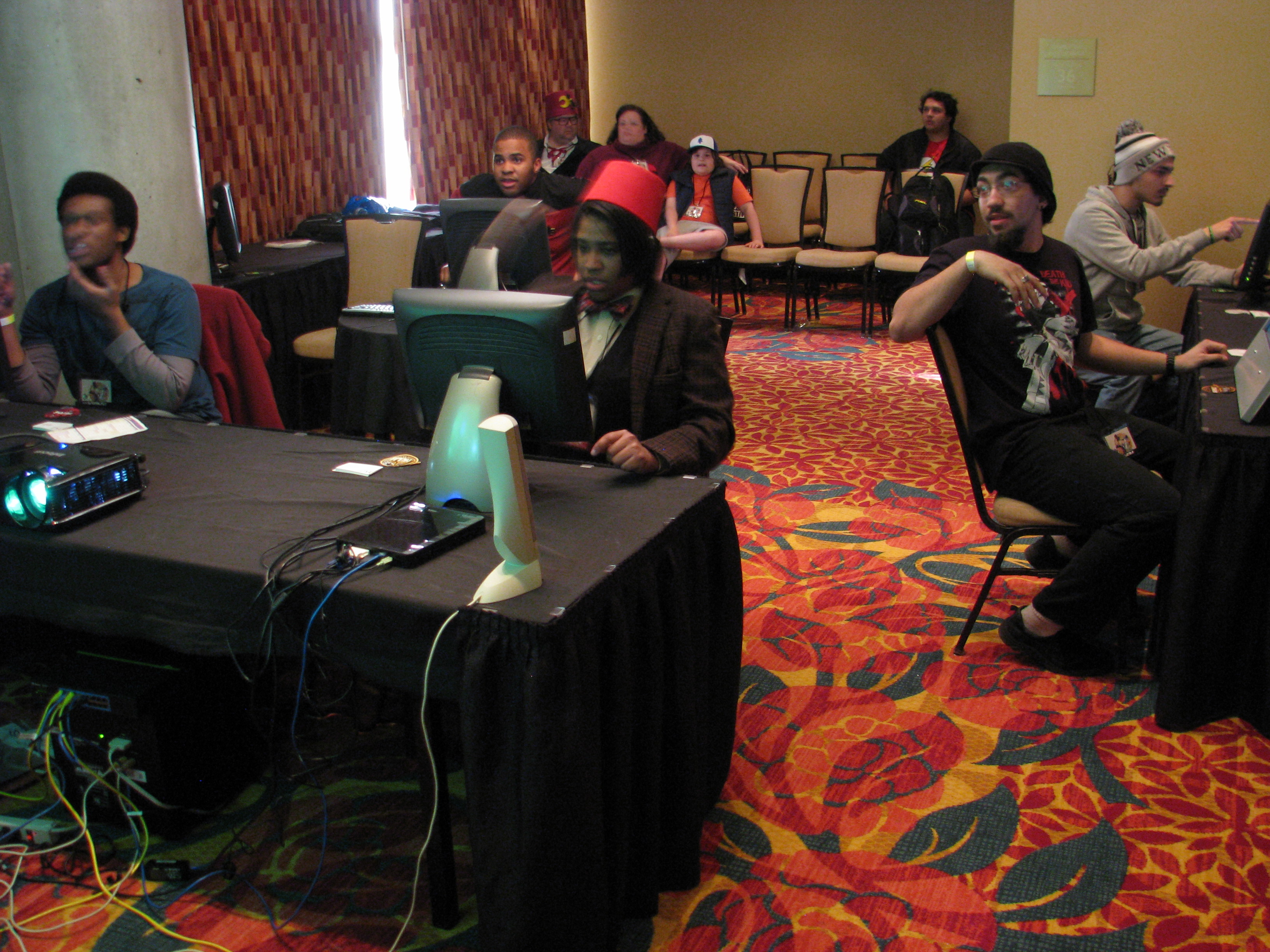 Artemis is a multiplayer, multi-station spaceship bridge simulator that manages to effortlessly evoke a LARP element via the nature of its gameplay. Players sat down at terminals arranged around the room in the style of a command bridge to man communications, navigation, weapons, the captain’s chair, etc. A large projection screen substituted for the “ship’s” main viewscreen, but all the individual terminals were just that: isolated by unique function. While watching one group play, the captain was walking around to each crew member and giving instructions, but each crew member, responding to their own in-game cues, had to call out to let the rest of the crew what was happening. It was great fun to watch and seemed like everyone was having a great time. 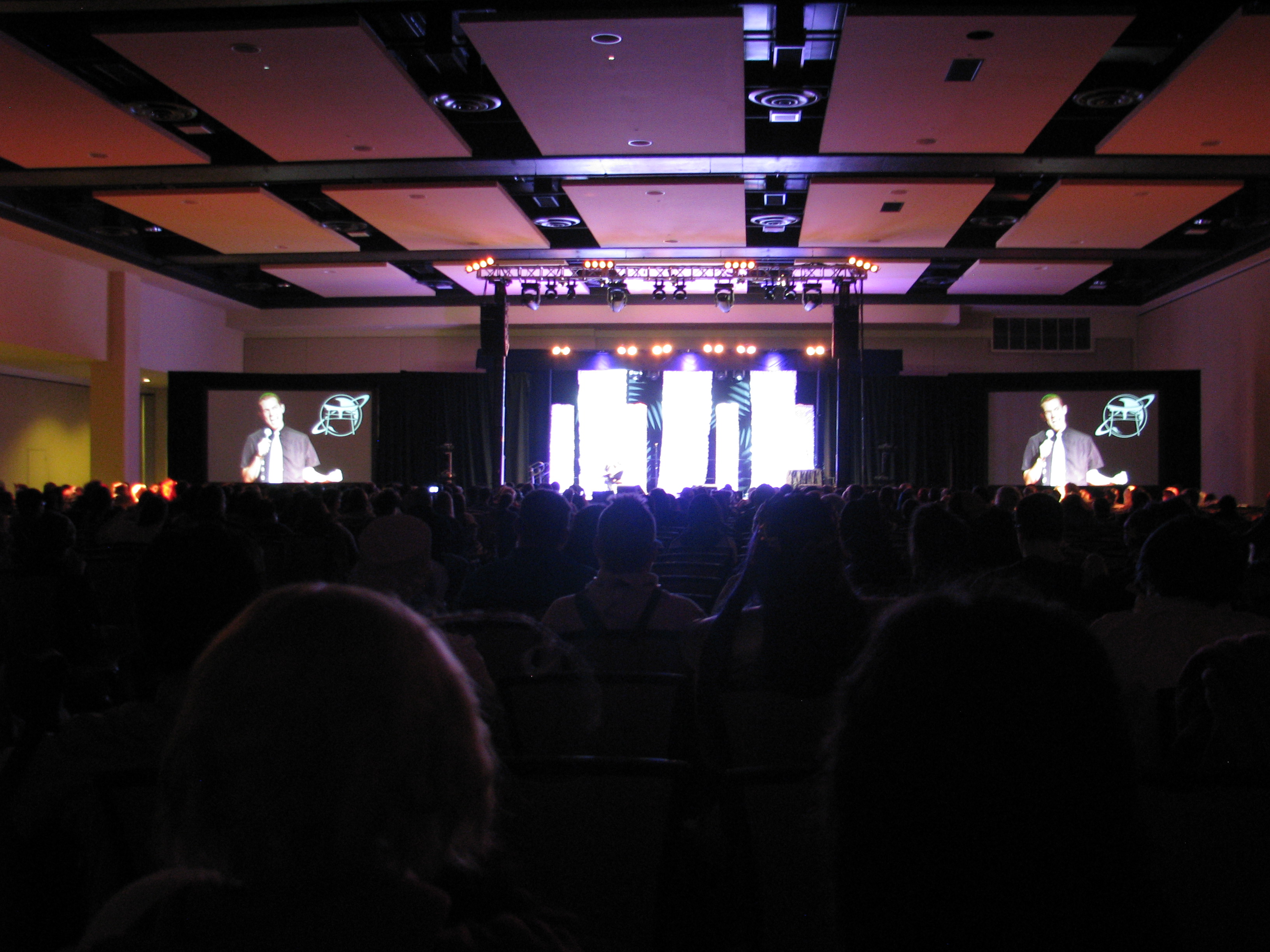 Aside from comedian extraordinaire Uncle Yo (pictured right packing 'em in at Main Events), who has been with this con since the very beginning and is celebrated as a rock star every single year, guests included several voice actors noted for prominent dub roles in domestic productions as well as adaptations of foreign media. As I found out last year at ConnectiCon, attending panels featuring Richard Horvitz and Rikki Simmons is a must simply for their curt humor and inventive replies (which I’ll continue to imagine stem from a general sense of apathy). There were also internet celebs, namely Doug Walker and his brother Bob, as well as the incomparable Kuniko Kanawa, a favorite of the con, who presents demonstrations and workshops on aspects of Japanese culture. Breaking from her usual kimono demonstration, Kanawa led a workshop on making Edo Tsumami Kanzashi. Lastly, but certainly not least, the Ricecookers, a Japanese rock band that has its origin in Boston and currently resides in Brooklyn. Thank you, Zenkaikon, for your commitment to keeping live music as part of the con experience.

I’m ever so glad I didn’t skip Zenkaikon this year due to such silliness as economic constraints. 2015 felt like a transformative year for the con. As usual, there were many wonderful panels as well as some inspired cosplay, but the energy level was through the roof and everything lined up in a right-time-right-place kind of way. Having lost much sleep by not wanting to miss out of what was being offered (and one night where I could not remember where I parked to save my life), I don't even know how I got home after the last panel early Sunday morning (much less how I managed to get up 2 hours later to go to a completely different con in a neighboring state), but Zenkaikon 2015 was certainly worth the lack of sleep. A true ton of fun from start to finish. 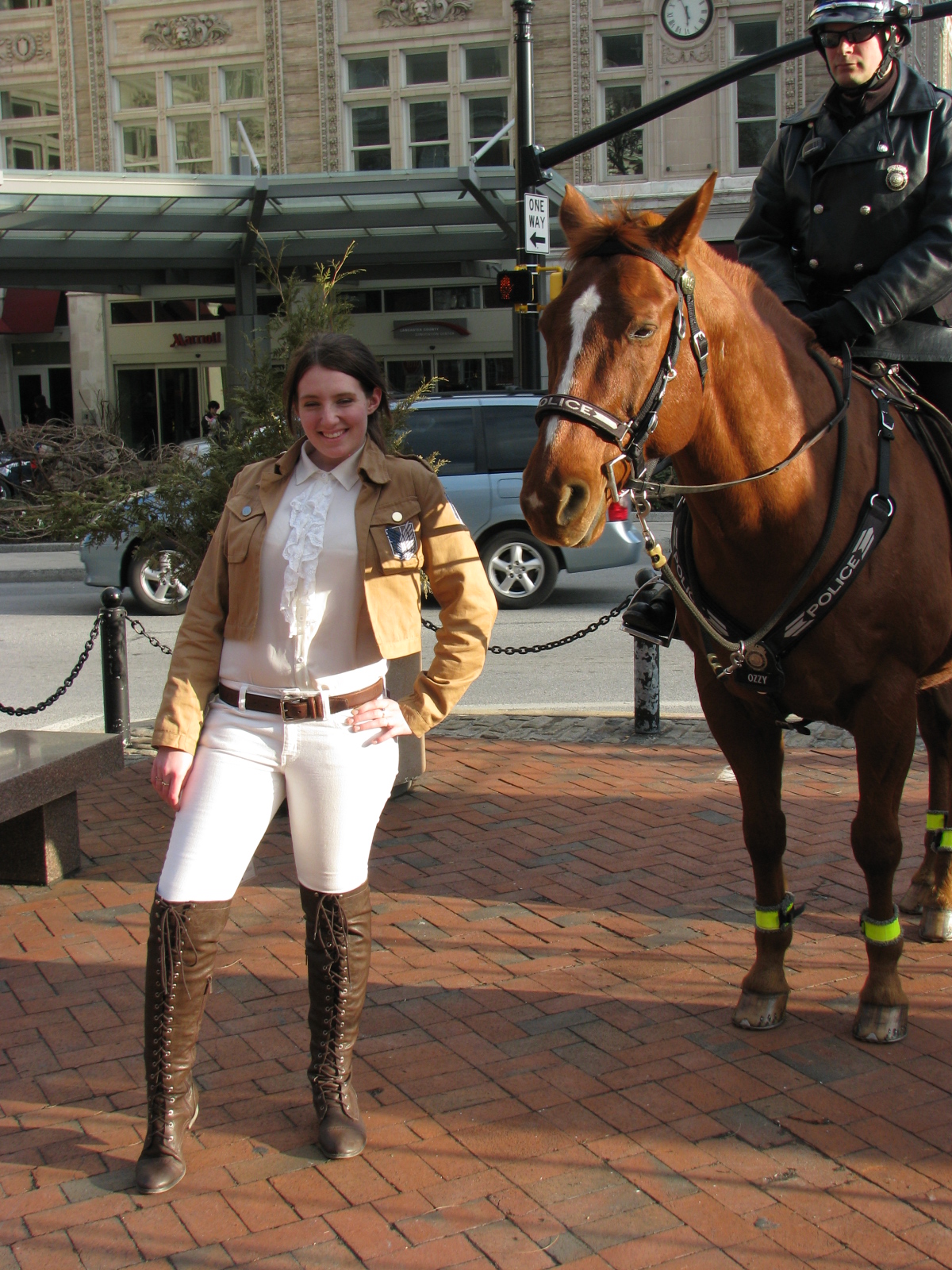