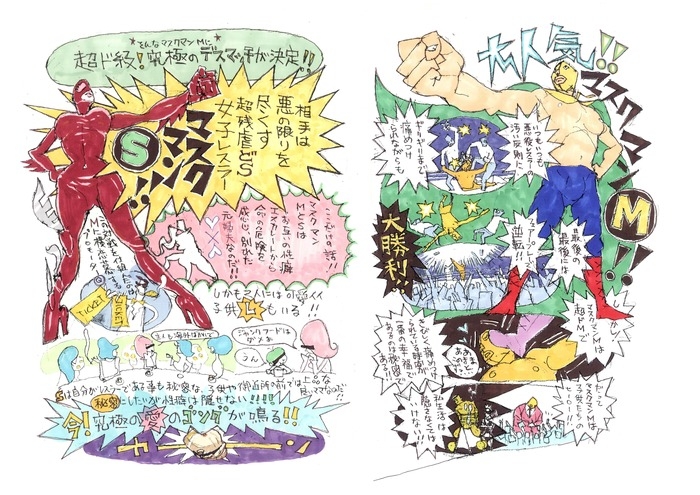 If you're at all tuned into the online anime community (a safe assumption if you're reading this blog), by now you've probably heard about Kick-Heart, the first ever anime production to be financed via crowd-funding service Kickstarter. Studio Production I.G and experimental director Masaaki Yuasa have turned to fans around the world to provide the initial funds to create the film, a wacky S&M-themed love story between two pro wrestlers. Their explanation is that "in Japan, its been very difficult for the next generation of innovators to create more artistically driven projects." The project still needs a lot more money to get off the ground. You should fund this project.

Before you start yelling at me, I get it. You're tired of the "Kickstarter Craze," of having to weigh your support for five new projects every day from major companies and idiot kids with dumb ideas. It's entirely possible that you haven't even heard of Masaaki Yuasa before, so why should you support his work? He's just a weird experimental director, right? I get it, but trust me, you should fund this project.

I'm just as tired of Kickstarter as you are. Since the crowd-funding website gained widespread popularity last year, I have supported only three projects, all from manga publisher Digital Manga Publishing for translations of the work of Osamu Tezuka. I also share your misgivings about Masaaki Yuasa. Mind Game, his most well known project, is kind of terrible, a film that I have described as "made by Masaaki Yuasa for Masaaki Yuasa." His TV series The Tatami Galaxy is alright, but I haven't seen enough of it to form a strong opinion about it.

Nevertheless, this Kickstarter is a harbinger of something much more significant than one movie from Yuasa. In an industry plagued by risk-free remakes and design-by-committee garbage, something like Kick-Heart is a breath of fresh air. A creator had an insane idea, and he wants to make it into a movie — an unthinkable idea in the modern anime landscape. If Kick-Heart succeeds, other studios will surely follow I.G's example, and we may start to see a renaissance of geniune creativity in anime. Heck, Masao Maruyama (founder of studios Madhouse and MAPPA) might even attempt to crowd-fund Satoshi Kon's unfinished final film, The Dreaming Machine. That alone is enough of a reason for me to cast my vote for a Kickstarted anime industry.

The anime industry needs a good kick in the pants, and Yuasa's just the guy to deliver it.

So if you're someone who's disappointed in recent offerings from the anime industry, you had better give something to this Kickstarter. As of this writing the project has over $45,000 pledged (the goal is $150,000 by the end of October), so it still needs a lot more people to make sure it's a success. I don't even like Yuasa's work, but I gave $60 because I believe in what he's trying to do. The anime industry needs a good kick in the pants, and Yuasa's just the guy to deliver it.

And Yuasa's pitch video for Kickstarter: