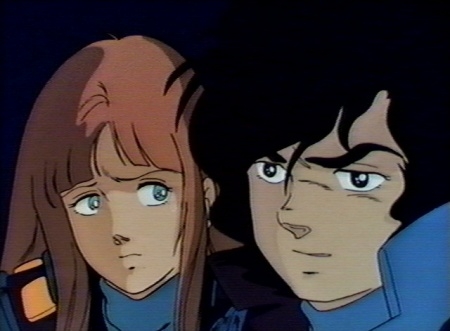 It's no secret that I'm a huge fan of anime character designs. I run a panel about it ("The Changing Faces of Anime") at conventions a couple times a year, after all. So, if you also have any sort of interest in the craft, I invite you to join me for an exploration of just how crazy my character design nerdiness can get.

Crusher Joe is a 1983 anime film directed by Yoshikazu Yasuhiko (who also provided the bulk of the character designs, the screenplay, the storyboards, and the animation). Yasuhiko is probably best known as the character designer behind original Gundam. What's really interesting about Crusher Joe, however, is that it features the work of 12 "Special Guest Designers." The list reads like a who's who of famous manga creators: Katsuhiro Otomo (Akira), Rumiko Takahashi (Urusei Yatsura), Akira Toriyama (Dragon Ball), Hideo Azuma (Disappearance Diary), and Keiko Takemiya (To Terra) are among them.

Being the character design nerd that I am, I figured somebody should catalog which characters were drawn by which designers—after all, the names credited to them refer to characters whose names are never explicitly spoken in the film. In this post I will lay out what I've already deduced, but I need help from you guys to finish the list. Some of the designs aren't so easy to pin down, so I need opinions from other fans. 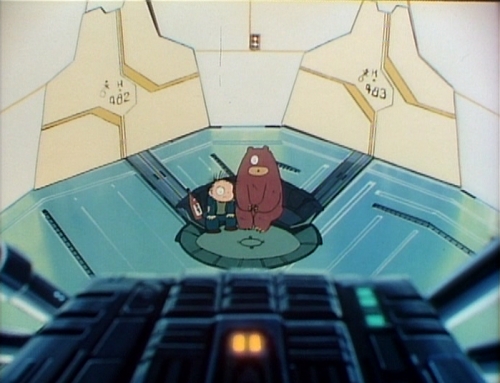 We start off with the easiest design in the film. This design looks almost exactly like Hideo Azuma's autobiographical character in Disappearance Diary, so I'll have to say that the man and his bear friend are "Group Ouch," designed by Hideo Azuma. 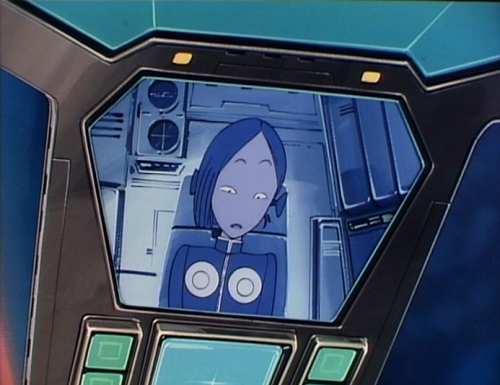 Next up is this woman (possibly a robot, but I'm not sure) who informs our heroes that they'll have to go through customs while arriving on a planet. Though the character seems to have been modified a bit by Yasuhiko and co., it's clearly "Anessa," a Fumiko Takano design (her name is incorrectly translated on the DVD as Fumiko Taano, which is why it's wrong in the Anime News Network Encyclopedia). Takano is the artist behind the 1982 manga Zettai Anzen Kamisori ("Absolute Safety Razorblade"), which won the Japan Cartoonists Association Award and which I will readily admit I had not heard of until looking her up. According to the credits, this character—the only Special Guest Designed character with a credited speaking part—is voiced by Kan Sakai.

Everything else I've got is pure guesswork, since I'm not familiar enough with the artist's work or I can't get a good enough look at the design. Anyway, what follows is a series of screencaps showing likely candidates for guest designs. Let me know in the comments if you recognize a designer's style in one of them. I'm sure I also missed a bunch of these side characters, and it's entirely possible that some of the credits are for mecha designs rather than character designs, so extra points if you find screencaps that I don't list here! 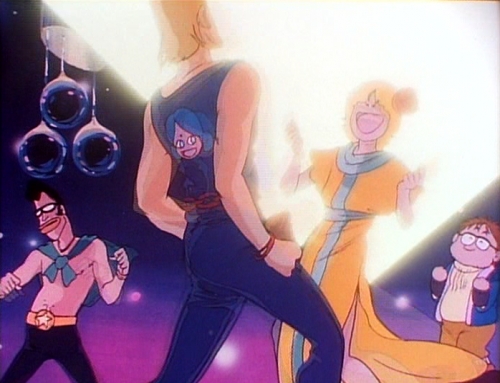 That very happy little dude in the bottom right looks a little out of place at this COOL DISCCO DANCE PARTY (yes they spell it "discco" in this movie). Perhaps he's the work of a guest designer? Is that you Hisaichi Ishii, author of Nono-chan (the manga that became My Neighbors the Yamadas)? How about that SUPER-happy dancing lady, too? Possibly. In a completely unrelated note, that guy has Lalah from original Gundam on his shirt. Rock on, Yasuhiko. 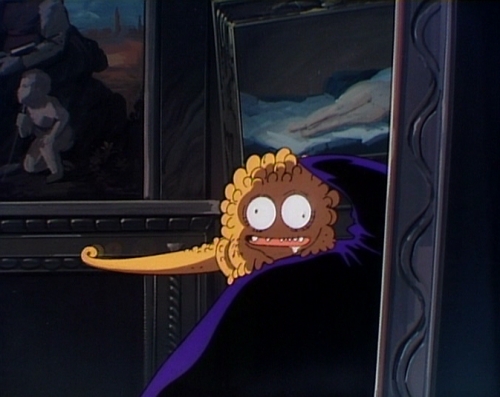 The eeeevil space pirate leader Murphy keeps a weird alien lizard instead of a cat. That's cool, but is this a Yasuhiko original? I think it's a guest, but I can't tell who it is. It also kinda looks like Ishii. It could be Miki Tori, author of Intermezzo. He likes those big, circular eyes. 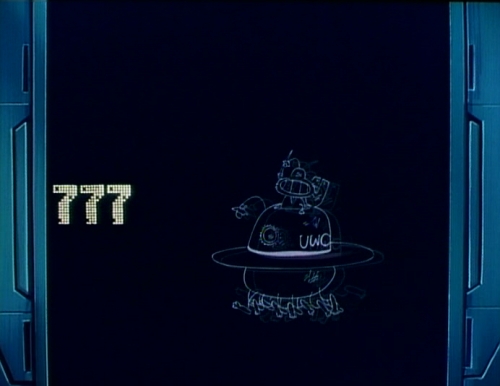 This graphic shows up briefly after Nero finishes up his light-gun arcade game. I don't recognize that character but I'm willing to bet it's from one of the guests. Any takers? 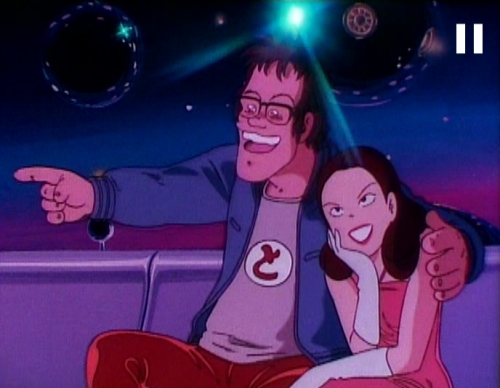 This one makes the list for a couple of reasons. First off, the "to" hiragana on that guy's shirt could be an in-joke about the designer (Akira TOriyama perhaps? It's unlikely based on style, but maybe). Secondly, the girl's face doesn't quite jive with Yasuhiko's style. 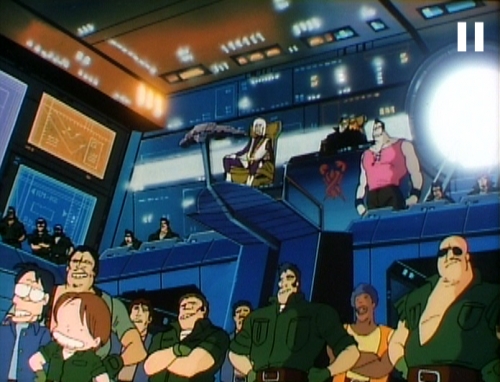 Hey, what's up with that little dude in the bottom left with the big grin on his face? That could be a guest, though I think it's pretty unlikely. 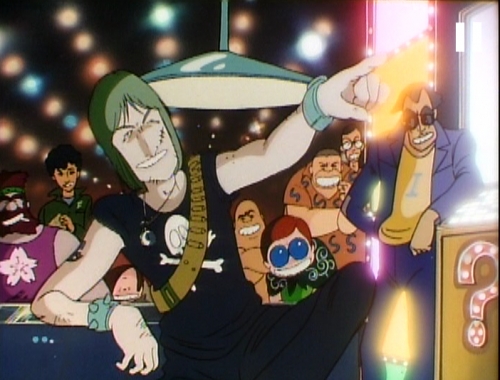 Hey, look at those tough-guy pirates. They look pretty toug—wait who's that tiny person with the sunglasses? (Or are those blue eyes with white pupils?) I don't really have a good guess for this one, but I'm pretty sure it's a guest design, since the character really stands out of the crowd. 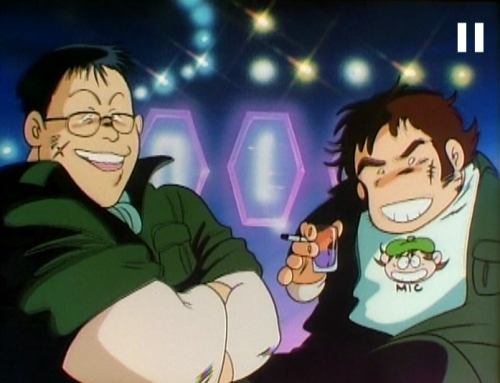 The actual character designs here don't quite seem like guest designs, but that face and the letters "MIC" on that guy's shirt are probably a reference to something. Anybody know? Is that one of the guests at work? 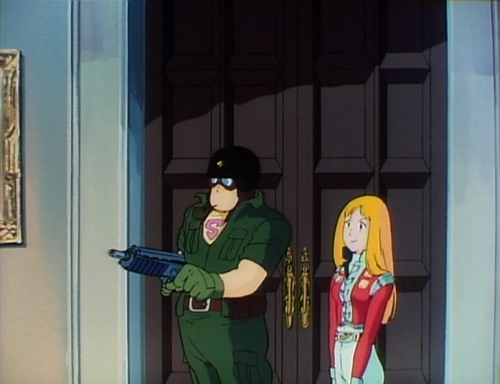 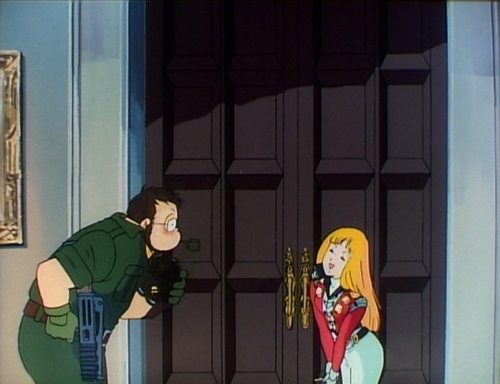 Hm, this space pirate has a suspicious "S" on his scarf, and he's smoking a pipe. That looks like something to me. Anybody recognize him? Once again I'm getting an Ishii vibe here. 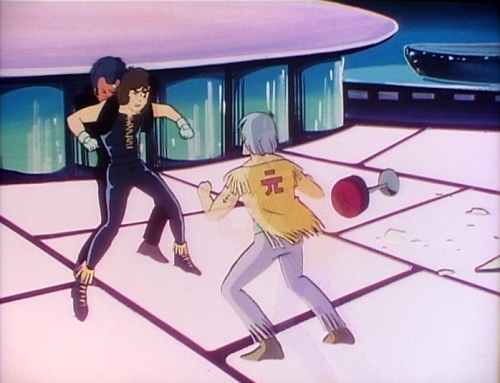 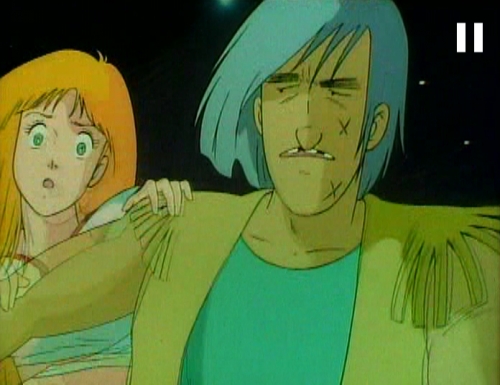 This dude who beats up Joe at the DISCCO dance party is otherwise pretty normal, but his face looks a little out of place. I don't have a good guess for this one, but maybe the kanji on his jacket (which means "beginning" or "origin") is a hint? 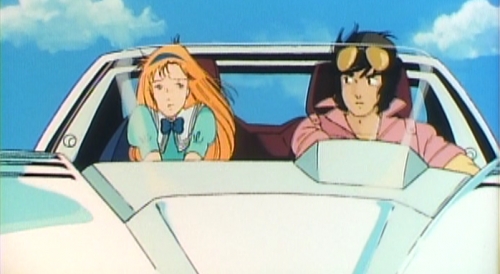 Finally, Alfin and Joe sport some fancy new clothes in this final scene. Shōjo manga superstar Keiko Takemiya is credited with "Date Wear," which could be either the name of a character or a description of some costuming work. Are these clothes designed by Takemiya?

That's all I've got! Below I've listed all of the guest designers, their credits, and their previous work (by Japanese alphabetical order, based on family name, as seen in the actual credit sequence). See which ones you can figure out (assuming you're as crazy as me and willing to try)! 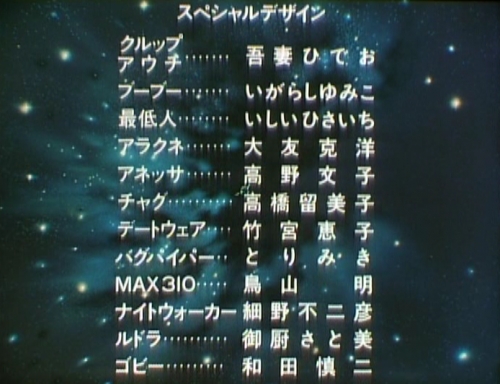