We're back with more Spring 2012 Anime Impressions! This time David catches up with Fate/Zero Season 2 and Ink tackles the ghostly shenanigans of Dusk Maiden of Amnesia. This will be our final first-episode Impressions post this season, but we're proud to announce that we will be venturing into what you might call "pseudo-episodic" blogging.

What that means is that our writers will be writing up larger groups of episodes (like, say, episodes 1-4 of a series), tackling the whole group in order to provide more in-depth discussion and critique than a typical episodic post. This is new ground for us, so we hope you'll stick around and comment on these posts as they go up. Enjoy! 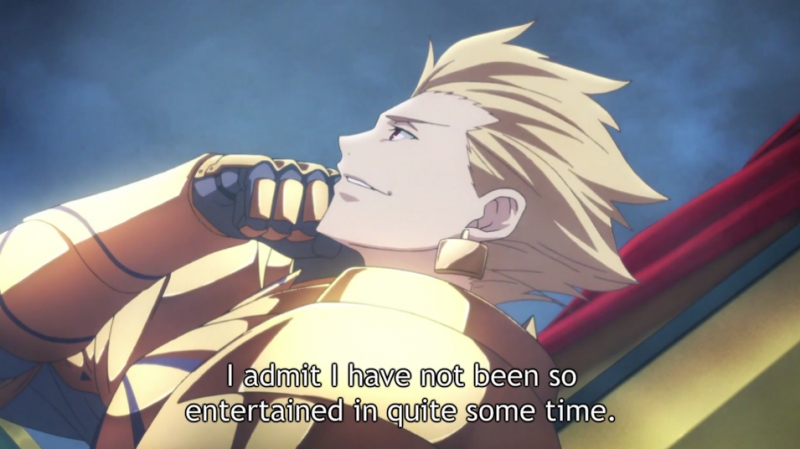 Airing during the most packed anime season in recent memory after every other show has had time to impress, the first episode of Fate/Zero Part II needed to be near perfect, or else I might've stopped watching altogether. After 13 weeks of build-up and another 13 or so weeks of delay, with an extra week on top to avoid watching in 360p, forgive me if I’ve lost my patience with this show.

Unsurprisingly, F/Z Part II episode 1 is not perfect, but it's as direct a follow-up as one could have hoped for. As if the Winter season never happened, viewers are dropped right back where Part I teasingly ended on. This episode's glorious aerial combat sequence alone features more spectacle than any scene in Part I. ufotable continue to raise the standards of TV anime with stunning lighting and great camerawork in each scene, making most shows this season look impoverished.

If the first episode is anything to go by, Part II aims to please a restless crowd disappointed by the non-existent body count of Part I. Time is running short, both in the F/Z universe and in the show’s episode count, leaving little excuse for characters to sit around and talk for episodes at a time. At the cost of all the characterization and philosophy from Gen Urobuchi’s original F/Z light novel, the story will at least begin to move now, if only out of simple necessity. I’m not convinced that F/Z will be my most anticipated weekly release, especially as it's the sole Crunchyroll delaycast among the six other shows I’m watching, but there are still 12 more opportunities to make the wait worth it. 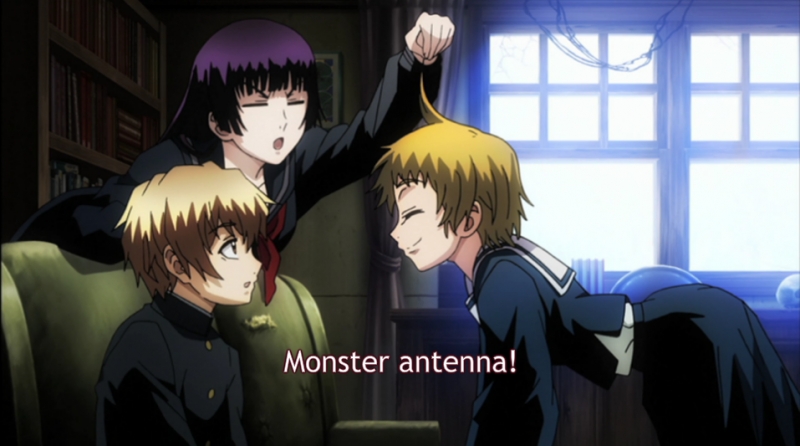 Tasogare Otome x Amnesia (Dusk Maiden of Amnesia) centers on activities of the paranormal investigations club at Seikyoy Private Academy. Rumors about paranormal activity haunt this school, and the club members — Kanoe, Niiya, Kanoe, and Okonogi — task themselves with investigating the more substantial reports they receive. The twist is that not all of the club’s members are, shall we say, on the class attendance list.

I was wary of this show based on its premise, which sounded like something akin to a mash-up of Sket Dance, Ghost Hunt, and Another. To my surprise, however, the humorous first moments of the show defused my standoffishness. The first half introduces Okonogi, who is so obsessed with trying to sort out which mysteries to investigate that she remains completely oblivious to the attention-seeking antics of a local poltergeist. This ghost turns out to be the club’s omnipresent president, who can be seen by all the members except Okonogi and is responsible for at least some of the recent paranormal events reported by students.

Playful humor is the key here. But as much as the first 10 minutes are strikingly tongue-in-cheek, the rest of the show is 98% mired in the usual adolescent anxiety yuks. The remaining 2% is comprised of scenes where the club president does things just to make Okonogi freak out (which alone are charming and make the first episode worth the view). Not what I was expecting, and pleasantly so, this show has at least hooked me in for a few more episodes to see where it wants to go and how it’s going to take its audience there.