The 2012 Spring anime season is in full swing, and we've got some impressions of the latest series. Wondering whether you should examine the effect of zero-gravity on the power of brotherly love in Space Brothers? Thinking of checking out the saliva-tasting romantic shenanigans of Mysterious Girlfriend X? Or maybe you want to dance along to some swingin' jazz music in Kids on the Slope. Well, Phillip and Evan are here to run down some of this season's hottest shows JUST FOR YOU. 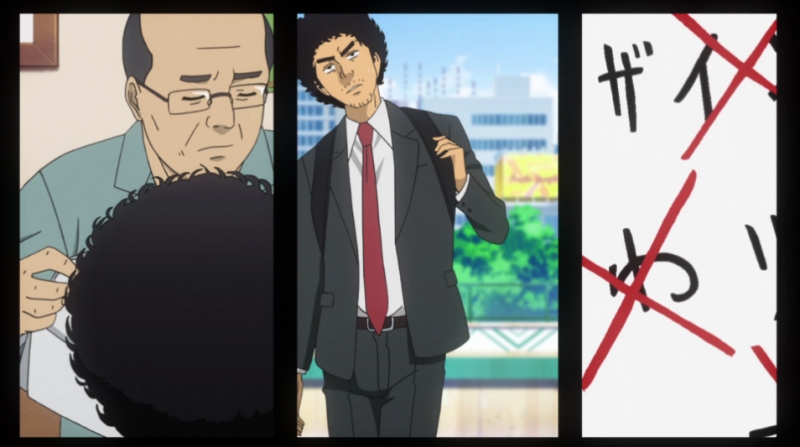 Mutta and Hibito Nanba are close brothers. One night, as children, they witness a UFO in the night sky as it streaks toward the moon. At that moment, they both promise to get to the moon. But 19 years later, while Hibito is on a fast track to being the first Japanese person on the moon, Mutta’s life has hit an impasse. That is until his younger brother helps him remember the promise he made to himself, all those years ago.

How to describe Space Brothers? How’s this: I never bothered with the thematically similar Moonlight Mile, so when Space Brothers was announced, I wasn’t too interested. But, much to my surprise, it’s a pretty good series. Hibito is the kind of person I’d like to be: determined, energetic and fun. However, Mutta is the person I’ll probably end up being: down on his luck, unmotivated, and a killjoy. But there’s hope for Mutta. Being fired from his job means that his promise that he and Hibito made to become astronauts has suddenly become a real goal for him to strive towards, however impossible the task is. This first episode has the beginnings of a good story of the greatest of adventures happening to the most ordinary of blokes, and the deadpan humor nicely complements the serious bits. The animation isn’t particularly impressive, but at least it’s competent. I like the leads and I’m looking forward to watching them grow over the course of the series. 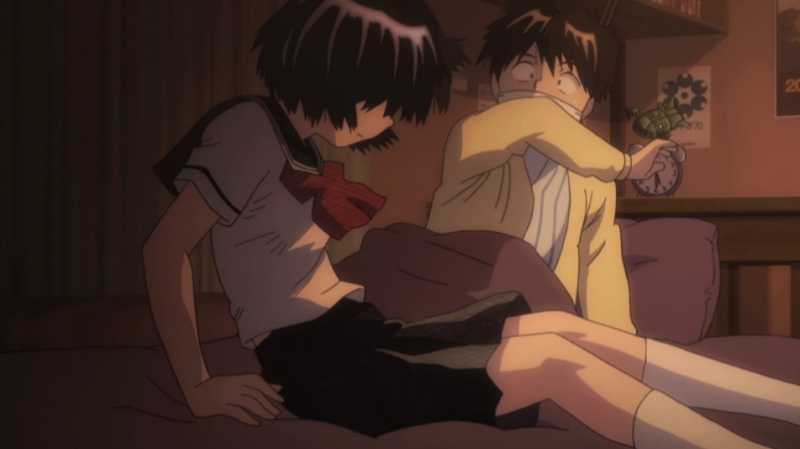 (EDITOR'S NOTE: That's not a typo. Watanabe and Hoods Entertainment are producing both Space Brothers AND Mysterious Girlfriend X.)

You knew we were going to have to talk about this show eventually. Akira Tsubaki is a typical teenager. He meets a weird girl, Mikoto Urabe, who transfers to his school. One day he finds her asleep at the end of school classes at her desk. After she leaves, he sticks his finger into the pile of drool she left behind on her desk and puts it in his mouth. He gets sick afterwards and she visits him at home to explain that he’s suffering from love-sickness and only her drool will cure him. So he and she become boyfriend and girlfriend.

There, I said it.

Mysterious Girlfriend X is a weird series, from its circus organ score to the insane nature of Akira and Mikoto’s relationship. I mean, she tells him that a little voice told her he would be her first sex partner! There’s a glacial pace to the first episode. Nothing happens with any kind of speed (other than the fundamental ways that Akira’s life changes once Mikoto comes into it). Akira's dream sequences are well animated and they are excellent next to the relative normality to his real life. Plus the character designs are quirky. Unlike some reviews that bash the fanbase for liking something like this, I prefer to simply marvel that something like this exists. We’re usually treated to Japanese school kids having nice, safe relationships, and this is definitely different. It’s both repellent and fascinating and I’m compelled in a strange way to see how this all falls into place. Just don’t ask me to talk about it in anything but relative terms. 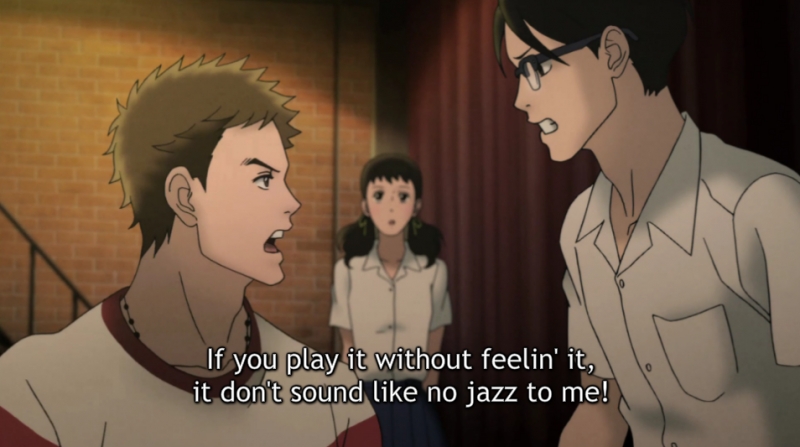 Kids on the Slope

In 1998, director Shinichiro Watanabe created one of anime's enduring classics, the jazz-infused space western series Cowboy Bebop, and in 2004 he came back for more genre-bending antics with Samurai Champloo, a hip-hop samurai adventure. Now Watanabe returns to the director's chair for yet another musical number, but this time it's a little different. Kids on the Slope (Sakamichi no Apollon), based on a josei (women's) manga by Yuuki Kodama, isn't exactly a slice-of-life to the tune of jazz music — it's a slice-of-life about jazz music.

Kaoru has been moving from school to school for his whole life, and after years of meeting new people and getting rejected by local cliques, he's developed an acute case of what appears to be social anxiety. Despite a less-than-warm welcome from his classmates, however, within the first few hours of school Kaoru finds himself in the company of not only the pretty class representative Ritsuko, but the intimidating delinquent Sentaro. Kaoru plays classical piano and Sentaro plays jazz drums, so while their decidedly Boys Love-friendly personalities clash left and right, they're clearly destined to play some sweet jazz music together, thanks in part to some prodding from Ritsuko.

Watanabe's deft touch is already on full display in Kids on the Slope, with excellent pacing, beautiful, slightly shaky camera work, and some expertly placed musical cues. Nobuteru Yuki's character designs retain their angular charm without his conspicious noses, and the animators at MAPPA make great use of soft, watercolor-esque shading to give the show a distinct painterly quality. Realistic, heartwarming, and funny (in an "awww, awkward teenagers" sort of way), Kids on the Slope should be at the top of your list of must-watch shows this season.