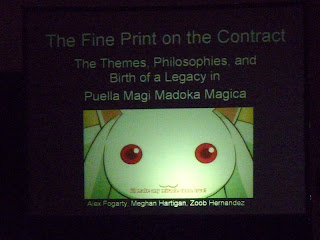 We were out of the picture for a little while, so here is one of our articles from 2011 that we never got around to posting. Enjoy!

One of the last panels of the Otakon weekend was the grandly named "The Fine Print on the Contract: the Themes, Philosophies, and Birth of a Legacy in Puella Magi Madoka Magica." I must admit to being fan of the series itself I was curious to see if such an ambitiously named panel could live up to my expectations. The panel was aimed squarely at people who had already seen the balance of the show and it pulled a very respectable crowd into its mid-sized panel room, especially given that Madoka is currently (EDITOR'S NOTE: when this was written in August 2011) only available via fansubs.

The panel started very strongly, and I feel I have to give the panelists top marks for their ambitious introduction, which clearly showed that they had put a lot of thought into the content that they wanted to cover. Also praise-worthy was the miniature AMV that one of the panelists put together which set the tone of the panel as a whole — exploratory but still humorous.

The panel hit on a number of different points — the use of magical girls as a allegory for puberty, an examination of gender relations presented in the show, altruism, the existence of the Ubermensch and role of a deity (if there is one) in the shows universe. All of the individual points were well presented, in particular during the altruism and "Where is God?" sections where the panelists had some very good exploratory discussions amongst themselves. I would have greatly enjoyed more instances of this as opposed to the sections where the three panelists took turns handing off the same argument between each other. The panel certainly had enough meaty content to live up to it's name and presented it in an approachable, engaging manner.

Sadly, this is the part where I write up a small laundry-list of niggling issues I had with the panel, none of which "ruined" the presentation but taken together weakened it. Primary among my irritations was the over-use of PowerPoint slides — at some points the panelists exhibited my pet hate habit of reading directly off of the slides and not adding anything to the text on screen. This, combined with the aforementioned lack of debate between the panelists left some very interesting points relatively unexplored. The slides also contained numerous typographical errors — not a major issue in itself but combined with previous niggles was indicative that the content presented could have done with an additional critical look to shore up the arguments presented and provide a more "solid" talk overall. In particular the lack of a proper conclusion before the floor was opened up for Q&A at the end of the panel left me feeling somewhat unfulfilled.

An additional misstep was taken in the middle of the panel when the audience was asked to respond to a small question — sadly this did not go as planned as instead of answering the question participants instead rushed the mic to present their own theories and have miniature discussions with the panelists. This took a lot of the momentum out of the discussion and it never fully recovered.

To be frank, I did not expect great things from this panel — rather cynically I presumed the discourse would be at the level of message board chatter and I was very pleased to be proven wrong. The panelists here have some very good ideas and discussion points tobring to the table, and if they can take what they currently have and iron out the kinks then they will have a very robust and intriguing panel.