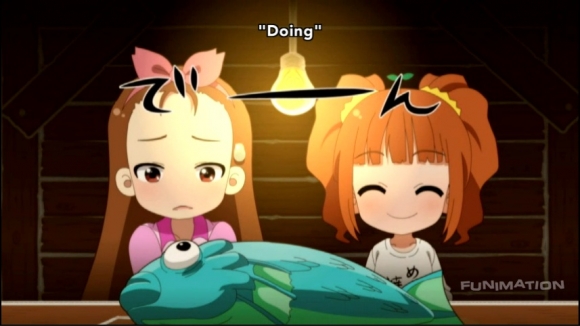 There are shows you watch to waste some time, just background noise while you do other things, nothing special that you particularly mind filtering in with divided attention. Then there’s PUCHIM@S, a show engineered only to waste time and remind you to spend money on more iDOLM@STER merchandise.

PUCHIM@S is a series of very brief shorts based on a 4-koma manga depicting the banal shenanigans of the 765 Production offices as they wrangle a bunch of deformed copies of the 765 Idols, each with a quirky trait that contributes to some wacky scenario. It could have been a good, if unambitious idea, but the only sputter of creativity PUCHIM@S offers in the first 10 episodes is the gall to carry through with a boob gag that goes on for more than one episode. 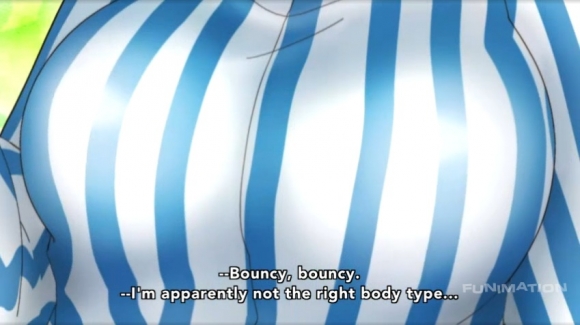 Let’s get it out of the way: PUCHIM@S is for fans only. At two minutes of actual content once the ending song and preview are stripped away, the shorts are too, well, short to even bother critiquing. It is nothing but pure fluff that exists only to sell Character Image CDs. It’s so pedestrian that I feel ashamed for even suggesting that I can fairly write an impressions post for this show.

Since even thinking about PUCHIM@S is a waste of mental resources, allow me to rag on the FUNimation player now. The FUNimation player turns a two minute experience into a four minute endeavor. I can never play anything straight through the first time, the 720p adjustment is as wonky as ever, and there is no auto-play into the next episode. PUCHIM@S isn’t something you want devote attention to, but using the FUNimation player requires rapt attention by default. I was so on-edge from getting the player to work correctly that something as insignificant as PUCHIM@S got weighed down by all this unnecessary pressure. 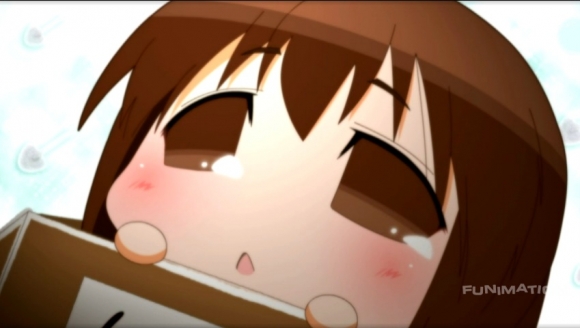 PUCHIM@S is only the second-weirdest iDOLM@STER thing out, so it’s not even distinctive in a back-handed fashion. In a time where the market for two-minute anime shorts is looking as stacked as anime's Spring 2012 season, PUCHIM@S may not be the worst thing, but it sure ain't no Inferno Cop. If you’ve already watched 2011’s iDOLM@STER anime and need to watch an iDOLM@STER show right now, chances are you haven’t seen Xenoglossia, which is a fantastically improbable mistake of Japanese animation that somehow ended up printed on Region 1 DVDs. While Sentai Filmworks’ licensing of Xenoglossia five years after the TV broadcast was questionable, I don’t know how FUNimation plans to sell PUCHIM@S. Perhaps PUCHIM@S is only a slight blip in the greater scheme to bring iDOLM@STER proper to America and will likely end up relegated as a curiosity that sits in FUNimation’s library until the rights expire.