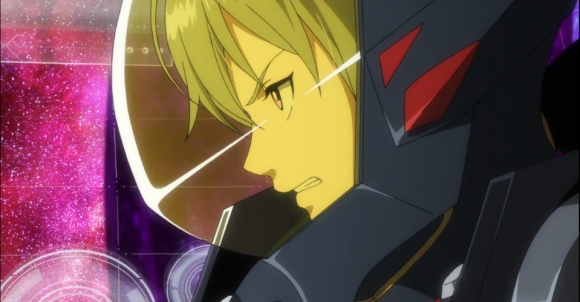 Phillip:Hmm, this is a tricky opening gambit despite being deep-fried in sci-fi with an epic opening battle: protagonist Ledo and his mecha (yumboro), Chamber, are pitched against the Hideauze only to become lost in a wormhole accident that sends Ledo and Chamber into a world that I could only describe as one part Orguss, one part Turn A Gundam. So the audience learns that the world Ledo ends up in is some kind of backward step in terms of technology. I like the setup, and meeting the crew of the Gargantia (a modular flotilla) before Ledo does is a good way of bringing the audience into the story.

David:Lots of words that don’t mean anything. Lots of beamspam. I’m surprised I’m not watching a modern Gundam series. No, I’m watching Gargantia on the Verdous Planet, a show that gets good once the aliens and robots go away. This first episode demonstrates potential, but the delivery is spray-and-pray—briefly touching on many ideas that will be shelved until the time calls for the aliens and robots to come back. For now, in one of the worst-kept secrets of Anime Spring 2013, Gargantia will focus on Ledo’s integration with the primitive Earthlings. Episode one could have been more interesting if the key visuals, trailers, and marketing copy didn’t immediately give away Ledo’s arrival on Earth. So while there aren’t any surprises here to someone who has followed the hype behind this show, it at least seems to have something different to offer this season (if not necessarily a new concept). 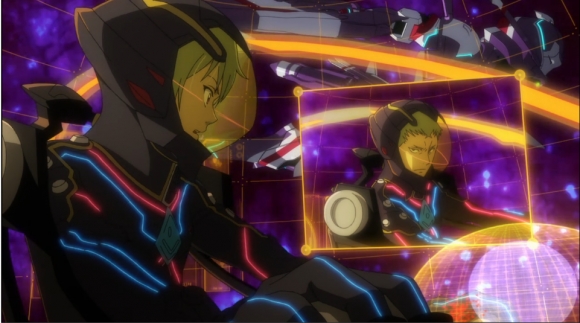 David:A one-man stand-off between Ledo and the entire Gargantia fleet erupts into not much of anything; the natives seem less interested in stringing Ledo up and more interested in seeing his robot fly around. Gargantia settles down to a comfortable pace and allows the world a chance to breathe. There’s an attention to detail in Gargantia that goes beyond what I would expect from a typical anime. Whether it’s a character gesturing with their hands or tying their hair back, such emergent mannerisms enrich the conversations. The end of the episode gives a taste of Ledo’s militaristic lifestyle clashing with the less-intense, yet still survival-minded lifestyle on Earth, hinting that Ledo will not have an easy time transitioning into a life there.

Phillip:I have to agree with David in that this show seems to work best when it's moving slowly, building characters and ideas as it goes along. This episode shows that Ledo isn’t on a world in what he knows as the Alliance; all his rules of warfare don't apply. You can really see Ledo try to figure out the gravity of his situation. With nothing left to lose, he stops fighting and decides to smell the roses. Now, the interesting thing about Ledo is that he does all of these things without realising he's doing it. As if despite being born in space and knowing only war, his in-built humanity starts to assert itself. I have high hopes for a series that trusts itself to take it easy on the second episode and still not look nervous. Ledo takes local girl Amy hostage but soon realizes the futility of doing so. This episode shows Ledo realising how far into the rabbit hole he’s gone, and he kind of settles into a friendly standoff against the locals. I find it amusing that Ledo is reminded by Chamber that he could simply destroy the lot of them and that Ledo keeps shooting the suggestion down. Chamber isn’t suggesting that course of action because he wants to kill the people on the Gargantia; he's just giving Ledo an option. However nice Ledo seems to be, the end of the episode reminds us he’s a soldier; his response to the pirates attacking the fleet is a natural, honest, and brutal response. Nice sharp shock there, and it works for me. 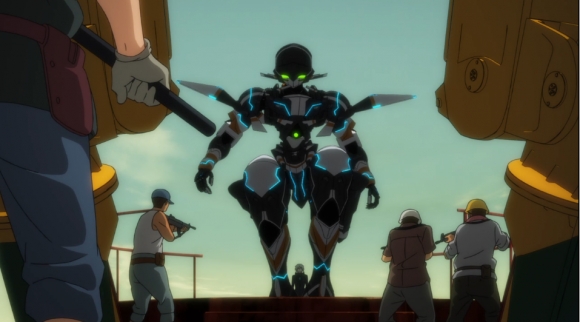 Phillip:I can see the humanization of Ledo in this episode as he deals with the aftermath of his actions against the pirates and the pirates' natural response. Lukkage, the Pirate Empress, is over-the-top and a brilliant little diversion, but her impact on the episode goes on for way too long. She takes on the Gargantia fleet and then tries to kill the fleet commander, but her dialog contributions are a bit unnecessary. On the plus side, Bellows, the ship administrator whom Ledo previously saved, helps him understand that this world is not the same as the one from which he came. Also, Ledo is shown stepping out, figuratively and literally, from behind Chamber to speak his first untranslated words to, appropriately enough, Amy since she's the one with whom he first interacted when he arrived.

David:Once Ledo expresses panic at the prospect of having to consume another animal corpse, I understood that Gargantia is a show that will build itself on the minor details. On Earth, Ledo is as far removed as possible from the world from which he came. So it’s both surprising and near-immediately understandable by the audience that perhaps a race as advanced as Ledo’s does not rely on meat as a source of nutrition. Gargantia strikes a nice balance between the amount of showing and telling to remain interesting, even without the arrival of the pirate fleet for some requisite action scenes. 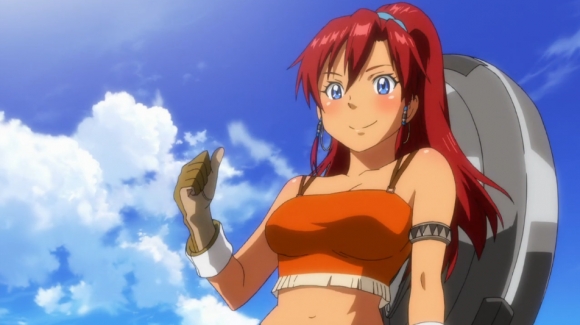 Phillip:Here Ledo finds himself in a moment of down time, wondering about the world in which he finds himself. I know he does so before, but now he begins to explore his surroundings and ask questions. One could argue that he is gathering intelligence, but Ledo talks to people who really have no useful information. One of the most striking things is when it rains; Ledo doesn't know what rain is. He kind of freaks out until Chamber tells him there's no danger. It's a refreshing reminder that Ledo simply doesn't come from this neck of the woods.

David:For a show that began with an awfully loud space combat sequence, this series sure knows how to portray the tranquility of sea life. Most anime tends to stall out with their visuals and animation after three or so episodes, but not Gargantia. Every frame is rich with detail, showcasing a beautifully realized setting that goes beyond my expectations for TV anime. Looking at the world of Gargantia is enjoyable in and of itself without having to mention Ledo’s convincing struggle to adapt to a new life. 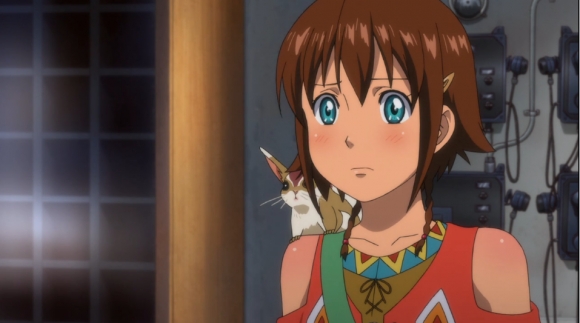 David:Even though it's set in the middle of a planet where water is the new land, Gargantia gets a beach episode. To be fair, it’s a good beach episode that doesn’t toss out what Gargantia is building up towards. Even while the crew of the fleet strip down to nothing and take it easy, Ledo’s still fixated on finding himself a suitable role aboard Gargantia. Ledo even begins to show some resentment as he watches Chamber exceed his pilot's own usefulness to everyone else. It’s almost a little heartbreaking to watch Ledo reduced to an errand boy for others, fostering the impression that even in a far-flung post-apocalyptic time the job market is still terrible.

Phillip:Of course this episode was coming. With as much drama and seriousness that preceded it, there was bound to be a beach episode. Things shut down on Gargantia because they hit what we would call the doldrums, so people decide to have a party . . . something that doesn't compute for Ledo. So the audience gets treated to a flesh-fest of the ladies of Gargantia (granted, most of them barely wear anything anyway), while Ledo gets chased by cross-dressing men. I'm all for comedy, but this episode almost became too much. Luckily Gen Urobuchi and Kazuya Murata give us a moment with Ledo and Chamber, where Ledo essentially asks a basic question: if I'm not killing space aliens, then what do I do with my time? So Ledo goes looking for work despite Chamber telling him it's not necessary. This seems to indicate that Ledo isn't a mindless killing machine and can, if he chooses to, see the world with better eyes. 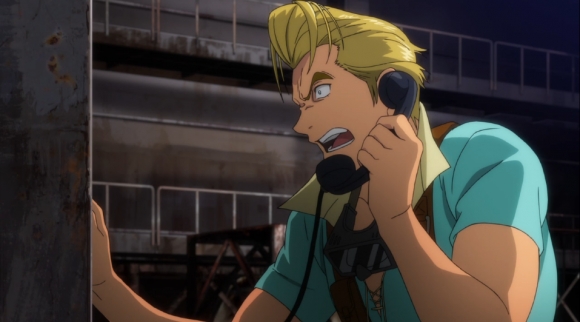 Phillip:One thing that I like about anime is that I can be watching it and then, on the turn of a screw, it will change time and feeling. Ledo finally finds work as a fisherman but is then asked by both Pinion and Bellows to work with them. Ledo had finally settled into a life on Gargantia. He and Amy share a very tender moment, and Ledo chooses to work with Bellows. But his "excitement" is shortlived. While working on an underwater wreck, a creature which Bellows recognizes as a whalesquid approaches. Ledo responds by attacking, because Chamber tells him it's a Hideauze, the type of creatures against which he was formally waging war.

David:Phillip, how can you neglect to mention the belly dancing? If you thought last episode was hot, this episode will sear your eyebrows off. Following along with Ledo and Pinion’s conversation in the restaurant is made impossible as the camera repeatedly cuts to gyrating hips every few seconds. It makes a lot of sense now why Production I.G. would bring on an ero-manga artist to design the characters after watching this episode. The dancing doesn’t really add anything to the show, but since it appears as if the aliens are coming back into the story, at least the studio is getting every last bit of sexual appeal out of the way before the focus shifts. 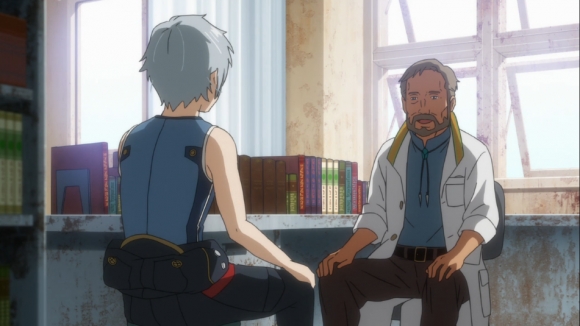 David:Gargantia, of all possible directions, why would you go this route? Things begin to seem amiss when Chamber splatters a whalesquid by hugging it to death. Pinion’s character does a one-eighty from affable lug to scheming jerk with a vendetta. Ledo behaves like a psychopath who forgets where he is at the sight of anything with tentacles. I praised Gargantia earlier for its keen attention to detail, but to hastily introduce a heavy amount of drama in the space of one episode sinks whatever message I believed Gargantia to be heading towards. I really hope it rebounds from here somehow.

Phillip:Ledo's suspicions are confirmed about the whalesquid, but now his training and deep-seeded hatred takes over; he plans to wipe out the rest of the whalesquid. The killing of these creatures makes everyone in the fleet nervous, as the whalesquid are seen as lucky. Luckily both Ridget (a commander on Gargantia) and Amy convince Ledo not to attack a school of whalesquid that seemingly come looking for Gargantia and end up buzzing the fleet. But the damage from Amy and Ridget has been done. Ledo no longer trusts them, and Pinion convinces him and another commander to leave the fleet and go whalesquid hunting. I like this episode, because it shows that all the people want to do what they do in order to help the people they care about. But sometimes you can't see the wood for the trees. 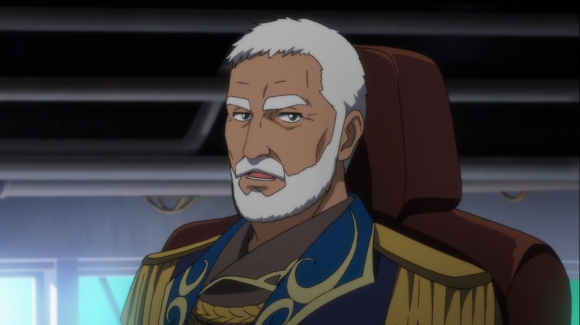 Gargantia on the Verdurous Planet is now streaming on Crunchyroll.