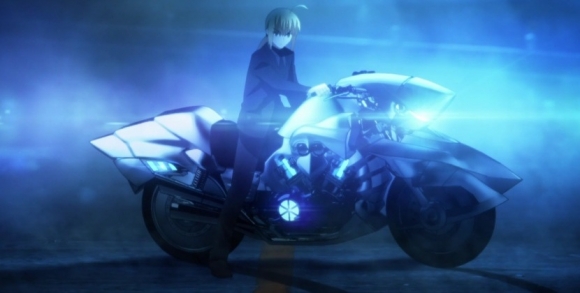 For English-speaking Fate fans, learning about the events leading up to "That fire, ten years ago..." has been a long time coming. With a bit of difficulty, ufotable managed to get the wheels spinning at a reasonable rate to bring that story to its inevitable conclusion before I lost interest. Fate/Zero is not a rousing success, but I'm not about to start pining for the days of Studio DEEN either. What Fate/Zero is, however, is a respectable adaptation of a Type-Moon property that succeeds in balancing out a history of awful to mediocre animations based on Kinoko Nasu's works.

Fate/Zero immediately returns to the normal course of events after the abrupt shift in focus into Kiritsugu's background. The Kiritsugu team slips from the forefront of attention in favor of the last sympathetic characters left in the story, Rider and Waver. Ask any F/Z viewer who the best characters are and they're likely to answer with this pair. Of all the Masters and Servants in the story, Rider and Waver's bond is the most convincing formed throughout the show. Amidst all of the misery and treachery the other Masters involve themselves in, the relationship Rider and Waver forge through experiences shared in battle is one beacon of positivity that keeps the show from collapsing under it's own weight. The predetermined results of the Fourth Grail War won't allow Waver to win the fight, but the team is given a proper send-off from the story as Rider clashes with Gilgamesh to prove who has the stronger Noble Phantasm. The writing peaks before even touching on the actual climax of the show in a scene where Rider acknowledges Waver as his closest companion, a moment that expertly melds tragedy with the animator's touch for embellished crying. 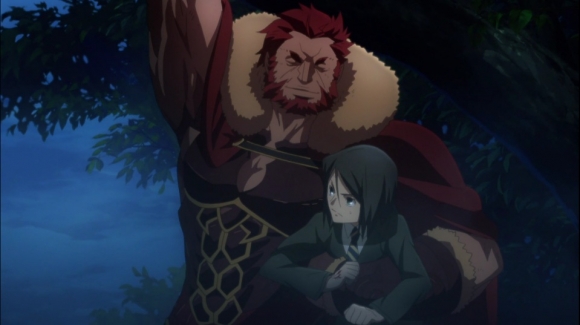 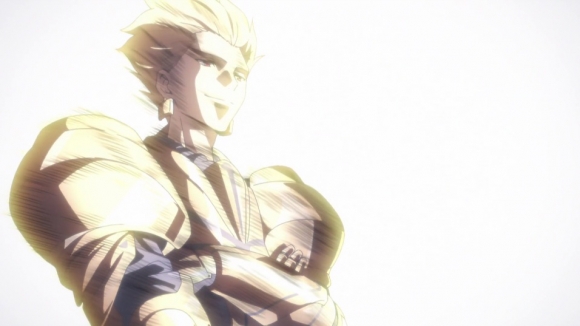 With Rider's death a notable exception, the show struggles to handle some of the most vital events in the story in meaningful way. Kariya, Berserker's master, finally received some extended screentime in Episode 8, but it's mostly a huge misfire for his character and the show as ufotable clumsily animates a disturbingly sexual strangulation scene. Not even Gilgamesh is entertained by the scene as he and Kotomine once again sip wine from a distance and plot against the other Masters. Iriasviel and Maiya, both present since the start of the show and closely tied to the protagonist, Kiritsugu, get written out simply by being either in the way or a cup. The revelation of Berserker's identity seems too scripted to throw off Saber's ideas of kingship just before Kiritsugu forces Saber's hand into detroying her dream of attaining the Grail. 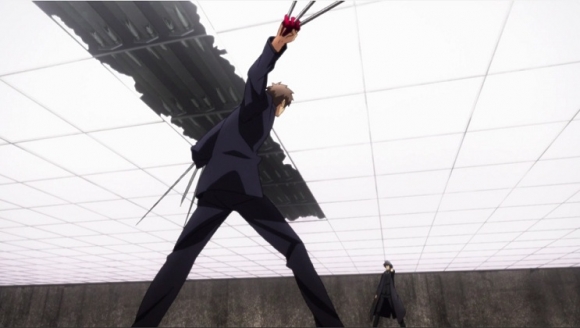 The sloppiest scenes in the show though are either Kiritsugu's fight with Kotomine in Batman's garage or the string of moral dilemmas Kiritsugu confronts after being swallowed up by the Holy Grail. Both are scenes that don't shy at all from ripping off Christopher Nolan. For a show that has been handled with such reserve and care up to this point, the mess that is Episode 11 is all the more apparent. On top of borderline plagarism, a new featureless character that lives inside the grail is introduced right at the end that might require a trip to the Type-Moon wiki to fully comprehend. In this one instance, the writing might have reached too hard to set up the events of Fate/Stay Night. 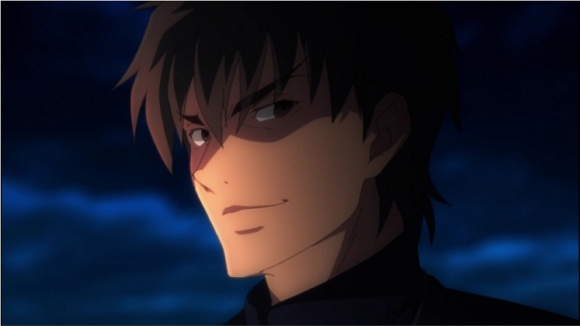 Despite dropping the ball in a major way, everything is brought together succinctly by the final episode. Kiritsugu's character, partly out of necessity, is redeemed, and the image of the fire of Fuyuki City following the destruction of the Grail isn't deadened at all by earlier faults in the show when it finally arrives after an eternity of foreshadowing. As cool as Saber in a Suit (on a Motorcycle) is, she's left high and dry back in her time without anything to say for her efforts except heaps of doubt on her reign as king, which is just the perfect note to leave on before F/SN. The absolute best moment though has to be Kotomine stiffling laughter before Rin at her father's funeral after having presided over the service himself. After botching his last couple of attempts in pursuit of "entertainment", Kotomine acheives S+ rank villainy when giving back Rin the dagger he used to kill her father, all the while grinning as Rin cries her eyes out. I'm sure Gilgamesh was proud.

So Fate/Zero didn't change my whole perspective on anime. I'm okay with that and the experience will likely help me when I meet other people who aren't in love with my favorite cartoons either. Because of the Fate name, I hung to every weekly episode. Yet I hate to say it, Fate/Zero commits the ultimate crime as entertainment by being dull and sluggish on far too any occasions. What will remain with me after series end are moments without any context: Saber wearing a suit while riding a motorcycle, Gilgamesh inexplicably losing all of his clothes after the Grail is destroyed. Most of Nasu's readers are accustomed to "dull and sluggish" though, so as a "Fans Only" product, F/Z is already ahead; the first season Blu-rays are some of the best-selling in the history of the medium. The brand is as financially comfortable as can be, and ufotable isn't a bad choice as an established go-to animation studio for Type-Moon. On the distant horizon of baseless speculation, here's hoping they do a Heaven's Feel adaptation proper justice. 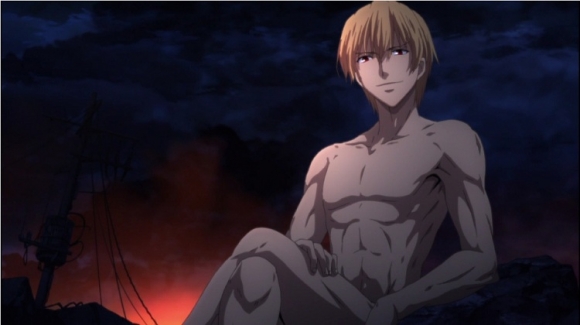 Fate/Zero is now streaming on Crunchyroll.