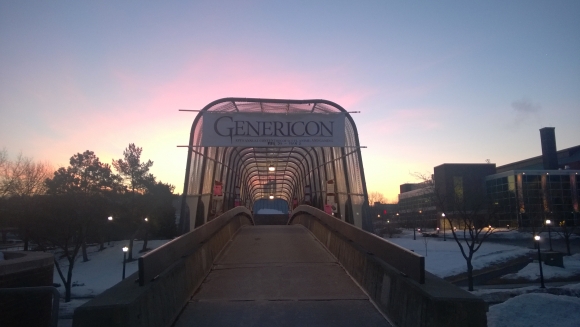 My favorite thing about Genericon — a sci-fi-turned-multi-fandom convention in Troy, NY — is that it runs nonstop from its 5PM Friday opening until its 5PM Sunday "GO HOME!" Panel programming may pause in the wee hours of morning, but there are plenty of other opportunities with which to whittle away the meantime: video rooms, electronic and tabletop gaming, LARPing —all the usual con mainstays but at … unusual hours. Staying at the con 24/7 is not prohibited, but sleeping there is. While some may view this as passive-aggressive evacuation, I take it as a challenge! After all, I got a late start and had to make it up somehow.

The road to Genericon XXVII was dark and cold … at least until the heat came up in the cabin of my 2002 Hyundai Accent (complete with Powerpuff Girls floormats and Fullmetal Alchemist decal). From thereon in, the trip was dark and warm. I’d just finished answering questions about poetry from the bottom of a pint of smoked porter in New Jersey on Friday night when I realized I had a con to get to. sci-fi, anime, and gaming: Genericon was calling. Sure, I woke up at 5 am that morning to make chili, but that gave me just enough fuel to answer. 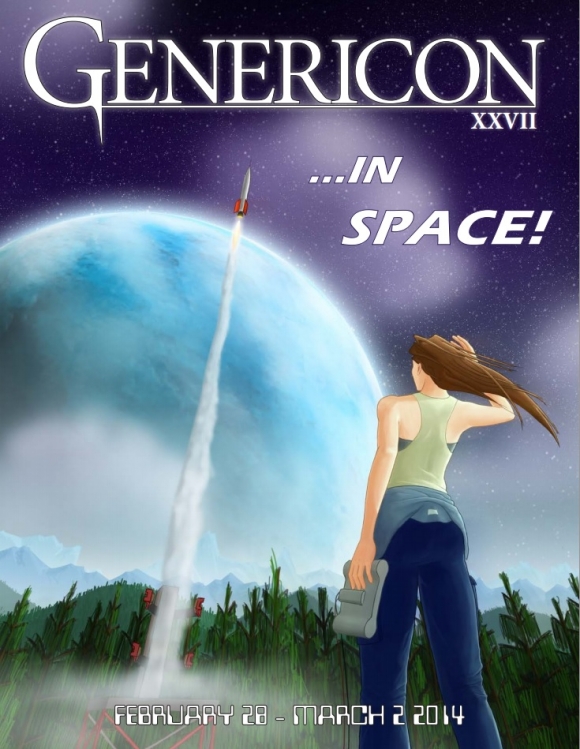 “Of course you can get your badge,” one of the graveyard shift staff stationed in Ops (Operations) replied, “that’s why we’re here!” I couldn’t tell whether his ecstatic tone was a result of it being the third hour after midnight, his genuine enthusiasm for his position, or the fact that my mere presence there justified his own, but it didn’t much matter; we both occupied the same lot: stuck at a con of our own volition. The person who I was going to stay with was probably already asleep, so I fled with that consideration to the only respite I knew: anime.

It was something past 3AM, and the choices were Psychic Wars or M.D. Geist; surely Anime Coordinator Annie Sardelis was either a sadist or a genius. Regardless, the "THAT Guy" in the audience of maybe fifteen people, who read every single bit of on-screen text just in case everyone in attendance was blind and 98% deaf, ruined what could’ve been a very laughable experience. Space piracy was to follow, but luckily in another location — one with a captain’s chair … OK, several captain’s chairs.

The chairs of Video 3, even without the influence of abusive substances, required an odd mix of submissive surrender and reckless abandon. I spent more time amused by my own efforts trying to stabilize myself than I did watching Space Pirate Captain Harlock attempting to resurrect his legacy with the aid of his barfly crew. There wasn’t a "THAT Guy" in that room, but there was an oddly persistent hiccup, which, like a water drip, raised my ire in steady intervals until my bloodshot eyeballs beamed wide and accusatory. Otherwise, after a couple of hours (and many a suppressed chuckle) battling gyroscopic balance, programming called for a switch to Trigun. But since that couldn’t be found, a quick substitution of Panty & Stocking with Garterbelt filled the void.

I watched it stream, I own the DVDs, and I have watched the dub, but my favorite thing about watching P&SwG is doing so in the presence of those who’ve never seen nor heard of the series. This is the best reason to visit video rooms at anime cons. The audience's disbelief, as opposed to my early sleep deprivation or the show’s excellently executed jokes and voice acting, was the source of my multitudinous grins. But the hiccupping persisted, and after vicariously reliving my initial fascination (and in want of some serious leg stretching), I decided to leave my seat to greet the sun for some fresh air and silence. It was 5 degrees Fahrenheit. I saw the sun, part of its promising rise, and my breath and quickly returned to the heated, hiccuppy oasis of Video 3, where, by then, they’d found the missing Trigun DVDs. There I remembered laughter in spite of circumstance, recalling a show I’d long since forgotten and all the joy it brought. But time is linear and, at times, unforgivingly slow. Now at a little past 24 hours of consciousness, I decided a sustained bout of cold air was in order. After walking to the door and quickly back in, I remembered my duty to check out the Video Gaming room.

To be fair, nothing was on the schedule that early. But as I stepped over the last of the stairs, I couldn’t help but laugh at the bodies I saw sprawled on the floor to my left: either sleeping or in the midst of a lethargic LARP. The occupants of the video game room, while more conscious, weren’t any more defined. When I popped my head in, Staff shirts were clustered together MST3K-ing the second installment of the Star Trek reboot; not a single monitor attached to a video game machine was turned on. If I hadn’t already seen the movie, I might’ve stayed. But I had, so I left. With the sun in the sky and panels close to starting, I moved in to start my ping-ponging between the con’s two panel rooms and Main Events A and B. (To read more about that, check out the forthcoming Ani-Gamers Panel Report.) In-between sitting down in hour intervals for various demonstrations and listening to fans squee over or attempt to justify their fandom of choice, there was ample time (due to egregiously large and numerous programming gaps) to roam the hall. The level of energy continued to rise as attendees poured through the front gates wearing costumes from all walks of geekdom. By midday, the Great Hall saw congregations comprised of titan slayers, maids, Homestucks (who asked ya?!), elves, a dandy guy form the space, …was that a Sengoku period-style Sailor Moon? Yes! Some were modeling Lolita fashion, some were cosplaying old cartoons, some were cosplaying newer games, some just threw on whatever they found on the way to the con. All were busy talking amongst each other excitedly or posing silently at the business end of strangers’ cameras.

While costumes were pretty or pretty interesting (homespun cosplay always warms the cockles of my heart), some were also pretty in the way; instances where neither poser nor stalker chose to abandon their across-the-thoroughfare-photo-session to let the ever-queuing throng through numbered many. Needless to say that as the hours inched on, my patience wore thin. I’m sure I appear as an inconvenient blur in many such attempted shoots. Likewise, crowd control was not even present at the bottleneck which was the badge check point of entry, where, for some reason, an errant vendor table caused traffic troubles during all but the lightest traffic flows throughout the entire weekend.

Navigation anywhere else was absolutely unhindered. The grounds were not so full of people as to hinder a healthy stride, and clear, comprehensible directional signs were EVERYWHERE. These came in handy particularly when finding my way to the vendors, even if I didn’t unintentionally follow a young woman, a stranger to me, who was literally narrating every aspect of her trek there. Repeating, almost singing, “vendors” with a ring to her voice, she oft ad-libbed common objects as new verses. “Stairs,” she’d exclaim as she encountered stairs. “Doors,” she’d grunt as she opened (and held) a door. (Thank you!) Whatever the vendors area (Dealer’s Room) lacked in geospatial relativity to the con proper was more than made up in … materialism. Aside from a rather sizable manga centerpiece, the vendors were smart in their choice of showcased wares. Items which would incur large shipping risks/costs if bought over the Internet or those that would be bettered by a pre-purchased fitting seemed sold in abundance, whereas media almost seemed an afterthought. The usual anime food tie-ins were all there, with the very sad exception of melon bread (Where’s the Shana love?); dice and other tabletop supplies stood at the ready for those discovering they forgot their own or misplaced them along the way; and model kits with fragile wings and figurines with dainty waists abounded—unaffected by any would-be manhandling by the USPS. After I’d done my walk-around and snapped a few photos (inadvertently catching figure buyers…ahem…inspecting the goods), my next stop was the stepchild relegated to the con’s basement: Artists’ Alley. The three or four rooms comprising Artists’ Alley were in serious want of flow control. Most if not all rooms had 2 doorways, and even just an enforced “entrance only” and “exit only” policy would’ve helped alleviate some confrontational traffic patterns. Then again, who’d want to leave?! The best thing about this incarnation of Artists’ Alley was that only one room was 99% fan art prints, while the other rooms were 99% print-free. Plush and jewelry seemed the order of the day, with one artist in particular catching my eye with bedazzlements made from electronics (broken bits of PCBs, capacitors, batteries, etc.).

Speaking of, my batteries were low. Luckily Ani-Gamers, Vertical, Inc., and others were going to get food. This foreshadowed my downfall. Despite knocking back a shot of Turkish coffee and devouring the residual sludge like Garfield on a Monday, no matter how many stairs I climbed or buildings I ran between, nothing could negate the food + empty stomach = sleep formula. After roughly 36 hours, some duration of which included me almost falling asleep in the front row of a panel (thank heaven for voice recorders!), I grabbed an hour nap which got me through 6 more hours of con.

By the end of the last panel I attended on Saturday (actually Sunday at 1AM), I’d been without sleep for 44 hours over a 45 hour period—delirium at its peak. I was starting to see people in costume I could’ve sworn were dressing as friends of mine; I’m certain there was an Uncle Yo clone and someone dressed as Badass Viga. Small hallucinations started occurring on such a regular basis that I thought I was IN an anime. Naturally, this was the best state in which to drive (my passengers will attest to this). 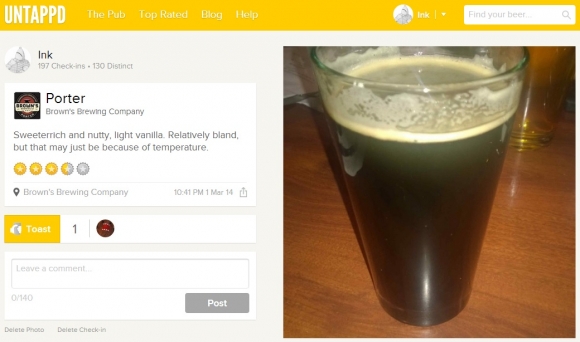 Why drive? Because Troy has a few pretty wonderful eateries and bars peppered throughout the downtown area, which is but a few minutes away from the con. Several delectable-sounding establishments were rattled off to me, but the splendiferous discovery this year was Brown’s Brewing Company. Forty-some hours of unanswered consciousness had nothing to do with that fact. The burger I had there, with smoked gouda and baked-in delicious, was amazing enough even without the several tasty beers I saw on the menu. Also, Dinosaur Bar-B-Que is a must-visit staple for BBQ and decent microbrews. My visit there on Sunday afternoon was to be, sadly, my farewell toast to Troy. After a good drink to compliment a Flinstones-car-tipping side of ribs, I could hear New Jersey beckoning. But while returning (and trying desperately to not fall asleep at the wheel), I could hear a steady voice repeat: “See you next year.”