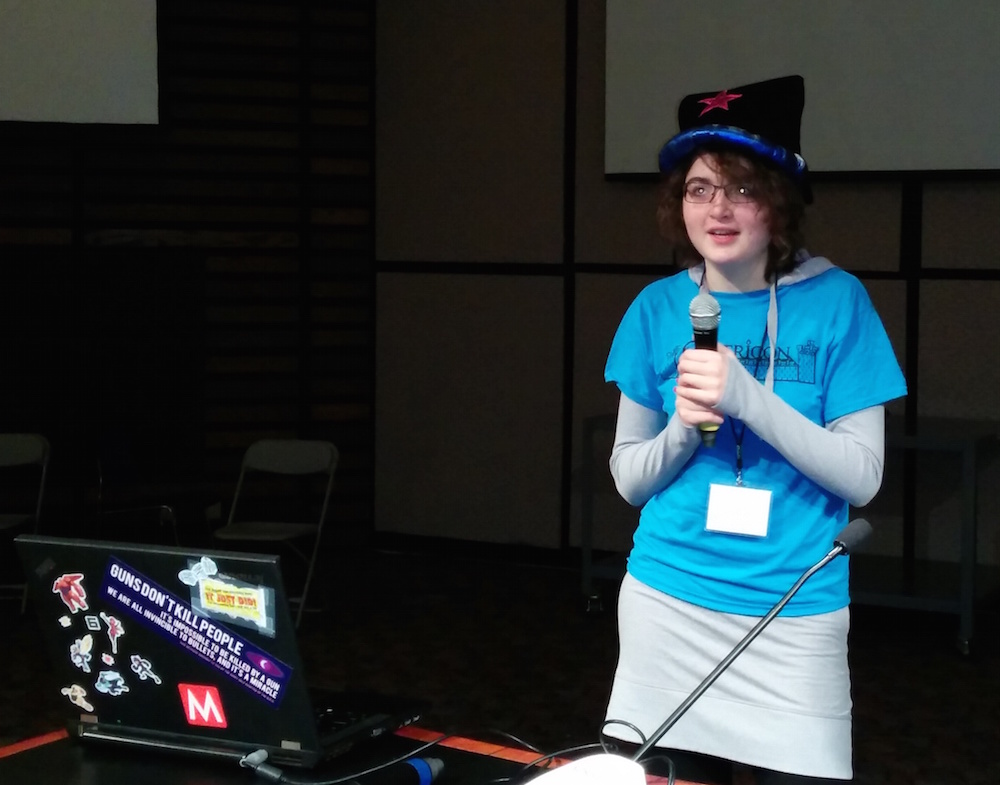 Some people will travel across continents and seas to attend a convention, to spend a weekend sleeping in unfamiliar hotel beds with unfamiliar bedmates, sometimes sleeping right there on the convention hall floor, with one eye open for prowling security guards clearing rooms at closing time. Attending a con means sacrificing comforts and lowering one’s expectations of cleanliness and nutrition, sometimes to the point of bodily harm. Without the endlessly coiling lines and sweltering heat, Genericon has little in common with the major cons that draw in tens of thousands of attendees. For me, Genericon has become less about the content offered and more about seeing old friends and walking through familiar grounds.

Even when I start to worry about the sparseness of the programming, it’s still one of my favorite cons. I have to be impartial and a touch critical though. Genericon is a remarkably well-run convention without much in terms of headline-worthy content. Incidentally, seeing old friends and headline-worthy content crossed over thanks to the appearance of Internet-famous Crunchyroll mascot and Featured Panelist, Evan ‘@VamptVo’ Minto. On this blog especially, we’ll take advantage of our platform to say how great we are and how amazing our friends are at delivering clever insights into Japanese cartoons, and really nothing has changed my mind. I knew Evan’s panels would blow away anything else I’d go out to see, simply on the basis of the guy’s years of experience and his obsessive pursuit of perfection. Keeping that in mind is how I avoided disappointment when I actively sought out the worst panels at the con, a challenge that I only managed to take so far. 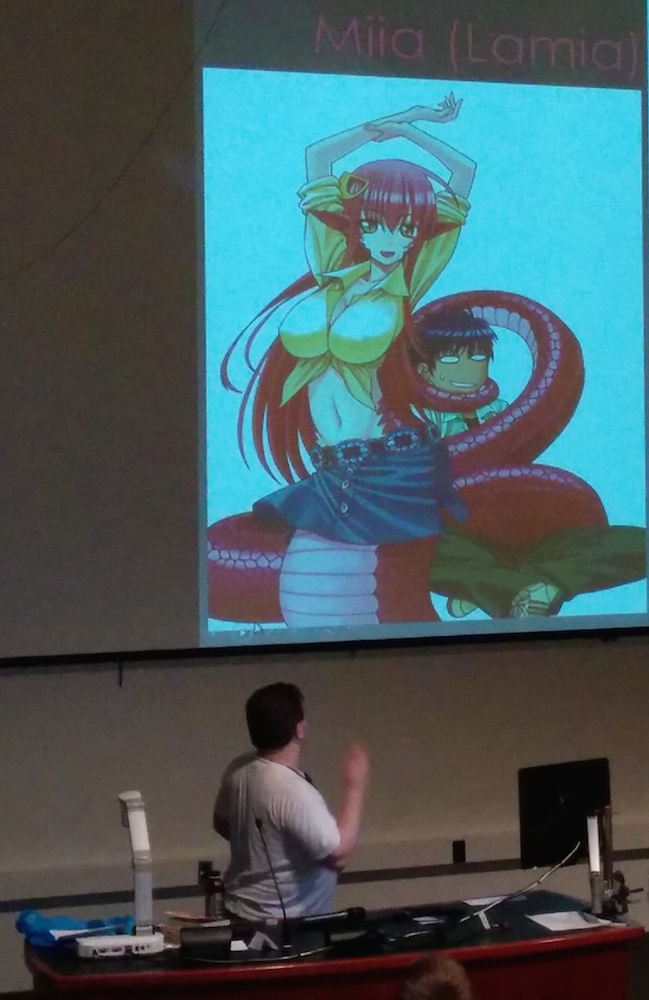 I don’t want to hurt anyone’s feelings, but it’s something I won’t be able to avoid when talking about ‘Monster Musume: The Women Behind the Myths.’ This was the first panel I attended at the con, a midnight panel with the ever-alluring 18+ designation, and I convinced Evan to come along for morale, though he ended up needing it more that I did. With a Dunbar-esque naming sense in the title, I had higher expectations for a panel that committed just about every cardinal sin there is to commit during a presentation. The number one rule for panelists is to never put all your notes in the actual presentation. When you’ve got seven bullet points with a paragraph for every bullet that you’re going to repeat verbatim to the audience, it’s no longer a presentation, it’s a torturous hour of nervously excited shouting and frequent lusting after monster titties. Overall, it was kind of tough to get any idea of the women behind the myths. For the record, slime girl is best girl.

The panels I genuinely enjoyed all turned out to be the ones that I had no presumptions about.

Genericon was rife with terrible programming but I didn’t hate myself enough to go to every bad panel. The panels I genuinely enjoyed all turned out to be the ones that I had no presumptions about, the ones that others in my group threw in as a suggestion and I had just enough curiosity to check out. I descended from my high horse to make awful Play-Doh monstrosities until 1 in the morning on a Sunday (Clay-O-Rama), and then got right back on that horse for Anime Name That Tune when I was the first one in the room to call the M.D. Geist ending song. Cosplay Dating was hit and miss but it’s not so painful when you’ve got someone next to you to talk about how you can fuck the dog in DRAMAtical Murder. You seriously can fuck the dog, and I heard it’s, like, your brother too. It’s crazy. 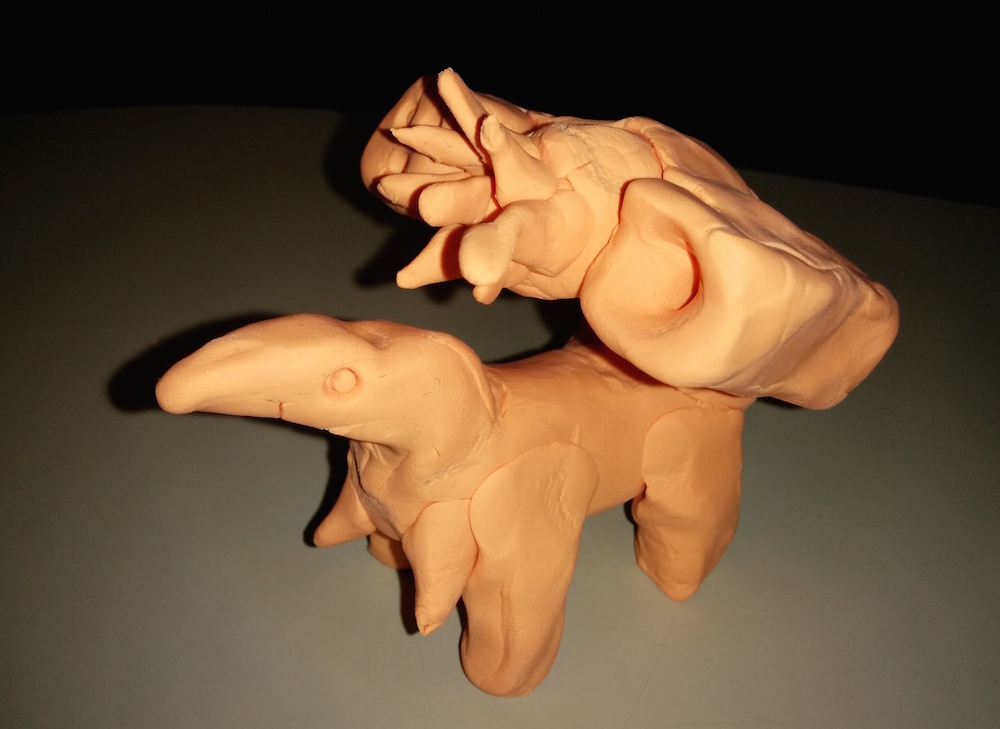 I’ve been dismissive of what was scheduled this year because I wish the convention would be as ambitious as I know it can be. For a student-run event that goes on nonstop for 48 hours, Genericon never once feels like it's going to implode or fly off the rails, which is commendable in its own right given all the horror stories of con mismanagement we hear through the grapevine. The staff is shuffled around every year as members graduate and yet the convention remains as solidly operated as it has been for the last couple of years. My only problem with Genericon is that after five or so years, I'm hit with a sense of familiarity with it all. It's bad when I've got people in my group with a worse memory than I do asking me, "hey, haven't we seen this before?" I don't have any fears that the con will grow stagnant, but I'd rather not be motivated to make the trip just to ironically sit in on some bad panels.

For a student-run event that goes on nonstop for 48 hours, Genericon never once feels like it's going to implode or fly off the rails, which is commendable in its own right.

By the end of a dire AMV show on Sunday, I was ready to call it in but all this time, I couldn't help but feel like someone vital was missing. Shoutouts to fellow Ani-Gamers blogger Ink who couldn’t make it this year. Even if it sounds like you didn’t miss much, trust me, we missed you. I’d be remiss not to mention Ed Chavez, Vertical Comics’ Marketing Director and returning panelist who, aside from providing some much-desired legitimacy to Genericon with his presence, is always down for a stroll to the pub. With 28 Genericons in the hole, it’s not the kind of event I’d consider in its infancy, but it is a convention that is in the process of latent growth. This year wasn’t exactly reflective of that, but I believe the convention is just one knockout AAA guest away from taking it to the next level.