Spoiler Alert: If you haven't seen Fate/Zero and you're looking to protect yourself from plot spoilers, you probably shouldn't keep reading. Just sayin'!

With every passing year, it gets harder to forgive those who are duped by Type-Moon and associates into thinking their latest projects are packed with action and spirits burning on the battlefield. Anyone who has read Fate/Zero's (F/Z) parent story, Fate/Stay Night (F/SN), knows that the real battle is not the one waging between the Master's Servants, but maintaining interest across hours of cooking scenes and getting readers/viewers to swallow piles of Holy Grail War lore. By stretching focus evenly across its ensemble cast, F/Z suffers from a different sense of immobility than F/SN. After a satisfying, if unsurprising, two-episode fight resolving the cliffhanger from F/Z Part I, the series finally shows its true nature in episode 3. 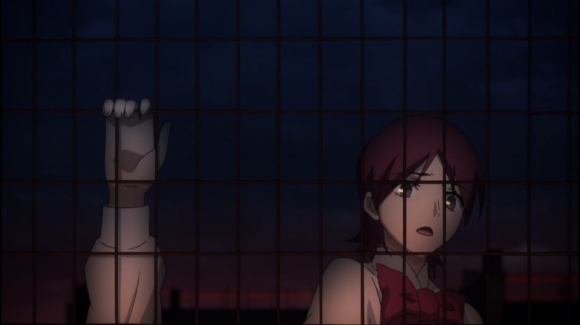 As is the case with most anime today, the story doesn’t start moving until someone loses a body part. While the Caster team getting snuffed out in episodes 1 and 2 may  provide the first major deaths in F/Z, that spectacle doesn't shake the rules of the game quite like the systematic execution of Lancer’s team. Quietly and efficiently, a major contender to win the Grail War is eliminated by an underhanded play from Saber's master, Kiritsugu. It’s a hollow victory for Saber’s team and especially Saber, who has founded her ideals on the concept of chivalry and honor in battle. Saber and her master are so disgusted with each other that they can only communicate through Kiritsugu’s proxy, Irisviel, even while standing only a few feet from each other. In less than half an hour, episode 3 turns Lancer’s master into a sympathetic character, rattles Saber’s image as a hero, and gives the best depiction thus far of the kind of man Kiritsugu is. 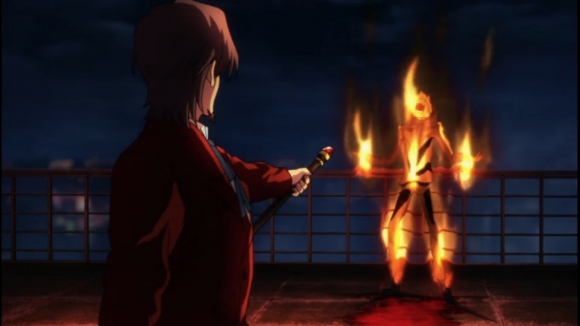 With the character pool two Masters short of the original seven, the lack of a compelling villain is noticeable. The only remaining Masters suitable to assume the role of the villain are Tohsaka Tokiomi, Master of the servant Archer, and his disciple Kotomine Kirei. Tohsaka is only mildly dislikeable, and he’s far too clean-cut to be interesting to watch. Truth be told, the most fault in Fate/Zero’s pacing can be linked back to Tohsaka and those around him. As vital a character as he is in the fiction, even his own servant and disciple agree in secret meetings that Tohsaka is a bore. Kotomine and Archer themselves don’t quite electrify in their numerous scenes of vaguely homoerotic conversation held in Kotomine’s dimly lit study, but the developing chemistry between the two has far more potential to generate the “entertainment” the two seek in the Grail War than if they stick with Tohsaka. Without any need for elaborate preparation, the perfect scenario to eliminate his master from the competition and assume his place falls right into Kotomine's lap. It’s easy to see where the story is going when Tohsaka says goodbye to his daughter, Rin, under the presumption of going away for a long trip to devote himself to winning the Grail War. It would be sadder if I weren’t rooting for Kotomine and Archer to liven up a war that has been fought too cautiously until this point.

The death of another master immediately after the defeat of Lancer and company eases the shift in focus to Kiritsugu’s past for episode 5. The first half has such a radically different tone to the rest of the series that the episode begins watermarked with the Fate/Zero logo to assure everyone this is still the same show. F/Z returns to the usual grim state of affairs when Kiritsugu’s older sister figure handles a sample of revival magic that proves to be far beyond her control. At an early age, Kiritsugu has not yet adopted the cold-blooded killer nature viewers are familiar with, and this results in his refusal to kill a close friend. Consequentially, the entire village he lives in is massacred, and he is forced to witness the destruction he alone could have prevented. Instead of blaming himself however, Kiritsugu aims his anger at his father for conducting dangerous research at the cost of other human lives.

Experience with Kinoko Nasu's original story pays off in seeing how key ideas and situations of F/SN are mirrored under different circumstances. Kiritsugu's message to Saber at the end of episode 3 slammed some of Nasu's writing on the role of the hero, and now episode 6 looks at what it really means to kill one person to save many. F/Z continues to look at a young Kiritsugu's growth into a cold and self-possessed assassin after he's taken under the wing of Natalia, a gun-for-hire met during the chaos in the village. For years, Kiritsugu's only ambition is to become strong enough to prevent anything like what happened in the village without any casualties except for those responsible. That straightforward sense of purpose and nobility that defined Shirou's character in F/SN was also once a part of Kiritsugu, even if it arises from depictions of Kiritsugu as a child soldier. The retrospective look into Kiritsugu's development comes to an end when he is forced to choose between allowing his mentor to live at the expense of an innumerable amount of victims or own up to his ideals and make the decision that will hurt him the most. Unlike Shirou's Power of Love moment at the climax of the final route in F/SN, Kiritsugu cannot reconcile how to keep the most important woman in his life and his dream of being a hero.

As a prequel with a long-since established conclusion, Fate/Zero is denied the chance at ending in an unexpected way. What matters is how the story arrives at its conclusion, which thus far has had its share of surprising and tragic moments. It also has long periods of characters simply talking in dark rooms about themselves and what they want to do as opposed to going out and acting on their desires. Some fans like that and call it character development, but it doesn’t necessarily make for good television. F/Z has hit a good pace now three-fourths of the way in, which is only forgivable depending on how much the Fate name means to the viewer. The writing hasn't been as interesting as I imagined Gen Urobuchi would have been capable of, yet I keep coming back with renewed expectations. At this juncture, ufotable has continued doing a decent job adapting Fate/Zero. Viewers only needs to take a momentary look back at Studio DEEN's Fate/Stay Night adaptation to realize how blessed they truly are.

Fate/Zero is now streaming on Crunchyroll.