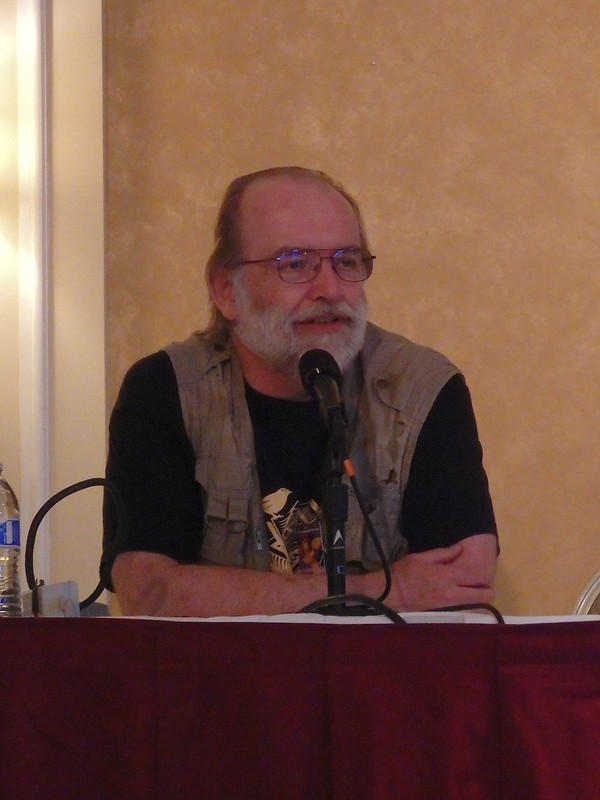 Fanime's panel schedule might not have been as impressive as I had hoped, but I attended a few standout panels at the con, from both fans and guests. That said, I found that guests outweighed fans more than usual in terms of panels worth seeing. As is typical here at Ani-Gamers, I've written up all the events I attended in full (leaving out the ones I popped in for then left) for you fine folks to reference next time you're perusing your FanimeCon schedule.

NOTE: Part of the reason this list is so short despite FanimeCon running for four days is that con staff had a confusing policy wherein press could only use their badges to skip panel lines if they showed up 5-15 minutes before the panel. As a result, I was unable to attend a number of panels I had originally intended to do writeups for.

Anime and Manga for Parents

My first panel of the convention was hosted by returning Guest of Honor Gilles Poitras, a longtime historian and author on anime and manga subjects. The panel began with Poitras laying out some basic introductions to anime and manga, but soon he turned it over to Q&A. Luckily the audience was pretty mature and subdued (as you might expect from a panel for parents), so the Q&A actually made for some interesting conversation. Topics covered included the attraction of anime for young people (Poitras posits that the focus on depictions of emotion is the main draw), the difficulties and appeals of cultural differences, and of course, lots of recommendations both for parents looking to explore their kids' interests and kids looking to expand their parents' horizons. Said recommendations included Tokyo Godfathers (and anything by Satoshi Kon), Garden of Words, Nadia, Summer Wars, Rurouni Kenshin: Trust and Betrayal, and Sword of the Stranger. But the highlights of the panel were stories from parents who found anime through their kids. One mom told of how she defends her son's passion despite her religious family's misgivings, and another told me after the panel about how her own faith drew her into the story of Fullmetal Alchemist: Brotherhood after her son showed it to her!

Takami Akai and Noir Q and A Panels

I recorded both of these and will try to post transcripts for them, so I'll combine them here into one short writeup. Takami Akai is a Gainax animator and designer most well known for creating the character designs on the Daicon opening animations and working on the Princess Maker game series. Noir is a singer and writer as well as the current Marketing Director at Gainax, heading up the department that figures out how to merchandise and publicize the studio's series. Despite not being major creative staff at Gainax, both guests had insightful thoughts on the studio and the anime industry as a whole, even with the typical flood of inappropriate fan questions at the Q&As. 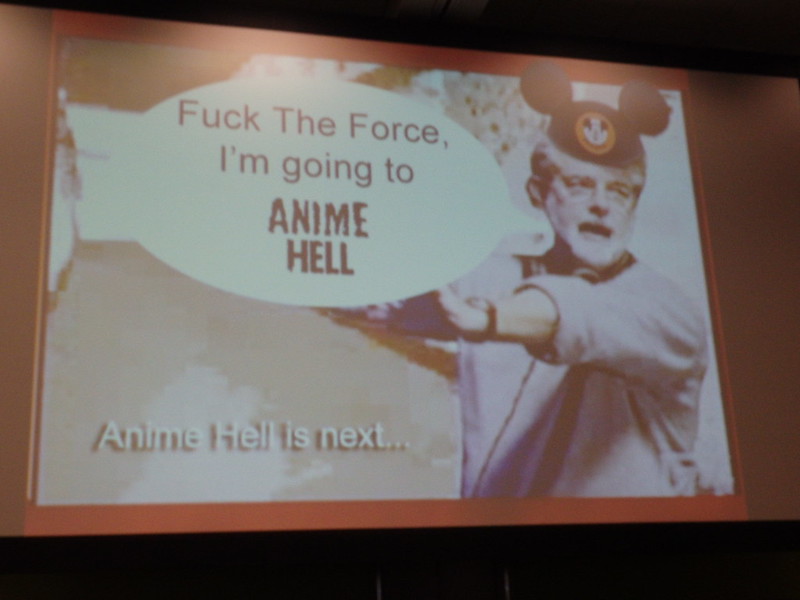 Reviewing Anime Hell is kind of cheating, since it's been consistently great every time I've seen it, regardless of who's running it. Fanime's resident Hell curator is Ryan Gavigan, who put together the typical barrage of nonsensical pop culture clips (very few of which were actually anime, true to Anime Hell form), including a series of Godzilla clips and advertisements from both Japanese and US versions, a clip of a "Barbie Flamethrower," and a Breaking Bad parody that spoiled me on the show's ending despite me immediately closing my eyes and covering my ears. Anime Hell is an experience well worth your time anytime it shows up at your local anime convention. There's no pretension, no dull slideshows, and no monotonous Q&A's. It's nothing more and nothing less than a series of hilarious videos, most of which you've probably never seen before, expertly mashed together into a two-hour-long comedy show. If you get the chance to go, don't miss it. 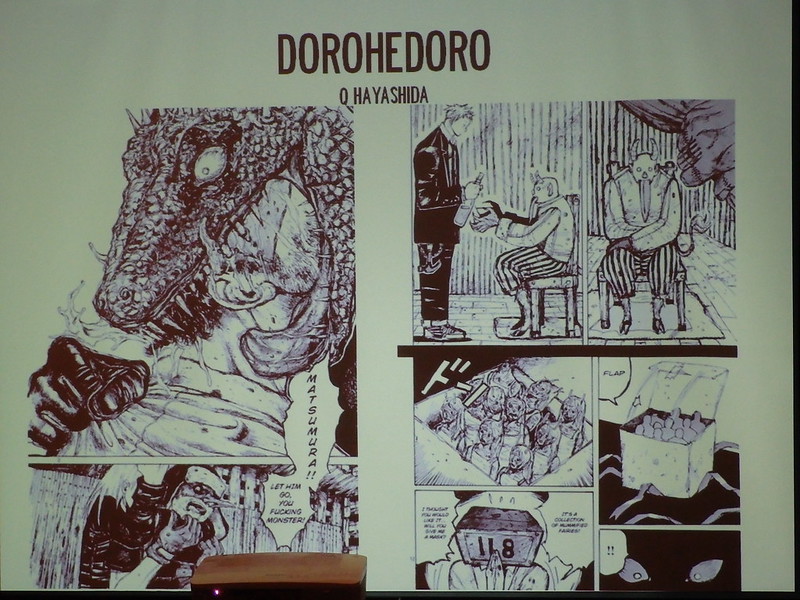 Late night, 18+, and hosted by a bunch of slightly tipsy panelists, Weird Manga was certainly an experience. I came in partway through the list of titles, which included lots of manga from experimental artists like Usamaru Furuya and Suehiro Maruo, as well as works from well known artists with bizarre streaks, like Osamu Tezuka and Go Nagai. The manga selection was excellent, and the panelists did a great job explaining the basic premise of each series and what makes it so unique, but alas, as we know all too well here at Ani-Gamers, alcohol is a double-edged sword. The panelists were funny but somewhat disorganized, with off-topic remarks and a poor sense of pacing, leaving me a little disappointed that these clearly knowledgable folks put together such a sloppy panel out of so much great content. But hey, if you're going to talk about My Balls in front of an audience of strangers, I guess you should probably be just a little bit drunk. 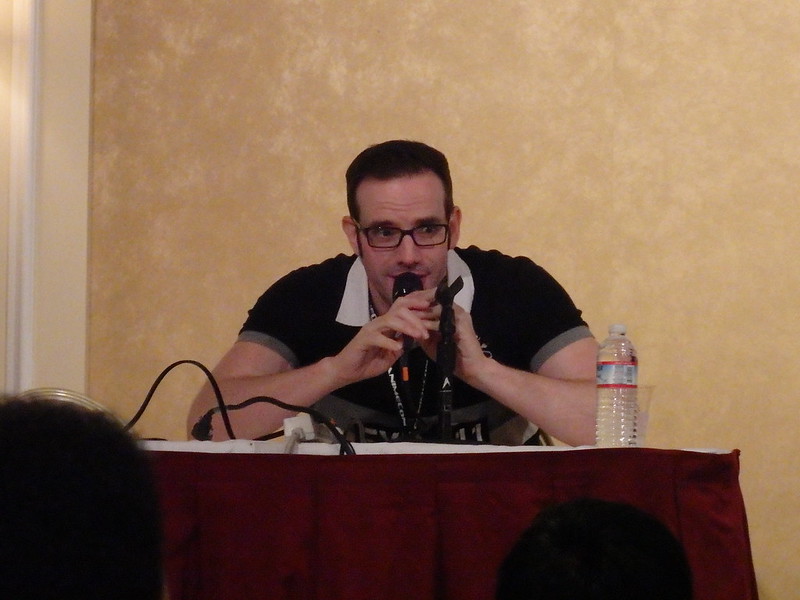 This was my first exposure to English anime dub writer and actor J. Michel Tatum in the flesh, and to my surprise, he’s an excellent speaker. Articulate, funny, and charming, Tatum bounced off his excited audience extremely well in this panel about adapting translated anime scripts into dub scripts. I was mildly interested in the topic, and was looking forward to hearing about how dub writers work with the Japanese writers to iron out hard-to-interpret characters and situations, but instead, Tatum handed the reins over to the audience. In some panels this works out fine, but since Tatum really likes going in depth on every question, he only got through about six before the hour-long panel wrapped up. In that time he mostly covered general writing topics from young people curious about how to write their own novel (or fanfiction, as it were), and only occasionally touched upon his experiences adapting Attack on Titan and Steins;Gate. When this did happen, these topics resulted in more interesting information, such as a particular scene in Steins;Gate (apparently something in a car — I haven’t seen it myself) that actually affected Tatum so much that he had a breakdown in the booth. 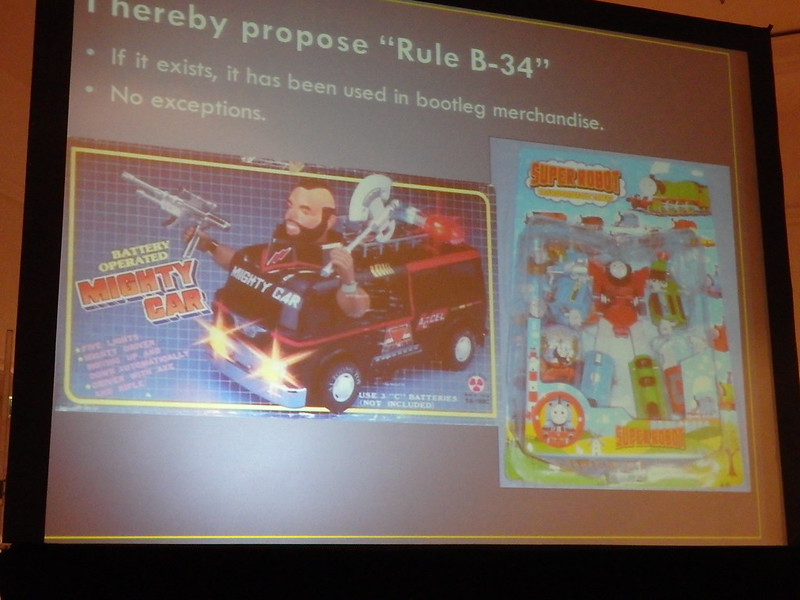 Hosted by video game writer Heidi Kemps (a.k.a. Zerochan), this panel covered a number of different types of bootlegs, showing off particularly ridiculous ones that the panelist had come across in her perusing convention dealer’s rooms and online stores. Heidi covered a lot of ground, from toys to video games to merchandise to animation, including a couple bits I’ve seen in some of Mike Toole’s panels. The merchandise section was particularly informative, and she emphasized that most of the branded anime bags fans were toting around at Fanime were probably bootlegs, created without permission from the original creators. Some highlights were “Sense of Right Alliance” (a fake Justice League featuring Batman, Spider-Man, a Power Ranger, Shrek, and a car from Cars), A game called "Super Wonderful Mario,” and the classic Korean Gundam ripoff “Johnny Destiny: Space Ninja.” My only complaint: the audience was a bit too involved, yelling unfunny jokes and Internet references at Heidi, who played off of them rather than glossing over it and moving on. 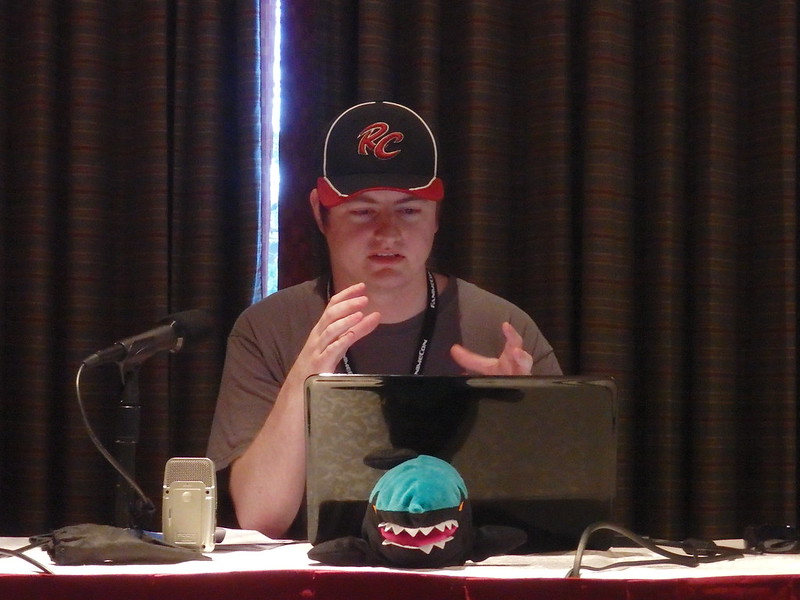 History of Sports Anime and Manga

My last panel of the con was an updated version of one I saw a while back at Otakon. Tom “Calaggie” Langston, Anime Twitter’s resident sports manga expert, went over the history of both anime and manga versions of a number of different sports, starting with obscure post-war Mushi Comics releases like Kurikuri Pitcher and following all the way to modern series like Free and Haikyu. The breadth of subjects was pretty impressive, especially considering my limited involvement in both real sports and sports anime, but the coolest part was how he pulled in real-world sports trivia, using it to contextualize major series and events in manga and anime history. Did you know that Japan’s gold medal win in women’s volleyball at the 1964 Tokyo Olympics sparked the shojo volleyball boom in the ‘70s, or that the popularity of soccer manga Captain Tsubasa created a glut in midfielders in Japanese professional soccer? Fascinating stuff. Despite a slightly shaky delivery and some moments where video clips of anime series were painfully absent, Tom’s command of his material won over the small panel audience.

It's worth mentioning that I didn't get a chance to attend this panel due to a long line, but Sorrows Neptune over at Anime Is Dead did a great writeup. In a rare example of Japanese guests actually presenting rather than answering inane questions, Oreimo director Hiroyuki Kanbe spoke for an hour about the anime production process. I'm super bummed I missed this!