Welcome (back) to the Three-Episode Test, where contributors give you the low-down on what they're watching from the current simulcast season and why. 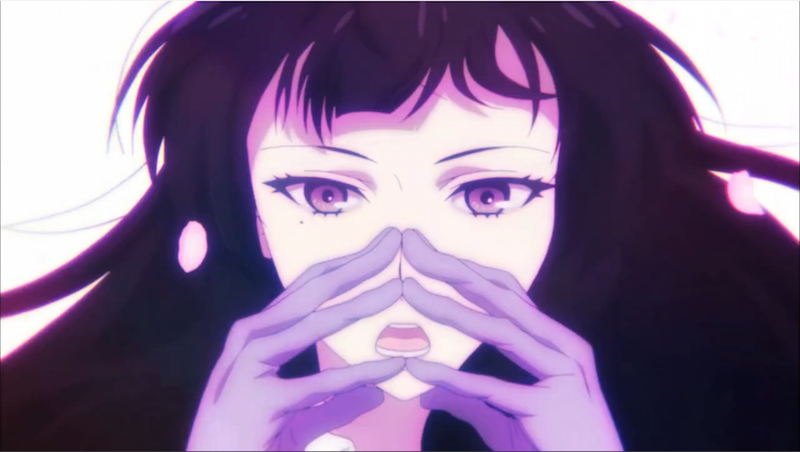 I was initially really excited for this series thanks to its pedigree: Studio TROYCA of Aldnoah.Zero fame is handling animation, and the director, Makoto Kato, worked under the excellent Ei Aoki on a number of projects. Unfortunately, Beautiful Bones has yet to deliver on its promise of mature, adult mystery storytelling. Sure, the main female character is an adult, there are refreshingly few high school scenes, and they’re investigating murders, but despite all that, the mysteries are pretty simple and the story never gets beyond light novel monster-of-the-week monotony. For a show about an adult, it’s ironically adolescent in its sensibilities. The cinematic visual style of Aldnoah is seemingly Aoki’s touch, not TROYCA’s; other than some nice backgrounds and a very pretty (but hilariously incongruous) pseudo-transformation sequence whenever Sakurako solves a mystery, the series features the same lazy camera angles and minimalistic animation as everything else out there. I’m holding out for improvement, but I’ll likely drop this one.

Streaming on Daisuki, Hulu, and Crunchyroll (on a one-week delay) 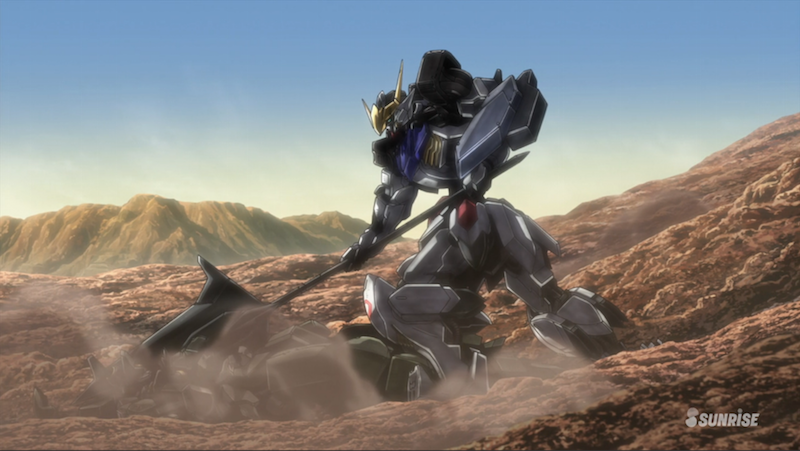 It’s been years since I watched a Gundam series, but I’ve always had a love-hate relationship with the franchise. It’s at its best when tackling sociopolitical issues or pontificating on the death of innocence in war and at its worst when fetishizing the machinery of death and getting lost in juvenile melodrama. Thankfully Iron-Blooded Orphans is, so far, pressing a lot of the "good Gundam" buttons for me. Our heroes are orphaned child soldiers working for a mercenary company that has just taken on a job to escort a princess and resistance leader. The typical lip service to pacifism is present, especially through the responses of the idealistic princess, but Iron-Blooded Orphans is far more sincere and down-to-Earth (or down-to-Mars, I suppose, since that’s where it takes place) compared to some relatively recent entries in the franchise. The mercenary base feels like a family, and once the politics get out of the way in episode 1, there’s a lot of focus on the relationships and emotions that happen between the battles. But most shocking is just how bleak Iron-Blooded Orphans is. The kids don’t just die, but they kill others as well — sometimes execution style. When the gundam (called Barbatos) stabs the mobile suit of a general wracked by guilt for having to fight children, blood lands on its face: a visual symbol of tainted innocence. There has been a surprising lack of robot fights thus far, which is fine by me (especially since the few fights all been nicely animated with tight, steady pacing). I’m happy to see Gundam going back to its roots of being about the horrors of war rather than just the shiny robots, though a long history of hit-and-miss Gundam series means there’s a whole lot of caution in my optimism. 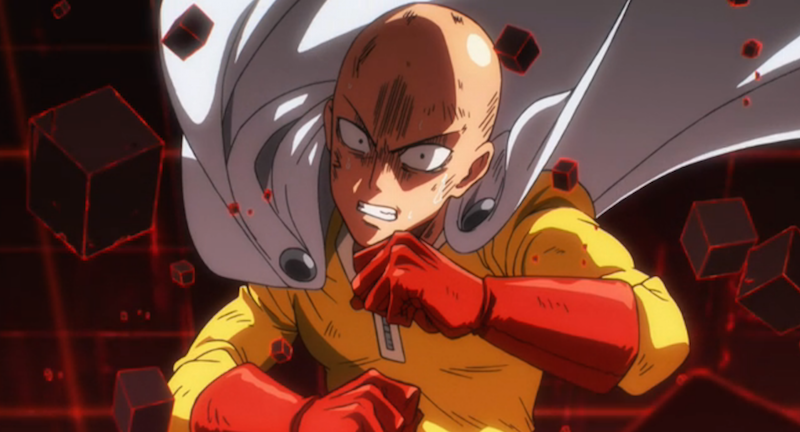 Having to watch anything on Hulu is a bit of a drag, but One-Punch Man is totally worth it. I should have figured this out based on Daryl Surat’s repeated praise for the manga, but the series is Weekly Shonen Jump’s very own Inferno Cop — an otherwise hard-boiled story wrapped in layers of comedic nonsense. Saitama is a “hero for fun,” but he’s got a problem: he trained so hard to be a superhero that he lost all his hair and became the strongest man on earth. Being able to defeat anybody with one punch takes the spice out of life, though, so Saitama is holding out for a worthy opponent. The premise seems like it wouldn’t last beyond a single gag, but One-Punch Man has been thoroughly enjoyable for the past three episodes. Part of the appeal is Madhouse’s superb action animation, full of scratchy pencil animation, heavy perspective distortion, and stretchy, weighty motions. It’s frankly some of the best fight animation I’ve seen in years. Outside of that, though, One-Punch Man is a comedy series, and one that primarily takes aim at the stereotypes of shonen action and superhero stories, namely their predictable power dynamics and earnest heroes. A languid Saitama punches villains while telling them to pay for the roof of his apartment that they just ruined and panics about missing a supermarket sale while fighting genetically modified monsters. The combination of the mundane and the superhuman makes for a perfectly absurd action-comedy. It’s easily my favorite series this season. 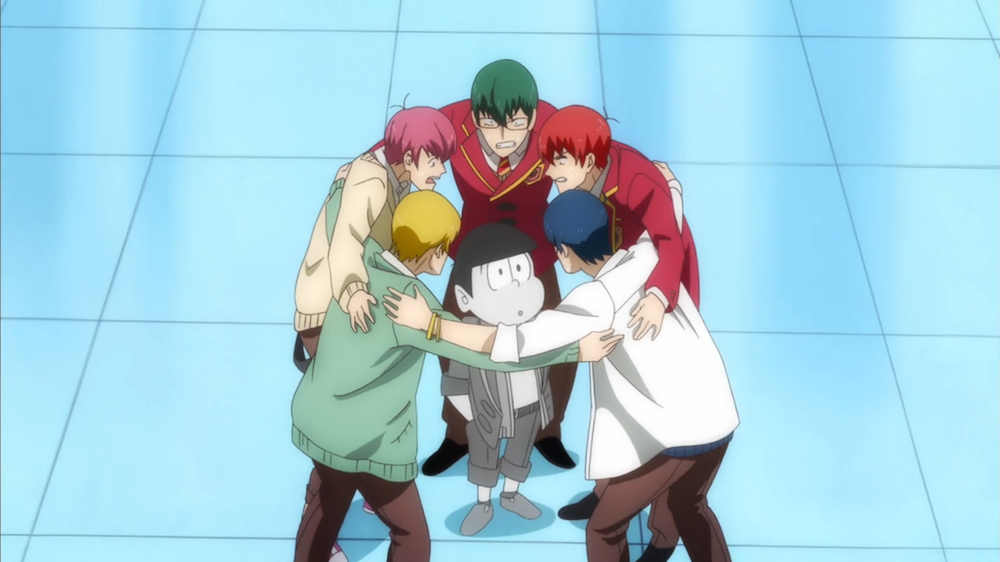 I initially wrote off Mr. Osomatsu as a cheap cash-in on an old gag manga character, but that's more a result of the original Osomatsu-kun, about the hijinks of a bunch of sextuplets, having never made it over to America (unlike contemporaries like Astro Boy and Doraemon). What's so remarkable about Mr. Osomatsu is that director Yoichi Fujita (Gintama) owns up to the title's origin as a slapstick comedy for kids and then deliberately takes it in a new direction. The first episode alone, with the brothers attempting to copy modern anime like Uta no Prince-sama and Attack on Titan in a self-aware attempt to rope in more viewers, is worth a watch on its own. The rest of the episodes aren’t quite as ambitious as the first, but they keep up the manic pace and inventive, surreal comedy. (Episode 3 is a series of totally unrelated short sketches.) And of course, in keeping with the spirit of Episode 1, there are references throughout to modern anime like Kaiji, Haruhi Suzumiya, and Kantai Collection. The visual style seems intentionally contrary to the original Osomatsu-kun’s simplistic black-and-white format, opting for bright colors and springy animation. It’s not quite enough to distinguish all the identical sextuplets, but I’m starting to figure out the differences between their voices and the way they carry themselves. Luckily I’m enjoying Mr. Osomatsu enough to keep trying. 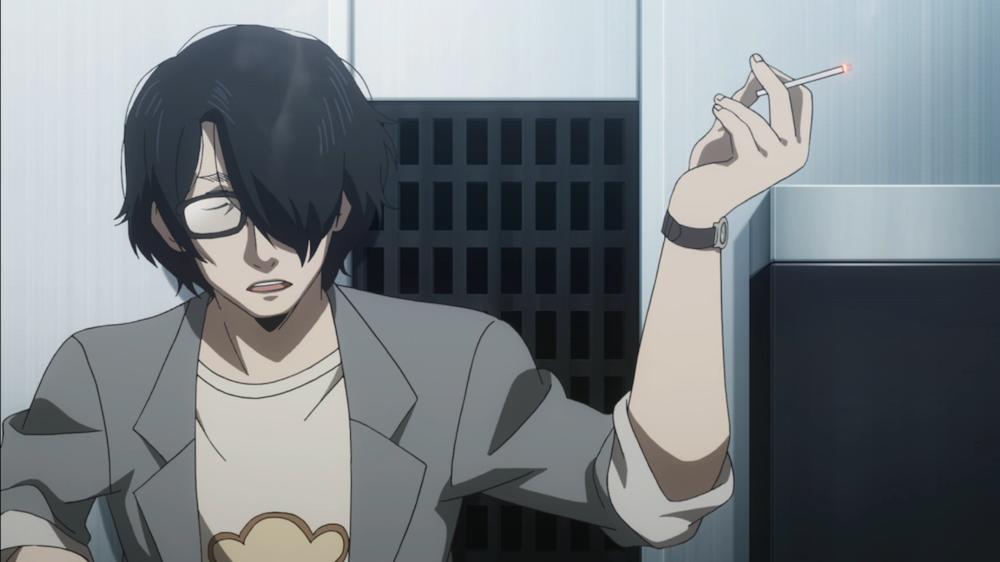 I have no idea where The Perfect Insider is headed, which is a wonderfully refreshing thing to be able to say about an anime. It’s not the kind of series that jumps out and grabs you — full of realistic character designs, subdued colors, and conservative staging — but Mamoru Kanbe (Elfen Lied) showcases a directorial discipline that keeps things moving at a slow and steady burn. The central mystery, a seemingly impossible murder in an isolated, high-security research facility, doesn’t even get started until a few episodes in, giving the series time to build up its characters and setting. The dialogue is full of subtle jabs and banter between the cast of clever intellectuals, giving it a flow that feels somewhat like an anime version of an Aaron Sorkin script (for better or for worse). The few hints the series has dropped so far have me excited for more. I just hope The Perfect Insider can keep up its momentum. 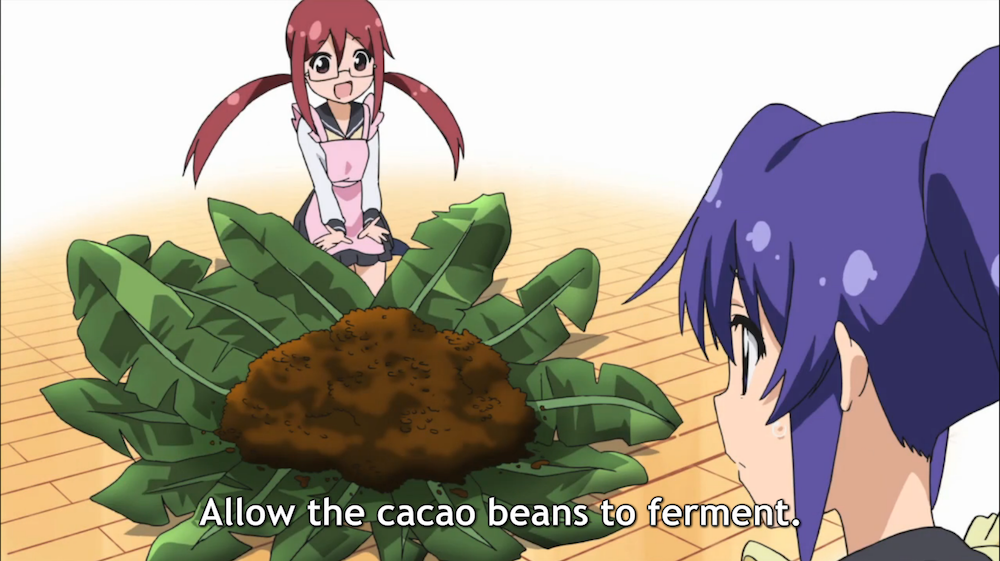 The Teekyu train keeps on a-rolling with no signs of stopping, and I couldn’t be happier. Every week the indomitable Shin Itagaki manages to cram more non-sequitur shouting and weird Japanese cultural references into two minutes than I would have ever thought possible … had I not been through five glorious seasons of this already. Millepensee is still handling animation, bringing their softer, more “moé” touch compared to MAPPA’s crude drawings in the first three seasons. Teekyu still has the best comedy bang for your buck in modern anime as if that was ever in doubt. 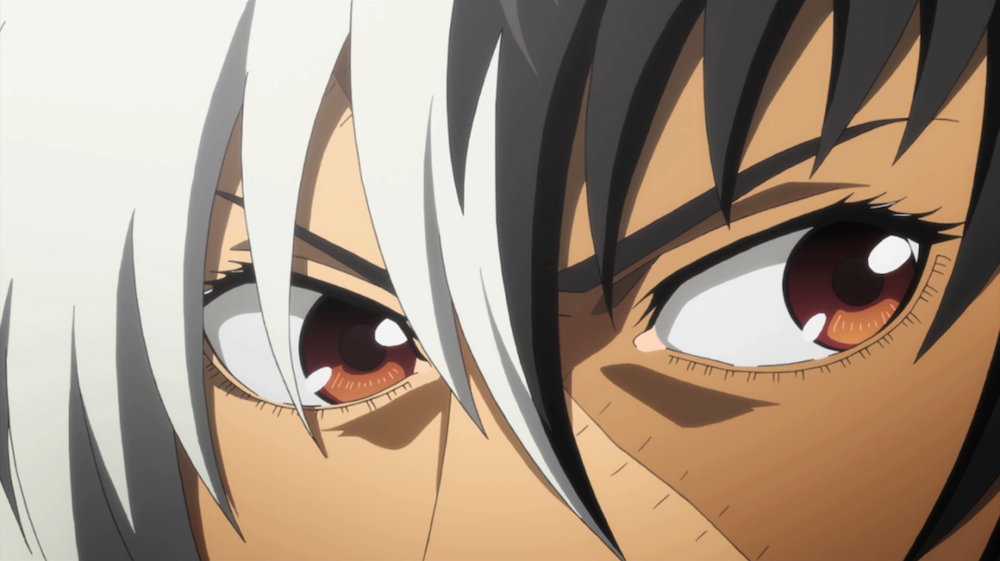 Is Young Black Jack a genius medical student with a troubled past or an up-and-coming Japanese rapper? This series suggests the former, though I’ll need more evidence to make up my mind. Young Black Jack has so far failed to achieve the succinct humanist allegories of Osamu Tezuka's original Black Jack, but that’s a high bar. The chief failing of this new series is its focus on the inner turmoil of Black Jack himself; any good fan knows that the real meat of Tezuka’s original stories is in the patients who open themselves up, literally and figuratively, to Black Jack’s moral judgment. At best, Young Black Jack is a cheap copy of the original; Episode 2’s twist ending is cribbed straight from the manga. At its worst, the series is a rambling, half-baked philosophy essay; Episode 3 is about Vietnam deserters but manages to somehow say nothing about Vietnam deserters. Luckily, the characters are all nicely designed — those of you into shirtless, scarred pretty-boy doctors can take that as you will, and it’s fun to pick out the characters from Tezuka’s Star System scattered throughout. I'm obligated as a Black Jack fan to keep watching, so I'll stick around.